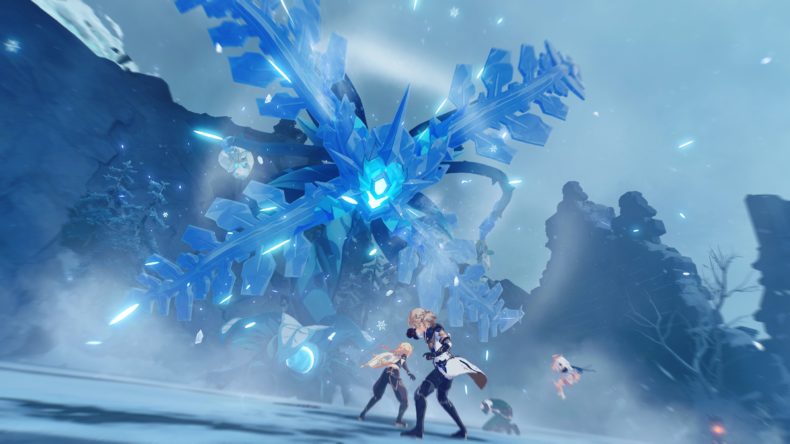 No content with being one of the best value Free to Play games of the year, Genshin Impact releases its first new map December 23rd. With snowy mountains and a new Sheer Cold meter to contend with, this seasonal addition looks to provide hours more entertainment.

“Global interactive entertainment developer and publisher miHoYo confirmed today that Genshin Impact’s Version 1.2 update, “The Chalk Prince and the Dragon”, will be arriving on Dec 23rd, and has revealed details about its first new map expansion, Dragonspine. Players will be able to begin an immersive journey full of new creatures, mysteries, treasures, and danger in the frozen realm of Dragonspine on PC, Android, iOS, PlayStation®4, and via backwards compatibility on PlayStation®5.

Genshin Impact is a free-to-play open-world action-RPG that brings players to the visually stunning world of Teyvat. The player takes on the role of the mysterious “Traveler,” who sets off on a journey to discover the fate of the lost sibling and unveils the mysterious secrets of Teyvat along the way. Currently, players can explore both Mondstadt and Liyue Harbor, two of the seven major cities in Teyvat, each with unique cultures, stories, and vast surrounding landscapes, and offering a diversity of creatures, monsters, secrets, and hidden treasures for players to discover. Further cities, stories, characters, and seasonal events will be released as the game progresses.

The Version 1.2 Update will bring with it the first new map expansion —Dragonspine. It is a frozen mountain range south of Mondstadt and home to plenty of unique creatures, a lost ancient civilization, bountiful ingredients, rare artifacts, and recipes for multiple 4-star weapons. Covered by snow all year round, Dragonspine’s extreme weather also challenges every Traveler to survive the biting cold. With a new Sheer Cold bar added, keeping warm becomes the most important thing that players need to keep in mind, whether in combat or exploration.”

I really enjoyed my time with Genshin Impact when I reviewed it earlier in the year, and may have to jump back in to check out this new area. If you can’t afford to jump into Immortals this December, you could do a lot worse than adventuring around the gorgeous world of Genshin Impact.