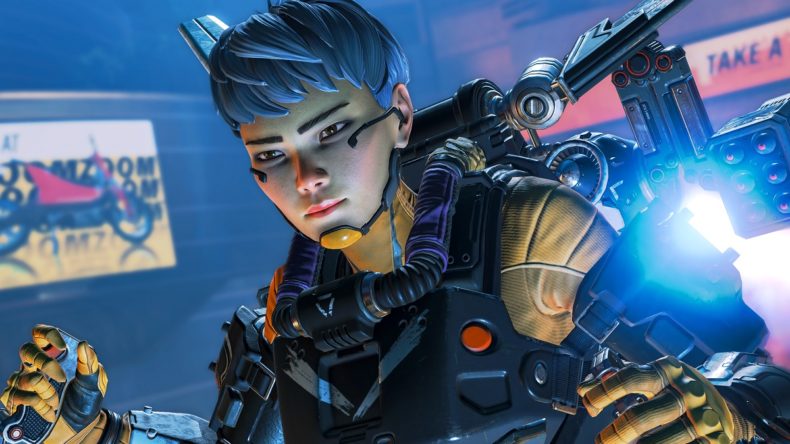 It’s been over two years since Apex Legends arrived on the scene. Since then, it has established itself as a fantastic battle royale title. Featuring tight combat, expertly designed maps, and a deep lore with its roots in the Titanfall series. New Legends have been added to the roster such as Loba, Horizon, and Fuse. There have also been new maps and weapons, tweaks to the gameplay, and much more. With a new season just around the corner, Respawn has given us an opportunity to learn more about Apex Legends Legacy. It’s a brand new update that brings an entirely new game mode to Apex Legends. On top of that, a new legend called Valkyrie is joining the fight.

At a recent hands-on session, the new mode was shown in all its glory, and we got to play a good chunk. The Respawn team talked about all the upcoming features. This included new mode Arenas, the inclusion of bows, an overhaul to Olympus, and new Legend Valkyrie. It was clear that Apex Legends Legacy is going to be a big deal. When Legacy launches on May 4, players will be able to dive into a new permanent game mode called Arenas. 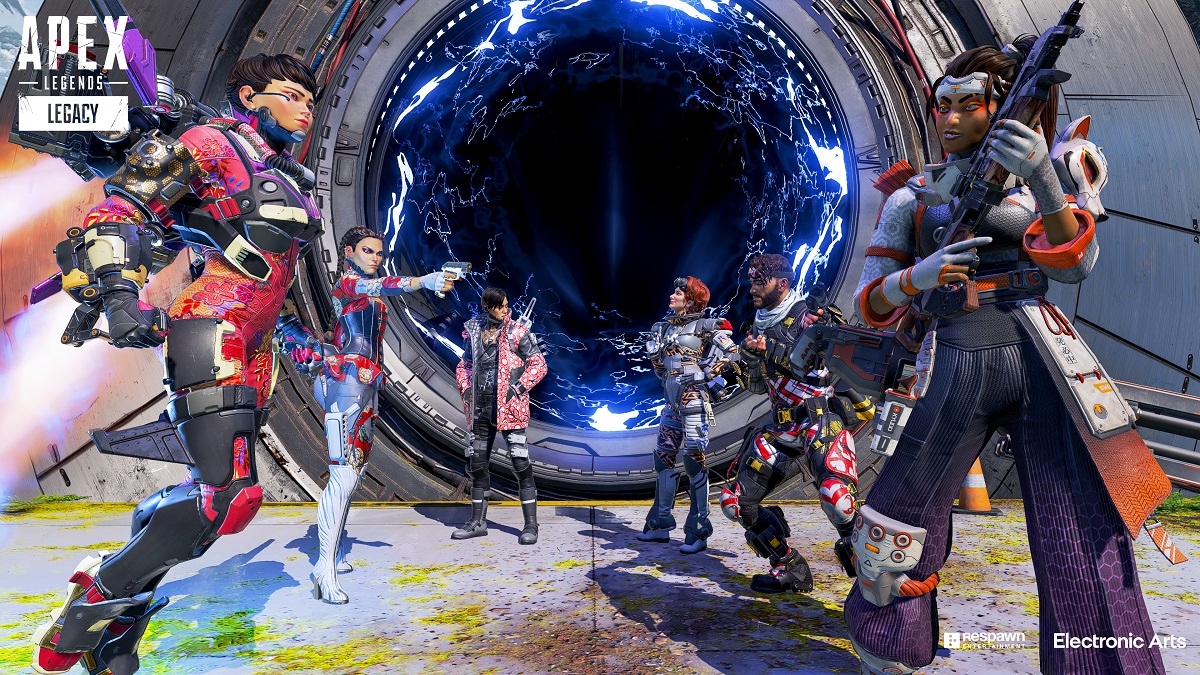 Robert West, the designer on Arenas said it started to take shape back in 2019. Originally it involved eight teams totalling 24 players battling it out on Artillery in King’s Canyon, with four 3v3 fights happening at once. That has now been stripped back to feature much smaller battles. It takes place in smaller sections of the various maps, where battles are intense and can be won in the blink of an eye. Players will take part in 3v3 battles over three rounds. Your opponents will remain the same until the victors win the most rounds.

What makes these battles unique is that loadouts are picked before each round. There is no looting whatsoever. As West put it, “you don’t want to pray to the RNG Gods.” A small amount of credits is available in the first round. In the planning phase (or Store System), weapons can be bought, along with consumables and extra uses of your special abilities. If a round is won, more credits will become available, allowing better weapons to be purchased or upgraded.

Credits will be gained from a loss, but will be considerably less. At the end of every round, players will lose everything and be required to spend credits all over again. Arenas gives team complete tactical control of how each fight is approached. It also gives players an opportunity to learn how the opposition plays over the course of the rounds. A player’s skill and strategy is paramount rather than random weapon or item drops. 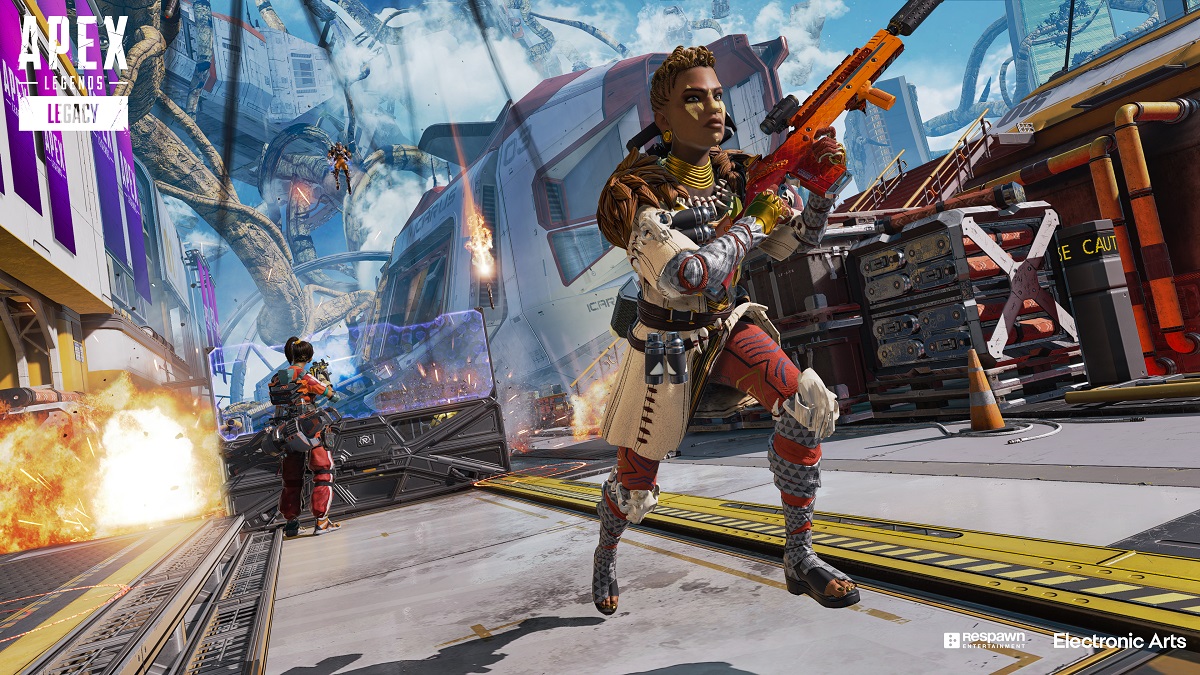 Victory is achieved by gaining a two-round advantage, so if it remains close, a total of nine rounds will play out. If by the ninth round the scores are tied, a sudden death round comes into play. It quickly became clear after playing that winning requires communication. Due to battles taking place in constricted areas as opposed to huge maps, there were fewer areas to use stealth. With all Legends being available assuming they’ve been unlocked, many tactical options are on offer. The play area still shrinks, so encountering the enemy happens much quicker. Arenas is fast, chaotic, and one hell of a thrill. Custom maps will also be available, bringing plenty of options to how each match unfolds. Care packages also drop into fights where some weapons and consumables can be swapped out.

When it comes to the various maps available in Arenas, Lead Level Designer Dave Osei talked about how to balance pacing with a number of factors, such as particular Legend abilities. Osei mentioned Bloodhound and the ability to use scan, and how it would be unfair to locate every opponent in each map. Respawn opted for pro-active play and how communication with teammates was vital to pick up the win. With much smaller areas, players may be able to spot where enemies were, but it was about factoring in where the circle forced players to, and how combat should be engaged. 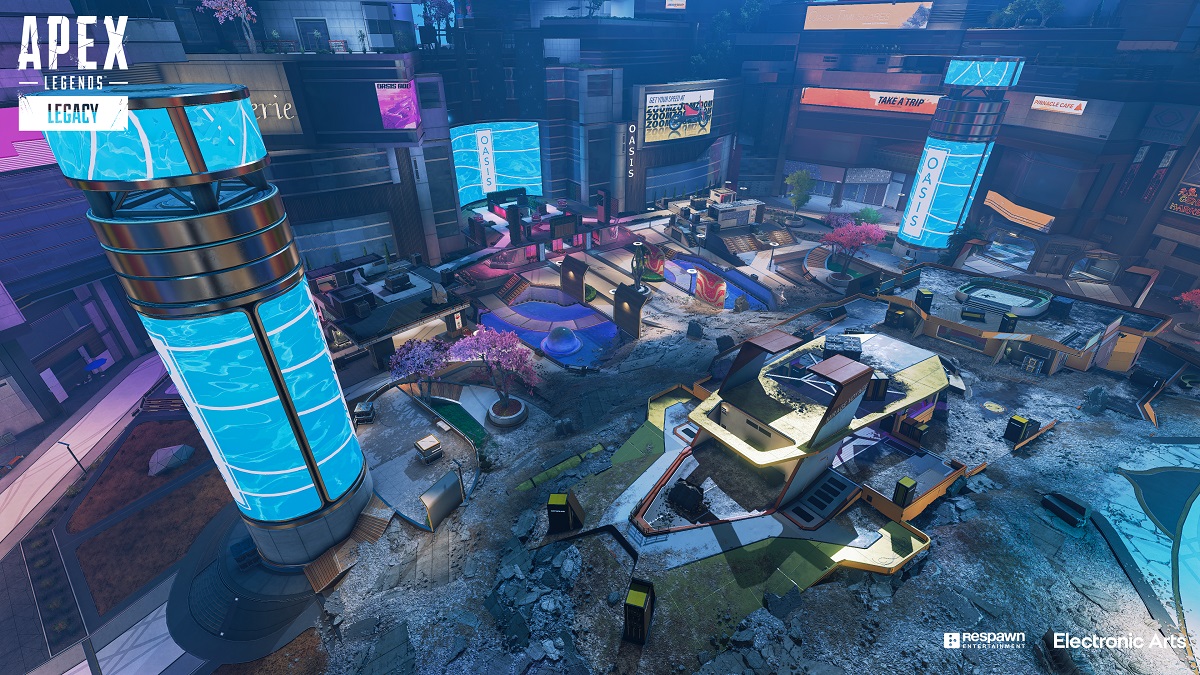 Two custom maps will be launching with Arenas. Party Crasher will “push players to make quick decisions within as many flanking options.” It features a plaza with two-story buildings, and a crash site where Mirage unsuccessfully landed his ship. Phase Runner on Olympus is “a hidden experimental zone on the peak of a mountain” with a big open area in the middle, providing a slower combat flow. Artillery from King’s Canyon, Thermal Station from World’s Edge, and Golden Gardens from Olympus will be brought in from BR to bolster the choices of maps in the early stages.

Another big feature of Legacy is new Legend Valkyrie. Daughter of famed Apex Predator Viper, her story was showcased in a new trailer where she holds a gun up to Blisk. We then saw a flashback where she’s a kid. Her father tells Kyrie “you are never flying one of these death traps.” Being the headstrong kid she is, Kyrie gets into her dad’s Titan, Northstar, and takes it to the skies. Up there, she encounters a battle in the sky. Her father heads up to save her, but crashes into the ground after ejecting her to safety. Although her father doesn’t die, he leaves anyway to go to war. She believes he left because of her, and she is clearly struggling to deal with it.

It cuts back to the present where Blisk tells her, “Your father never wanted you to live for him. He wanted your legacy to be better.” These words seem to motivate Kyrie to become a Legend. She tells Blisk her call sign will be Valkyrie, cut with footage of her building her own equipment from the remains of Northstar. It was a cool trailer, further bringing the Titanfall universe into Apex Legends. 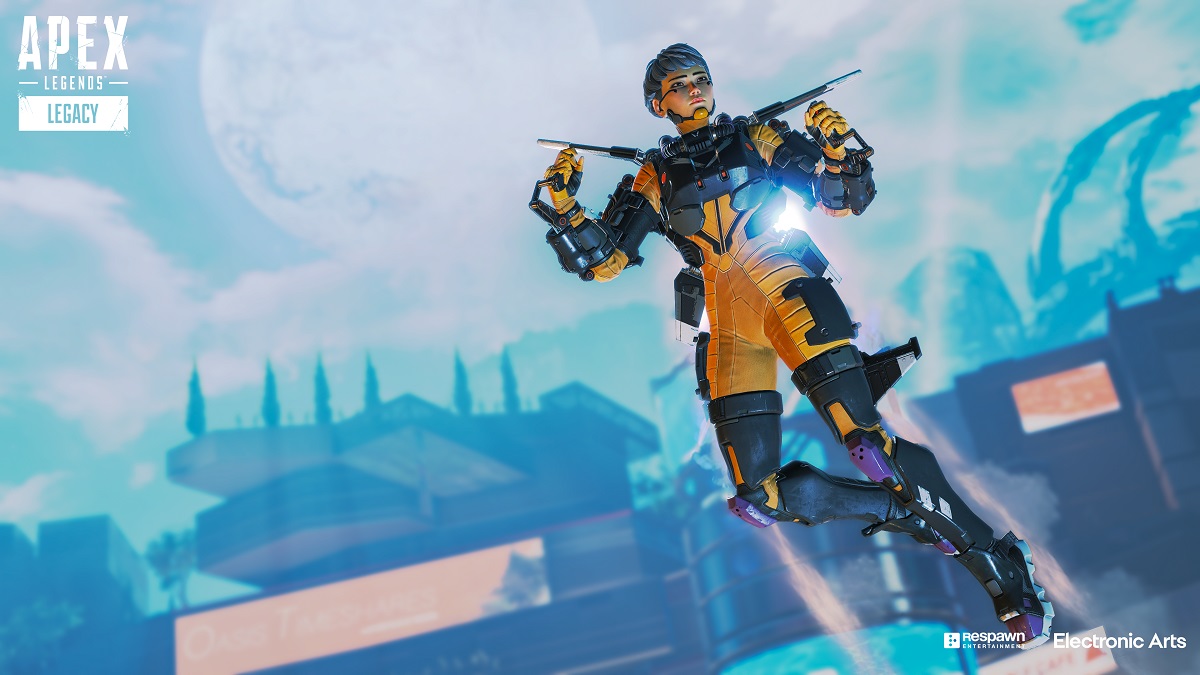 I got to play as Valkyrie in the hands-on preview, and she is more than awesome. Her biggest and best attribute is the jetpack, allowing the use of air combat and exploration. Lead Game Designer Daniel Klein said, “from day one it was clear we were building the entire kit around the jetpack.” We saw another trailer that highlighted Valkyrie in all her glory. She’s brash and cocky, but so damn cool.

Everyone loves a jetpack

Klein further detailed the balancing of Valkyrie. Using a jetpack is awesome, but it would be unfair if you could do so all the time. There’s a limit to how long movement in the air lasts. Fuel does refill over time, but the resource is finite. Pressing jump twice sends her into the air. Valkyrie can fly directly up, or by pressing the left trigger she’ll fly forward. Whilst playing, it helped to scan the environment and see where opponents were, but it also gave away the position.

The VTOL Rockets (jetpack) are loud as well, so the balancing in that respect will highlight where Valkyrie is in range of other players. Her Tactical Ability is the Missile Swarm. Firing 12 rockets in a grid can do damage to opponents, but more than one rocket doesn’t do damage. It is more “cosmetic,” according to Klein. They are primarily used to stun or flush out enemies from their hiding position.

Skyward Dive is her Ultimate. This is highly useful, but it requires communicating with your teammates. What it allows you to do is take your teammates away from a heated battle by pulling them away and relocating them a significant distance away. I never got to use her ultimate because it was hard to orchestrate with strangers, but in a match with friends, it’s going to be a gamechanger. She’s a fantastic addition to the Recon class. Time will tell how she plays out in BR, but in Arenas Valkyrie was a key component. 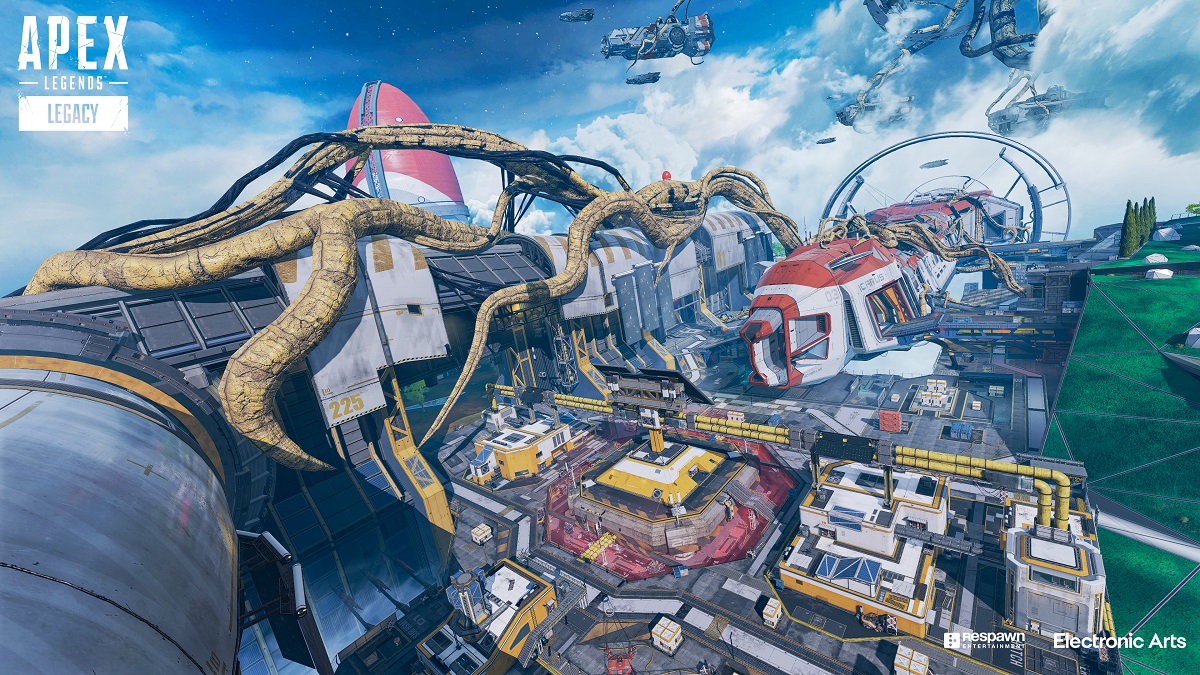 The big change to the Olympus map in BR come from criticisms about a lack of POIs (points of interest), according to Dave Osei. Icarus is a ship that has docked on Olympus, bringing with it a “parasitic plant of unknown origin.” The plant begins to take root and cover a lot of the map. Players will find corpses on the ship, with one body containing a key card. If found, it’ll grant access to some special loot. Of course, if resistance is encountered, the card can be stolen and used by other players. There have also been some changes to the placement of balloons, with two being removed in Golden Gardens to slow down pace, and Orbital Cannon because of the Icarus.

The final big change coming in Legacy is the addition of the Bocek Bow.The Bocek is a medium-range precision weapon. Using it in my playtime was a lot of fun. Whilst it requires a steady hand and plenty of accuracy, it does a decent amount of damage when the arrow lands in an enemy. One of the best features of the bow is the ability to pick up arrows that have missed your target. They can also be recovered from dead enemies by grabbing them from their Death Box. 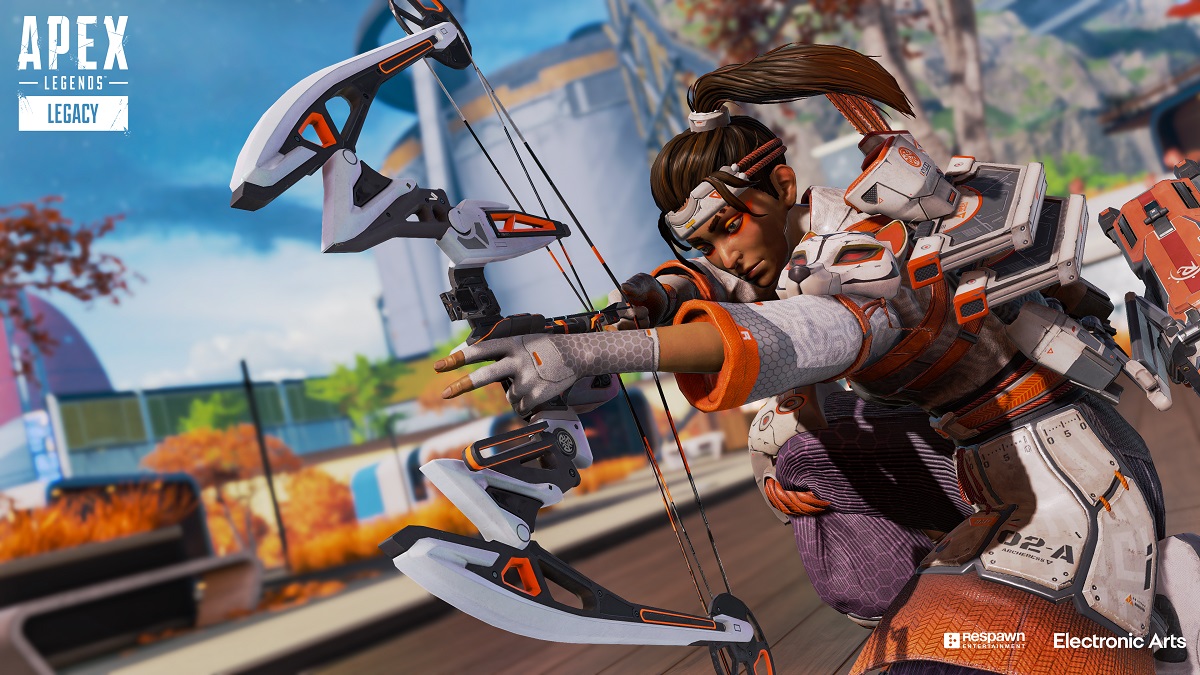 It’s much quieter than using an assault rifle or SMG, but it isn’t silent. It comes with two Hop Up slots which allow you to modify the attack, the first weapon to do so. The first is Shadow Caps, turning arrows into shotgun shots that break up into multiple projectiles. This is perfect for close-up attacks. The second is Dead Eye’s Temple. Once you find a rhythm with the maximum draw of the bow, it makes shooting and drawing a lot quicker.

More than just an update

Apex Legends Legacy is a huge update, where all the additional features make a massive difference to how the game will play in the future. Arenas is a fun mode that will be perfect for skilled players and well-orchestrated teams. The use of the Sort System means each round can play out differently. It also allows for real strategy to be the difference bettween winning and losing. Valkyrie is a solid addition to the cast of Legends, who’s abilities feel both balanced and game-changing. The new bow is tricky to master, but by the end of my hands-on I was a firm fan of the weapon, with the two modifications to combat making it a versatile and fun weapon to use. Going forward, I may have to drop Bloodhound as my main, because Valkyrie is an absolute badass.

Video games are cool. Don't let anybody tell you any different.
MORE LIKE THIS
Apex LegendsEALegacyRespawn