previous
Puzzling platformer Blitz Breaker smashes onto consoles
random
next
Stack your way up to glorious heights with Stack Up! (or dive trying)
0 comments 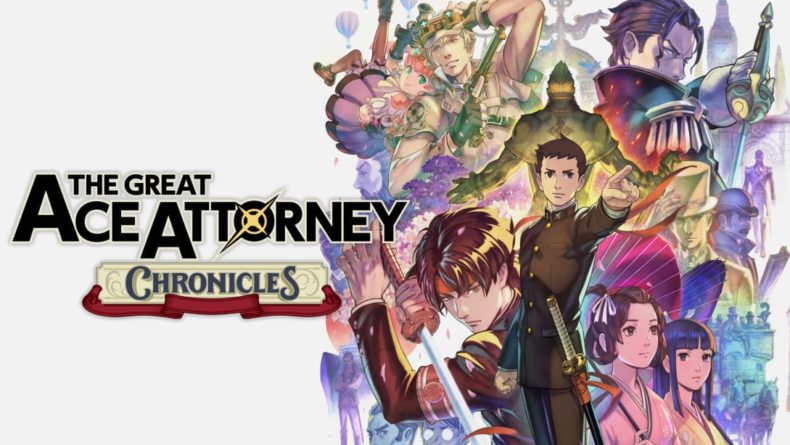 The fact that there exists a long running video game series where you play as a defense attorney is exactly why I love the hobby. The outlandish adventures of Phoenix Wright were where my love affair with Ace Attorney began – but even as protagonists have come and gone, protecting the innocent continues to make for utterly compelling adventure gameplay. This time around Ryunosuke Naruhodo makes his debut in the courtroom, in the delightful backdrop of Victorian-era London.

The Great Ace Attorney Chronicles is a remastered collection of two games released previously in Japan in 2015 and 2017. For this preview I was given access to 3 cases from the first game. But the full game will contain 10 to solve as well as some side stories, snazzy costumes and other bonus content for series fans.

Ryunosuke begins his courtroom journey in tumultuous circumstances, when he’s accused of murdering a proffesor with several eye witnesses. With the help of his best friend he is forced to navigate the new court system of Japan and prove his innocence. The plot only gets more intense from there, as our hero embarks on an adventure to England to learn from the finest legal minds in the world. 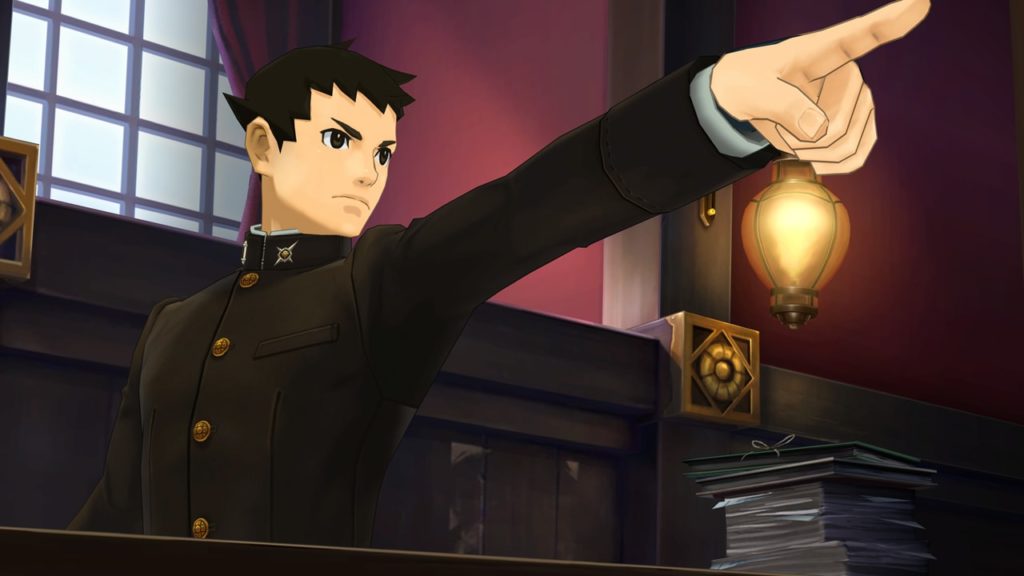 If you’ve played an Ace Attorney game before then you’ll likely know what to expect from the courtroom. Witnesses will take the stand, and it’s up to you to cross examine them. Each statement they make can be pressed for more information. But if you notice something that contradicts with your evidence you’d better be ready to shout Objection. You feel like an utter genius as you start putting the pieces of a crime together. The Great Ace Attorney Chronicles does a fantastic job of leading you down that path without holding your hand too much.

There are a few new elements to courtroom battles in The Great Ace Attorney, and so far I’m a huge fan of all of them. The first of these is that you can have multiple witnesses on the stand at the same time. This doesn’t just mean that you get to enjoy more than one colourful character at once. It also gives you an extra person or two to keep an eye on. When one witness says something another disagrees with they’ll visibly react. And if you call them out on it you’ll probably learn something crucial to the case. 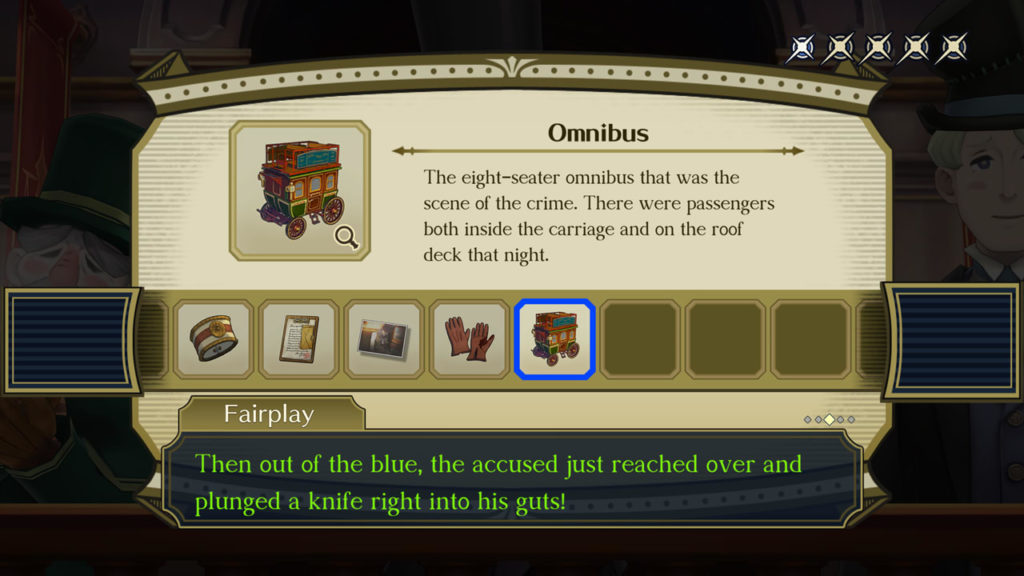 Another new addition to the courts are the jury. As the case is proceeding, these 6 respected citizens will let you know if they think your client is guilty or innocent by throwing a flame into different sides of the scales of justice. If all of them agree the unlucky sod is guilty (which they will) you get one final chance to change their minds. Each juror then gives you a reason they’ve decided your client is a wrong’un. And to convince them otherwise you’ll need to figure out which statements don’t add up. Navigating the choppy waters of the courtroom is always so intense. It’s packed full of more twists and turns than Blackpool Pleasure Beach.

Panic on the streets of London

Although you’ll spend plenty of time in court, there are also sections of the game that see you investigating the streets of London for evidence. Each area you visit can be investigated for clues in a traditional point and click fashion. These usually have a person or two to question too. By presenting different items to the many oddballs you meet you’ll find out more about the situation that’s unfolded. Then, eventually, you will be ready for court.

All in all, the overall charm of The Great Ace Attorney Chronicles is simply off the charts. Every single character you meet has a huge personality. Whether it’s a nervous top hat salesman or a fish and chip flaunting police officer. As you ask them for more information, or even accuse them of lying, they react with some truly over-the-top animations that had me laughing out loud on multiple occasions. 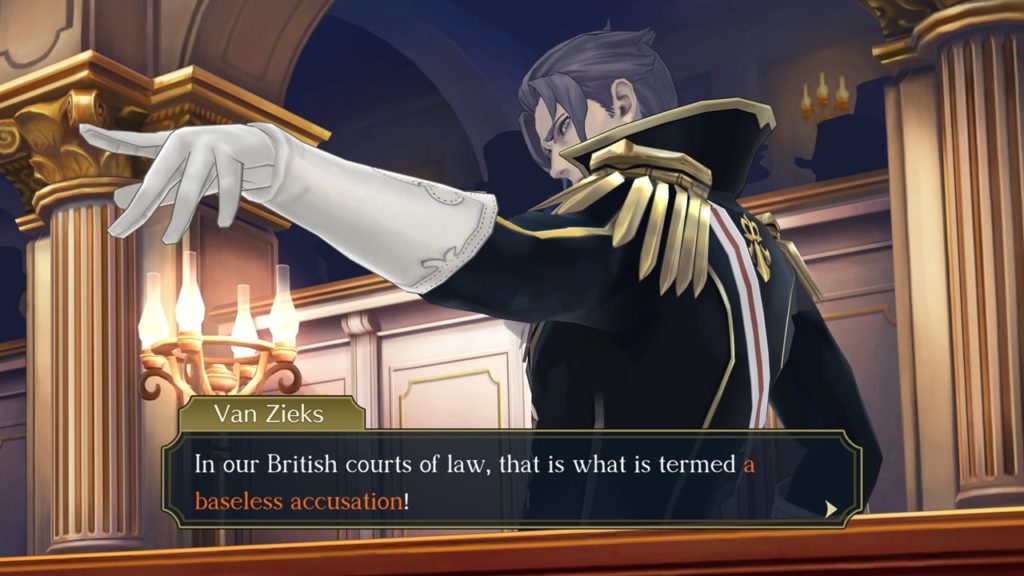 I was slightly worried the 3d models wouldn’t have the same flair that the old 2d art did. But really, I had nothing to worry about. The Great Ace Attorney is simply a gorgeous game, from the characters and backgrounds to the font and menus. The soundtrack is as catchy as ever too, with plenty of tense courtroom tunes to get stuck in your head.

The localisation of The Great Ace Attorney Chronicles is frankly some of the best I’ve ever seen. Be it the small amount of voice acting in anime cutscenes or the care put into using the text to showcase each characters’ unique British accent, the work that has gone into preparing this game for a western audience is absolutely impeccable.

The Great Ace Attorney Chronicles has its hooks in me already. Whenever I wasn’t playing it I was wishing I was. The individual story arcs of each case I’ve played so far are just so engaging. But the overarching narrative has me more than intrigued by what’s yet to come. The new elements to the court are all really interesting, and the characters are as outlandishly delightful as ever. I cannot wait to play to more next month.

The Great Ace Attorney Chronicles is out on July 27 for PC, Switch, and PlayStation consoles.