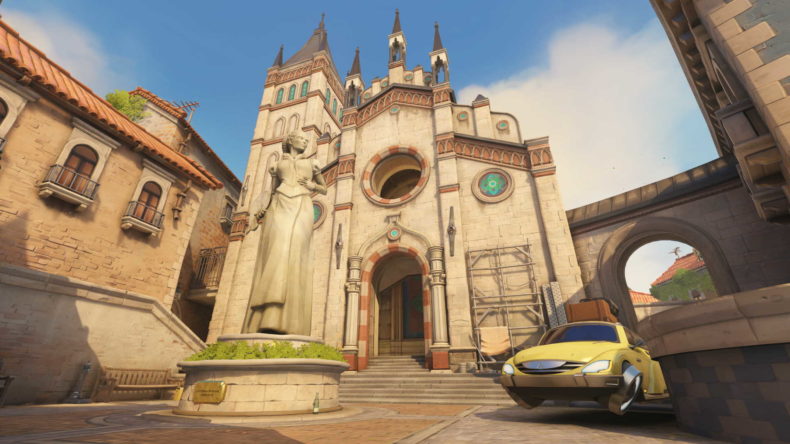 A brand new Overwatch map called Malevento has launched for the beloved game, and is available as part of the free-for-all deathmatch mode on PlayStation, Xbox, Nintendo Switch, and PC formats right now.

Blizzard has revealed all about the Overwatch Malevento map on it’s official blog, with a senior developer saying:

“Malevento’s design history begins in Rialto, an Escort map first introduced to players in the “Retribution” Archives event. The team originally considered making Malevento an extension of the existing map, but pivoted away from the idea when another concept was proposed: an idyllic hilltop town nestled in the quiet Italian countryside. We looked at medieval towns for inspiration, Picturesque Tuscan villages like Montepulcian and Pitigliano, renowned for their lush landscapes, maze-like streets, and tucked-away feeling, inspired the artists and designers seeking to capture the same quaint atmosphere with Malevento.

Like each map before it, Malevento is an experience packed with little details and hidden references–particularly for players looking forward to Overwatch 2. Why is Talon setting up shop? Who is the mysterious statue in the courtyard? Talon’s base, secreted away inside a villa built by a contingent of workers who have since mysteriously disappeared, rests within Malevento like an ill omen, their plans for the town yet unknown.”

Interestingly, this is the second Overwatch map the team has designed since working from home due to the global pandemic.

“As the second Overwatch map created entirely by developers working remotely, Malevento is a love letter to many team members’ dreams of post-pandemic trips and a means of transporting players into those Tuscan summer fantasies alongside them. Whether it’s slinking through the town’s mid-renovation cathedral, trying to glean new bits of lore from the bric-a-brac in Talon’s secluded base, or scoping out each of the prime boop locations, there’s something new for every type of player to enjoy (between bouts of high-octane brawling, of course) on Malevento.”