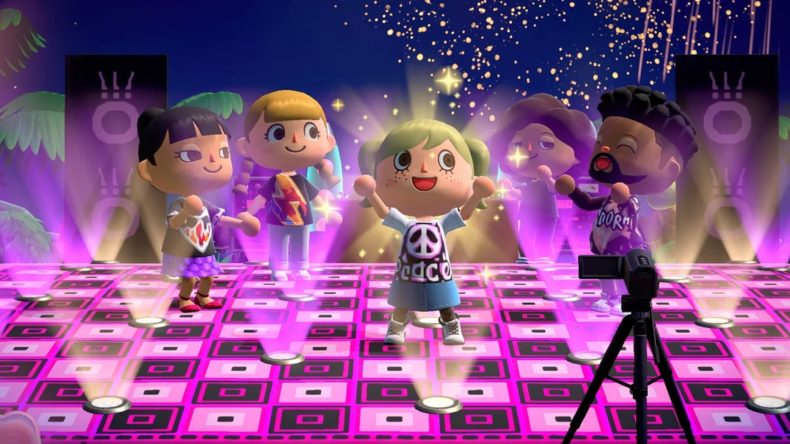 The levels of customisation in Animal Crossing New Horizons never fails to impress. Not only are there tons of items you can spend those hard-earned bells on, the pattern designs allow creative minds to come up with some truly remarkable patterns. In support of a new collection of jewellery coming from Pandora known as Pandora ME, gifted YouTube creator Blarla Button has designed a unique and wonderful island in Animal Crossing New Horizons based on Pandora ME. On September 30, the collection will launch alongside new global celebrity ambassadors including singer Charlie XCX, actor and Tik Tok star Addison Rae, Canadian dancer Donté Colley, British singer Beabadoobee, and Italian Tik Toker, Cecilia Cantarano.

The island of Pandora features buildings based on each of the celebrity’s campaign videos and more. These include a chilled hangout, a dancefloor, a diner, a stunning water garden. I was lucky enough to get to chat with Blarla as she showed me around Pandora, as well as Lauran Carter, head of comms at Liquid Crimson. It’s such an impressive place. Each building pays close attention to the themes of Pandora ME. Blarla’s love and knowledge of Animal Crossing has clearly helped her build such an awe-inspiring island. It was a joy to get to see every facet of it. After flying over and seeing how colourful and lush it was, I finally arrived on Pandora. Our first stop was The Factory, inspired by the real life Pandora factory in Chiang Mai in Thailand.

The actual offices feature beautiful plants to reflect the tropical nature of the factory. Blarla has managed to do a fantastic job of recreating it, making use of actual Animal Crossing items like work benches to create the main factory. “We have three areas, the main factory being at the back where they are producing the jewellery where we keep the raw materials that need processing to be made into lovely things.” To the right of The Factory are the design offices, with replicas of pieces featured as part of Pandora ME on display.”

“Some of the design pieces you can see – the pixel art on the desk there and also the display – we’ve done a necklace display on a hat stand. They are based on pieces that are part of this jewellery line.” On the walls are some impressive paintings that bring the room to life, and it was interesting to find out what they were based on. “We actually have some pixel art on the walls as well of the influencers and talent that has joined the project. It really is starting from The Factory in our little design studio there.” 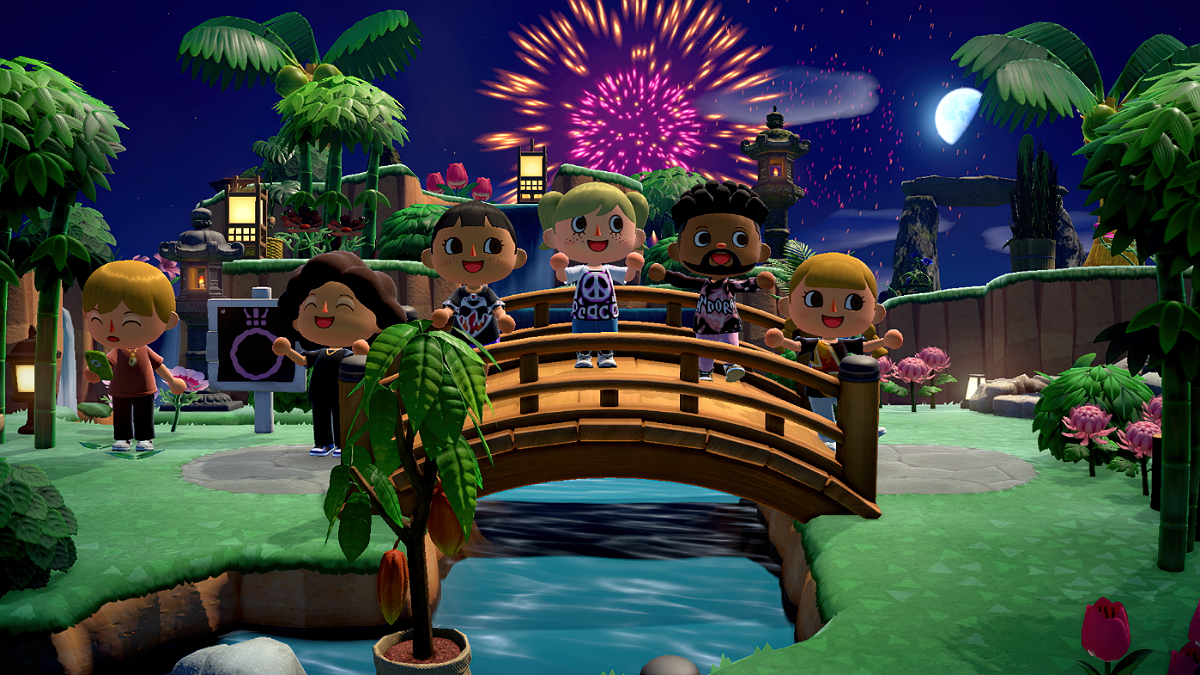 Pandora care a lot about taking care of the environment, and their factory in Chiang Mai fully supports this notion. Lauran explained, “it’s of the highest standards, is how it’s described, but really serious about sustainability, energy saving. Using eco-friendly resources, solar power, collecting rain water to kind of keep the factory running etc. It’s really worth looking into.”

Blarla brought my attention to the map of Pandora Island. Even the detail as to where buildings have been placed, and the general layout of the island has been intricately designed. “I’ve tried to bring an element of their chain link charm bracelets to the island. We have lots of charm-esque circles, with the houses being like their mini-charms. I’ve tried to bring some of the jewellery to the design layout of the island. We even have the little Pandora crown up top in the middles of the island there. You can see that we’re at the front of this particular chain link, you can see that the houses are all in a circle here.”

Pandora Island: A gallery of wonder

Before we had a look inside the houses, we took to the dancefloor, complete with a DJ booth. I was a bit gutted I didn’t take part in the update that gave me dance moves, but those of you who did will be able to dance your heart away. It’s remarkable how cool it looks, with blank and pink tiles and bright lights, complete with Pandora logos surrounding the area. We headed to The Gallery next, and it was filled with pieces of jewellery from the collection.

“This is where we are showing off a lot of the design pieces that we’ve put into the game,” Blarla told me. “We’ve taken inspiration from the jewellery line and created pixel art, and placed it in this gallery, with a few other Animal Crossing-esque items as well. room.” Some of the paintings on the wall are incredible, especially as the pixel artists only have 32×32 grids to work with. “Our fab pixel artist Jason has designed these pieces so that I could draw them into the game. He helps me every step of the way with that stuff.” Blarla used hats to create the display stands for the jewellery, and recreated “actual pieces from the line on them as though they are being displayed.

The Rooms of the celebrity ambassadors

The Factory and The Gallery are the two main houses on the island. Both are beautiful, with so much work being put into both. Following my visits of them, I got to check out the houses that are inspired by the celebrity ambassadors of the Pandora ME collection. “There rooms are based on campaign videos that they have been doing for the Pandora ME collection.” Beabadoobee’s house features a music studio to reflect the singer-songwriter’s profession. It includes a pink guitar and amps, as well as a black drum kit, where players will be able to rock out. 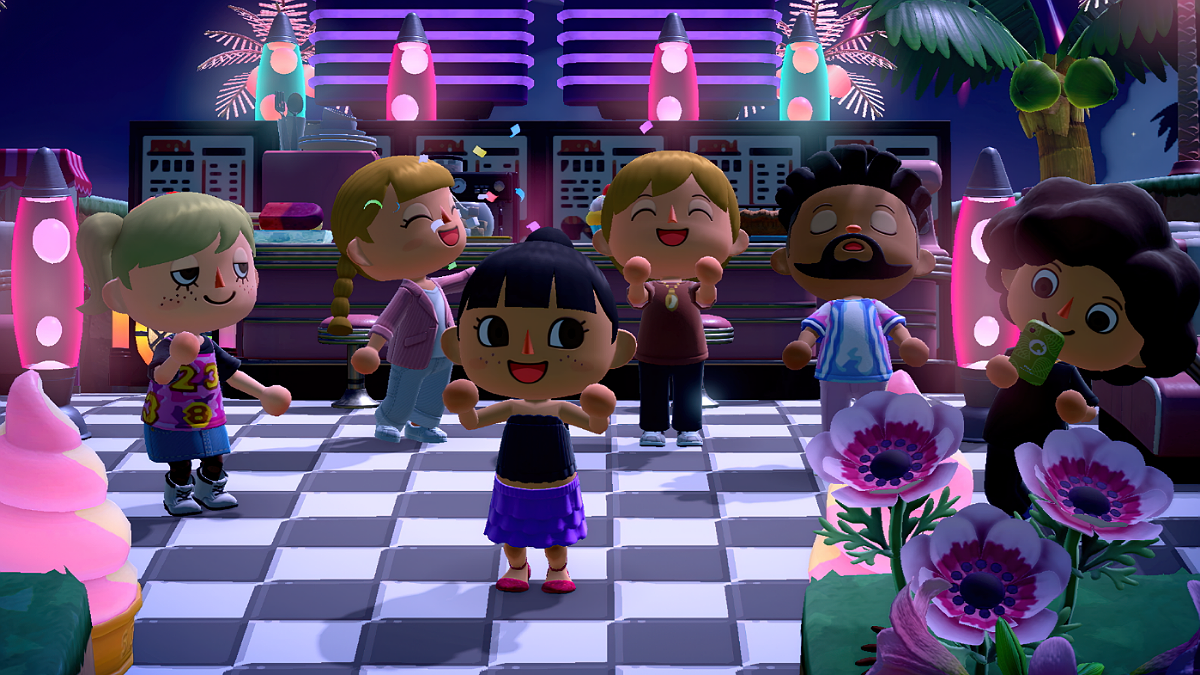 The rooms inspired by the celebrities are amazing. Lauran was a big fan of them, especially Beabadoobee’s.  “They are all fantastic, of course, and the outside areas too, but I think this is my favourite. Just how well it’s mimicked the campaign advert with the cherry blossom and the pink, and all the musical bits and pieces that you can pick up in game anyway. It’s just perfect.”

The Green Room, belonging to Charlie XCX, focuses on pink lighting, mirrors, and clean white surfaces. Donté Colley’s room features the mirrors that appeared in his campaign video, and Blarla has done a great job trying to mirror (poor pun, I know) it, especially as Animal Crossing New Horizons doesn’t have mirrors. The last house belonged to Cecilia Cantarano, featuring lots of lights to allow people to take lots of selfies. It features a camera, a white light to help illuminate the place

“The houses – even though they’re a single space – they can take 10 hours, which may seem like a lot for what doesn’t seem to have a lot in it,” Blarla explained. However, she had to order in all the parts and make sure they were faithfully recreated. All in all, the entire island took over 200 hours, purely on the build itself. It’s clear the time was spent well, making sure every inch of Pandora Island reflected the collection, not just in the actual line of jewellery but in what it represents: freedom and self-expression.

If players arrive via Dream Codes, they get party poppers and sparklers to play with. Not only that, the new Sanrio characters live on the island. Many Animal Crossing New Horizons players might not have been able to meet Rilla, Marty, Étoile, Chai, Chelsea, and Toby yet. We said hello to the new gang then went to the Arcade Hangout. “It’s got a bit of a club vibe about it,” Blarla said. “I thought it was a nice opportunity to have a large Pandora logo as well.” The logo separates the arcade machines and the luxurious pool area. 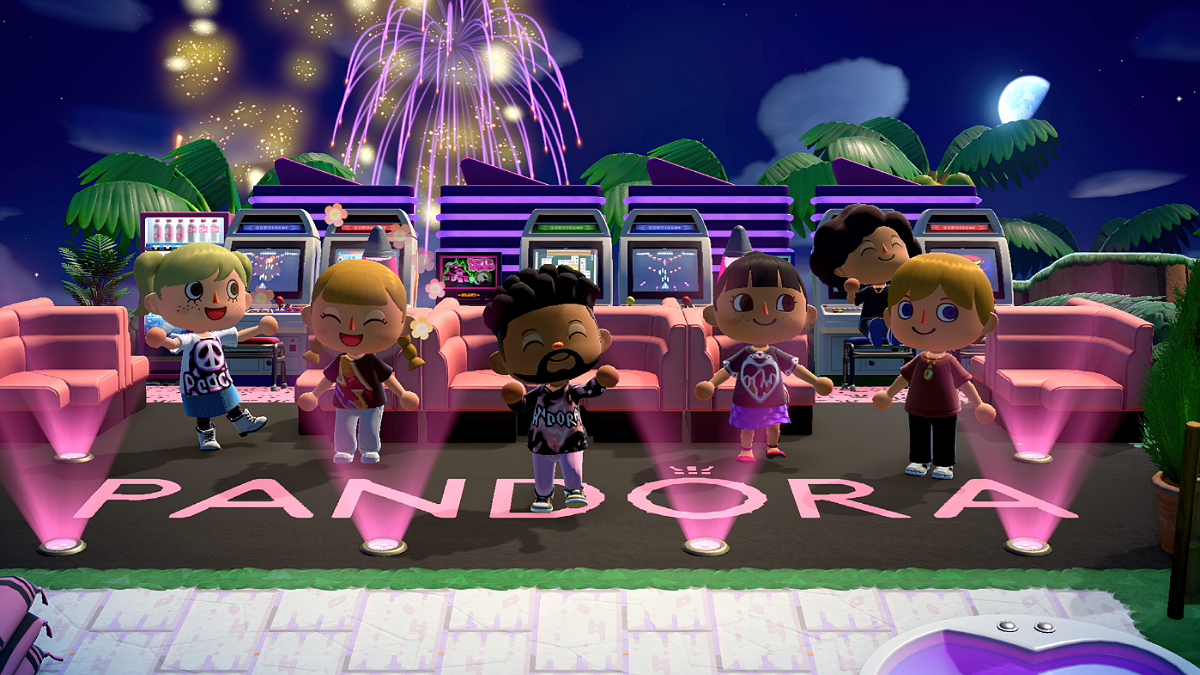 There are loads of awesome arcade machines for people to have a go on. Lauran pointed out they weren’t just there for show. “Beat all the celebrities top scores, that’s something you can do here. All the guys who live on the island must have top scores logged in every single one of these machines, and your job is to replace them.” The pool area is incredible, featuring an actual Animal Crossing pool, as well as a pixel art design meticulously created.

Pandora Island: Time for a snack

North of the town hall and up some stairs is the Pandora diner with an American diner feel. It features tons of food that has been found and saved from previous events in Animal Crossing New Horizons. “Food is one of those items in Animal Crossing that they keep releasing new food items. It’s a question of ‘hang on, what have they released recently? What came out in that event, and what came out in that event?’ You’re just trying to figure out all the best bits that could work in the diner.” There’s pies, donuts, and other finger food that complements the space. It looks amazing, especially how both compact and open it is. “You wouldn’t believe the levels of approval we went through internally with the food,” Lauran joked. “The amount of conversations about what would be just right.”

My time on the island was almost up, but not before checking out some of the more scenic areas Pandora had to offer. We headed through one of the animal’s village, complete with their own vista, and walked across paths surrounded by colourful flowers and plants. Across a bridge was the second set of animal houses. Both are linked together like the charm bracelets, as they feature prominently in the collection. There was a gorgeous sunken waterfall and water garden area that look so peaceful.

The final feature on Pandora featured a motif that appears in some of their jewellery: the crescent moon. On the island, a big pink crescent moon is free to sit on, allowing players to take a breather after all the exploring. It really is an incredible design. Every facet of the island has been crafted with a lot of love, care, and attention. Players who love the Pandora brand, and the upcoming Pandora ME collection are going to have a blast. Pandora Island is so pretty, and it was just as important to connect with Animal Crossing fans as it was to support the Pandora ME collection. Lauran summed the beliefs of the creators up perfectly.

“Our aim is not just to, of course, with Pandora, working with Pandora and wanting to create something that mimics the feeling and the ethos that they’re doing is a huge priority to us, obviously. The other part of the priority coin as far as we’re concerned is to make sure we’re engaging the Animal Crossing audience. The Pandora ME line is very much about creativity and expressing yourself, and really being able to tailor something to your preference. We really hope the Animal Crossing community can pick up on all those little extras that we’ve added, and things that only the community will understand.”

Video games are cool. Don't let anybody tell you any different.
MORE LIKE THIS
Animal Crossing: New HorizonsPandora