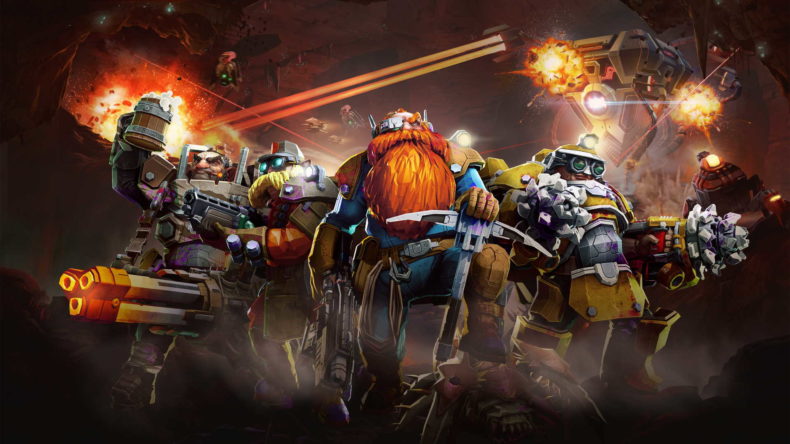 Before we get started, if you haven’t played Deep Rock Galactic yet, then please rectify your mistake. I don’t like being confrontational, but in a world where so many titles are released every week, I wouldn’t blame you for missing this one. That said, go play it, now. Then come back, because the chances are that after a few hours with friends mining and shooting, you’ll be as big a fan of the game as I have become.

There’s a reason is made it onto mine, and Chris Hyde’s Game of the Year list last year. It’s brilliant, slept on, available for free on Game Pass for Xbox and Windows, and does absolutely everything right to create an engaging co-op experience. Oh and it’s just got a lot bigger thanks to the first ever “season”, which is hitting the experimental build right away.

Deep Rock Galactic: What are Seasons?

So seasons are here, and are tied heavily into a new form of currency along with an XP bar, called “Performance Points”. Now, when you finish a mission (any mission), you will be awarded performance points based on things like difficulty, performance, and challenges. There’s a new seasonal terminal which allows you to track progress, and there’re 100 levels of what Ghost Ship Games themselves referred to as a “Battle Pass” setup, when they walked us through the new content, before I had a chance to play it myself. 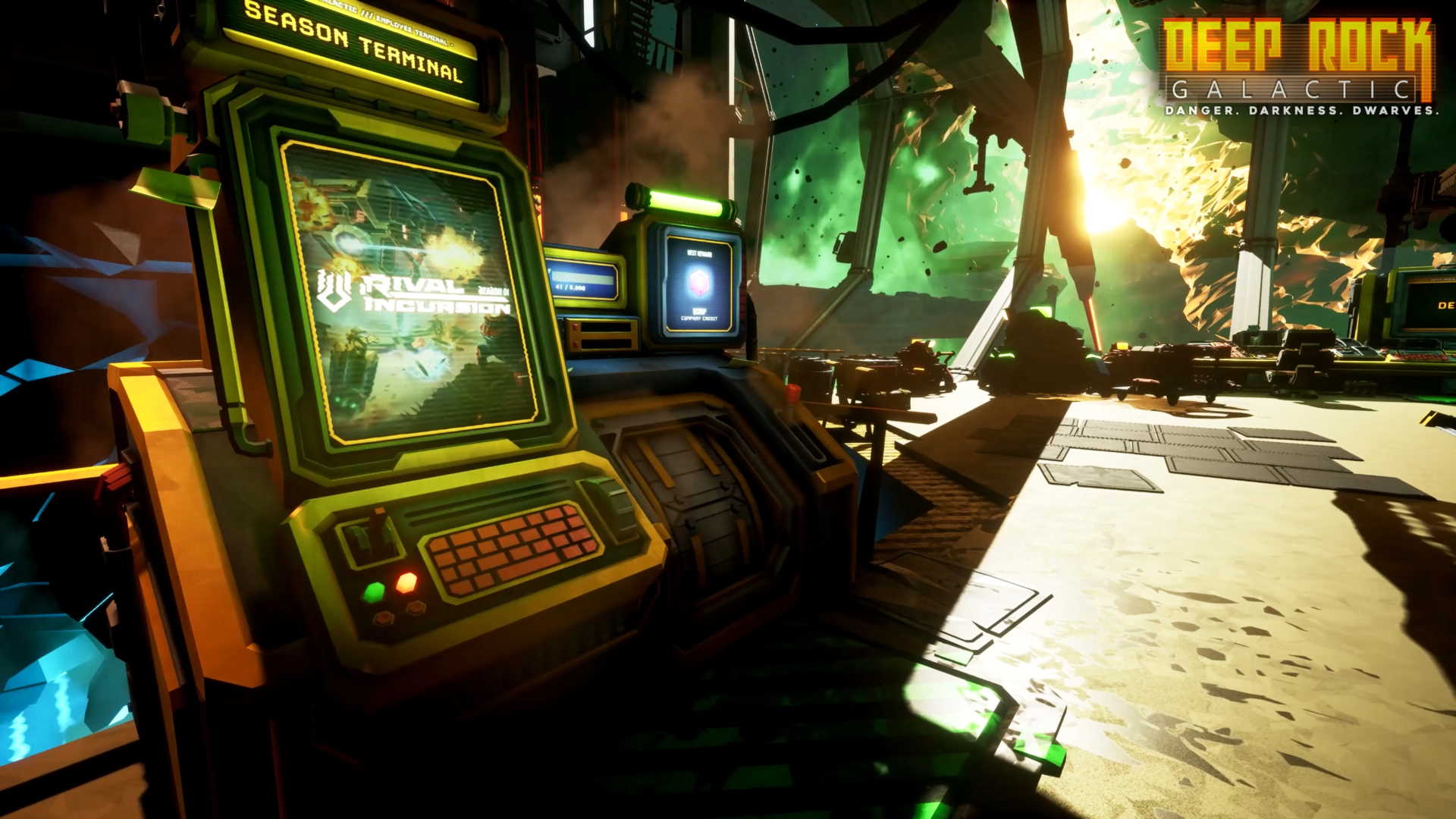 The levels themselves vary from just granting you scrips (tokens that let you unlock items on a cosmetic tree, which we’ll come to), and other levels will give you direct cosmetic rewards such as new beard or hair-styles. There’s paint jobs, cash itself, and crafting materials: all of these are rewards as you go through the 100-level-long battle pass, which is completely free, by the way.

A skill tree for cosmetics

The thing is, Ghost Ship Games don’t want to make the game imbalanced, or ruin the core of what makes it fun. That said, the team is also very aware people love customising their Space-Miner-Dwarf. The cosmetic tree is bloody massive, and if anything, might actually be too big. A glance at it after a single mission left me without any scrips to spend, and still on level 1. 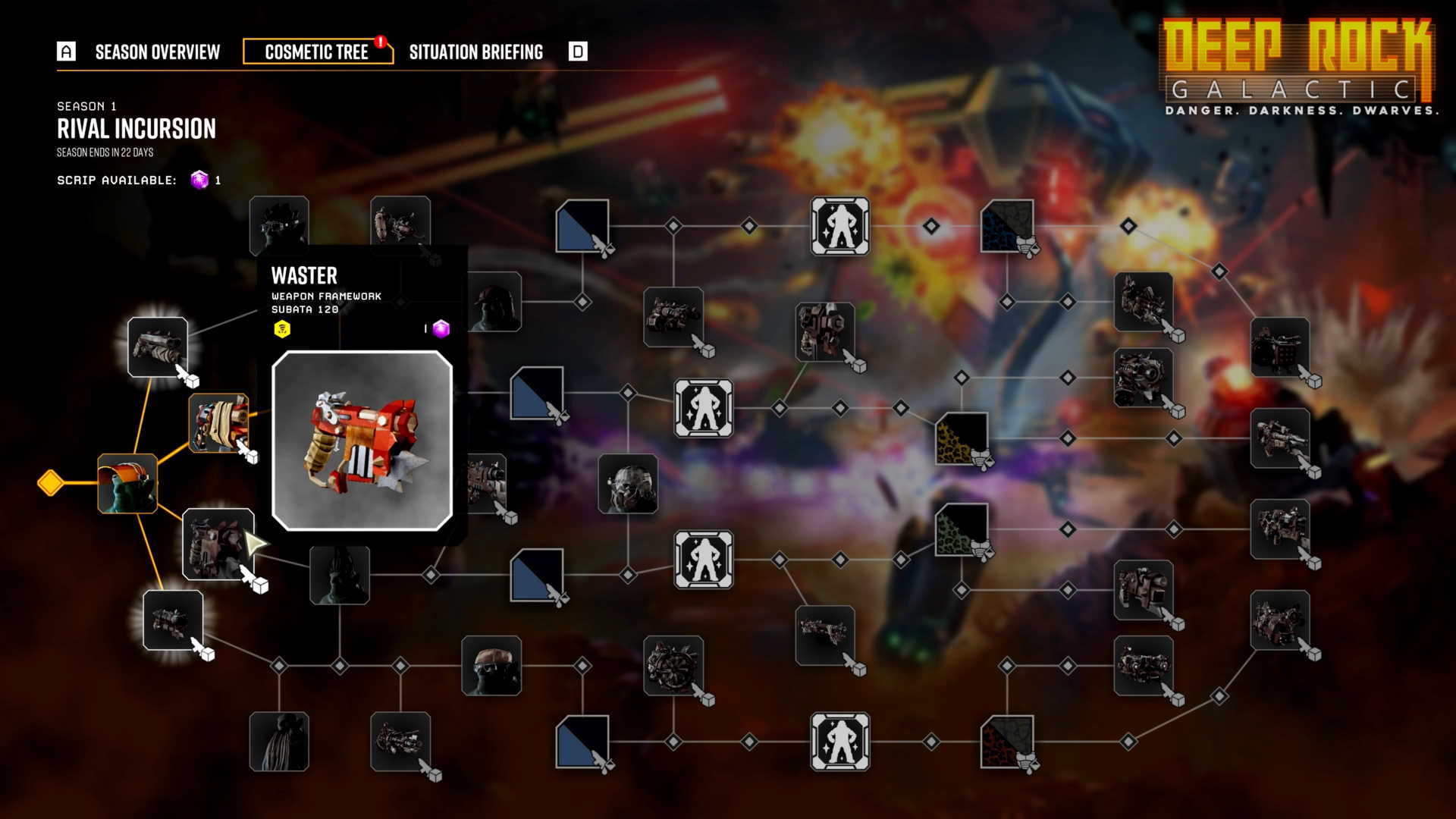 I usually play on the Windows PC build, and my preview access was via Steam, which left me at level 1 for everything. Due to this, I had no access to harder missions, and couldn’t matchmake with my regular crew, so that might be why I was getting performance points at such a slow speed. There are also challenges that will grant you additional bonuses, so there’s plenty of way to get scrips by just playing the game.

But it’s not just all about cosmetics with this first season. Season One is called “Rival Incursion” and adds four new contracts for four new weapons: one for each player. Engineers can get hold of the LOK-1 Smart Rifle, which has tracking rounds. Drillers can get something called a Sludge Pump, which I got to see in action and looks amazing, allowing you to slow enemies down and let everyone else pile on the damage. Scouts can unlock the DRAK-25 Plasma Carbine, while Gunners can get the Hurricane Guided Missile System. 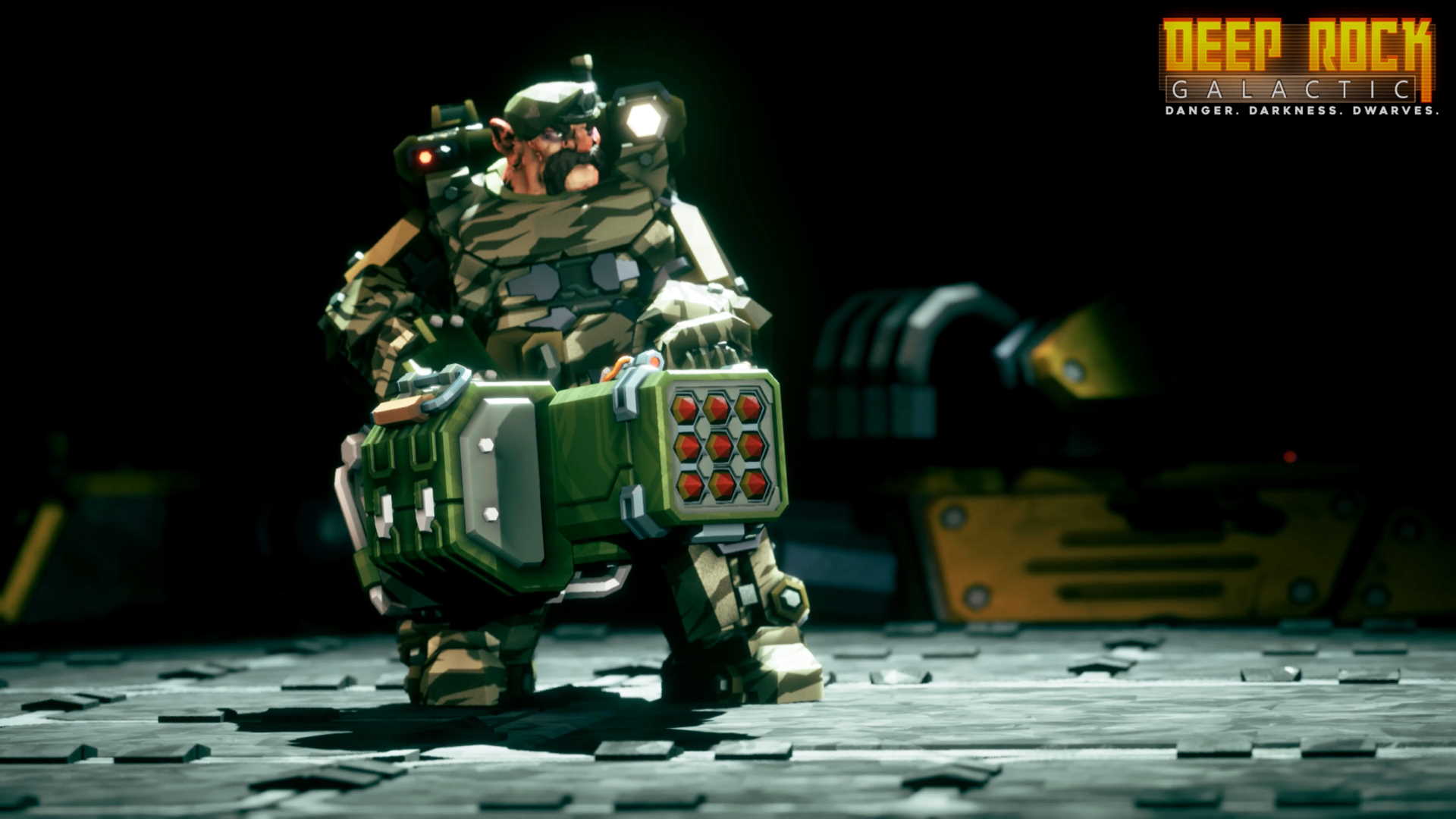 All these weapons are for players at level 20 and beyond, and while that’s not something you’ll do in an evening, there’s plenty of weapons to unlock for beginners anyway. The new weapons all have gear mods of their own, with 26 new overclocks, and 24 framework variations, and if you own MegaCorp DLC you’ll have the 4 variations added automatically. Elsewhere, you should search the base thoroughly as Ghost Ship Games has added a new football minigame for people to play on the ship. I’m not going to spoil how you do that here, but I will say “central area”.

Really, all of this is the icing on the cake of a phenomenal game. There’s an increase to the number of loadout slots, which will give long-time fans a big smile, as will the new mission called “Industrial Sabotage” which introduces a new set of enemy types and a new boss as well. It’s not just a new mission; it’s a new mission type. You have to find a data-vault and escape with the data-rack, which requires you to find power stations and remove a force field which, yes, means a boss fight. 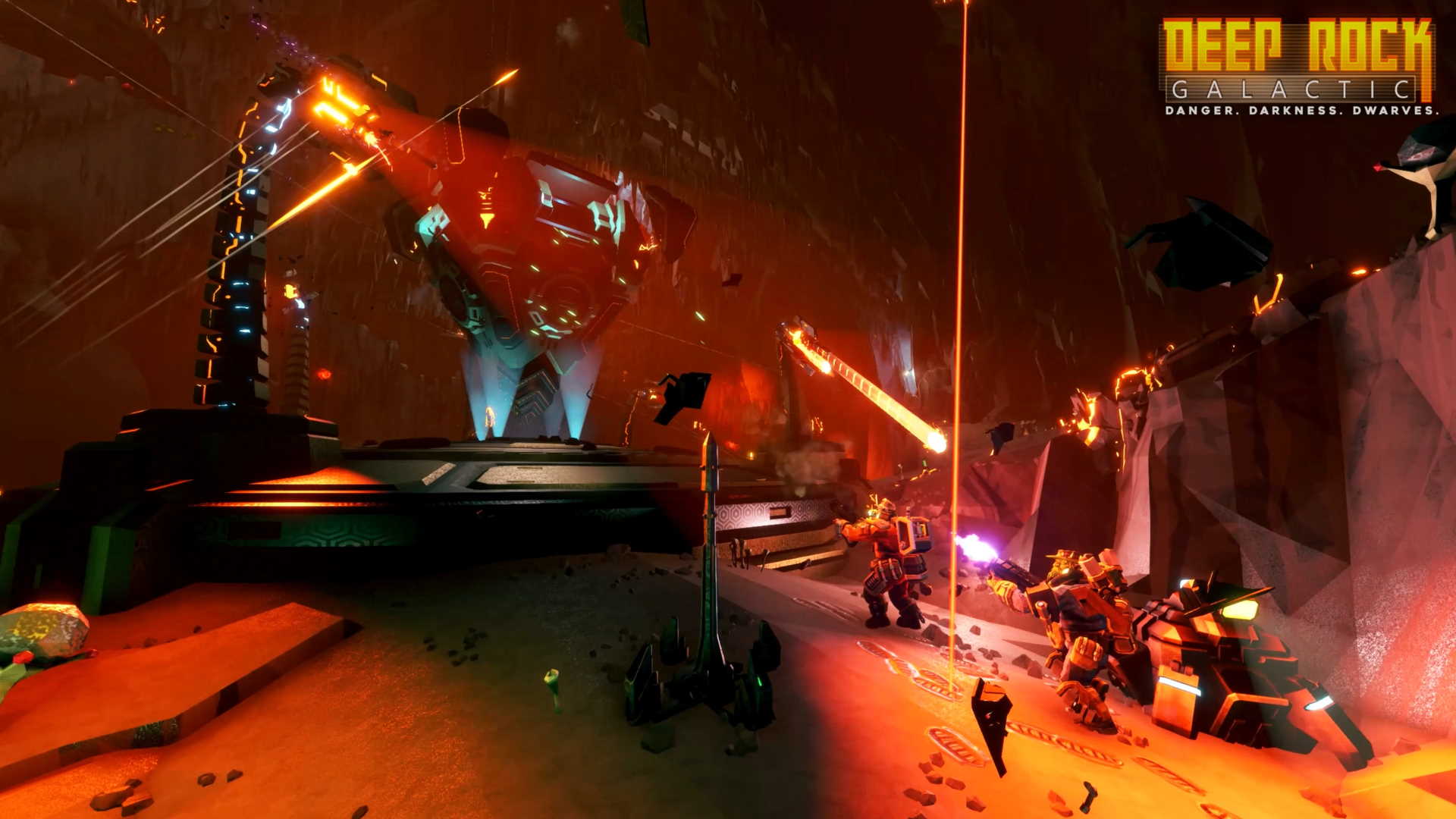 I watched four of the dev-team fight the boss and… it’s hard. Seriously hard. I’m not saying they used cheat codes because they ran out of ammo, but I’m not not saying that, either. It was all in good fun, in fairness, and was due to skipping part of the mission to show us media types more of the boss fight, which was appreciated.

Another reason to play this game or jump back in

I asked Ghost Ship Games if each new season would be as drastic an update as this one. Deep Rock Galactic seasons really is a huge change for the game, and the battle pass alone would have been a big deal, let alone a new mission, new weapons, and the new secrets. The developer was coy, but suggested that this would likely be one of the bigger ones, because it’s the first one. Frankly, I’d be curious as to how many beard and hair designs they’ve got lined up for each new season alone.

But what I came away from this all with, really, is a question: “why am I not playing this game more?”. Deep Rock Galactic is phenomenal. It’s engaging, with a ridiculous amount of content to get stuck into. The mining is amazing, but the teamwork is what makes it. Playing the preview content solo I kept thinking “Man, I wish I had a driller with me, we’d be through this shit in no time”, and that’s what it does so well. Each class compliments the other. It’s still in Xbox Game Pass, and if you like a tight, responsive shooter that throws in looting, mining, and friendship, this new season is the perfect time to rectify your mistake of not playing it before. Rock and Stone, brother.

Deep Rock Galactic is available now for PC and the Xbox family of Consoles via Game Pass.