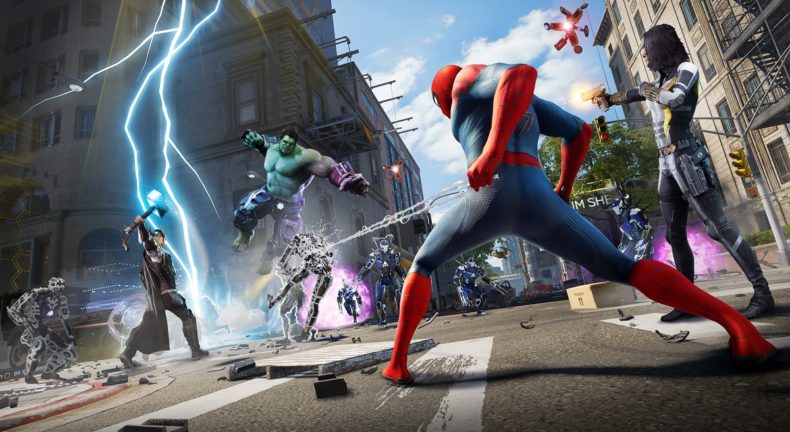 It’s pretty obvious how players felt about Marvel’s Avengers endgame content. For a while it didn’t deliver, and many fell off it quickly. I’m not here to dwell on that, though. Far from it. in fact, Crystal Dynamics has gone to great lengths to make plenty of free content for those still persevering in the quest to take down AIM. Hawkeye, Kate Bishop, and Black Panther have since joined Earth’s Mightiest Heroes in some tasty expansions. New events and multiple improvements have been added as well, making it well worth returning to. I’ve continued to play ever since it released, and I’m still enjoying it. With the Marvel’s Avengers Patch 2.2 dropping on November 30, I was fortunate enough to get a good look at what’s to come, including the PlayStation exclusive ‘With Great Power’ Hero Event, and the first official raid, ‘Discordant Sound.’ 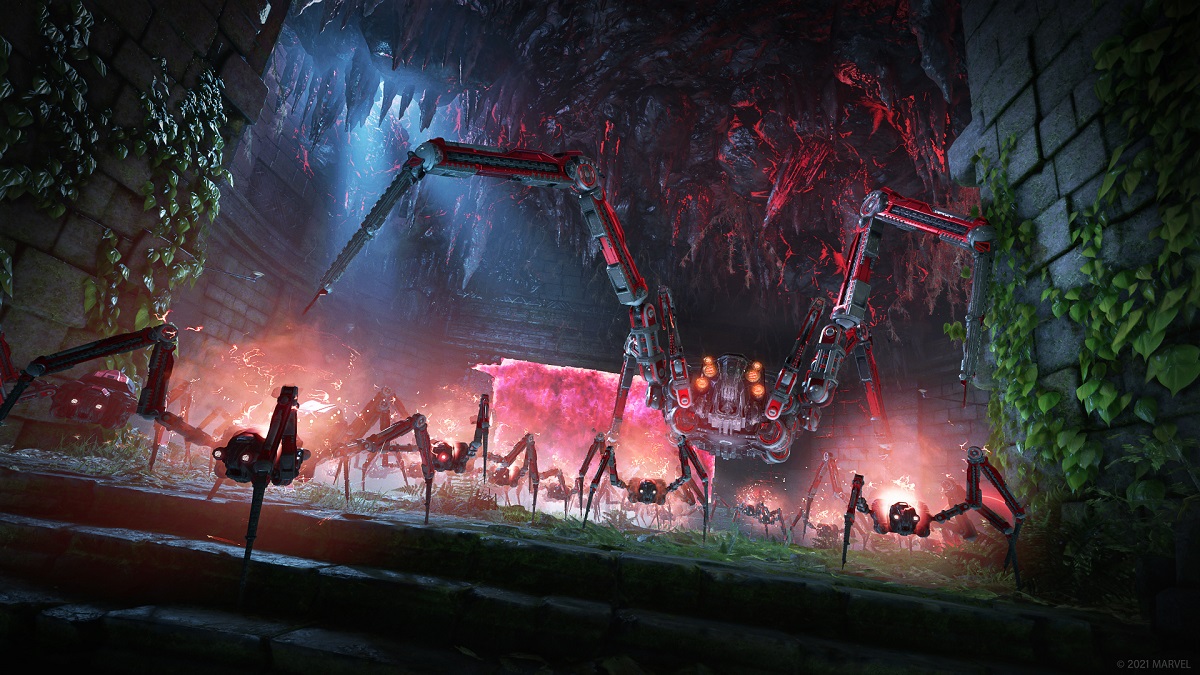 Let’s get to brass tacks. Spider-Man has been on the horizon for a long time. Announced well over a year ago, PlayStation players were promised exclusivity of the webslinger. Now, he’s officially coming, and boy, does he look good. From the footage I’ve seen, he could easily become one of the favourites. Although the With Great Power Hero Event isn’t a standalone story, their is a tale to be told. Peter Parker uncovers a plan that sees AIM acquiring technology from Allan Chemicals to improve their Synthoid army. What’s cool for Spidey fans is the fact Liz Allan and Mark Raxton are in it. Allan has played a role in the comics for decades. She used to go to school with Peter, married Harry Osborn, and even appeared in Daredevil for a while.

As for Mark Raxton, he once worked for Oscorp, eventually turning into the villain, Molten Man. He’s also Allan’s step-brother. How all this plays a part in With Great Power is yet to be seen, but once again, Crystal Dynamics has woven characters from the comics into the overall arc of Marvel’s Avengers. However it turns out, I’m excited to see how Spider-Man fits into it all. Anyway, enough geeking out. There’s going to be comparisons to Insomniac Games’ take on Spider-Man. Watching the footage, there are some similarities, but Parker has plenty of variety for this version to stand out. In CQC, Spidey uses his swift movement to land quick blows with his fists and feet. From distance, his webs will shoot projectiles. Both can be upgraded to use web tethers and fancy combos. 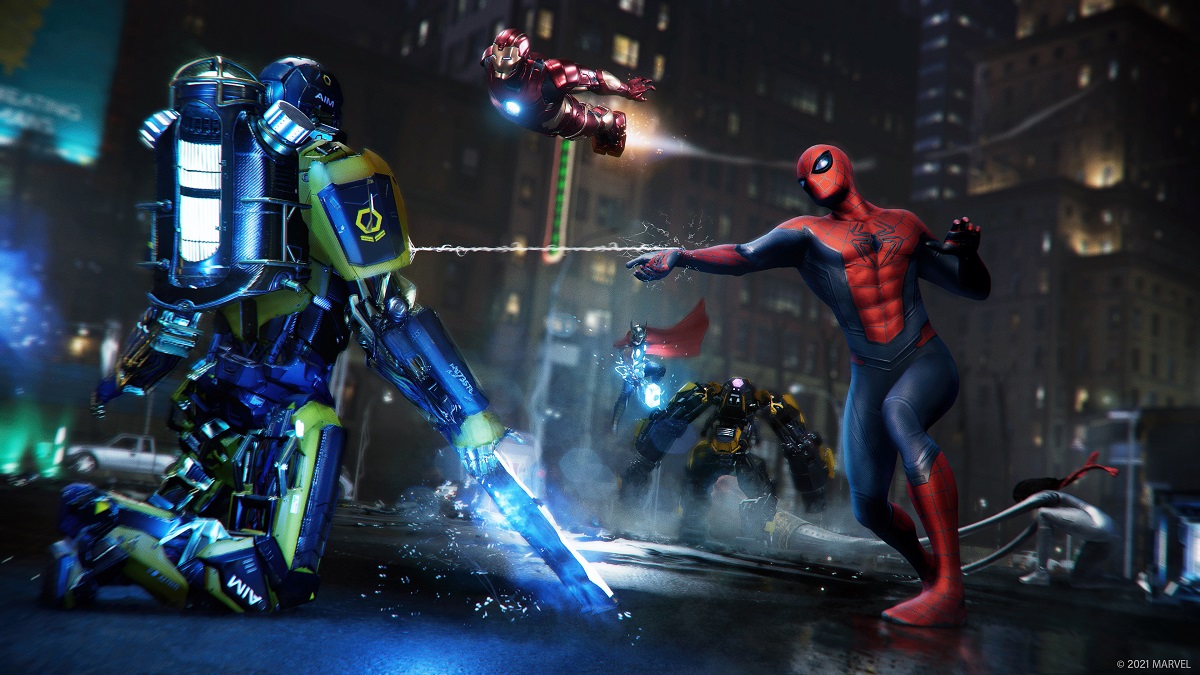 As for Spider-Man’s Heroics, they offer plenty of variety. His Support Heroic is the Spider-Drone, launching drones at enemies that do damage to more enemies as you upgrade them. The Web Bomb is his Assault Heroic, and can be thrown at a bunch of bad guys to explode and cover a large target area. His Ultimate is the Wrecking Ball. He forms a huge ball of webs and throws it at enemies to trap them, leaving them defenceless and unable to attack for a short time. Each Heroic can be improved like other heroes, and some of the upgrades are impressive. Spider-Man can swing from building to building, run up walls, and climb buildings. Movement is so fluid, and the way combat flows has potential to rival the recent games from Insomniac.

Discordant Sound is the first raid to come to Marvel’s Avengers. Taking place after the events of War for Wakanda, teams of heroes must battle a huge version of Klaw. As Black Panther says in the video I watched,”Klaw has become the living embodiment of his machines.” He is throwing everything at the player, including huge spider drones and corrupted Wakandan tech. Not only is it suited for players of a high level, it’ll require teams to solve new puzzles as well. It’ll take place in Wakanda, and features new enemies, as well as tough bosses and multiple challenges. Although it looks pretty tough, there’re some great looking environments in the Klaw Raid. The game has always looked impressive, but it seems like Crystal Dynamics are pushing the boundaries, especially on PS5. 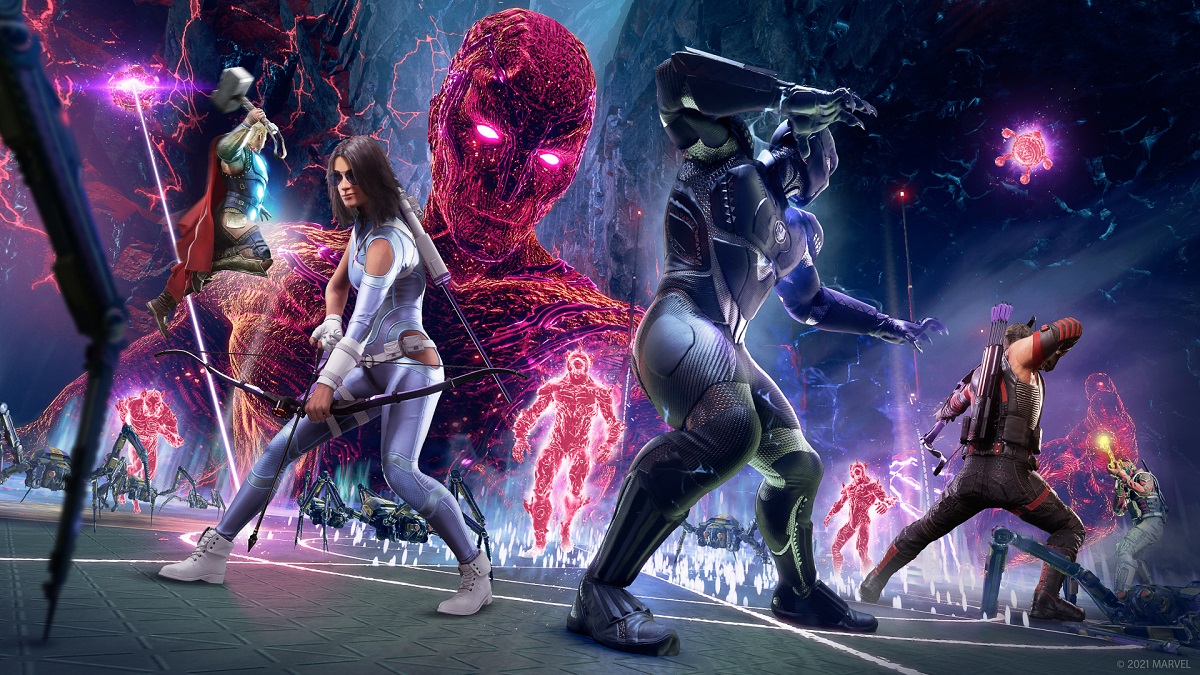 As you progress through the raid, high level gear will become available. Unfortunately, you’re going to have to work for it. Klaw is back and he’s bigger than ever, literally. Discordant Sound looks like the perfect challenge for those that have stuck with Marvel’s Avengers since the start. The upcoming Power Level increase from 150 to 175 will make these raids more of a challenge, with an Elite Level version of the raid for players at 160 to really push you. Honestly, I cannot wait to get stuck in. There’s now a lot of content for players to jump back in and continue the fight against the forces of evil. People need to stop giving the game a hard time.

The Marvel’s Avengers 2.2 update is going to provide players with plenty of content. Not only is Spider-Man available as a new hero for PlayStation players, the Klaw Raid is going to be one hell of a ride. From what I’ve seen, Spider-Man is going to be great to play as, and will provide teams with a superb support hero. He’s so versatile, with many nuanced skills set to improve the overall gameplay when fighting waves of AIM’s forces. The patch will also include the new Shipments system that gives players a way to finally earn cosmetics instead of spending real money to buy them. If I were you, I’d redownload and get up to speed, because now is the perfect time to give it another shot.

Video games are cool. Don't let anybody tell you any different.
MORE LIKE THIS
crystal dynamicsMarvel's AvengersSpider-Man