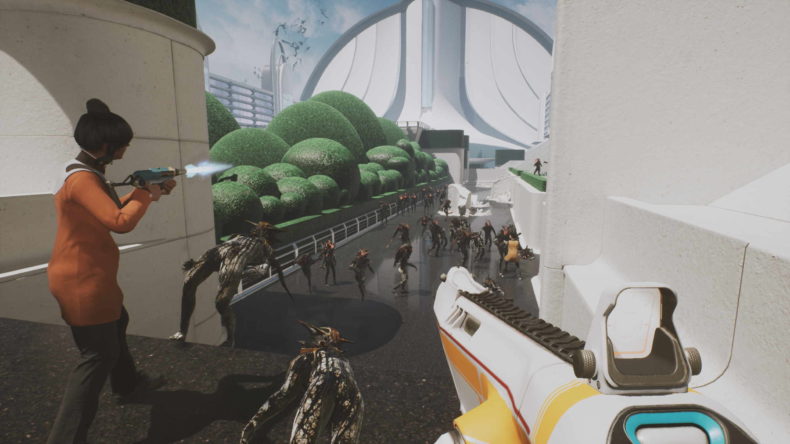 The Left 4 Dead games have played a huge part in my life. The series was one of the first my partner truly adored, and as a physically disabled man often all his body can take is a day playing games in bed. Before we spent these tough days exploring service games like Sea of Thieves and ARK, we would play hours and hours of the zombie co-op game where no two runs are the same. Because of this we were more than excited for Back 4 Blood, but unfortunately that game just didn’t scratch the same itch. But The Anacrusis is just around the corner, and after playing around eight hours of it I can confirm that this is the Left 4 Dead successor we’ve been waiting for.

Set on a stranded starship overrun by alien nasties, you and three friends are tasked with surviving waves of these “definitely not zombies” and making it to the next airlock alive. This isn’t just your standard bleak metal aesthetic though. There are colourful corridors and vibrant shopping malls packing the 1970s sci-fi pleasure cruiser with interesting environments to explore. It’s an incredibly stylish backdrop to a familiar gameplay loop.

The Anacrusis: the director is in charge

The Anacrusis isn’t afraid to wear its influences on its sleeve. If you ever played Left 4 Dead you’ll feel right at home. Unique special aliens, health kits and temporary health “booster shots”, doors that can only be unlocked by calling the alien menace to your location. All your favourite mechanics are here and work just as well as they did in 2008. Perhaps the most important of these though is the “AI Director”, which controls what aliens spawn and adjusts the difficulty on the fly. This works remarkably well, with every run feeling completely different to the last and bringing the right amount of challenge every time. 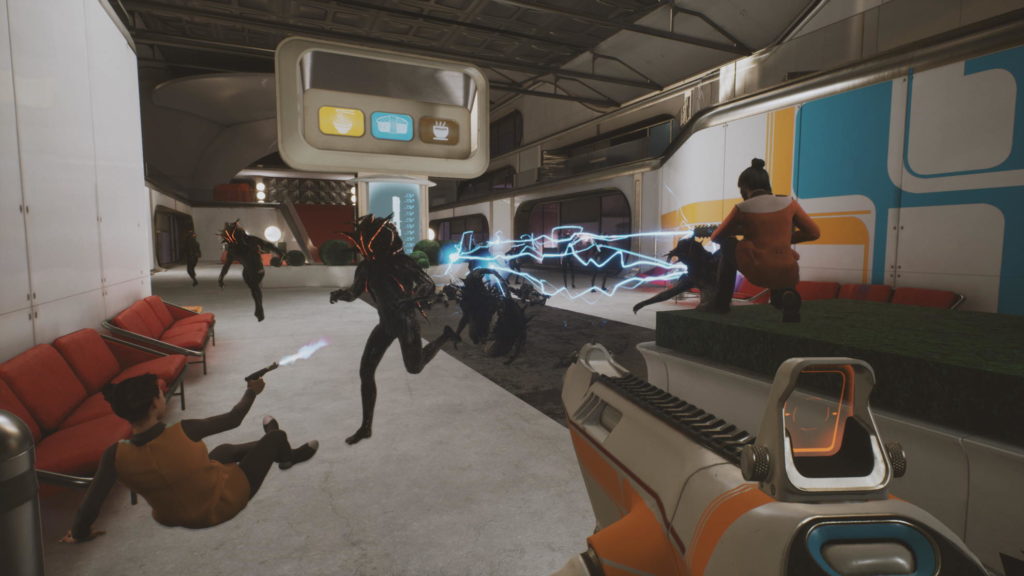 To face down the selection of extraterrestrials blocking your path, you have access to a variety of space age weapons to switch between. The three standard guns fit into the Assault Rifle, SMG, Shotgun mould. The the satisfying thud of the Plasma Rifle ensuring I chose nothing else. Your selected character also comes equipped with a puny laser pistol with unlimited ammo as a last resort. Perhaps the most exciting weapons though are the special ones that come with limited ammo but deal massive damage. The scorching Laser burns through even the toughest foes. The Arc gun chains lightning between enemies to stop hordes in their tracks. Even the grenades in The Anacrusis are interesting. There’s time slowing stasis grenades for hectic moments, vortex grenades to suck enemies into the air, and Goo grenades creating a safe area that foes will struggle to penetrate. I never tired of using whatever tools I discovered to attempt to overcome the odds.

You’ll need all the guns and grenades you can grab to survive the alien menace. The standard aliens simply run in a straight line at you and require a few blasts to dispatch. But the special aliens are much trickier. There’s the Spawner who sends out rolling turrets that’ll shred through the team’s health if you don’t deal with them quickly. The Gooper encases allies in green mucus that you’ll need to blast off. Then there’s the Brute, who jumps and smashes into everybody and takes a hell of a lot of bullets to put down. I wasn’t sure how easy it would be to differentiate the specials from Left 4 Dead, but with creative ideas like an alien who blinds you all with bright lights or alien eggs that roll at you when disturbed, The Anacrusis has gone above and beyond in that department. 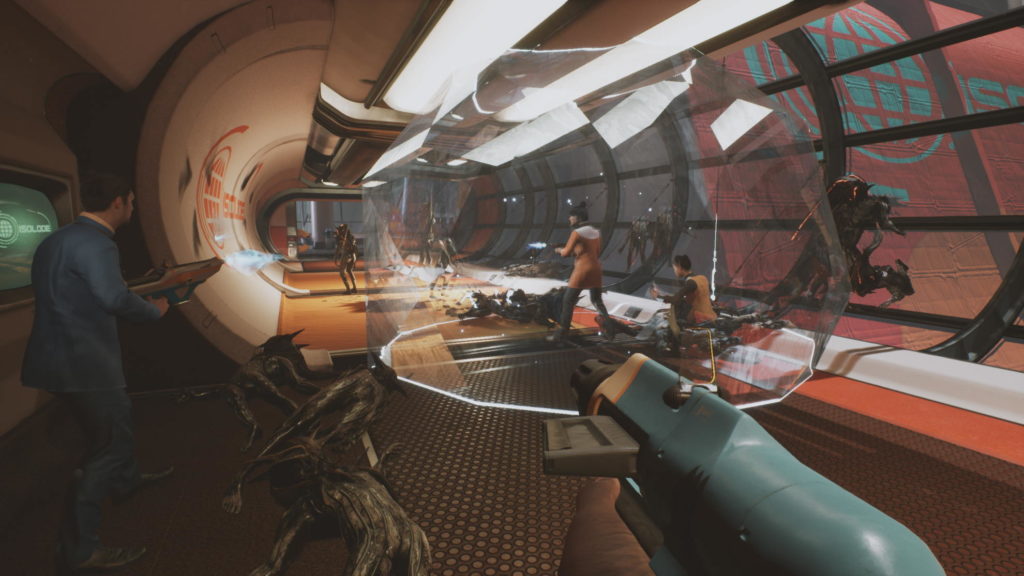 There’s one major difference between Left 4 Dead and The Anacrusis mechanically, and that’s the addition of perks. By finding hidden consoles in each level, you’ll be offered three perks to choose from that will upgrade your alien surviving capabilities. Some are pretty basic, like faster healing or higher max health. Others, though, are more active and game-changing. One run ended with me having a gun that blasted through enemies, the ability to heal allies above their max health, and goo grenades that healed them over time. Against an incredibly tough final survival stage I felt like an unstoppable healing god, and helped my team survive to save the day.

What really sets The Anacrusis apart from other co-op shooters is the joyful simplicity of it all. There aren’t a bunch of stats to worry about or guns that all basically work the same, here. You just grab a weapon that works for you and get on with it. The action is frantic and situations involving multiple types of alien require split second decisions, but you aren’t having to deal with character builds or lengthy setup before jumping into the action. 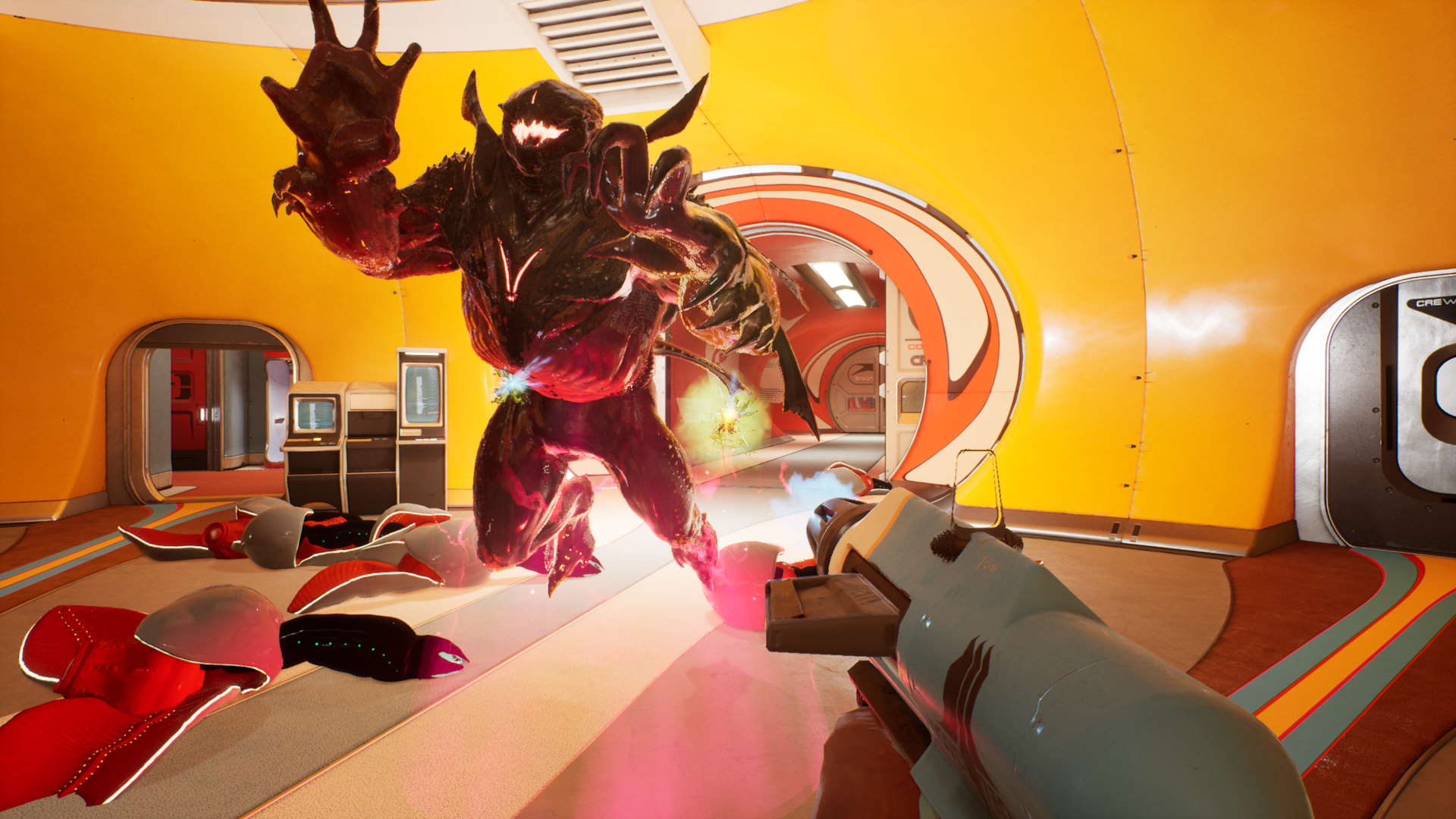 In single player, the AI companions are rather impressive. There have been a few instances of them getting stuck or falling down a particularly easy to jump crevice. But for the most part they feel incredibly helpful and entirely competent. Fighting back a bunch of aliens is undoubtedly better with friends, but if you are a player or two short you won’t be frustrated.

The only aspect of the game I haven’t really been wowed by are the characters. They just haven’t really had enough back and forth for me to truly get to know them so far. I’m hoping that as I play more their personalities will shine through, because one of my favourite aspects of Left 4 Dead was the safe room banter.

The Anacrusis looks to be everything I want from a spiritual successor to Left 4 Dead. The pick up and play nature is compelling from the drop, and the 70s sci-fi setting is so refreshing. The AI Driver really makes every session totally different, facing different combinations of aliens in different settings doesn’t get stale. I know the next few months of my life will be spent replaying the game over and over again with my partner, and I can’t wait.

The Anacrusis is available via PC early access and Xbox game pass via preview program on January 13.

Nobody Saves the World Complete Guide