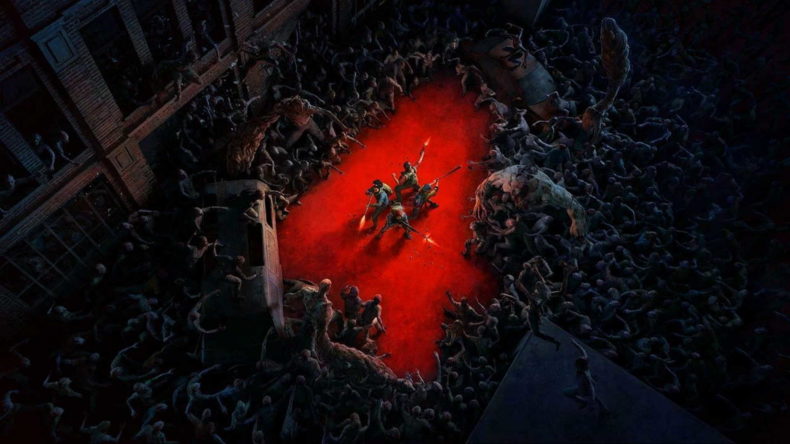 It would be nice to get through this review without repeatedly referencing Left 4 Dead and its sequel, but there’s so much of the same DNA in Turtle Rock’s might-as-well-be-a-threequel, Back 4 Blood, that it’s going to be almost impossible.

As I’ve already said in two different previews, Back 4 Blood is Left 4 Dead 3 in all but name. Yes, it’s set in a different place and the Infected have been replaced with the Ridden, but that’s it aside a few additional mechanics. In this particular apocalypse the hordes of mutated humans have been caused by a parasitic worm that infests and takes over the host. 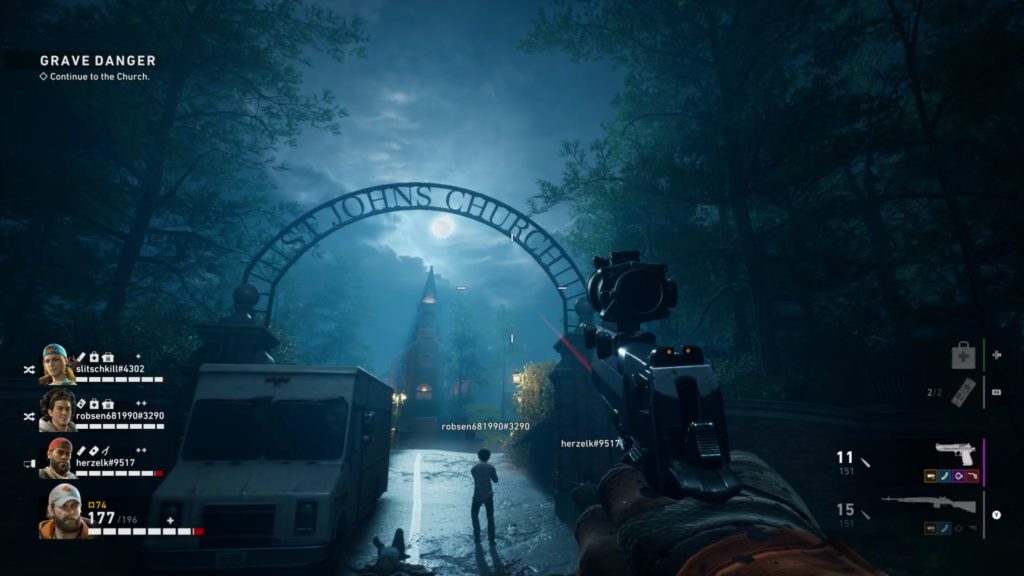 They become zombies at first, but then take on a variety of mutations that turn them into much moire dangerous creatures. There are Tall Boys, Crushers and Brutes, each of which does something very brutal with its one oversized hand. There are Hockers who cling to walls like spiders and spit gobs of sticky mucus at you. There’s one that vomits on you, one that pounces on you and drags you away, another that screams bloody murder if you startle it, summoning a horde.

To be fair, if you played a lot of Left 4 Dead or its more recent homage, World War Z, then none of these mutations will feel new. In fact, they’re now almost generic, which sadly robs some of their impact. It’s annoying when they pin you or grab you and you need to either await rescue or use a stun gun, but they’re not all that scary any more.

Back 4 Blood attempts to compensate at times by simply hurling them at you in almost comical numbers, but there’s little you can’t overcome by back-peddling while spraying bullets. Which is not to say they don’t have an effect. Seeing a Tall Boy materialise through the fog, or hearing the echoing belch of a Retch will give you pause. It’s just not scary. It’s reached the point where every mutation you spy on the near horizon just means more fun. 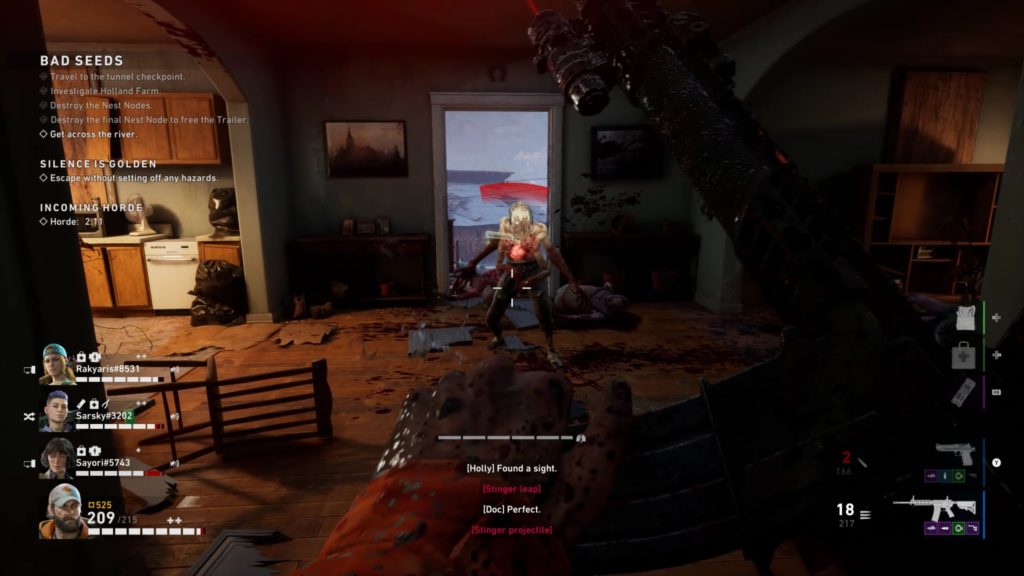 Each of the eight Cleaners you can choose to play as has different starting gear, and will bestow unique buffs and abilities on the party. Bat-swinging redhead Holly, for example, does increased melee damage, while former game hunter Jim increases everyone’s aim-down-sights speed. These buffs aren’t enough to make or break a team, but add a little individuality to each Cleaner.

Bring out the dead

Unlike that aforementioned other game, though, you aren’t just a bunch of desperate survivors trying to evacuate. As Cleaners, your job is to sweep urban areas and eradicate Ridden nests, search for and rescue survivors, and sometimes cause distractions long enough for your comrades to evacuate people to safety. Money found throughout each level allows you to buy upgrades for your weapons and items like pipe bombs, toolkits, first aid kits and stun guns.

I spent most of the game waiting for a stage to really stand out. Something like the rock concert level in Left 4 Dead 2, or Hard Rain, where infected are chasing you through the cornfields. Back 4 Blood doesn’t have many big boom moments, but there’s a few. Trashing a bar to the beat of whatever is on the jukebox is a highlight. The first time I got Ace of Spades by Motorhead, the second time I got Tick Tick Boom by the Hives. 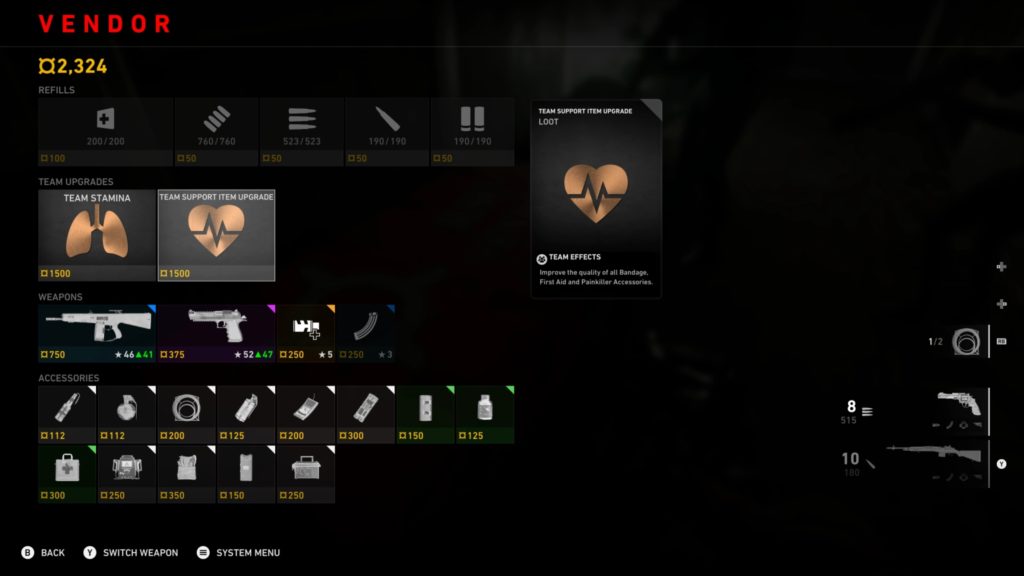 What Back 4 Blood does have in every single level is atmosphere. Whether you’re picking your way through a mist-shrouded swamp, blowing out the shafts of an abandoned mine, or wading through a flooded warehouse, the lighting, sound direction and pacing are all on-point. Some missions can go horribly wrong, of course.

More than once it only took one careless player to run too far ahead and trigger a horde between them and the group to see us all wiped out. On high difficulties the enemies burn through your health in seconds and one mistake is all it takes. That said, it feels extremely badass to lone wolf it to a trapped, pinned, or surrounded teammate and save their skin.

But therein also lies Back 4 Blood’s biggest failing: played alone, this game is just not the same experience. The AI bots are useless, often getting themselves killed trying to rez you without first clearing the horde. They stand still too much, glitch out, get stuck on scenery, always use the starter guns and mods. There’s also no true progression or achievement unlocks when you play the campaign in solo. It’s handy to learn the layout of missions, but that’s it. 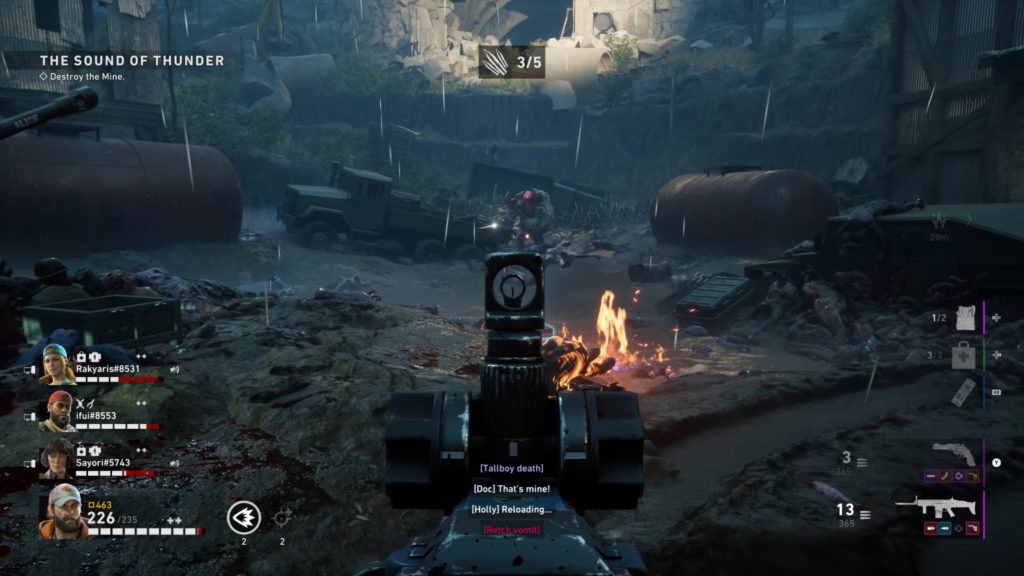 Played in a group though, this is easily one of the year’s best multiplayer experiences. Not only can you work together and communicate, but each of you can activate Cards during each stage of an act. These Supply Cards add buffs like increased health, team benefits like faster stamina regen, and scores of other abilities and improvements. Some of the best cards have negative effects too, such as disabling your grenade slot in exchange for a massive passive boost to damage.

You can use the preset decks or build your own from tons of cards unlocked with Supply Points. You’ll earn these for playing through the campaign in multiplayer, and they also allow you to unlock skins for your Cleaners and weapons, or banners and spray paint patterns. Over a hundred challenges also reward you with Supply Points and Cosmetics, ensuring you always have something to chase.

Each gun can be modded in a variety of ways. Muzzle, magazine, sight, and stock can be changed. Both the weapons and mods are colour-coded in green, blue, purple, orange, giving you a quick indication of quality. Sometimes you’ll hang on to a gun you don’t love because the mods you have are too good to throw away. They do wonderful things like speed up reloads, or greatly improve accuracy and handling. 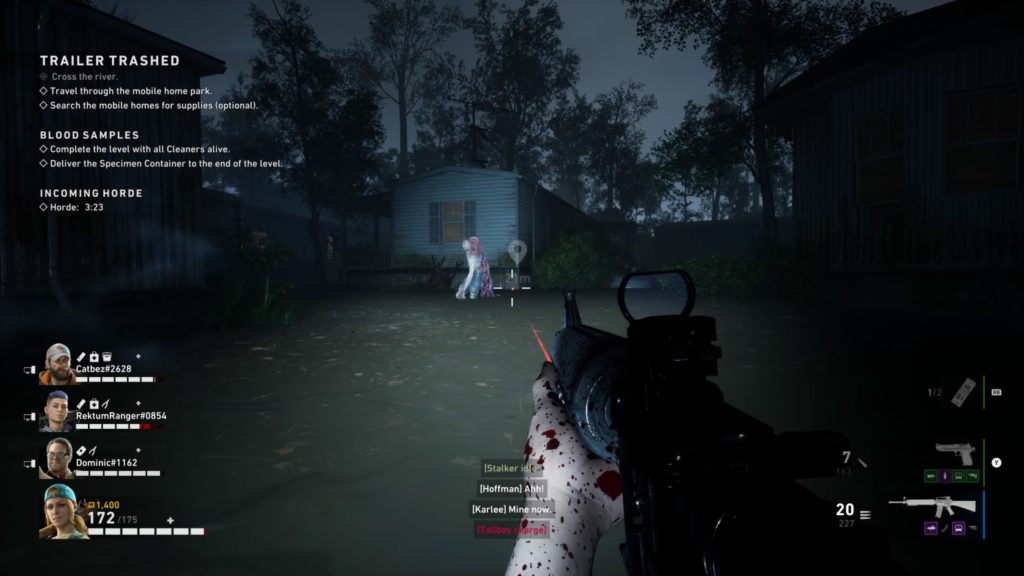 If you want a change of pace, you can also play Swarm mode, which gives other players control of the Ridden horde. This mode is a nice distraction and offers its own rewards, but I haven’t clicked with it like I have the main campaign. It feels buggier, and in some ways having the horde controlled by a player doesn’t feel… right. They should be mindless. The AI does a good enough job of hurling enemies at you.

With the AI Director working to switch weapon and item drops, enemy placements, fortifications and mutations, and the incredible atmosphere always pulling its weight, Back 4 Blood is a triumphant return for Turtle Rock. Yes, some parts of the game are glitchy, and the almost tacked-on solo mode feels like an actual insult to players who maybe just want to experience this without other people. But ultimately Back 4 Blood is the most fun I’ve had with a shooter this year, and an absolute blast to play with friends.

Thanks to the AI Director, incredible atmosphere and great pacing, Back 4 Blood is a triumphant return for Turtle Rock.