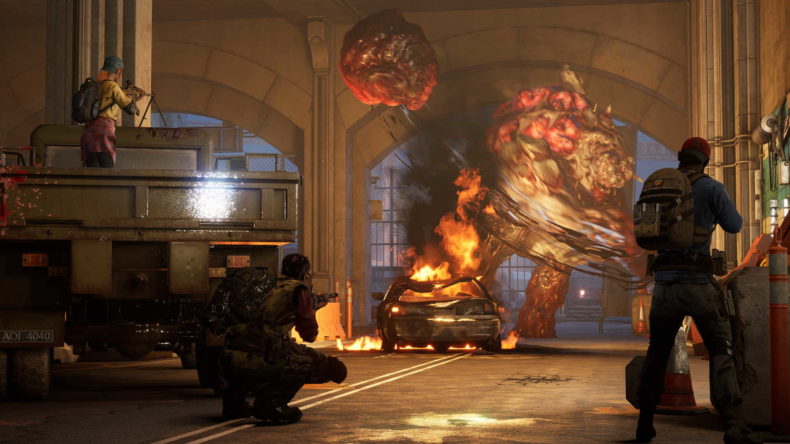 It might sound a little cliched, but it doesn’t feel like five minutes since the last time I previewed Back 4 Blood. In actual fact, it has been eight whole months. It was December 2020 when I jumped into the closed alpha of Turtle Rock’s new co-op zombie blaster, and I’ve been hungry to play more ever since.

What’s really odd is how little has changed. It may be my memory playing tricks, but it wasn’t even particularly rocky before. It was pretty technically proficient for an Alpha. And that hasn’t changed. In fact, aside that this Beta lets us walk around the new hub area and interact with NPCs, it feels very much the same. Frankly, I’m okay with that. 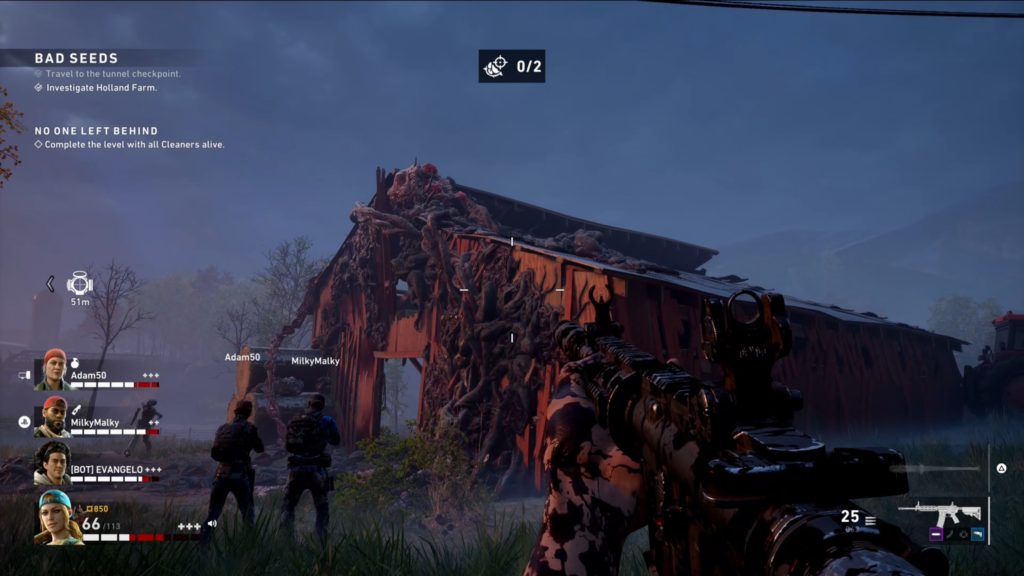 Back 4 Blood: Kill all sons of bitches

I’ve wanted Left 4 Dead 3 since I finished Left 4 Dead 2 and this is that in all but name. There are changes to that formula in particular, but none that make much of a difference. At least not in the Beta, anyway. For a start there’s an element of card collection now, although it’s difficult to see how deep that rabbit hole will go. You’ll unlock cards as you play, and from a custom deck you’ll pick a new card for each chapter of an Act.

CHECK THIS OUT: Jupiter Hell is a thrilling turn-based roguelike

These cards offer various buffs and debuffs and from what we can see, there’ll be a lot of them. When I was playing with Adam and Chris, they both selected a card that reduced the movement penalty to strafing and back-peddling. But it also prevented them from running. As you can imagine, this caused some issues when the horde got too much for us, but it’s a good example of what you’re dealing with. Some are more straightforward, like adding health and stamina, extra melee damage or health regeneration. You’ll need to experiment when the full game is released.

Similarly to Left 4 Dead, Back 4 Blood is broken into scenarios. These are little stand-alone adventures that see your crew of wisecracking survivors battling their way through hordes of undead. Here, they’re called “Ridden” thanks to the parasitic worms that have reanimated and mutated their corpses, but it’s all the same really. There are standard zombies that come at you in hordes or else stand around groaning until they spot you. But there are also a handful of special Ridden similar to what we’ve seen in more or less every game of this ilk since the first Left 4 Dead. 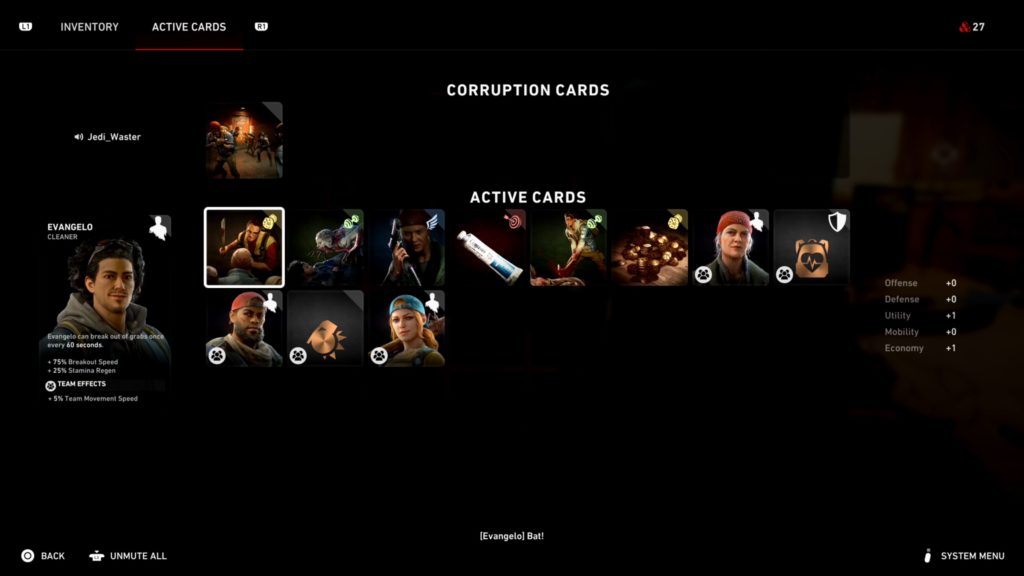 Tall Boys, Snitches, Hockers… These names that will come to mean something as you play. These special enemies all pose their own unique threat and help to spice up the minute-to-minute gameplay. Their placement is random, as is the placement of weapons and gear. Perhaps aping L4D’s subtle audio cues would be a step too far here, but it needs something. There’s not enough anticipation when they turn up to put you on edge. In Back 4 Blood they’re just suddenly there, and there’s just not quite enough tension.

That being said, that’s more or less my only complaint. Although, we’ve yet to see everything in the Hub area. This survivalist camp is where your band of “Cleaners” can tool up, squad up, mod their gear and select weapons before heading out. There are two currencies: Copper and Supply Points. The former is used in-mission to upgrade weapons and buy gear items like grenades and bandages. The latter is used in the hub to activate random drops in the next run and unlock new cards. It’s a cool system that leans more heavily into the rogue-lite potential of the genre.

Guns have a great heft and weight to them. Mashing through Ridden is an addictive feeling, and there’s something that’s still intoxicating about saving a team mate’s life. You can fall off ledges or get trapped, necessitating a rescue. Sometimes you’ll just need someone to come running to your aid when you’re surrounded. These emergent gameplay moments are what make this genre stand out and they’re present here. Placing gas cannisters, razor wire, or knowing you’re down to your last two shots and a stun gun… These little touches deepen the immersion and make you feel like you’re in the fight for your life. 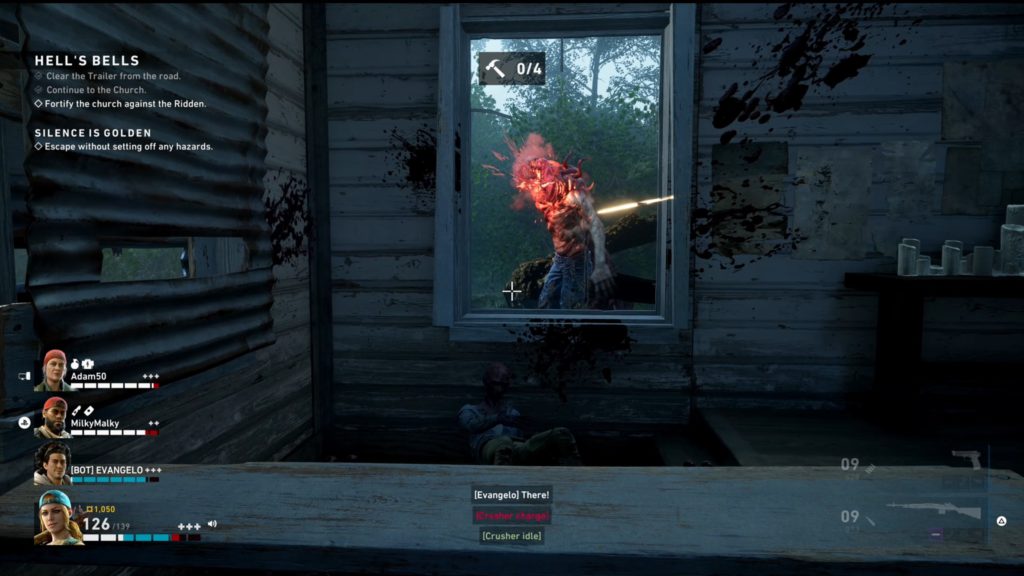 One thing that’s certain is that Back 4 Blood is 100% better with other people. Playing alone you’re stuck with bots who are, frankly, idiots. While friendly fire is a thing and you’ll occasionally get squadmates that will run off and get killed or otherwise abandon you, it’s better with living players. Teamwork is crucial, especially when facing a thirty-foot tall Ogre. Modifiers that lay a blanket of fog over the stage necessitate team call outs and tight formations, and you need people to facilitate this.

CHECK THIS OUT: We visited a brand new arcade in 2021

Your choice of survivor won’t impact gameplay much beyond the soundbites they drop as you find gear or Ridden. However, there’s a great spread of weapons. You can choose between ranged and melee, pistols, rifles, shotguns. There’s even a scoped shotgun in there, thanks to the randomised mods. It ensures an element of replayability that should have strong legs to carry Back 4 Blood forward. Thankfully, we only have to wait until October 12th before we get our hands on the finished release – and I can’t wait to go back 4 more.

Senior Content Editor Mick has been playing games for over 30 years and writing about them for around 12. After drifting from site to site for a while, settling briefly at the now-defunct Made2Game and freelancing for the gone-but-not-forgotten NintendoGamer Magazine, he came at last to rest at Godisageek. Mick has been a reviewer, staff writer and content editor here for some time, while also moonlighting a little for Red Bull Games. He has 4 kids, has written 2 novels, and sometimes even manages to pay a bill or two. You'll usually find him defending the galaxy in Destiny 2, battling evil in Diablo 3, or lurking in the background on Twitter. Find him there @Jedi_Beats_Tank, or on XBL (JediWaster247), PSN (Jedi_Waster) or Nintendo (JediWaster).
MORE LIKE THIS
Back 4 BloodLeft 4 Dead 3Turtle Rock Studios