previous
What are the strategic differences in trading with cryptocurrency compared to stocks?
random
next
GOTY 2020 Podcast: Day Two
0 comments 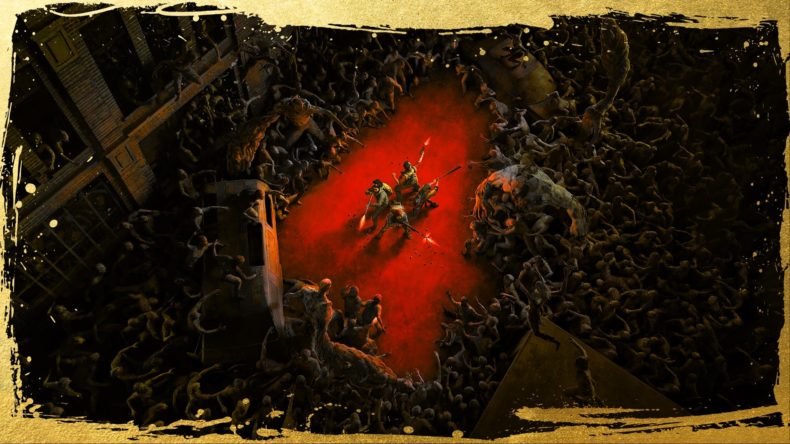 It may come as no surprise to learn that Back 4 Blood, the new cooperative squad shooter from Turtle Rock Studios is, in fact, Left 4 Dead 3 in all but name. Actually that’s not entirely accurate – there are some minor story changes too, as it’s now a species of parasitic worm causing people to mutate, rather than a rare viral infection. And they’re not called “infected” now (although they are referred to by that title in passing), but rather the “Ridden”. And that’s about it. In every other way, it may as well be the third entry in Valve’s legendary franchise.

Now I know we said this all before a while ago when World War Z launched, and we’ve seen a few other titles ape the concept strongly such as Warhammer: Vermintide, Earthfall: Invasion and, most recently, Second Extinction, but Back 4 Blood is different. There’s an element of … I don’t know what, actually. Quality isn’t the right word, and neither is it entirely fair to the other titles I mentioned. It’s more like putting on a comfortable jumper, or coming home after a long period away. Turtle Rock being at the helm makes a difference you can feel, if not fully identify. 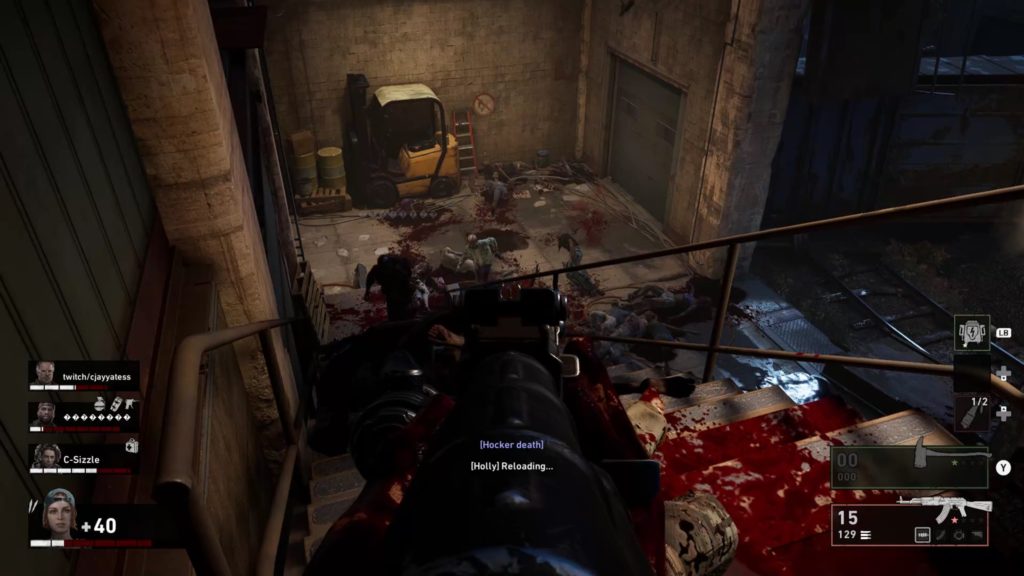 Their last big release was Evolve, if you remember it, a very good 4 vs 1 monster hunting game that failed to find a long-term audience despite obvious quality and a decent stint as an esport. These are the guys and gals (or a large number of them) responsible for developing Left 4 Dead and its sequel for Valve, and it shows.

Back 4 Blood feels great to play. The guns have weight, and there’s a sense of impact to slicing through mutant heads that has been a little lacking in some of the pretenders. The closed alpha only featured one 4-act scenario, and four of the eight characters promised. Once again, which character you choose makes no difference to the gameplay, and only really affects which voice you’ll hear calling out the arrival of special mutants, incoming hordes, and the weapons and gear you ping for your teammates. 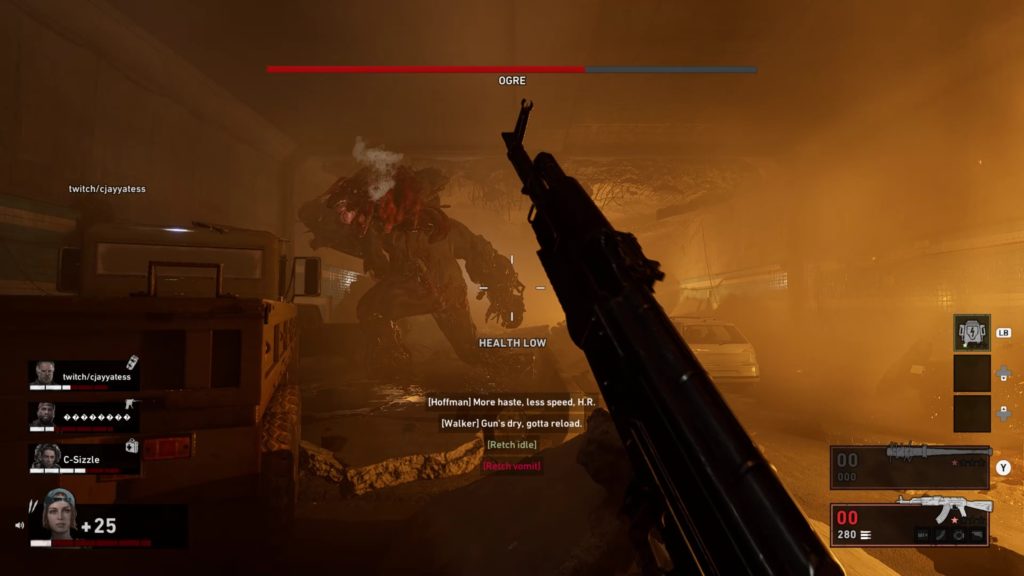 Even more than in Left 4 Dead though, you must work together. Wandering off alone or trying to be a hero will get you killed quickly, and if you’re clumsy enough to startle the flesh-eating crows and trigger a super horde you’ll probably all die. The AI Director returns again, to randomise the placement of loot, rooms in the map, the Safe House and special mutants. But there’s now something of a deck-building element to further increase the randomisation and replayability.

At the start of the scenario and between the Acts you’ll be able to select cards to build your Deck. These may be buffs to your movement or reload speed, or the ability to heal automatically when one of your teammates is in need of reviving. Some of them come with negative effects as a by-product, too, so you’ll need to choose carefully to maximise your effectiveness. 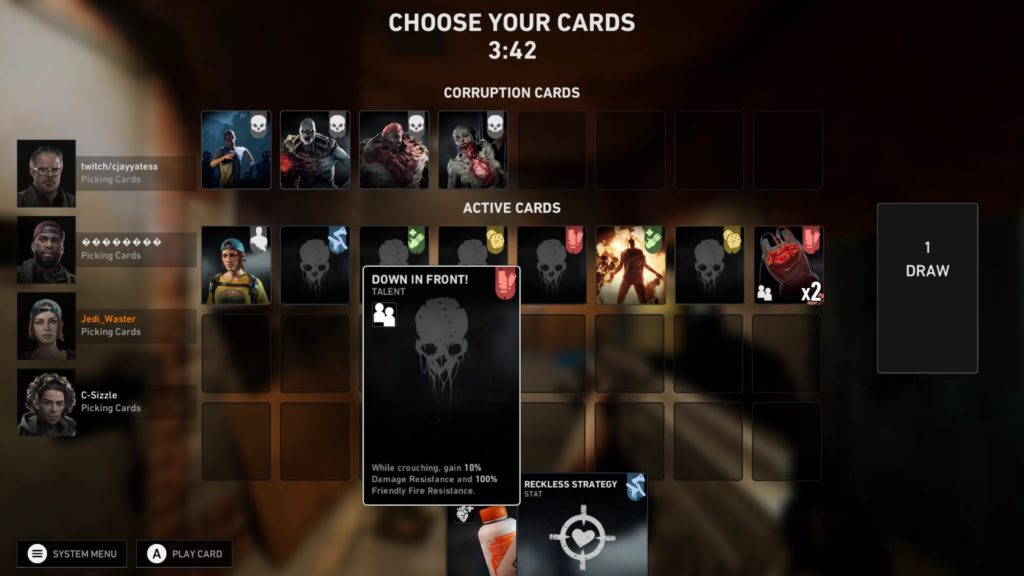 The enemy, so to speak, also has a Deck, which determines which special mutants will spawn as well as certain enemy behaviour. And the special Ridden are tough, although they don’t really do anything we haven’t seen before and there’s nothing quite as creative as the Witch or the Jockey so far. The Snitch, when startled, will trigger a horde; the Retch looks like a tank but is actually mushy, and will explode in a shower of blinding goo. The Tall Boy has a huge club fist, while the multi-limbed Hocker climbs on walls and spits something like webbing at you that must be struck with a melee weapon to remove. And then there’s the Ogre, a Ridden as big as a house that takes everything you have to drive back into the ground.

Whether more will be added in the full game, we don’t know, but it seems likely. After all, Left 4 Dead 2 introduced the Jockey and Charger specifically to punish players for putting their backs to walls or trying to shore up. Back 4 Blood will almost certainly follow suit – especially as, given that we live in the Age of the Live Service, Turtle Rock may add to this for a while following its release. 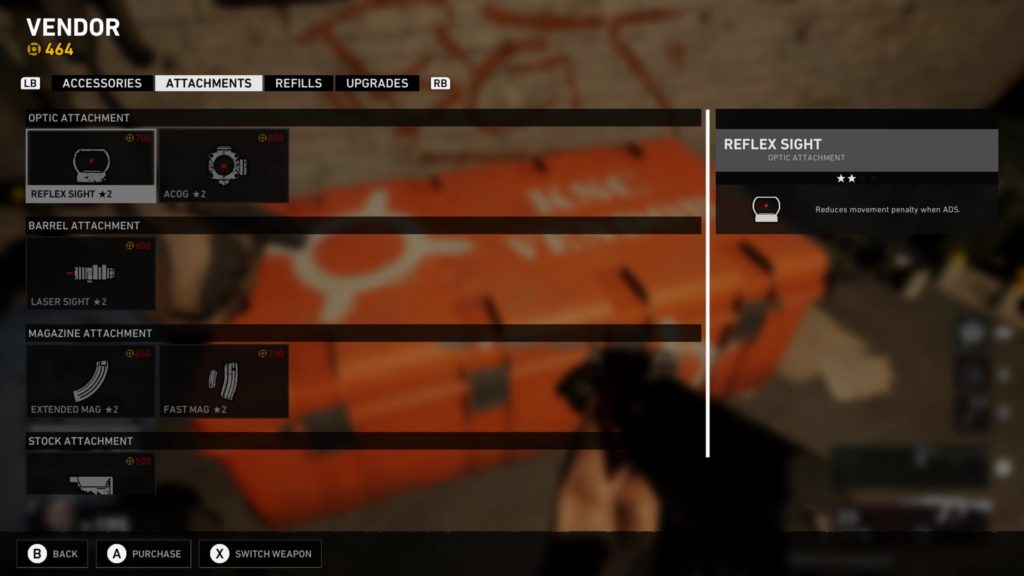 Another big change is the weapon economy. Instead of simply finding weapons in Safe Rooms, you’ll choose your starting weapon based on a card and upgrade it with Copper earned in the mission. You can add new sights, scopes, extended magazines and butts for stability, but you can only carry two weapons, which includes your melee slot. You’ll use Copper for everything else, too, including first aid kits, bandages, grenades, Molotovs, shareable ammo packs, and defibrillators.

Even this single mission has that same addictive flavour you’ll remember from the Left 4 Dead games, with the random elements adding to the replayability as you work towards the “crescendo event”, which in this case is radioing for help and making it across a destroyed bridge – again, similar to a scenario we’ve seen before but with a few twists to the formula.

There’s a lot of personality here, in the character interactions, the details in the world, the environmental storytelling. And there’s quality too, in the new deck-building element, the movement and ferocity of the horde, and the feel of the weapons and movement. For many, simply having this exact game made by this exact team is enough to sell it regardless, but in a genre that has grown ever more crowded in the long years since Left 4 Dead 2, will that be enough to satisfy everyone? We won’t know that for a while, unfortunately, but what I can tell you right now after a weekend of blasting through the Ridden hordes and failing way more than succeeding, is that Left 4 Dead is back in every way that matters.

Senior Content Editor Mick has been playing games for over 30 years and writing about them for around 12. After drifting from site to site for a while, settling briefly at the now-defunct Made2Game and freelancing for the gone-but-not-forgotten NintendoGamer Magazine, he came at last to rest at Godisageek. Mick has been a reviewer, staff writer and content editor here for some time, while also moonlighting a little for Red Bull Games. He has 4 kids, has written 2 novels, and sometimes even manages to pay a bill or two. You'll usually find him defending the galaxy in Destiny 2, battling evil in Diablo 3, or lurking in the background on Twitter. Find him there @Jedi_Beats_Tank, or on XBL (JediWaster247), PSN (Jedi_Waster) or Nintendo (JediWaster).
MORE LIKE THIS
Back 4 BloodLeft 4 DeadTurtle Rock Studios