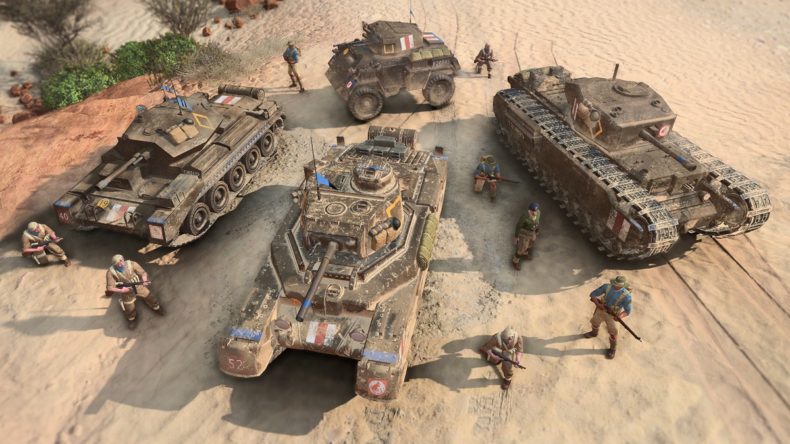 Relic Entertainment and SEGA have today announced that their popular RTS returns with Company of Heroes 3 releasing for PC on November 17 this year. The latest instalment is set to feature the “biggest and deepest single player experience in the franchise’s history.” There will be four playable factions at launch as well as two unique single-player experiences.

Fans who have been paying close attention to information about Company of Heroes 3 will know that the previously announced Italian Dynamic Campaign will offer a branching, open-ending experience. However, the North African Operation has also been revealed, and it’ll feature a more classically designed, narrative-led single-player experience. The new operation will allow tank driving for co-ordinated rapid-strike assaults.

Thanks to Relic Entertainment’s community feedback program, COH-Development, players can head over to the official website to play one mission from the newly revealed North African Operation. It’s free to play on Steam for one week beginning today, running until July 19. The Mission Alpha will give players the opportunity to control the infamous Deutsches Afrikakorps (DAK) and the L6/40 Light Tank. For those who have installed any of the previous two Pre-Alpha builds will see Mission Alpha appear automatically in their Steam library.

Players can also pre-order Company of Heroes to receive various bonus items at launch. The Digital Premium Edition comes with the Devil’s Brigade DLC, containing cosmetics based on the first elite commando units of WWII. The Physical Premium Edition comes with the DLC, as well as a Service Medal, Pocket Compass, Collector’s Book, and more. Both versions will also give players access to Company of Heroes 3’s first expansion which will be coming to Steam in 2023.

Video games are cool. Don't let anybody tell you any different.
MORE LIKE THIS
Company of Heroes 3Relic EntertainmentSega