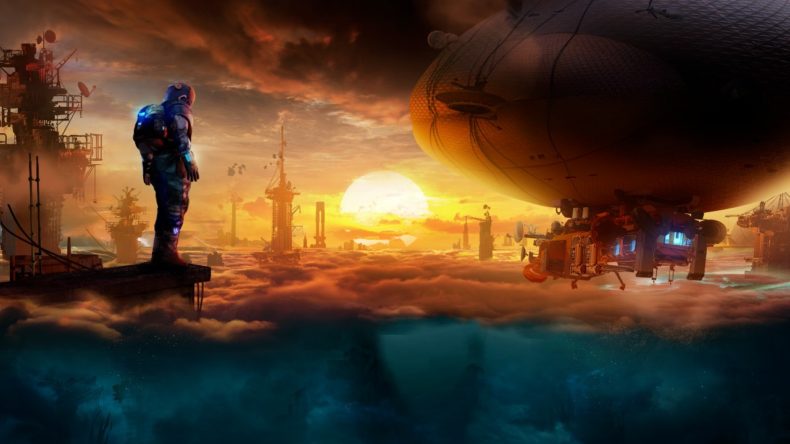 As much as I try to get into Survival games, there’s usually something that stops me. A lot of the issues I have come from how quickly you die from a lack of whatever makes your individual bars go up. You can starve to death in a day or two, or be utterly knackered after a few brisk walks to collect firewood that stops you freezing the instant the flames die out. It never really feels like you’re battling against actual elements, though, just a bloody-minded number generator that hates you. Based on first impressions, Forever Skies from developer Far From Home isn’t much different, but at least its harsh, post-apocalyptic hellscape seems like the sort of place that would kill you dead just for looking at it funny.

Obviously a game can’t spend weeks slowly killing your character from malnutrition, but some times survival sims tend to be a little oh-tee-tee with how quickly those damn bars get the better of you. In Forever Skies, the irradiated, diseased world in which you find yourself stranded killed my character around five times in the first twenty minutes of the demo. I died from falling off a gantry into the swirling clouds of vapour below; I died from exposing myself to the lethal Sunire radiation; I died from starvation when I forgot to pause the game while nipping to the loo (okay, that last one was entirely on me). My point is that if normal survival games want you dead, consider Forever Skies the equivalent of a very angry, very hungry wasp with a shotgun. 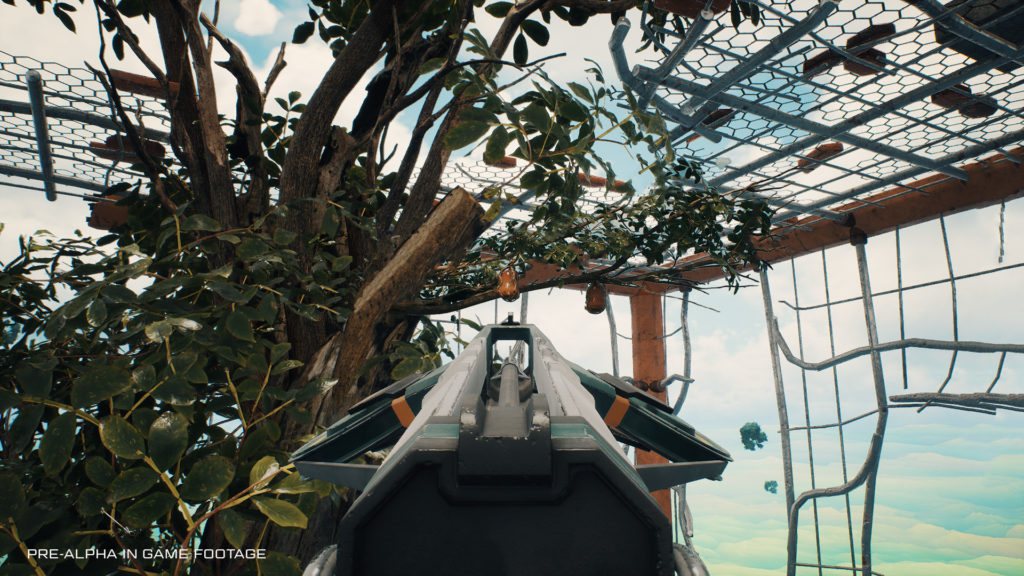 Waking up in the wreckage of a city, in a dilapidated tower high above the scorched earth, the first thing you’ll notice is that all your bars are half-empty and you’re dying. You exit your crashed pod and begin to head upwards, searching for hard-to-spot stairs, scavenging every nook and cranny for food and water. Drinking filthy water from pools and puddles is your first source of hydration, and you’ll find sunmelons that reduce your hunger a little.

There are bodies scattered about the place, datapads with journal entries that make almost no sense without context. The demo offers none, either, although Far From Home may well change this with the full release. Outside the crumbling walls of this teetering tower the world is a green nightmare, the sky filled with viral spores churned about by howling winds, a hell-world that will be familiar to anyone who’s spent a long weekend in Skegness. 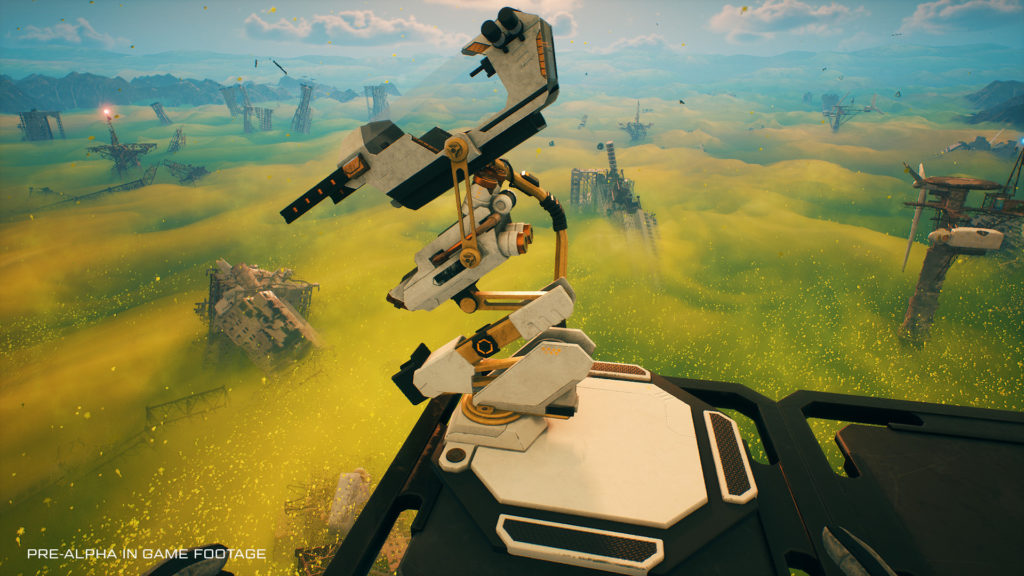 You steadily climb the tower, snatching up crafting materials and resources, small morsels of food and drink, scanning everything you see for information. Eventually you’ll reach the top and your potential salvation: a blimp, your very own dirigible ready to help you survive the filthy skies. Spending too long on that rooftop exposes you to the Sunire and will kill you in seconds, but if you’re quick you can load up the blimp with resources, including a fabricator, and get out of dodge.

I’ll admit to running around for a good quarter of an hour (during which I died again, this time from drinking dirty water to stave off dehydration) trying to place the fabricator. Everywhere I tried was red, and I assumed it had to be placed on a certain surface, possibly up high, or even combined with something else. As it turned out you have to place it inside the blimp, which I only found out by pure chance when I’d exhausted most other ideas and was ready to throw it all in. Hopefully this will be better explained in the full game, because as it stands, Forever Skies is lousy at telling you anything. While this does fit with the overall theme and atmosphere, it’s still bloody annoying. 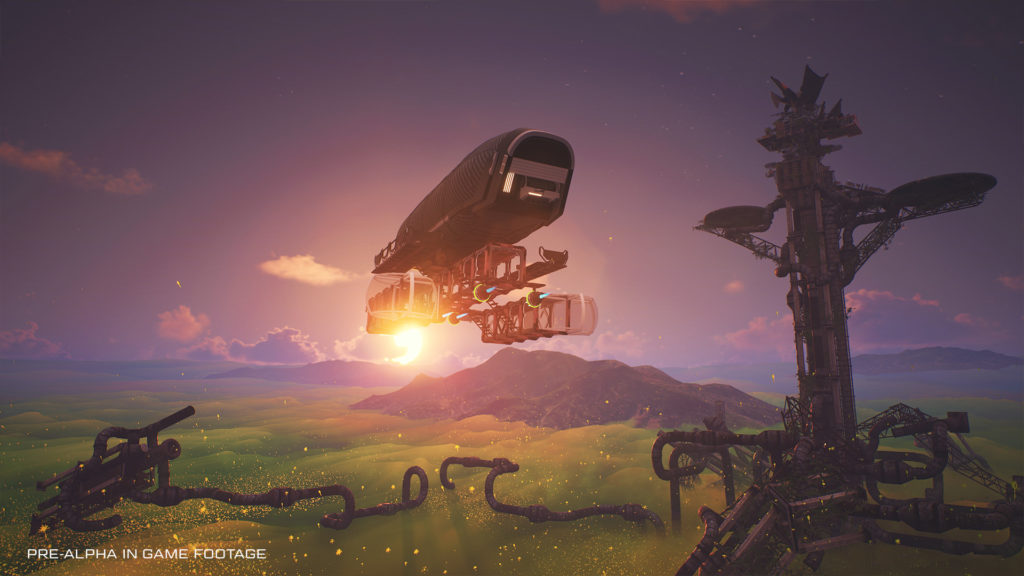 Although the demo didn’t allow for much time in the blimp, it became obvious very quickly that this is Forever Skies’ unique selling point. It takes a while to gather up the resources you need to get her sky-worthy, but once you’re in the air everything changes. Seeing the ruin from above is quite something, as rusted structures jut from the poisonous clouds like broken teeth. Whatever destroyed the Earth did one hell of a number on it, and it’s even more evident once you’re looking down.

The game becomes less about desperate survival and more about stockpiling, forward planning, and exploration. You’ll need to prepare food, harvest water, and get a feel for your surroundings. What kind of external dangers you’ll face in the full game remain to be seen, but hopping between the ruined husks of civilisation to pick them clean for resources, and steadily improving your ability to do so is an intriguing gameplay loop and one I’m looking forward to exploring more deeply when Forever Skies launches later in the year.

Forever Skies is coming to PC early access via Steam in 2022.

Senior Content Editor Mick has been playing games for over 30 years and writing about them for around 12. After drifting from site to site for a while, settling briefly at the now-defunct Made2Game and freelancing for the gone-but-not-forgotten NintendoGamer Magazine, he came at last to rest at Godisageek. Mick has been a reviewer, staff writer and content editor here for some time, while also moonlighting a little for Red Bull Games. He has 4 kids, has written 2 novels, and sometimes even manages to pay a bill or two. You'll usually find him defending the galaxy in Destiny 2, battling evil in Diablo 3, or lurking in the background on Twitter. Find him there @Jedi_Beats_Tank, or on XBL (JediWaster247), PSN (Jedi_Waster) or Nintendo (JediWaster).
MORE LIKE THIS
far from homeForever Skies