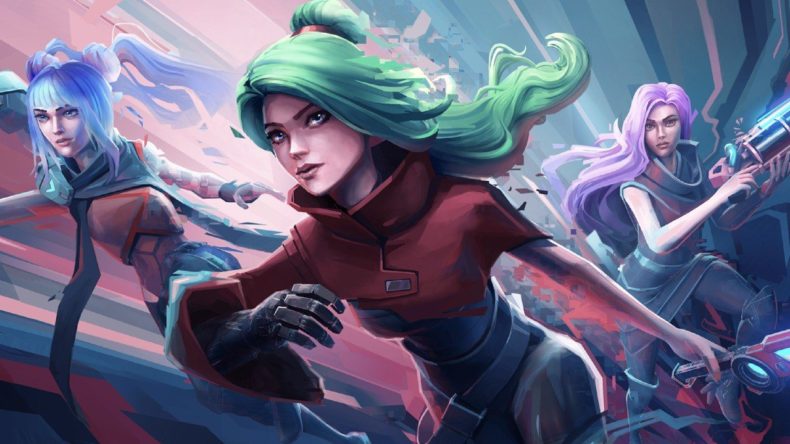 Trinity Fusion has a pretty cool concept. You play an individual known as the Hitch-hiker, with the ability to hop between three alternate versions of herself. The upshot of this is a roguelite action game with three distinct paths and three different characters, each with their own abilities, who share XP and upgrades even as you jump between them.

What’s not entirely clear at this point is how. Or why, for that matter. I’ve spent a few hours with the Trinity Fusion closed beta both on PC and Steam Deck, and while I can tell you that what I’ve sampled plays well, I can’t tell you a whole lot more. It’s a 2D action game with a roguelite loop, but from what I’ve seen there are no Metroidvania elements. 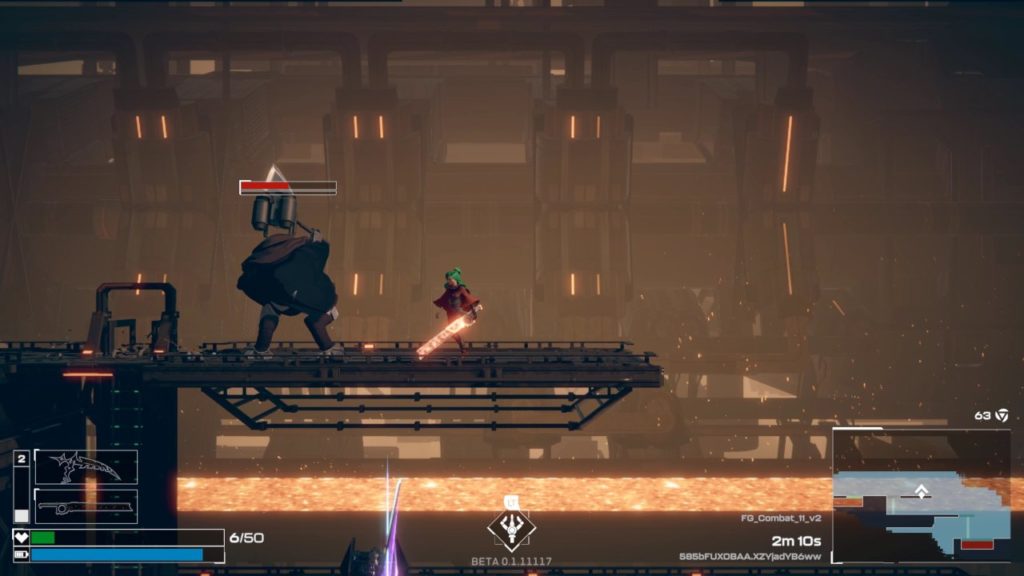 Each of the three incarnations of the Hitch-hiker play differently. While basic movement and melee combat feel the same, they have unique abilities. There’s Altara, who wields a melee weapon and a magical spell. She can double-jump, and has a little drone that you can move independently of her to teleport you to hard to reach areas. Then there’s Naira, who wields a ranged weapon and a melee weapon. She can wall-jump up narrow passageways, and double-jump, but doesn’t have a traversal gizmo like her trans-dimensional sisters. Finally, you can choose Kera, who’s entirely melee-focused and can’t double-jump, but uses an energy leash to swing from grapple points or pull enemies towards her.

Slightly disappointingly, each has their own separate campaign path. The trio seems ideal for some Trine-like level design, hopping from body to body to tackle obstacles and bosses in all the stages. Instead, the action is limited by its own core concept: you have to play each level a certain way with a certain character, and that’s that. The only time you can switch between them is at the boss fight, but the main boss in the beta doesn’t have any particular abilities or obstacles that require a particular talent. You just chip away at its ridiculous health bar while trying to avoid being squashed in a few hits. 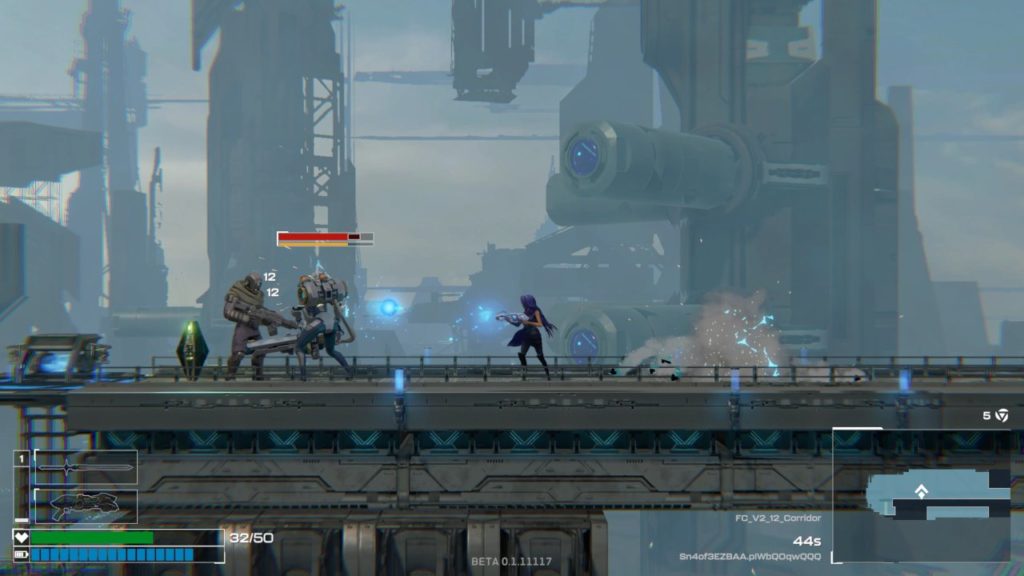 Which brings me to my main issue with Trinity Fusion: at this stage, it just doesn’t feel balanced. And that’s not me complaining it’s too hard for me. It’s most similar in combat design to Dead Cells. There’s a huge variety of enemies and lots of different weapons, but the Hitch-hiker has almost no defensive capabilities or options to build that way. You can collect blue orbs that allow you to unlock permanent Psychic Upgrades shared by all three avatars, and one of them is Regain.

This activates a passive trait borrowed from Bloodborne, which allows you to regenerate a coloured portion of your health bar by landing quick retaliatory attacks. However, the window is unbelievably tight, the regenerated percentage far too stingy, and most enemy attacks have a knockback or stagger effect that means you simply can’t land a follow up attack. Aside from that, all you can do is slide through enemies, which grants i-frames but which is of less use when you’re facing multiple enemies with wildly different attack patterns, all on a 2D plane. 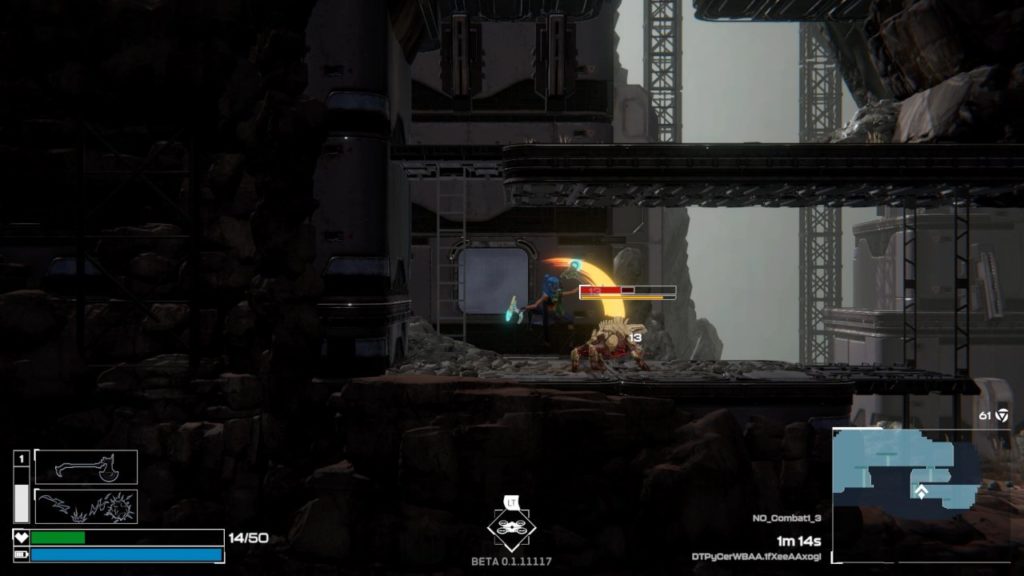 I enjoy the challenge often promised by this genre, but this just doesn’t feel fully balanced at all. Add to this that you start with a tiny health pool and, while it can be extended, pick-ups are rare. You can find one-use health kits among other secondary items like dash-uppercuts and such, but they often only return 10 or 25% of your health.

At present, Trinity Fusion is very young. It’s lacking a lot of variety in terms of run-specific buffs, and its universe really needs context. That will all come with the full release I’m sure, but it doesn’t help in a closed beta. Perhaps most importantly though, is that it feels great to play. The characters move well, combat is relatively simple and there’s a ton of different weapons even at this stage.

It also looks gorgeous, the various stages reflecting strong, singular themes like a factory, a rocky tundra, and a cyberpunk alien city. Character design is striking and there’s a great selection of enemies, from huge alien beasts to deadly machines and robots. If nothing else, Trinity Fusion has my attention. It needs some work, but if Angry Mob stick the landing it could be a great addition to the genre.

Trinity Fusion is due for release on PlayStation, Xbox, and PC in 2023.

Senior Content Editor Mick has been playing games for over 30 years and writing about them for around 12. After drifting from site to site for a while, settling briefly at the now-defunct Made2Game and freelancing for the gone-but-not-forgotten NintendoGamer Magazine, he came at last to rest at Godisageek. Mick has been a reviewer, staff writer and content editor here for some time, while also moonlighting a little for Red Bull Games. He has 4 kids, has written 2 novels, and sometimes even manages to pay a bill or two. You'll usually find him defending the galaxy in Destiny 2, battling evil in Diablo 3, or lurking in the background on Twitter. Find him there @Jedi_Beats_Tank, or on XBL (JediWaster247), PSN (Jedi_Waster) or Nintendo (JediWaster).
MORE LIKE THIS
2d Platformerangry mob gamesTrinity Fusion