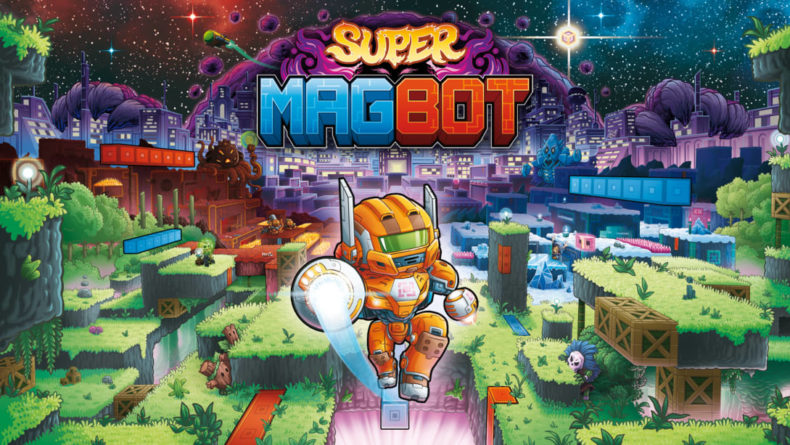 For those who crave a jumping challenge, there are plenty of ultra hard 2d platformers to test yourself against. From OkunoKA Madness to Scoot Kaboom and the Tomb of Doom, every year we get new additions to the masocore genre. It’s becoming increasingly important for each of these games to do something unique to stand out from the crowd. Super Magbot absolutely manages to do that, by being a platformer without jumping.

The system of Magnetia is under threat from the evil Magsteroid. Our magnetic hero is the only one who can stop him. Across the four worlds of Magnetia you’ll have to use his magnetic powers to save locals and eventually the world. The story pretty much takes a backseat to the gameplay. However, the charming characters never feel like they get in the way of the action. 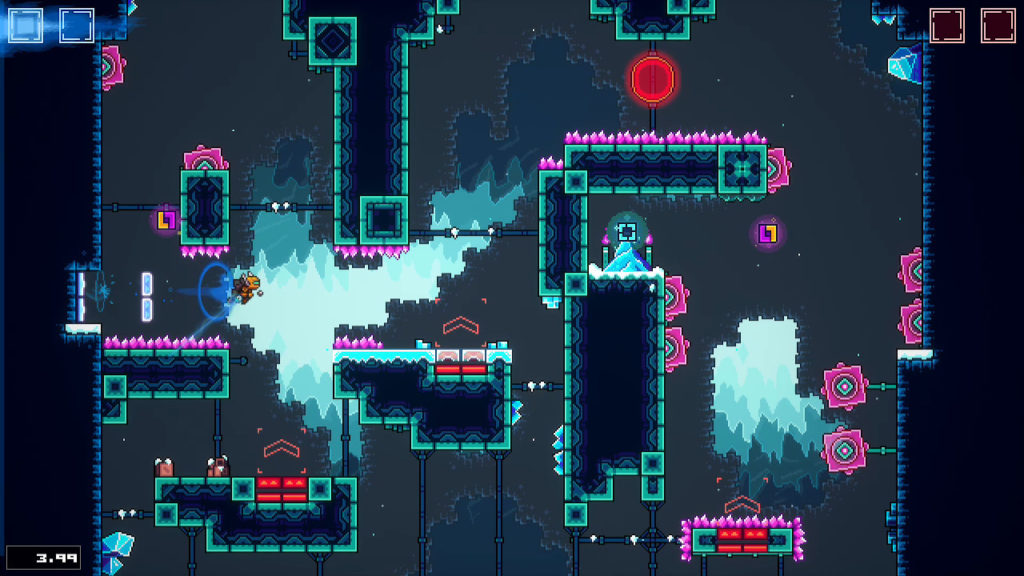 Since you don’t have the ability to jump, you’ll have to improvise using the power of magnets. Each stage in Super Magbot is littered will red and blue surfaces. They are handily placed so you can attract or repel yourself from them. The right analogue stick is used to point your magnet gun in the direction you want to use. The shoulder buttons contain blue and red polarities for you to activate. You’ll shoot upwards is you fire at the red floor underneath Super Magbot. The first few tutorial levels with teach you everything you need to know about magnets.

You’ll be using your polarity powers to do much more than simple jumps. By attracting to magnets on walls you can scale them. By shooting at ceiling magnets you’ll be to stay in the air for even longer. It won’t be long before Magbot is propelling around the environment like Spiderman, as long as your timing is on point.

Getting past the standard flaming pits and saw blades will take a lot of skill and perfect reaction times. Super Magbot is an extremely tough game. By the time I reached the second world I was seriously sweating. If you’re up for the challenge though, there’s little more satisfying than finally nailing that last magnet pull to reach the exit. 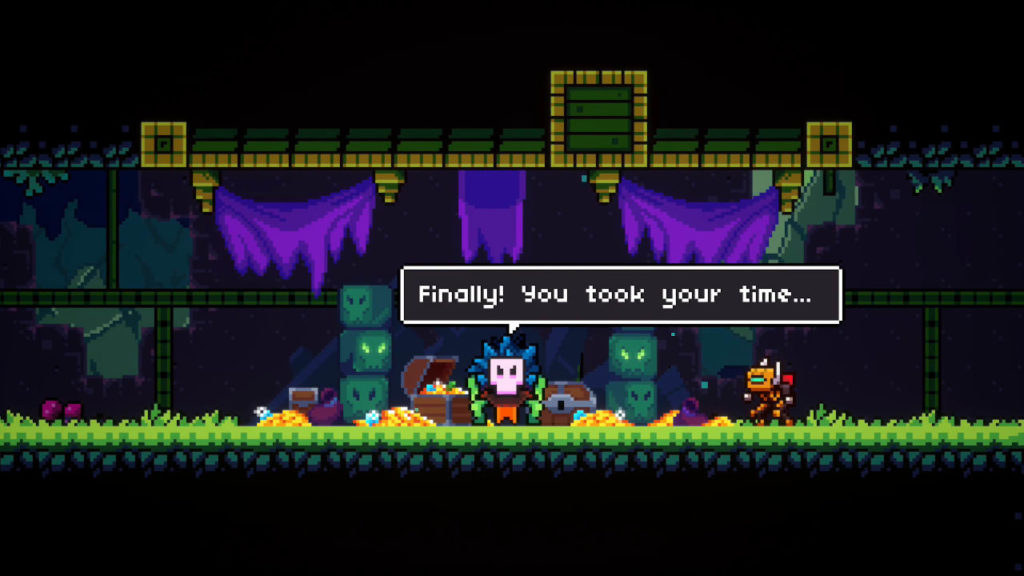 Mastering how to use magnets on standard surfaces is a challenge, but the addition of other types of magnetic objects really spices things up. There are walls that break once you use your powers on them, double layered magnets that sent you soaring, and bubble magnets that you can enter and then burst out of. It never takes more than a few levels for Super Magbot to throw something new into the mix, often with deadly repercussions.

When you manage to make it to the end of a world, a screen filling boss fight awaits you. I was sceptical that these battles would be as enjoyable as the standard stages, but they turned out to be my favourite part of the Super Magbot . Dodging is the name of the game here, and if you survive long enough you’ll be able to take advantage of a weak spot and eventually even win.

If you somehow still want more challenge, there are collectables to snag in each level in hard to reach places. I managed to grab them all in the first world, but it became too hard for me pretty quickly. When you beat a world you’ll also get access to some even harder bonus levels, so if you’re a platforming god there’s plenty of tricky content for you to gorge on. 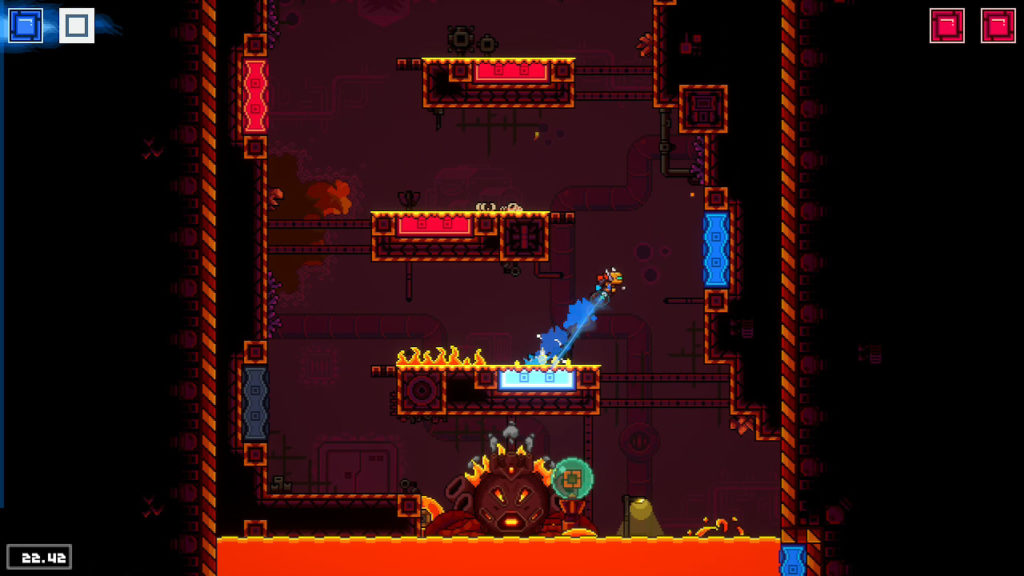 While you’re repeatedly dying, you’ll fortunately be treated to some delightfully smooth animations and a banging soundtrack. Each world has a completely different colour palette to feast your eyes on, and sometimes it’s nice to take a moment to appreciate the glowing embers instead of falling into the lava producing them.

Too fast at times

The only issue I had during my time with Super Magbot was when performing some of the faster mid-air manoeuvres. Because everything goes so fast it seems like you have to input commands before you need to. It’s really hard to get used to, and just doesn’t feel right.

Super Magbot is a unique and challenging 2d platformer, with interesting new mechanics consistently mixing up the gameplay. Its magnet based platforming is easy to learn but hard to master, with plenty of tricky content to test your skills on. If you’re up for the challenge, you’ll find a lot to love about this little metal robot.

Super Magbot's unique magnet-based platforming and constant new ideas are well worth experiencing, if you can handle the challenge.