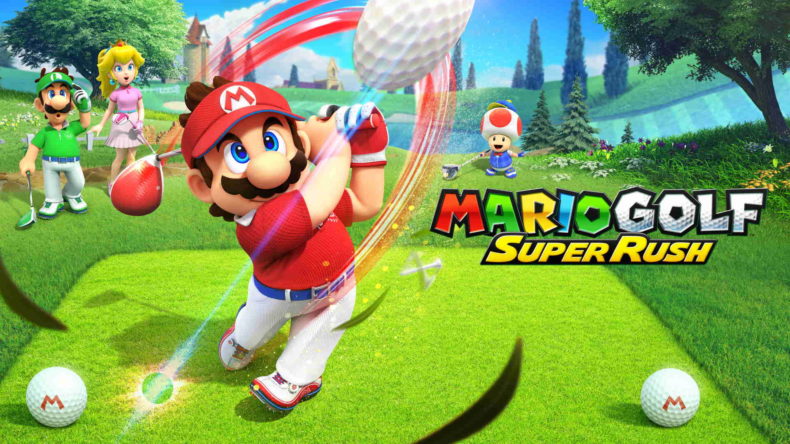 Mario Golf: Super Rush is a very strange game. On the one hand, the single player is bizarre to the point of almost feeling unfinished. It’s over before it begins, and serves as a tutorial for the rest of the meat of the game. And that’s the other hand: the multiplayer. An exquisitely designed mish-mash of arcade golf and ludicrous fun, and where Mario Golf: Super Rush truly comes to life.

To be clear, this isn’t exactly unfamiliar territory, and I suspect Super Rush will have a similar life as Mario Tennis Aces. Like Aces, the adventure mode is where most people will start. Also like Aces, it’s a glorified tutorial. So much so that it’s over halfway through before the game teaches you how to do lob shots. To labour the point some, it also has occasional difficulty spikes that frustrate. But they’re nothing compared to Camelot’s Tennis game, in fact, in spots, Super Rush is perhaps too easy.

The adventure gets off to a promising start

At first, I thought Camelot and Nintendo were aping the wonderful Golf Story. You create or use one of your existing Miis (no, really!), and start off as a rookie in the world of Mario Golf. Encountering some of Bowser’s minions, they will charm you with their usual soundbites. That said, the humour that is usually prevalent in the spin-off Mario games is sorely absent throughout this one. 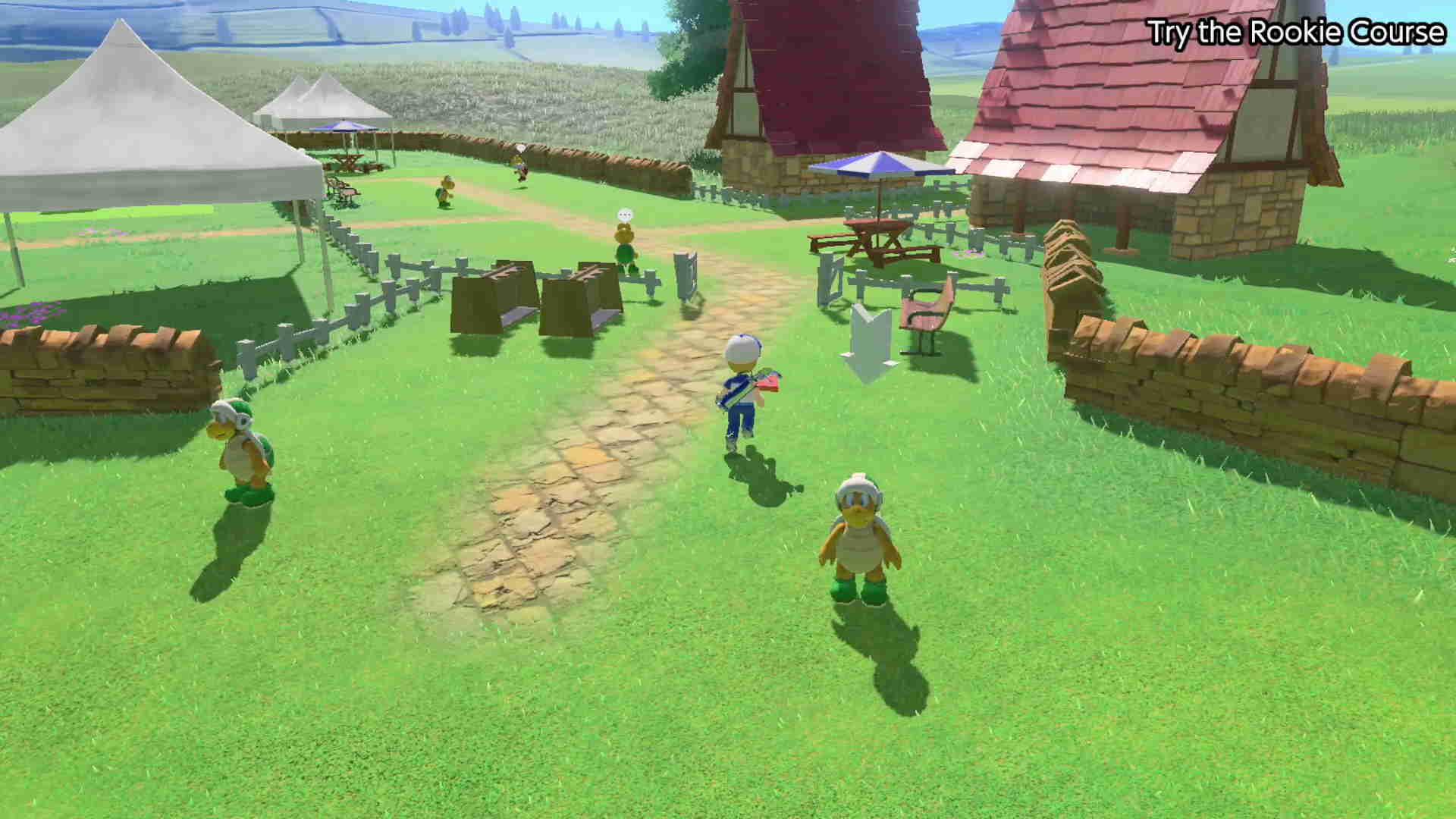 It’s a big map to begin with, and there’s plenty of Mario-universe characters to speak to. It’s all incidental and flavour dialogue, mind you. The crux of the story begins with you as a rookie, playing with other rookies like Boo and Chargin’ Chuck, and making your way up the rankings via graded medals.

Boss fights in a golf game?

There are boss fights which are nice diversions, and there are challenges too which often reward you with a new power. There’s also a persistent leveling up mechanic that you progress down just by playing. Success or failure will give you XP, but obviously the former gives you more. I was over level 60 when I saw the credits roll, and I felt like my Mii-golfer was pretty good. 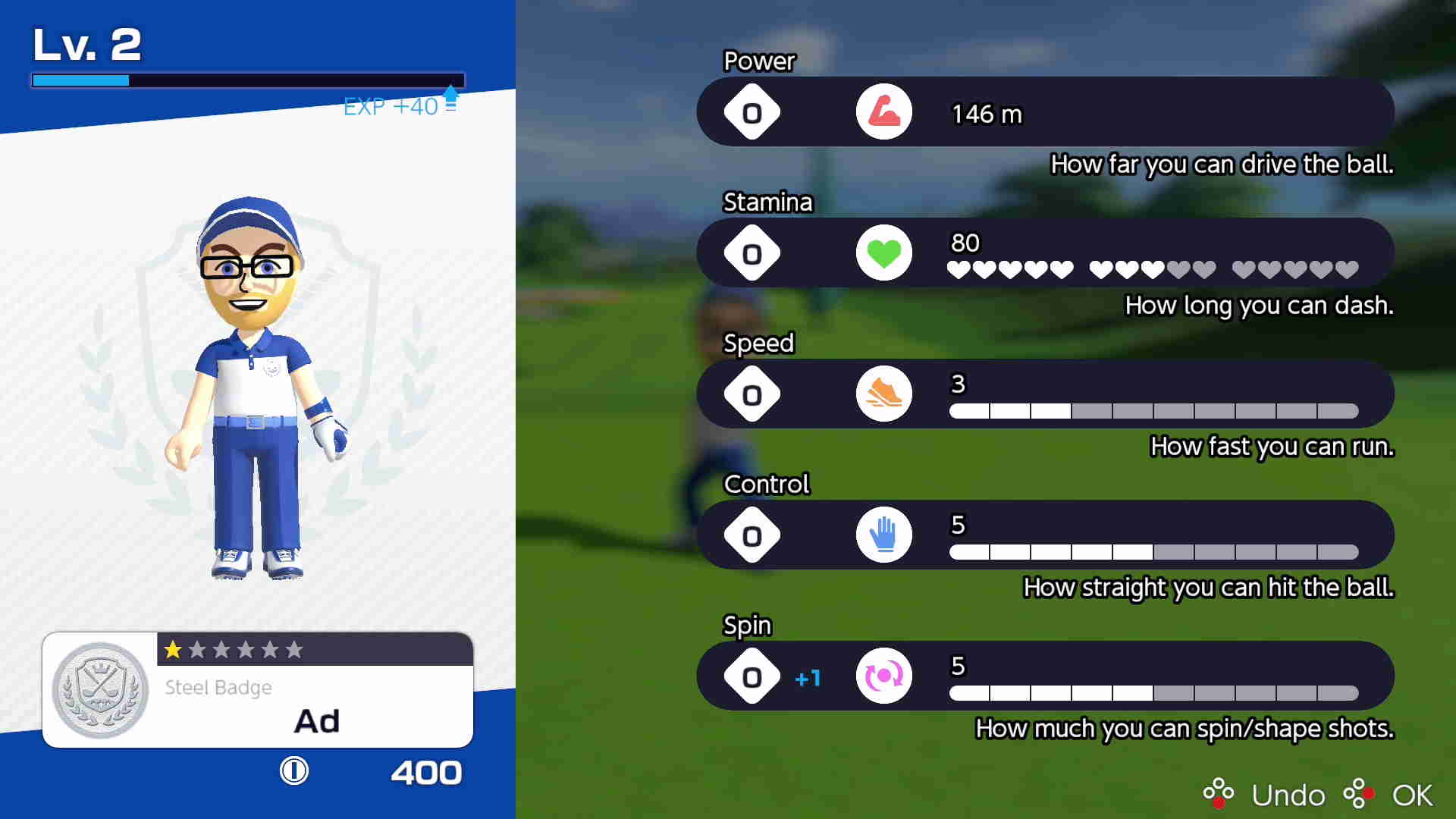 Each level gives you a point to put into strength, spin, control, speed, etc, as you’d expect. The Dash mechanic comes in very early, and is a large part of the gameplay. Super Rush isn’t a game that wants you to spent too much time on your shot. In fact, most modes have a timer running, and after you play a shot you’ll be required to run to your ball. You can hold “B” to run faster, but you can hit “L” to use your stamina bar quicker for a massive dash.

This dash (which upgrades via the story) allows you to bash others out of the way and get to your ball much quicker. Each character has their own form of it, and they have varying uses. For example, my Mii ended up with one that jumped into a twirl, meaning I could leap over water, though it’s a risk to do so. Rosalina seems to hover, so she too can get across obstacles quicker, though her movement overall is slower. 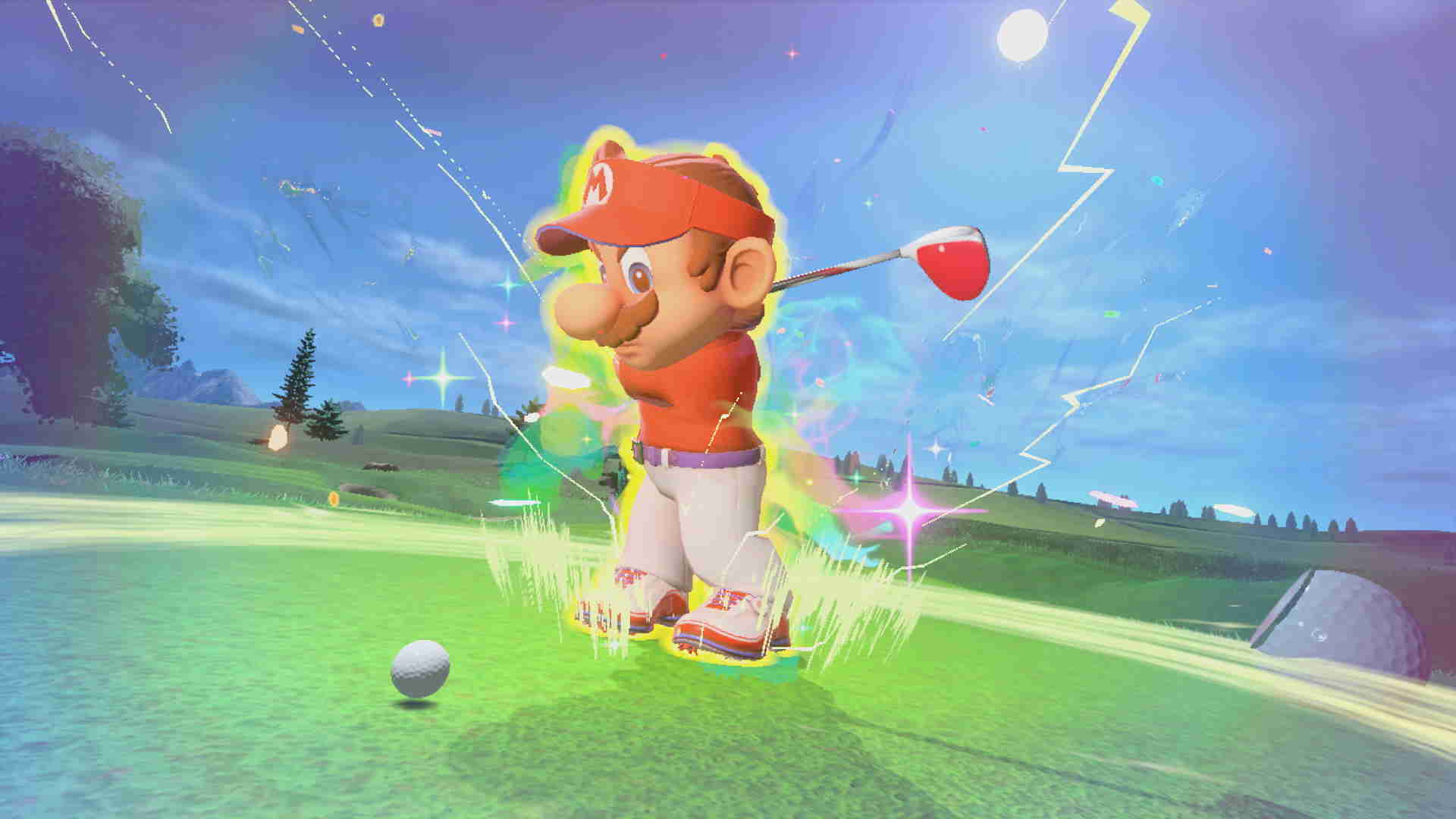 In fact, all the characters have unique skills and can be upgraded just by playing. Part way through the adventure mode you also gain access to a super shot. This uses magic that is built up through good play and excellent putting. When fully charged you can use the super shot and it’ll smash through barriers, or generally cause havoc. The amount of times I got bombed by a super shot when I was in a nice position on the green shows that some of that frustration will always be present in Mario sports titles.

As you’d perhaps expect, Mario Golf: Super Rush doesn’t contain traditional golf courses. Yes, they start with you teeing off and end with a putt. But in between you might find Bob-ombs on the course that you can detour to and fire at your opponents. Or maybe the part of the course you want to land your shot on is electrified, so you’ll have to play shorter. Then there’s those opponent skills, who can make it so your pin-marker vanishes, so you have to use your eyes and read the lay of the land to assess the distance of your shot. 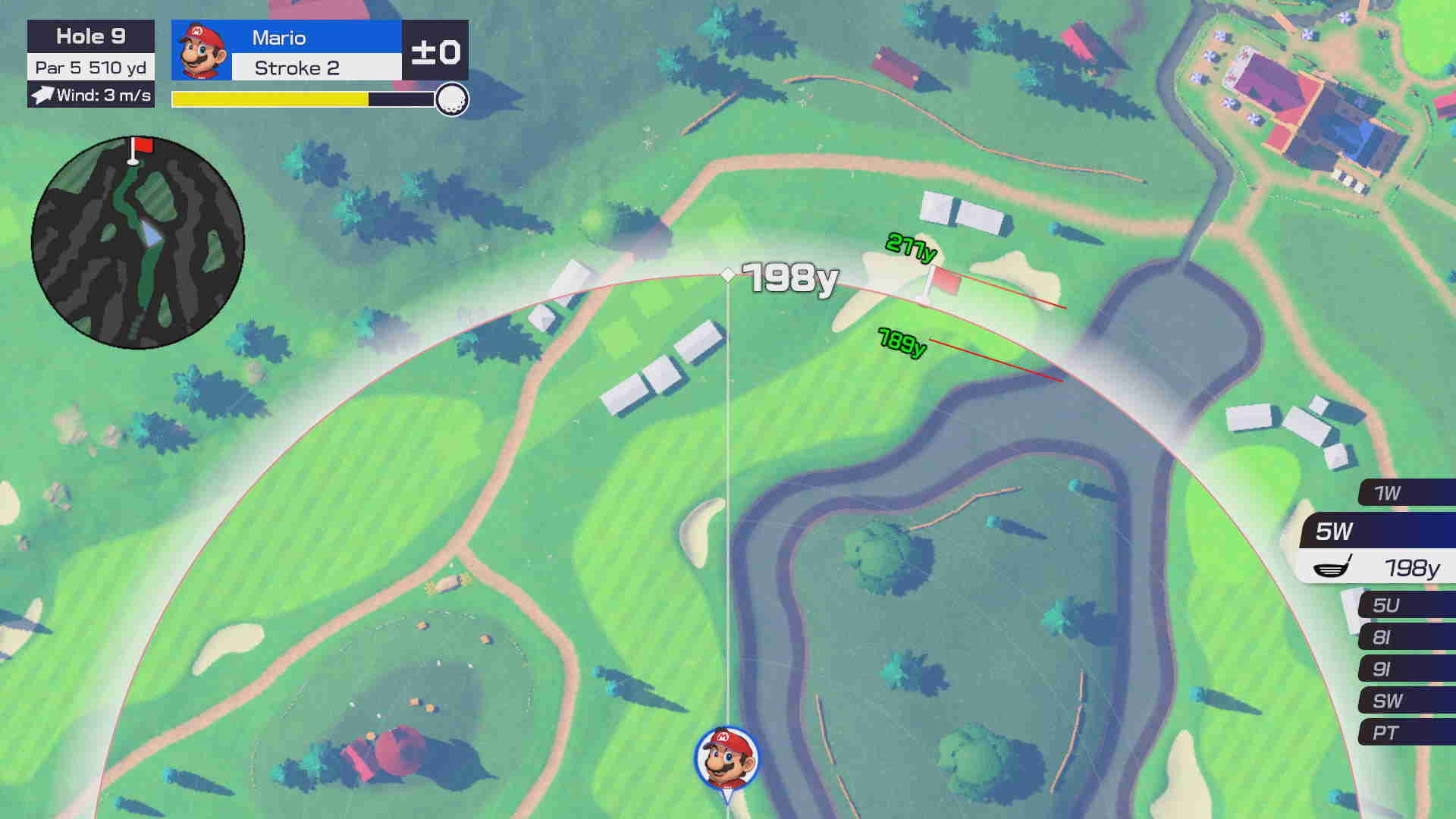 It’s of varying degrees of difficulty, then. Some courses will infuriate, and some will wow you. The first time you’re introduced to “Cross country golf” I’d argue will be the moment some people lose their temper. Here, you have any number of pins to hit on your round, in any order. Where you land the ball, is where you play. So when you finish a hole, you just carry on. Some of the steep inclines here force you to use the environmental hazards, such as tornadoes, to reach the next pin. It’s the first challenge to overcome, and I suspect those wanting a traditional golf game will check out there.

The modes are what elevates Mario Golf: Super Rush, really. Battle Golf throws you into an arena and is a smaller version of Cross Country Golf, while Speed Golf itself has two modes within a mode. You can go on points, whereby each stroke is 30 seconds, and is added to your time overall. Or you can go on pure time, meaning it doesn’t matter how well you do if you’re the slowest. 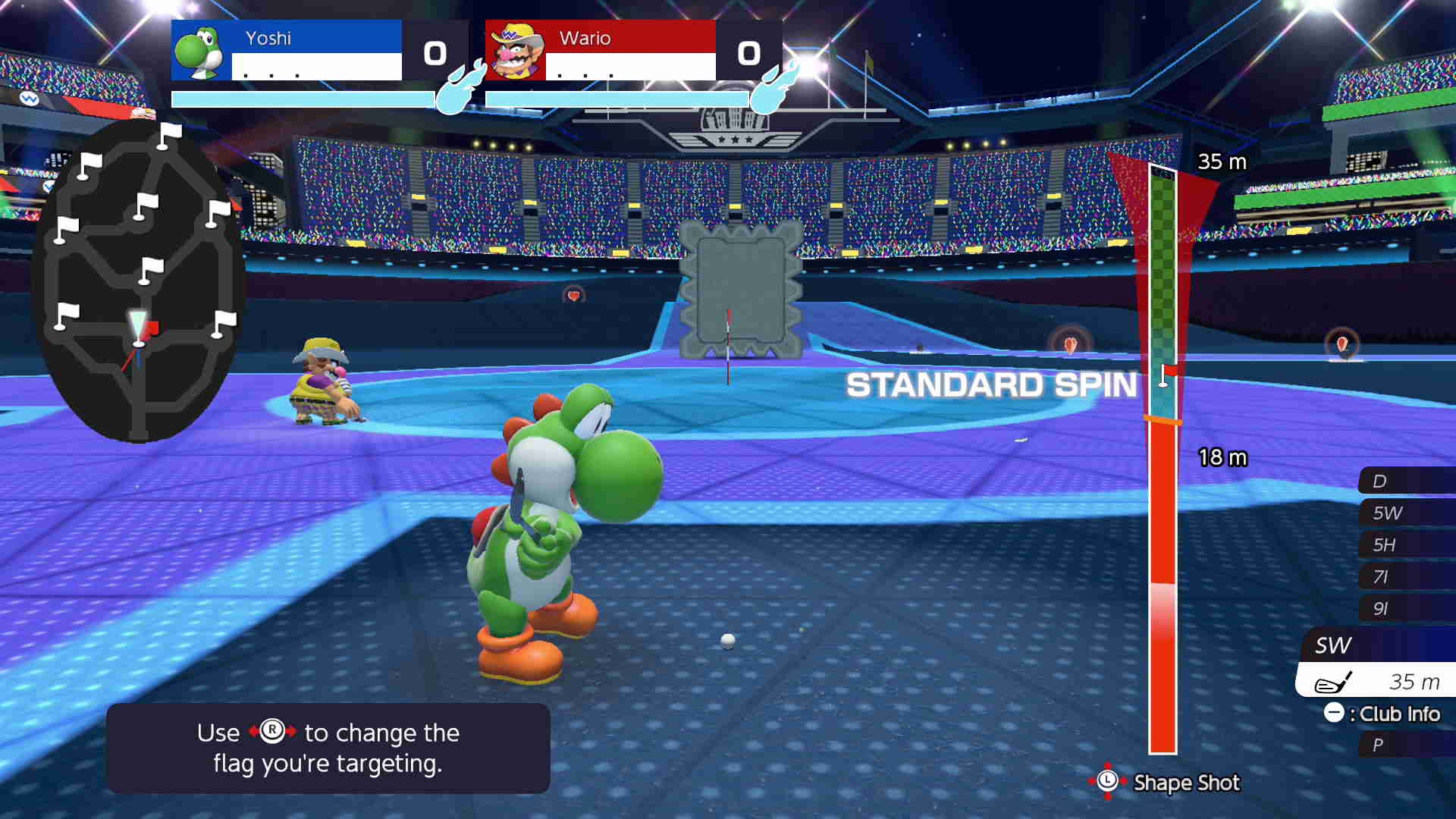 Adventure mode is worth playing, but it seems very safe, eventually getting weird a little too late. Mario himself is woefully underused, but it’s nice to see Wario and WaLuigi getting some attention. But it feels a little strange at times. It could be the fact you’re playing as a Mii instead of a Mario-character, but it almost felt like it was a non-Nintendo sanctioned thing. Just a little bit off, throughout. There’s time saving options put in, but also there’s just lots of walking between courses.

You can play the entire single player mode without spending your coins on clubs and clothes in the pro-shop, either. While they might offer protection against lightning on the courses, or any of the myriad other things that will try and ruin your golf-fun, they feel superfluous, really. The campaign finally gets going, then it’s a boss fight and credits, and… that’s it. It just felt like something to do when you aren’t playing multiplayer. 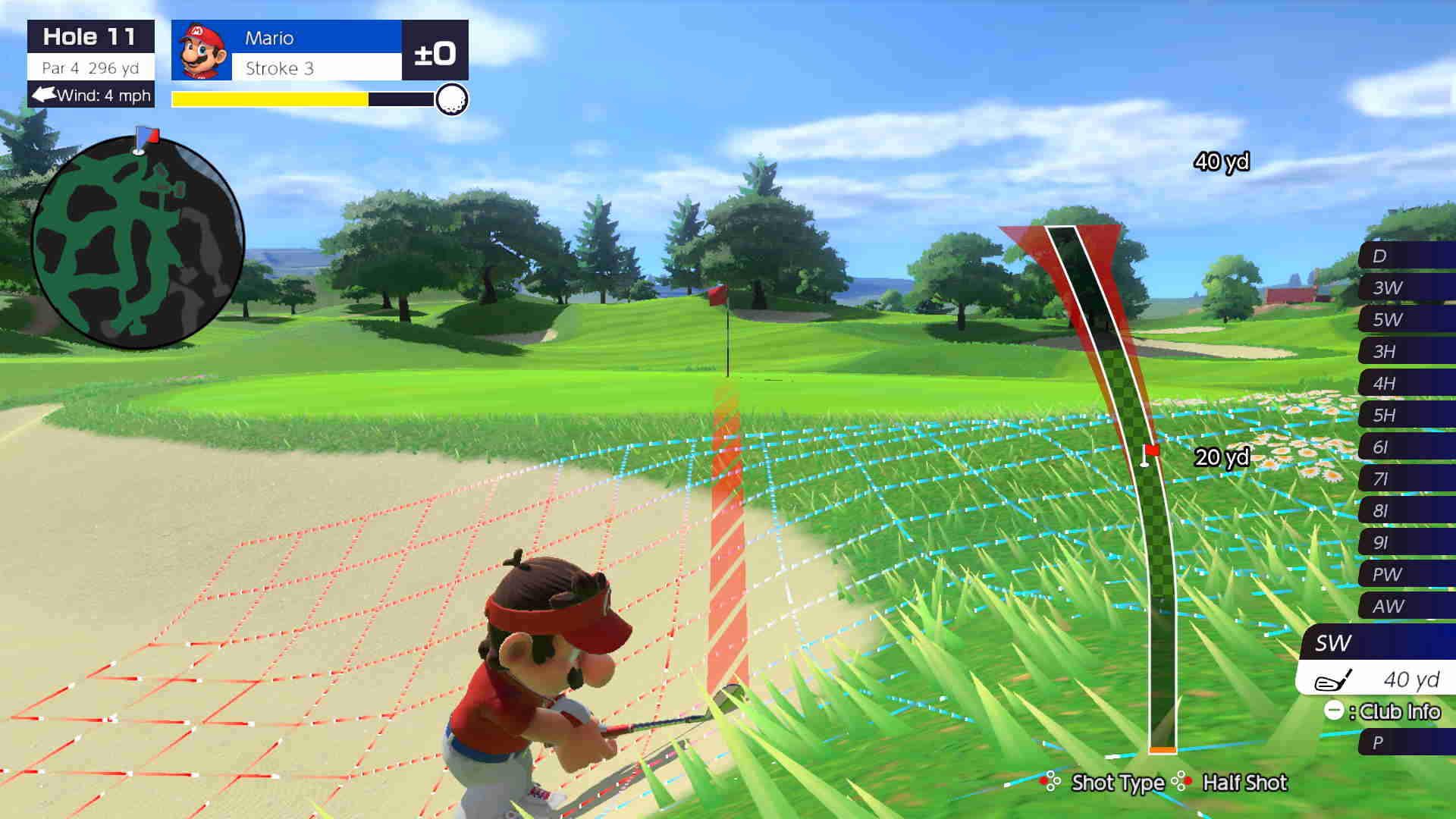 That multiplayer, however, will be as popular as Mario Tennis Aces still remains today. It’s glorious to play with friends and family. The one-button shot control makes it easy to pick up, but the shot curving, top/back-spin and super mechanics make it a fun game to learn. The Mario characters themselves have differing levels of skill, power, curve, and control, too. This means Yoshi is fast on his feet, but doesn’t have much ability when it comes to curving around an obstacle.

Playing with your Mii, who you’ve built up to have major control and swerve (though I found 2 bars of swerve were enough) is rewarding. Being able to power your shot, then hold left on the stick to get major fade or draw around a 10-foot tall Pokey is immensely satisfying. Likewise, once you learn how to lob, and the timing mechanics are introduced… well, I won’t spoil the fun here.

Mario Golf: Super Rush is a terrific game with friends. It’s also mechanically thoughtful and rewarding. It’s only really let down by the fact that outside a fairly lackluster adventure mode, you will need to get online, or play locally. I couldn’t shake the feeling the entire time that it felt a bit like a second tier game, as though it was lacking some polish. But it’s a tremendous arcade game of golf that will keep us all busy until we get a new Mario Strikers, because that has to be next, right?

While the single player adventure is a little underwhelming, Mario Golf: Super Rush is a terrific multiplayer experience I can see being added to over the years. Next up, Mario Strikers, right?