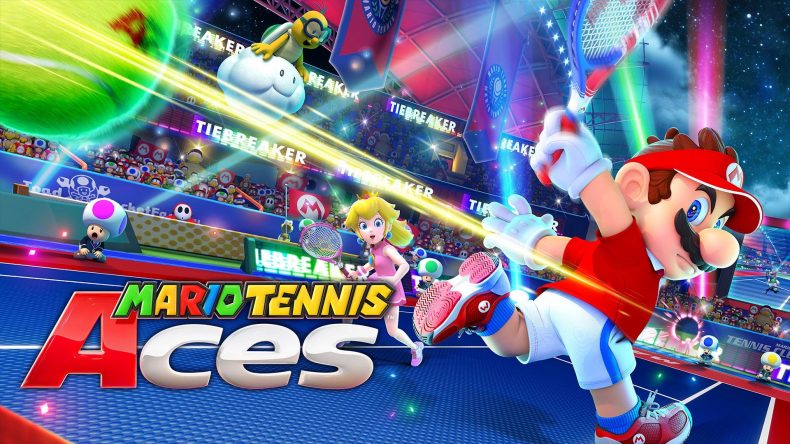 It’s been a while since we’ve had a tennis game worth getting excited about, serious tennis sims have all but disappeared, and Namco’s Smash Court series is as dead as dead can be. We did get a Camelot developed Mario Tennis game on Wii U, but a lack of content really made it hard to like that game at all, and so, with Nintendo’s Switch, Camelot try again with their mascot themed Tennis game, and, it’s good.

Let’s start at the beginning, because that’s where the game starts when you boot it up for the first time. From the off you’re plunged straight in to Adventure mode, the game’s new story based content, and in the Pantheon of dumb video game stories this one really takes the cake. After Mario and Peach beat Bowser and his child unit in a Tennis final, Wario and Waluigi turn up and wind up getting Luigi possessed by a sentient, all-powerful tennis racket named Lucien. What follows is a quest to gather the power stones to stop the racket from once again ruling the world. In this version of Mario’s world everyone wants to settle disagreements and conflict with tennis matches, and you need to play along to get anywhere. What this amounts to is a lengthy tutorial that teaches you how to play the game, and it does this well to begin with, but before it ends it can very nearly put you off completely.

Now, this could sound like the griping of someone who couldn’t understand the game’s intricacies, but you’ll need to bear with me here. The actual tennis that you’ll take part in the game is good. The shots all have their counter shots meaning you’ll need to pay attention to the stream behind the ball and judge the shot you need to hit back -a slice counters top spin, a flat does so for a flat – while pressing a shot button early will allow you to power up a shot that will be hard to return, but requires you to position yourself early. The game’s special shot gauge is a decent addition too, I was worried that it was over-complicating things, but that turned out to not be the case. As you rally or pull off charge shots the meter fills, and this meter governs your ability to hit zone shots (a targeted shot), use zone speed (slow down time to reach shots you would otherwise miss) or to use your character’s special shot (activated by pressing “L” with a full gauge). While it seems like a bit much, games can reach a great tactical level where you feel each other out keeping your meters so you can slow time to return a zone shot before following up with one of your own when the ball is returned after, when these rallies occur they’re really exciting and when played with someone in the same room they’re even better.

What is disappointing with this mechanic is the inconsistency with which you’re awarded charge. You can get it from rallies and charge shots, giving you extra reason to make judgement calls on returns to you, the problem is your racket. These shots are really hard and if a receive isn’t timed correctly then your racket takes damage, too much damage and it breaks, lose all your rackets and it’s an immediate loss. The actual timing window is slim, but practice will see you right, and with zone speed getting this window is much easier, but a successful block does not award you charge for your gauge, potentially leaving you gauge poor and unable to launch a counter attack. Now, let’s go back to the Adventure mode; here you’ll find the AI opponents get charge much easier than you do, and you can find yourself constantly on the back foot as a result. Not only that, but every match barring the finals take place on gimmick courts that serve to completely frustrate you. Many of the matches take place on the deck of a boat with a mast in the middle, which the AI makes a real habit of hitting. The perspective of the match makes it so you cannot tell if the ball will hit the mast or not, meaning you cannot make a judgement call, and many a time you cannot react in time to return. It’s even more annoying when the AI manages it after a serve, leaving you floundering with no chance of interception.

You could expend your gauge to help make those shots, but then you’ll find yourself up against the wall with an AI ready to pepper you with zone shots again and again and again. I’m being serious, I had one opponent play a zone shot every two shots for ten strokes while I was doing all I could to stay in contention – you really need to be lucky to be successful. Couple this with a finale that requires you to best two stages in one attempt, otherwise you must do it all over again and you’ll be wondering why you’re even bothering. I can honestly say I’ve never had a game make me as angry as Mario Tennis Aces did, I can only believe that Adam is glad I’m done reviewing the game so I’m not flooding his DMs with expletives any more. Outside of the story mode the game is good. There’s a lack of modes, with tournaments which can be undertaken against the computer or with friends, free play where you can adjust the rules, online play and a swing mode where you can use the Joy-con like a racket. The timing is really difficult to get right in swing mode, and to be honest its inclusion is a novelty really, the game is much better using a pad and buttons. In the rest of the modes though, the game is really good. It’s been a while since I’ve really felt I’m playing a proper tennis game, and this scratches that itch very well.

I’ve gone over how well the zone gauge can make the game feel more tactical, but the real magic in Mario Tennis Aces is when you turn off all those powers and you just play a proper game of tennis Mano a Mano. You do this by selecting ‘simple’ rules from free or online play, from that point on it’s 100% down to the tennis skills of the players and that’s the way it really should be. Breaking a racket can be a good feeling against an AI, but when playing a friend it’s terribly frustrating and not really fun for the person on the receiving end.

Play through the story mode until you take out the first boss and you should have a good grip on how the game is played, once there I suggest you stop before the game turns you into a gibbering gibbon of pure hatred. Take that part as a tutorial and then play against your friends and you’ll have a whale of a time. I put the game in front of my family members, and for the first time ever I saw interactions that wouldn’t look out of place in a Switch infomercial, they were having pure, unadulterated fun and that’s where this game’s magic lies.

Mario Tennis Aces will provide you and your friends with a really good time, provided you don’t spend too long in the story mode.

Mario Tennis Aces gets a demo on the Nintendo eShop