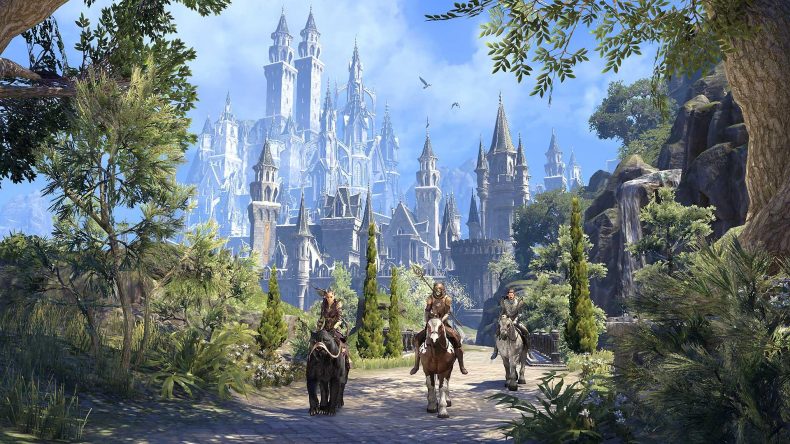 The Elder Scrolls Online is a second life, one to take you away to the realms of deep fantasy and wonder. Tamriel is rich in lore and legend, stories and adventure, and with every new expansion you’re thrust back into ZeniMax Online Studios’ wonderful world. If you were to Google TESO and find out what’s been released over the four years since it’s been a thing, you’d be overwhelmed by the amount of content that’s filtered in and may not feel comfortable joining so far into its lifespan, but with Summerset you’re given the opportunity to dip your toes into the gorgeous setting and find plenty of reasons to explore without worrying about getting confused or lost. It’s not a lot different to what you’ve seen before, but its still worth playing even though it’s no Elder Scrolls VI.

The story is one of the best parts of Summerset, and others a darkness not seen for a while. Queen Ayrenn of the High Elves has opened up the borders to The Summerset Isles, allowing anybody to venture in and see the sites of the majestic environment, but racism exists to such a strong extent that you sometimes feel uncomfortable walking amongst the High Elves. It’s a theme rather close to home with what is going on in the world, and the feeling of rejection by the High Elves you bump into is a constant source of unease. Whether you’re partaking in a quest or even mingling with town folk, there’s a lack of acceptance for outsiders, and as one yourself it’s always something you’ll encounter. You’ll take part in typical fetch quests, but there’re also some hefty objectives that bulk out the engaging story with the grandeur of your actions never feeling as big as they have done before. The scenery within Summerset can be a beautiful sight to behold, but it doesn’t seem that different from locations you’ve been to before. There are lush forests, cities awash with elven architecture, and water that glistens under the bright sun: it just seems familiar. That doesn’t mean it isn’t a pleasure walking around these environments, and the quests you undertake will take you to the far reaches of the Summerset Isles where there are some stunning detail in the smallest nooks and crannies.

In terms of how much you’ve dabbled with TESO before, creating a new character and starting from scratch is just as satisfying to those that have put hundreds of hours in already. It’s helpful to new players as it includes a new tutorial to show you the ropes, and also the structure follows the same one as existing players are used to. Bethesda has honed in on what makes TESO appealing, and does very little to deviate from the solid structure you’re used to.

Combat is almost identical to what has come before, and quests pop up like they normally do, but that’s not to say there aren’t new features. The focus of the story centres around the Psijic Order, and with that you’re given a new skill line that allows you to unlock some of the coolest abilities to exist in TESO. You’ll be able to slow down, even rewinding time to an extent, and more. This helps in battle when approached by multiple enemies. Whenever you’re faced with a group of attackers in previous games it can be tough to take them all out at once, but now you can freeze enemies to make it easier to defeat them. The main issue is to level up this skill line you have to travel all over the place to close portals, and it becomes more of a chore than an adventure. You can also now craft jewellery such as rings and amulets to boost your stats, but it takes time to research, and I’d much rather spend time crafting up armour like before. It feels as though the river is running dry for ideas of what crafting can offer and I wasn’t intrigued enough to spend more time crafting new and shiny things.

If you’re a fan of the MMO elements and prefer to play with others, there’s a new trial known as Cloudrest and it offers one hell of a challenge for those ready to put plenty of time into coordinating a full scale operation to take out the Sea Sload known as Z’Maja. The new abyssal geysers are multiplayer missions where you can team up with others, along with all the typical challenges like bosses and dungeons which, of course, still exist.

Summerset is much of the same, but it scratches the itch that Skyrim left behind, and even if it’s a long time until we see The Elder Scrolls VI, there’s plenty to do in this latest expansion – even if it’s not a huge step forward.

It's a great way to get involved in TESO, and even though there's not a lot of new stuff it's still worth giving it a go.