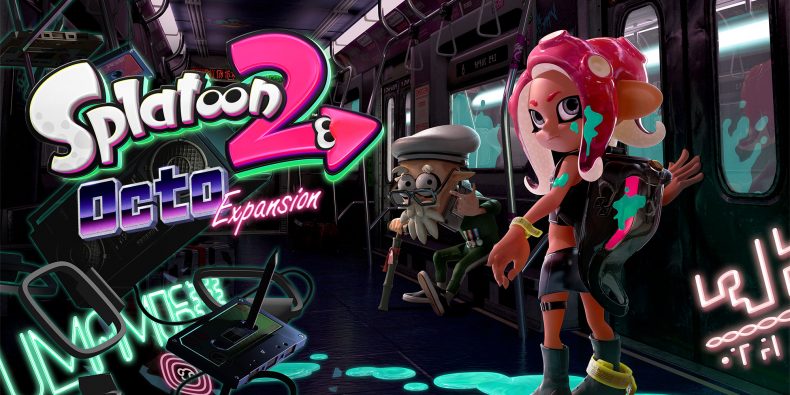 I like to wind my friends up by constantly stating that the 80s is the best era for music; it was a dodgy period for clothing and general aesthetics, but as far as music goes it was the bomb. Octo Expansion’s 80s stylings only really go as far as skin deep. There’s VHS fuzz, CRT interlacing lines, the font of the title and some Max Headroom style background shapes, but the fashion and music are completely grounded in Splatoon 2’s punk-rap style.

I guess in another way it does owe something to the 80s, this is a game that’s balls hard as hard as games from yesteryear were and it’s hard to tell if that’s a bad thing or not. I’ve just come off the back of reviewing Mario Tennis Aces and all things considered I could have done with something easier as a palate cleanser, but no such luck, this is a game designed to test even the best inkers. After a battle, Captain Cuttlefish and an Octoling find themselves trapped in the Deep Sea Metro subway system, and it soon becomes apparent why this is shut off from the denizens above ground. The system is run by Kamabo Corp, and hosted by the minuscule C.Q. Cumber. who run the system as a series of test chambers with successful people getting to go to the promised land; which is assumed to be Inkopolis. To clear the tests you have to find the four ‘Thangs’ at which point your wish is granted, or is it? There’s a twist here, and as good as the test chambers are when the twist occurs the game does ramp up in terms of enjoyment.

As I said before the main bulk of the game is a series of test chambers which you can take part in by paying CQ points. CQ points are earned by collecting the orange eggs as per usual in the Splatoon 2 single player mode, and are awarded for clearing a test. Ensuring you have enough points to clear, a challenge soon becomes your first thought whenever you lose all your lives and you start to wonder if you’ll get past the wall that stands before you, or if you should take the game up on it’s offer to help you by. You see, Nintendo obviously knows this game is tough and as a result offers you a way through if it’s proving too difficult. Once you’ve failed a level twice Marina can use the ‘test data’ to trick the system into thinking the test has been passed. To do this you need to pay the test fee again, so it’s up to you if you reckon you can do it with the amount of currency you have left or want to bypass it and try and come back to it later. It’s a decent system and ensures that those who don’t have the dexterity to complete some levels aren’t left behind.

The four ‘Thangs’ can be found on certain lines of the subway, new lines can be found by completing the square shaped nodes you find on the lines, not all lines contain thangs and not all the levels need to be completed to get the thangs so the expansion can last as long as you want it to. It really should be noted that once you have the four thangs you don’t need to enter the next phase, although, once you do you cannot go back to the subway until you have beaten the final boss, but you can go back afterwards should the desire take you. Some of the test areas are really hard, severe time constraints and stringent requirements like no weapons or an inability to even step in enemy ink can make certain tests more of a chore than others, while others like removing crates to match a shape offer a change of pace, while kinetic levels across rails popping targets are a real rush, but the difficulty is incredibly inconsistent and you can find yourself in incredibly difficult levels earlier than you feel ready for them. In fact, the overall difficulty here makes the final boss almost disappointing in how easy it is compared to the path to get there.

That said, the path there is sublime, away from the constraints of the subway system and currency the game ups the ante with each phase, growing in intensity of spectacle and music. Never let it be said that Splatoon 2’s designers don’t know what they’re doing because this is a real experience and it include’s a stealth segment where being spotted doesn’t automatically equal death despite having no method of defence. I guess aside from the inconsistent difficulty the only other disappointment of the Octo Expansion is that you have to complete it before you can use Octolings in the multiplayer, granted this can be completed in a few hours, but that’s of little comfort to people who want to use octolings right from the start. You can also unlock customisation items by collecting mem cakes from successful level completion (another penalty you suffer from using help to skip a level), but you only get access to those by finishing it all off, but if you binge (and you probably will) you’ll get it sooner rather than later.

As a companion to Splatoon 2, Octo Expansion excels; it’s aesthetically different while tying itself so well into the word fleshed out by the original game, Octolings outside of the oppressive Octarian regime are welcomed into the new world and this really is a deliverance of a promised land for people to ascend to. There’s a lot here and you can access it all as you want to. Splatoon 2 now has a new character look and whether that alone is enough to keep people playing online for the foreseeable future remains to be seen. But this is a great companion to Splatoon 2 and well worth the money, this is [slang not found] and you should grab it.

Octo Expansion does what it needs to by keeping Splatoon 2 fresh.