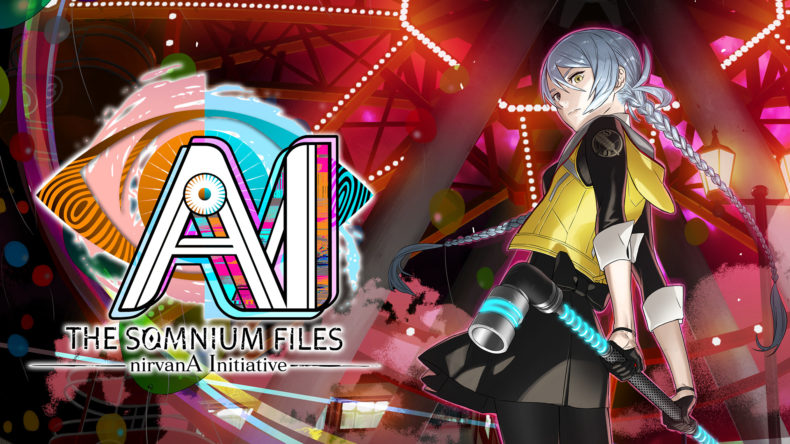 It’s rare for a video game to catch me off guard. With over three decades of playing all the weird and wonderful that the medium has to offer, I have played some wild games. Sometimes the weirdness is in the gameplay, be it the freeform rapping of Parappa or the blood sucking of Mr Moskeeto. Sometimes it’s the story that’s weird, like the adventures of Francis York Morgan or Phoenix Wright’s courtroom capers. AI: The Somnium Files – nirvanA Initiative falls mainly onto the weird story side, and man does this game go some places.

During a televised game show, a perfectly cut half of a body appears in the middle of the stage. Six years later, the other half of that body is found in an empty sporting arena with no sign of decomposition. Through the eyes of Agent Ryuki in the past and Agent Mizuki in the present, it’s up to you to uncover the mystery of the “Half Body Serial Killings”.

Figuring out how a body could be perfectly sliced (at a molecular level no less) and preserved for exactly six years isn’t a case for your average adventure game gumshoe, but fortunately our protagonists have a trick up their sleeve. Both of them have an AI-Ball to help them, which is an advanced artificial intelligence that lives in your eye.

With the power of your (slightly fan servicey) companion, you’ll be able to use all sorts to do all sorts of handy investigative tricks. These range from X-ray and thermal vision, to pulling up full and explorable virtual models of a crime scene. In true adventure game style you’ll need to piece together how the grizzly murder was committed, and show you understand the situation by recounting the order of events. You’ll spend a lot of your time in AI: The Somnium Files – nirvanA Initiative searching for clues and making deductions, but sometimes the real world clues aren’t enough. 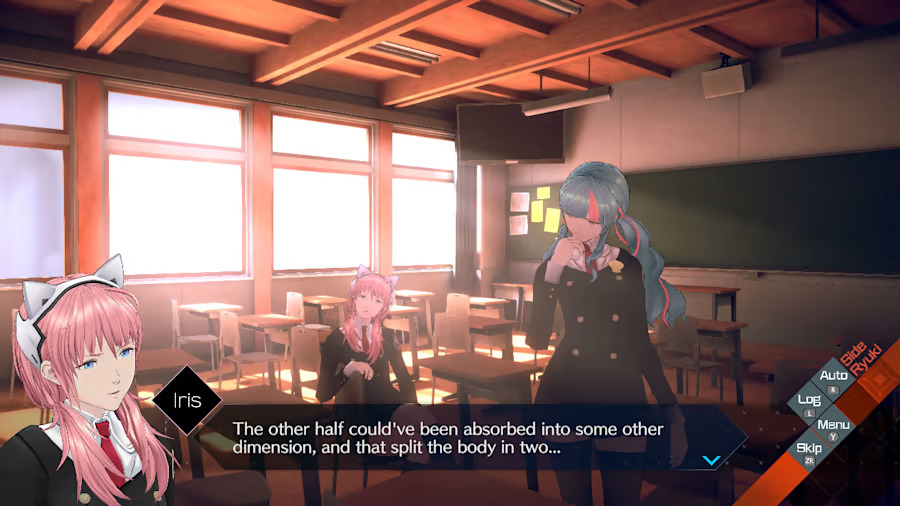 You see Ryuki and Mizuki are members of ABIS, the Advanced Brain Investigation Squad. These highly trained investigators are trusted with the technology to jump inside the mind of a witness or suspect, to help them find out more about the case. This is easier said than done though, because most minds don’t want to reveal their secrets.

When you enter the mind of a person of interest (or “Synch” with them) you’ll only have six minutes to discover the truth before you’re kicked out. Playing as your AI-Ball companion you’ll soon discover that everything you interact with in this brain world saps a set amount of your time, so you’ll need to choose what to do carefully if you want to find a lead.

Because of this bizarre combination of mechanics, each of these Synch missions functions as a sort of trial and error puzzle (which can admittedly get frustrating if you’re forced to replay them for running out of time). In a scientist’s mind you’re tasked with using DNA splicing to create the ultimate beings that have the genetic ability to overcome obstacles, whereas a teen girl’s brain makes you play an elaborate game of “Pokemon GO” with characters from the game replacing the pocket monsters. Every one of these missions is totally unique, and usually at least slightly baffling. 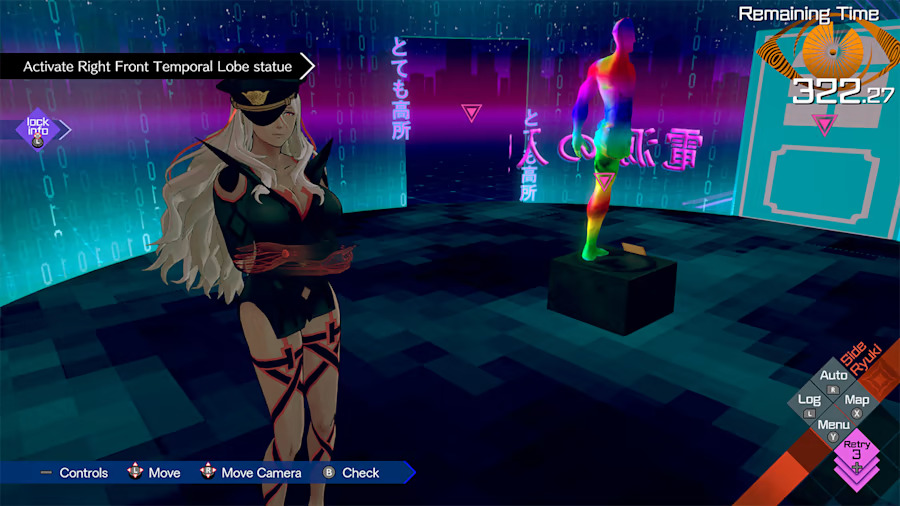 None of these weird situations would work if not for the incredible characters in AI: The Somnium Files – nirvanA Initiative. The charming cast are wonderfully voiced (in English) and are a very varied bunch. There’s a quiz show host with a cube shaped head that isn’t explained, a girl who bursts into full three minute long idol songs complete with enthusiastic dancing, and my personal favourite – a fortune teller who uses two crystal orbs to tell the future that she calls her “milky balls”. There’s truly never a dull moment in this game.

Because the game is set in two time periods, you’ll get to know the majority of characters in two different eras (and discover their relationships with two different protagonists). Finding out how your favourite characters have been living their life while you’ve been gone is just a lovely moment, and really makes the timeline flipping worthwhile.

The narrative of the game is truly fascinating, and I just didn’t want it to end. The biggest theme throughout the game is that of Simulation Hypothesis. If you aren’t familiar, this is a theory that the world we all live in is a simulation, which if you believe could obviously change how you behave in everyday life and is pretty heavy stuff. There’s also a very relatable theme of how overworking can lead to burnout and the effects of that, which is probably something more of us should probably think about. 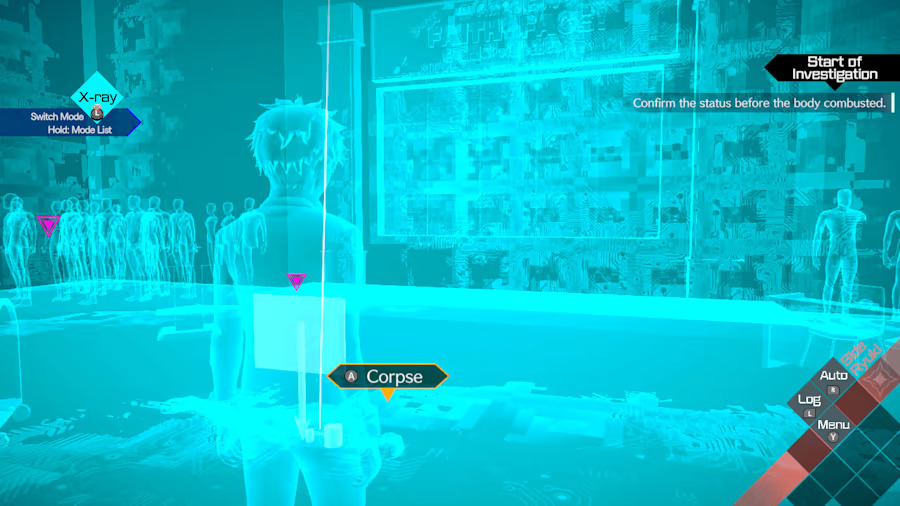 Even this far into the review, there are so many elements of AI: The Somnium Files – nirvanA Initiative I haven’t mentioned. There’s the Tamagotchi you carry around, that asks multiple choice questions every twenty minutes that grows into a different adult based on your answers. There are high octane quick time event action scenes that feature some pretty full on violence. There’s even a virtual world where you can ask your AI companion for life advice while also (sigh) dressing her up.

AI: The Somnium Files – nirvanA Initiative is a fantastic game, but it isn’t without faults. You examine objects in the background of stationary rooms you enter, but the descriptions are very lackluster. Clicking on a chair and being told “It’s a chair” just makes the game feel a bit soulless when you’re looking to learn something interesting about the world. Also the game has a few instances of slowdown in certain scenes, it’s not going to ruin the experience for you but it’s noticeable.

AI: The Somnium Files – nirvanA Initiative is a game unlike anything else I’ve ever played. The story is equal parts engaging and baffling, and the fantastic cast of characters will delight you every step of the way. If you can cope with a little bit of “fan service” and the occasional frustrating Synch mission that needs replaying, you’ll find one of the most fascinating narratives this wonderful medium has ever produced.

AI: The Somnium Files - nirvanA Initiative tells a fascinating story with some weird and wonderful characters and more than a few twists and turns.