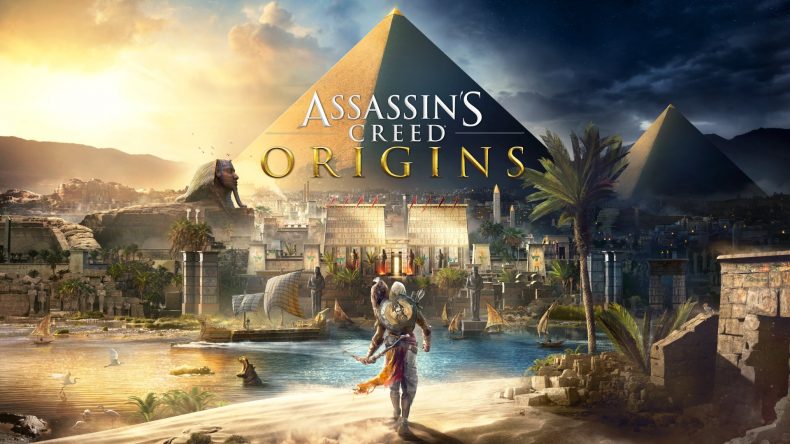 I didn’t know an awful lot about Assassin’s Creed: Origins before playing it as I wanted to experience the game fresher than I’ve ever done before. The AC franchise is one of my favourites out there, and knowing that this one was set in Egypt had me salivating for some pyramid climbing and tomb raiding. It may have quite a few visual glitches and the occasional texture pop, but this is the best Assassin’s Creed to date (and I adored Black Flag), with a much different approach than any of the previous entries. It’s such a well-realised world, and easily the sexiest of them all, offering glorious sun kissed deserts and glisterning rivers which you can travel across at your own pace. Seriously, this is one good looking game.

You play as Bayek, a Medjay and the first assassin, but at the start of Origins you’re not entirely sure who you are, as your life has lost all meaning since the death of your son. Set amidst an unfolding political drama and a dangerous threat known as the Order, you’ll soon find your place among it all. The story is engrossing and Bayek is an interesting character. The modern day sections are back, albeit much more interesting than ever before. Abstergo are here, and they mean business. Ubisoft’s Egypt is enormous, and the many cities that make it up are all very different, each one with its own geographical and political climate. There’s so much wildlife as well, making some staggering moments straight from Planet Earth a part of it: Hippos attacking crocodiles, flamingos and herons flying overhead, packs of hyenas and cheetahs prowling the deserts, and Lion’s roars filling the sky – it’s incredible (when you’re not being attacked by them). It’s fascinating just how much detail has gone into building this open world, but not unsurprising as Ubisoft are already known for great open worlds, seen in Watch Dogs 2, Ghost Recon: Wildlands, and Far Cry 3. The first big change in how you play is the combat. Gone are the days of waltzing into an outpost and enticing all of the ten guards over for a sword fight that ends as quickly as it’s begun, thanks to you hitting the correct parry prompts and bashing the relevant striking commands. It’s a huge wake-up call, but the combat here is as satisfying as it can be frustrating. You now have a light attack and a strong attack. The focus is much more on intense and intimate battles, where you’ll try and pick off one enemy instead of running in guns (or swords) blazing. I hate to say it, but think Dark Souls: it’s much more about dodging, picking your moment to strike, and doing so with efficiency courage. One of the first moments where it dawned on me just how different it was when I tried to infiltrate a garrison in the hopes of rescuing someone. I kept alerting the guards and got overwhelmed, finding it impossible to kill them all. That’s the thing, though, you don’t have to kill everyone, and for a lot of the times this is an option, you’d simply do better going in, rescuing your target, and getting the hell out of there.

It makes fighting much more strategic, and where you might have just gone in and kicked ass in previous entries, you’ll think twice about even looking the wrong way this time. That’s not to say you won’t fight. There’s a lot of fighting to be done, but you’ll plan ahead before trying anything too much out of your comfort zone. All enemies in Origins have a level of difficulty, so you’ll always come up against a challenge. As you attack them, you’ll see just how tough they are as their health is represented by a bar above their heads, and sometimes it can take a while to deplete it. As assassinations are still a massive part of the game, you’ll have to perform a fair few, but this time you won’t be able to press a button and they’re automatically sleeping with the fishes. If their level is too high, the assassination won’t work, and you’ll only part get the job done. It has changed the game for the better. Origins is an RPG in the way you get new gear, how the questing is structured, and how you level up Bayek. In terms of weapons, there are swords, staffs, heavy blunt maces, and huge axes to name a few, all doing different amounts of damage. They all have different rarity levels and can all be upgraded by spending coins. You can equip two at a time, with a simple tap of the D-pad allowing you to switch. You’ll also have access to different types of bows, such as the Predator bow (like a sniper rifle), and the Warrior bow (firing four arrows at a time). For protection you’ve got a shield, and this can be held throughout combat, but again, like Dark Souls, when attacking you’ll forfeit the protection for a second or two. There’s also the standard fire bombs, sleeping darts, and other nifty things to get the job done, giving you a varied arsenal to choose from when attacking. Mounts are another factor of Bayek’s set up, and throughout you’ll have access to camels and horses to ride around on, but they’re more aesthetic than anything else, much like the attire you choose to wear.

There are many ways to level up, with quests being the main source of XP, but there’s a lot to do in Egypt, so go and do it all. My favourite method has to be the chariot racing as it’s an incredibly intense spectacle, just like Ben Hur. They’ve clearly used the mechanics from Syndicate’s cart horses, just with a lot more control. You can participate in gladiatorial combat as well as locating papyrus scrolls, star constellations, and new areas, giving you so much to do – it’s unreal. All of the quests have a recommended level, so it’s a necessity to complete side quests, otherwise the main story is going to be ridiculously tough. This is where it falters a little. With the new combat, unless you aren’t a level or two below the recommended, you’re probably going to get slaughtered. As the game went on, I found it increasingly difficult. I’d spend two or three hours trying to get to the recommended level for the main quest, to then have to spend another couple of hours leveling up for the next one. It’s a massive game, and I’m very pleased there’s a lot to do, but I’d have liked to play the main quest with more of a steadier pace. This is where the RPG elements factor in, and due to the way it’s structured, this is kind of commonplace in games very similar, such as The Witcher 3: Wild Hunt. One of your most important features is your eagle, Senu. He scouts outposts for enemies and targets captains, finds certain loot, and more. Thanks to a robust skill tree, you can help to unlock added perks for him, as well as improving his perception by climbing tall buildings and synchronizing like every other Assassin’s Creed game preceding Origins. Whilst on the subject of skill trees, there’s plenty for you to use your ability points on, and lots of opportunities to get them. Certain tombs scattered across Egypt have ability points hidden away, and by exploring them you might just get lucky. If not, you’ll level up fairly swiftly so getting that elusive skill shouldn’t take you too much time.

The main quests in Origins are multi-layered, and feature a lot of different approaches for you to take, and the side quests are just as interesting. Instead of them being simple ‘fetch this, bring it back, and have some experience points’, they’ll feature characters that are just as interesting as some found in the main thread. One side quest started off with me rescuing a meek and mild fella’s items from a bunch of bandits, then on return, the man asked me to pop to his house and read some hieroglyphs on his wall. He then told me about some other villagers who had similar writings on their properties which then lead me to a pyramid where I found the answers to what it all meant. Speaking of pyramids, you’ll get to climb them and investigate, and they’re just as cool as you might think.

Assassin’s Creed: Origins thrusts you deep into a historical epic filled with so much beauty, intrigue, and excitement. It’s a shame there are so many bugs that persist throughout the game. I had body parts disappear, Senu fly through buildings and mountains, NPCs take flight randomly, and objectives in quests disappear (as well as quest difficulty levels change between playthroughs), such as cages housing slaves I was supposed to rescue suddenly spin around in a hurricane-type motion. They are noticeable, rather frequent, and the texture pops seemed to happen a fair amount. Unfortunately, I also had a couple of game crashes after exiting out of the game to the main menu too. Hopefully we’ll see these problems ironed out as the game releases. Regardless, this is the best entry in the series so far, and the new structure has worked wonders in keeping the franchise fresh. By the time the credits rolled, I was rather happy how they portrayed the beginning of the Brotherhood, and how the Assassins came to be. There are some cool moments regarding the logo and more, moments I won’t spoil for you from here. The many boss battles and assassinations preceding the final fight are all well thought out, however, it does drag towards the end. Thankfully, the cinematic conclusion does the game justice and I’m glad I stuck with it until the end. With sea battles back, the never ending evasion of the Phylakes (the Egyptian bounty hunters), journeys to familiar places, a huge world to explore, and so much more, Assassin’s Creed: Origins is one of the best games of the year.

Many bugs that cause problems
Drags towards the end

The series has managed to reinvent itself, all whilst still keeping the heart of the series intact. Bayek is a great character, and the open world of Egypt is remarkable.