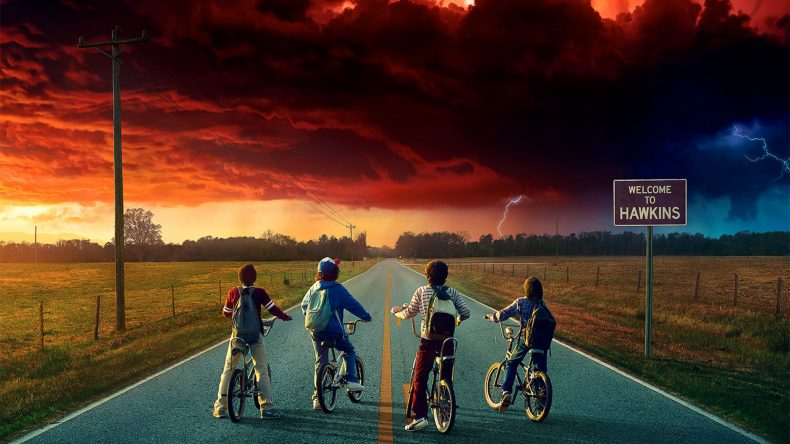 Bar a few missteps, the difficult second album for the Duffer Brothers is pretty much exactly what you’d want. It’s mad to think that just over a year ago, this sleepy fictional Indiana town came into our lives and made us all instant fans of the setting and the characters. Season 2 continues to deliver the 80s nostalgia, the character development; this time even with a bit of Egdar Wright-style direction, adding flair to an already incredibly stylish show.

There’s no let up in the 80s references, from the change in attitudes towards certain people (“Girls don’t play videogames!”), to the arcades, or even the fantastic recreated props like the Meow-mix boxes and old camcorders. Stranger Things tugs on your sleeve, reminding you of things you grew up with, though it’s perhaps fair to assume some of the subtler references will miss the mark with a younger audience. What won’t be lost, though, are the love triangles, the character development, the interesting story, and the fact that we get some answers to questions leftover from the first season.

As usual, Winona Ryder and David Harbour are on fire. Both portray their roles of Joyce Byers and Jim Hopper phenomenally well, but in fairness, all of the returning cast knock it out of the park. As for newcomers, Sean Astin as Bob Newby, Joyce’s new boyfriend, is an inspired piece of casting. Having shot to fame as Mikey from the Goonies in the 80s, it’s perhaps fitting that he seems so at home in a role set in the same period. He’s a lovable chap, always trying to do well, and he’s a genuine standout throughout the season. Paul Reiser is another who comes into the fold for season two and is equally outstanding. Set during the Halloween period, we’re a year on from the first season and Will is still suffering the side-effects we saw close out last year’s finale. To say much more would be unfair to you, but suffice to say that the Upside Down hasn’t gone away, and while the story is entrancing, it’s not breaking new ground – maybe we’ve seen it all before, but it’s the visual flair and acting that sets the show alight, and that’s no different here.

The nine episodes have no particular standout (though it opens and closes fantastically), but there’s a definite low point in the seventh episode. Given the way Netflix releases episodes (all at once, not over a weekly period), the idea of a cliffhanger is a tricky one to pull off. The school of thought has to be either that you make the show knowing people can binge it, or that you make it like a normal show assuming people will take their time. The cliffhanger from episode six, then, is completely left out, only for episode seven to be a completely self contained episode, before returning back to normalcy for episode eight.

This wouldn’t be an issue, normally, but the pace of the show also changes for this egregious episode. Where it feels as though time is passing at a linear pace throughout, it feels as though the writers wrote themselves into a corner and used this episode to get back out of it, getting back on track for the last few. The writing is strange here, too, introducing new characters that you’re not sure if you like or dislike, and much of what happens in this episode remains unresolved come season end.

In places, this season feels a little more grown up. Everyone is getting older, obviously, and while there’s nothing graphic language-wise, the kids appear to drop minor swears more regularly. The adults continue to be blissfully ignorant, and it reminded me of my childhood, as back then you genuinely could disappear for a day, only coming home when you were hungry. There are some strong people in Hawkins, and there are some beautiful moments in the dialogue. Hearing Winona Ryder’s Joyce told, “That’s what I like about you, you punch back”, at a time when equality was even worse than it is today is somehow moving, and there’s no doubt that she’s the strong woman we all hope our daughters might be.

There are nods to loss, and acceptance. That feeling when people get over things sooner than you. “How can people act like nothing has happened?”, you might say, while people are still hurting. There’s awkward youthful love, and lust. There’s a reminder, especially to parents, that nobody has a clue what’s going on in their own head at that age, and that all we can do is be patient and try to understand, guiding where we can.

Stranger Things resonates with so many because it feels so faithful to what these age groups felt like for us all. We may not have experienced demon-alien-whatevers from an upside down dark-universe attacking our sleepy town, but most people have been force to grow up suddenly by adult happenings, traumas that force you to age in a moment. Villains aren’t always villains, people aren’t always what you expect, but pure evil is always pure evil. The overall tone of the horror is much the same, although I wouldn’t call Stranger Things particularly scary, because it relies a little too heavily on jump scares – especially this season. Instead, the fear is in the unknown, the disgusting, dark world of the Upside Down. Eleven returns, obviously, but that’s about as much as you’re going to get from me on her: I won’t be spoiling it.

For those that remember it, Stranger Things season 2 continues to be a reminder of how far we have, or haven’t, come, and a throwback to a time long gone. Regardless, it’s a bloody good yarn and, despite one poor episode that goes a bit Suicide Squad, everyone can understand how hard it is being a kid. Exquisitely acted, and the epitome of “one more episode”.

The Witcher 3: Wild Hunt | How to unlock the Netflix Armour and Gear