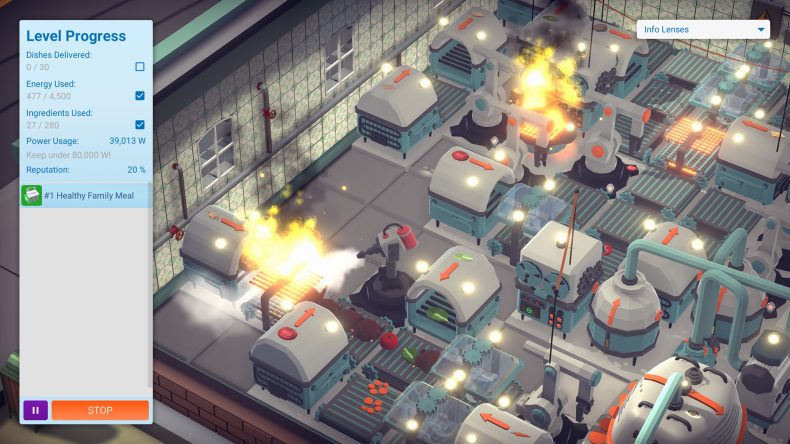 It’ll become apparent as this review progresses that I am a massive nerd. A slur that probably doesn’t sound as self-deprecating as intended, but that’s because I haven’t said why yet. I have a maths degree, nothing too surprising there, but my favourite part of it was studying simulation modelling. It’s the sort of logical computing that aims to identify optimum output by tweaking variables, like the best traffic light system for vehicle efficiency on roundabouts. Now, before you all fall asleep with boredom, ask yourself a question: what type of person not only brings up roundabout efficiency in a game review but also finds it enjoyable? Maybe, just maybe the type of person who gets a kick out of a game like Automachef.

Frankly, there’s no getting away from the facts here. Automachef is all about creating automated kitchen setups to carefully prepare and cook food to order in restaurants. It asks for a logical brain, a passion for efficiency, and only a passing care for the resulting unemployment your success brings for those people with catering experience. And, more-so than most genres, if that doesn’t sound appealing, chances are nothing I’m about to say is going to change that opinion. But if there’s even a slither of intrigue, then bear with me, because what’s on offer here is actually quite an addictive and well-thought-out little puzzler. So, you’re here to make automated kitchens and you do so by carefully placing everything from ingredient dispensers to conveyor belts to grills and fryers around your kitchen space to ensure the specific meals on the menu can be successfully crafted. The first challenge is one that’s purely procedural, in that you need to create an order of actions to make the end dish. A burger, for example, needs a meat patty to be dispensed and then cooked on a grill. It then needs assembling along with a burger bun into the finished article, and then must have a way out of the kitchen to be served to the public. As a concept, it’s fairly intuitive and means most who try it will immediately understand what’s required.

More complexity arises with more complicated meals to prepare and having to juggle additional confines of limited kitchen space, as well as power and financial constraints. This is where the game transforms from simply being a cooking simulator to a more logical puzzler as you aim to balance multiple options and variables for the optimum set up. Thankfully Automachef has two modes that do an excellent job of setting a decent learning curve for you. The first is Campaign mode, with over 40 different scenarios to tackle. Whilst most task you with delivering a set amount of meals within budget, ingredient and power constraints, there are also tutorials peppered throughout to introduce new concepts and challenges that will arrive in future campaigns, meaning you never feel overwhelmed, and your knowledge and understanding grow as you play. The second mode is Contract mode, which sees you take what you’ve learnt in Campaign Mode and use it to start up your own kitchen creation business. You’ll receive contracts from clients who need a kitchen designing and if you meet their specifications, they’ll buy it from you and you use the profits to fulfil bigger contracts. You can also buy more sophisticated machinery to add to your arsenal, allowing you to tackle more complex problems and situations. I found the best way to play was to get at least a decent way through Campaign mode before tackling Contracts, purely so you have the lay of the land, and don’t end up leaving yourself short of cash, but they are separate entities and can technically be done in either order. What I really enjoyed, apart from the gentle learning curve, was that both modes give you the option to experiment with new machinery before you really need to use it. It means the more inquisitive amongst you can experiment with more control and flexibility in your kitchens, whereas others can go at the pace the game intends. There are also modes where you can create your own kitchen scenarios and share them with the community. After launch I imagine this to be where there will be added longevity for fans on top of the wealth of pre-made content.

Perhaps the biggest criticism of Automachef lies in its repetition. Whichever mode you choose will always see taking a rectangular gridded empty kitchen and filling it with food assembly lines. You’ll always be checking how to make the food on each menu, and then tweaking it to make it as efficient as possible. It would be better if there were more variety in the challenges such as non-rectangular kitchen spaces or machines having to be in fixed positions and needing to be built around to make kitchens work. Also, the lack of customer interaction apart from the glimpses you catch of them outside the restaurant before they enter makes the process feel very transactional. And that’s fine for those not concerned with people, but those looking for a restaurant simulator will find Automachef lacking. The only interaction comes from the robot supervisor who helps you in Campaign mode, as their observations of the differences between humans and robots is the only humour to be found, though the lines become a bit predictable and often fall a little flat. Despite these concerns, there’s a simple truth to Automachef and that is that it’s incredibly addictive. Finding a setup of machines that works efficiently is incredibly satisfying, and watching it come to life and deliver orders whilst you sit back in awe of your creation in motion is a great feeling. Nailing each win condition for either a campaign or contract becomes compulsive as you want your constructed kitchen to be the best it can be. You’ll be tweaking power settings, timings, controlling when machines whirr to life to try and perfect the output for each challenge. And you’ll do so with a sense of understanding and confidence thanks to the way any new mechanics are introduced in a logical and concise way. I’ll admit with only a hint of shame that there was one evening where I stayed up far later than intended, perfecting my latest setup. The pursuit of achieving all win conditions was so addictive, it meant a shocked look at the clock after I’d stopped playing in disbelief at how much time had passed.

Automachef places itself firmly in niche puzzler territory, one that prioritises logic and efficiency above all else. Its specific setting allows it to create a very focused set of tools and options for you to manipulate to succeed, and the way it drip-feeds you new options manages to expand the experience in an intuitive and accessible way. Conversely, the lack of variety and indeed personality for the most part, will put off some people. But if you’re the type of person who likes creating, crafting and building, someone who likes logical puzzles and the ability to tweak different options to amend the outcome, then Automachef is for you. A warped passion for roundabout traffic lights is not required.

Repetition will put some people off
Lacks charm and personality

Automachef is a well-executed but niche puzzler. If you enjoy logic puzzles, and building and creating things, then there's a lot to like here.