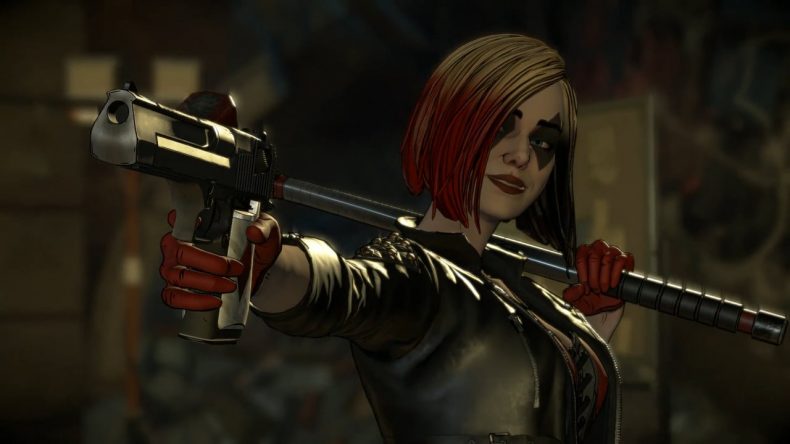 If things weren’t tough enough for Brucie, Catwoman has to wander right back into his life and cause the billionaire bat a million more problems, because as if infiltrating one of the scariest band of villains isn’t tough enough, right? Yep, possibly the only woman Bruce Wayne has ever loved is back for her own reasons, and it stirs up a lot of old feelings. Fractured Mask adds more layers to Bruce’s betrayal, and gives us more stress to deal with as his involvement goes deeper and deeper; not only that, but the Pact are starting to suggest a rat is within their ranks, after their leader, Harley Quinn starts to question how everything went down at the end of the last episode.

I really enjoyed this episode, right from the tense beginning to the troublesome end. So far, Telltale has made Batman original, all whilst still keeping within the mythos of the character. Villains like Bane, Mr Freeze, and Harley Quinn exist, but certain things have been twisted and they’re not the same as you’ve seen them before. Plenty of the characters have had certain revelations, or are represented differently in the first two episodes, and this one is no different. There are some great scenes with John, who is slowly becoming my favourite character. You’re constantly waiting for him to finally snap, or be pushed to the edge, signalling his descent into madness, but he’s such a nice guy (as far as villains go) that you don’t wish that upon him.

Harley Quinn is excellent in this game, being the dominant villain, and there are nods to her past that fans will appreciate. John’s relationship with her also advances a bit, and the her hold on him is strained due to the pressure she’s putting on him. It’s a great dynamic that grows with every scene, and I can’t wait to watch it completely derail (fingers crossed). Elsewhere, Bane and Mr Freeze are being the standard villains they’ve been all the way through, rarely exciting or remaining interesting to watch, but a necessary evil to support the wonderful Harley. Bruce Wayne is really struggling to keep up with the charade of being a bad guy, as it begins to take its toll. I found myself reacting to certain situations without hesitation or mercy, which is not something Bruce would ever do, however, it felt the right thing to do so that nobody would expect him to be the mole. Selina Kyle’s arrival changes everything, and the way in which Bruce leads many situations with his heart ends up making choices difficult to make. Batman and Catwoman have always had a turbulent relationship, but at heart they are very much in love. In Fractured Mask, Telltale explore this avenue, but change some of the outcomes to give the story some worrisome moments.

For many of the episodes so far, combat has been done very well, and episode three is no different. One of the fights is fast-paced, requiring you to be assertive and responsive or else you’ll suffer a loss. It also went on for some time, so you have to be alert and savvy with the controls. There’s also a really cool puzzle that brings back a character you thought was long gone, but we’ll it at that so as not to spoil the surprise.

Fractured Mask is another hit, and the growth of Bruce Wayne’s character is excellent. For those who’ve stuck by the series right up until now, you’re being rewarded. This is already a much better story from last season, and the characters all work well together, even the duller ones. It also looks as though things are going to get much better after the unveiling of another kind of threat, and a partnership that could see the season go out with a bang. I definitely think Telltale’s take on Batman is one of the best yet, rivaling the great Tim Burton. Bring on Episode Four!

Harley and John are excellent
Bruce's growth as a character has been built really well
Interesting twists
Catwoman!

Bane and Mr Freeze are a bit dull

I enjoyed episode three quite a lot, and I'm really looking forward to see how the big reveals are going to effect the rest of the season.