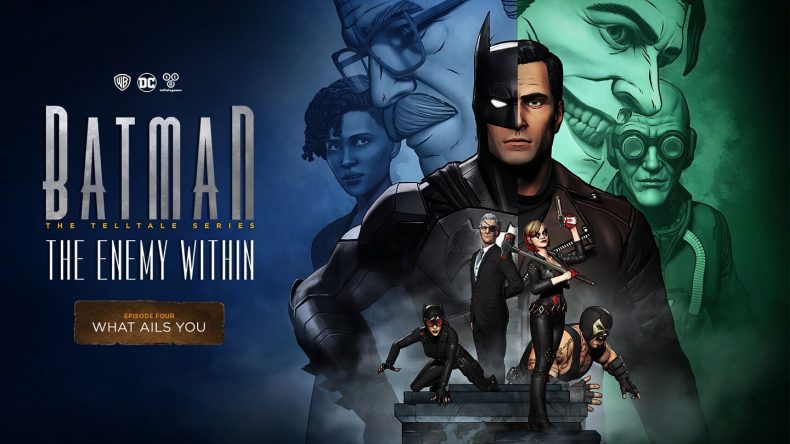 This season of Telltale’s Batman has been a joyous accomplishment of messing with a trusted formula and turning it on it’s head in all the right ways. John Doe and Harley’s relationship is a trainwreck, but it is the soon-to-be clown prince of crime who is the submissive, the insecure – the puddin’. While Batman has been a complex and troubled individual this season, it is their relationship that’s made the biggest impact. Throw in one of the best selections of supporting heroes and villains, and you’ve got one hell of a story.

In “What Ails You”, we finally get to see the final push into madness for John, new heroes being born, and old foes showing a side we’ve never really questioned. We see what’s really going through their heads and understand something we may not have ever thought of: what if these villains don’t actually enjoy embracing their madness, and their afflictions? Mr Freeze shines more so than he has done so far, with a great chat between himself and the bat.

The intentions of Waller and her cronies take more of a front seat, and the Agency end up showing off their darker side. It’s great how Telltale has shaken up the two side of good and bad, and I was questioning both throughout. Amanda Waller has always tried to bend the rules to get what she wants, but when her true intentions are revealed, everything gets thrown into the air once more. Another story thread that reached deep into the soul was between Bruce Wayne and Alfred.  We all know that Alfred has been there for Bruce through thick and thin, but all of his loyalty and help to his illegitimate son takes its toll in a moving and unfortunate way. The writing, and the decisions you get to choose from give their interactions emotional weight, and it isn’t until late into the episode you start to question your actions and their affect on your trusty butler. You kind of feel bad, and it’s something I’ve never really felt before – at least, not whilst playing Telltale’s Batman.

The best thing about this episode, however, is John Doe. Yes, it’s pretty obvious he’s going to end up becoming The Joker, but up until What Ails You, he hasn’t actually embraced the darkness. There have been many moments in both seasons where you’ve felt sorry for him, and even to the point where you’d call John a friend. Unfortunately, the toll of Harley’s treatment of him, and your potential choices to show distrust or frustration towards him don’t help at all, especially when you reach the amusement part section of the episode. It is easily the best scene since Telltale took on Bruce’s story, and when you start to see the fragments of his mind pop up within the funhouse do you realise just how far gone the once fragile and sweet John Doe has changed. There are so many characters in this episode, but never does it feel overpopulated by them all, and each one – from Catwoman to Bane – serves a purpose. Batman and Catwoman have always had an interesting relationship, and once again, we’re treated to more of its progression. Tiffany’s brief appearance in the episode also plays a significant role, and it finally confirms some cool acknowledgement to her comic book roots. There’s an awesome fight early on, and the finale also knocks your socks off – both featuring a wealth of characters, and both being some of the biggest set pieces Telltale has ever pulled off.

It feels as though Telltale are getting everything right. It may have taken a season, but this is the best the series has been and leading into the finale, we’re in for a treat, especially if you picked the route that I did. Sheesh!! I really hope the finale is a welcome end to The Enemy Within, and I truly hope Telltale aren’t done with Batman by the time the season is through. Bring on episode five.

What Ails you is a superb fourth episode, and gives us plenty of great set pieces and character progression as the series reaches its climax