Bubsy: The Woolies Strike Back Review 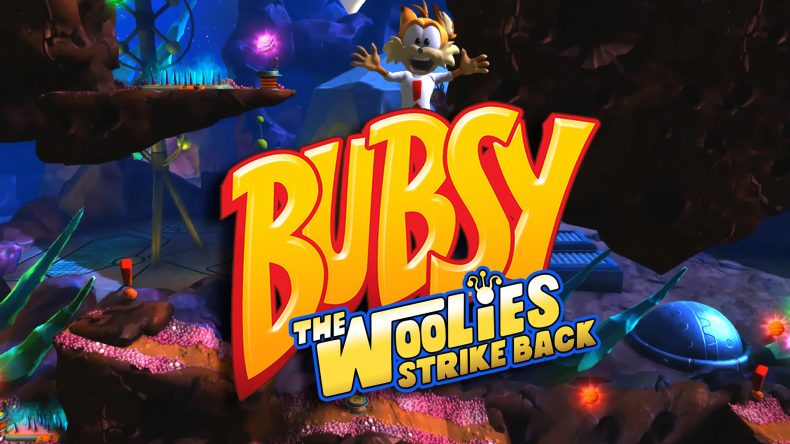 Let’s face it, nobody expected Bubsy the Bobcat to resurface in 2017. I’m not entirely sure who, if anyone, actually asked for this resurrection, but here we are. Bubsy had seemingly retired, happy with his Golden Fleece (a ball of golden yarn, because cats like that yarn, obviously) at home, until his old nemeses the Woolies crash through his wall and steal his most prized possession. That’s where our tale begins.

The intro, along with the other cinematics in the game, is made up of admittedly paradoxical animated stills; 2D paintings, not unlike animated comic panels. This leads directly onto the world map, made up of a mountain region, desert region and one surprise region. The Woolies’ UFO flies around the map, like the Bowser ships in older Mario titles, revealing levels and stopping on a boss tile of sorts. Simply move Bubsy around the map via the level tiles, unlocking each tile as you progress. Entering a level essentially teleports you back in time, back to Bubsy’s side-scrolling days, although this time everything is rendered in 3D. Weirdly, Bubsy has one of the weakest character models in the game, but everything else looks colourful and detailed, with a similar look to the moving paintings of the intro movie. It’s a nice visual style that works well in a platformer like this, but that just makes the rest of the game’s cracks even more obvious.

The actual platforming is okay, but Bubsy’s inertia is awkward and his hitbox is pretty unforgiving, thanks to some animation flaws. In one boss fight, I died because I tried changing direction while almost standing still, only for Bubsy to do his ‘skidding on the spot’ routine which caused him to flail wildly, hitting the spikes at the edge of the screen. His pounce move is also far too inaccurate, often flinging him over the top of enemies and sometimes off the edge of a blind jump. Speaking of enemies, they really are a boring bunch. Their design is nice enough, looking a bit like alien ants as they strut and fly around the levels, but they have zero AI. The strutting ones literally move back and forth along designated paths, not even reacting to Bubsy’s presence except for dying if he jumps on their heads or hits them with a wildly inaccurate pounce. The flying ones are much the same, except they fly in designated patterns; all except for the bees, which will chase Bubsy unless he passes a giant flower, pacifying them and leaving them sitting happily on their petals. The whole thing feels a bit dated, quite frankly.

The bosses aren’t exactly varied in their design either, being as they’re all UFOs of some description, but they do present some fairly varied challenges. They change up their patterns to keep you on your toes, although this can lead to some pretty brutal battles. If you lose a life however, you’ll jump back in with the boss’ life bar already down to whatever level you left it, which I’m guessing was to help combat some of the frustration that can occur. Lose all your nine lives however, and you’ll have to start the fight again from scratch. Just be prepared for some difficulty spikes, even as early as the second boss battle. That one took most of my lives, thanks to some rather unfair attacks that formed its randomised repertoire. I’m painting a pretty bleak picture of Bubsy: The Woolies Strike Back, but the truth is that it’s quite playable. It’s no more than an average platformer though, with you jumping around collecting yarn balls and keys throughout each of the game’s thirteen levels. Collect five keys to unlock the level’s vault, allowing you to collect the mountain of yarn contained within, in turn giving you the chance to collect every yarn ball in the stage. This is where replayability comes in; each stage has a checklist of collecting all the yarn, opening the vault and completing the stage without dying. It might sound easy enough, but those keys are hidden well and some of the levels can be quite tricky to navigate.

That replay value is all down to the individual player attitude though, and let me tell you now; you can reach the end of this game in under an hour on your first playthrough. This can be stretched to three or four, with patient collectible gathering, but no matter how you look at it, it’s simply not enough. A few level challenges cannot excuse such brevity, especially not for a game that’ll cost you over £20. It’s not a price that invites curiosity or an impulse purchase, which is all Bubsy can hope for, these days. Frankly, he should have been left to his retirement, repeating his tired one-liners to himself, instead of subjecting us to them.

Nice and colourful
Plenty of collectibles for replayability

In a game that can be finished in under an hour, Bubsy doesn’t so much as strike back, but rather say a few harsh words before getting pummeled into the ground.