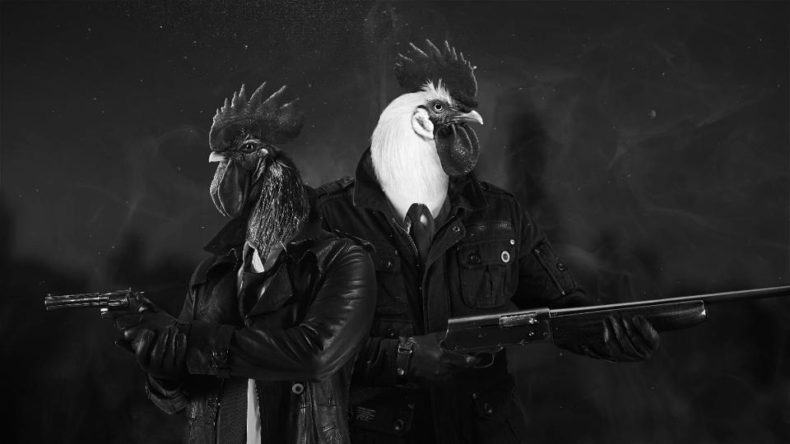 You’d be hard-pressed to find another game released this year that is quite as visually uncomfortable as Chicken Police – Paint if Red! is. Actually, that isn’t fair, it is actually dripping in style, with a strong 30s noire feel to it, complete with film grain giving everything a gritty tone. It’s more the characters that induce discomfort. They’re all broad noire archetypes: a washed-up detective, a crime boss, a femme fatale, but they are also anthropomorphic animals. No, that isn’t right, they are animal heads beautifully rendered in photographic detail meshed onto human bodies. It is extremely disconcerting finding yourself attracted to a seductive cat with emerald green eyes and a rugged chicken in a long leather trench coat.

You play as Santino “Sonny” Featherland, a down and out cop on furlough from the Clawville PD. One half of the famous “Chicken Police” he’s 121 days from retirement, washed up, and living in a hotel room. There’s a hint of a painful back-story about his wife and daughter, cheap bourbon is his mistress and his ex partner of ten years shot and nearly killed him. To make matters worse there’s a pretty Impala in his room. How did she get there, and what does she want?

It turns out she is there on behalf of her mistress Natasha Catzenko, the dangerously beautiful owner of the Czar club, and current girlfriend of mob boss Ibn Wessler. Catzenko has been receiving threats that have her terrified for her life, and through a shared connection with Sonny’s ex-wife, Molly, she is asking for his help. He has no choice and together with his ex-partner, Martin “Marty” MacChicken they scour the streets of Clawville to uncover the dark mysteries of Catzenko’s past, why she is being threatened, and by whom. 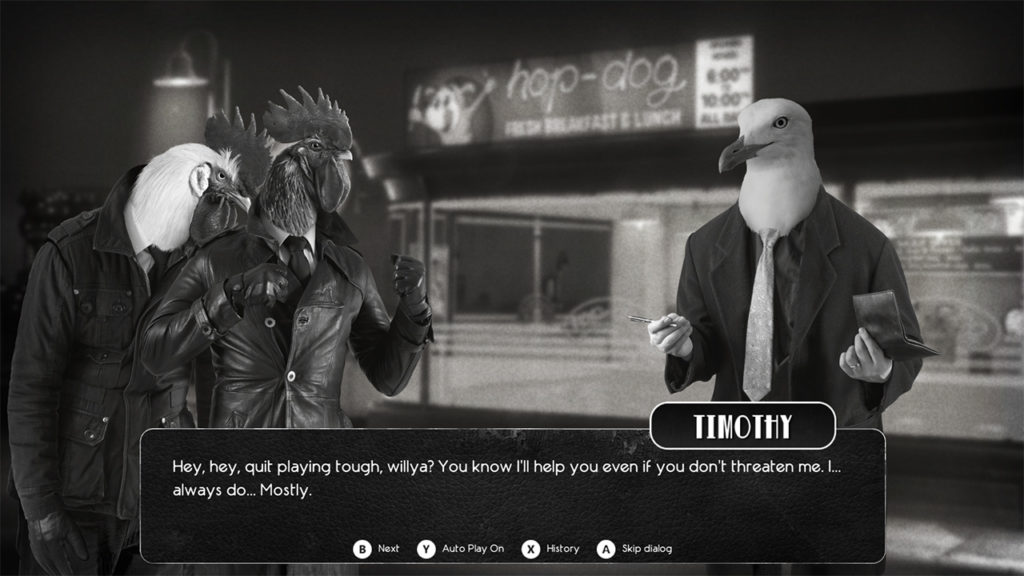 Chicken Police – Paint it Red! is a noire style point and click visual novel. Superb voice acting lends vitality and realness to the bizarre character stylings. I never quite got used to the weird fusion of animal heads atop human bodies, but each character you meet is so fleshed out that it is a consistent joy interacting with them. You can keep track of the characters you meet within your notebook, along with observations and clues about the mystery you are trying to solve. There’s also quite a bit of world-building available through the various codex entries within your notebook. Clawville is a dark place with some dark politics at play. You’ll read about predation, the meat wars, and the social structure that makes up the world. Not all animals are created equally in this world, and there’s some abject cruelty at work, particularly for some species, and you’ll crawl through most of it on your quest to solve the mystery.

You’ll move around various locations of Clawville looking for clues as to why Natasha is being targeted. You’ll get the opportunity to click around spaces looking for leads, solve some light puzzles and talk to the various characters you meet. Some characters inevitably become suspects, and at this point you get the opportunity to question them in a more formal sense. Questioning has a hint of LA Noire about it, but without the reliance on facial animations, nor the wild behavioural swings of Cole Phelps to contend with. Instead, you’ll get some hints about a character; they might be secretive or protective, perhaps they are easily flattered and therefore a bit easier to manipulate into giving you the answers you are looking for. Questioning is a multiple-choice option with a number of choices that you’ll have to decide which one most accurately reflect what you know about the character you are questioning. Once completed you will get an accuracy score and some further leads in the case to follow. 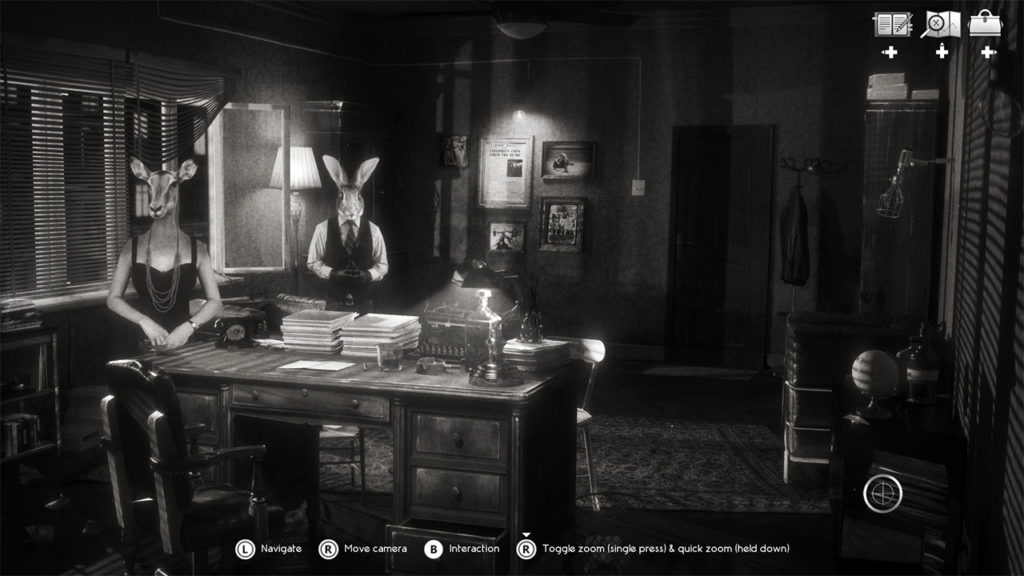 It is pretty compelling stuff, but not without its issues. Characters are fully voiced, but their words are also delivered via text that slowly fades into view. For a quick reader such as myself, it is simply too slow. Unfortunately, there is no way to speed it up, instead clicking the skip option will entirely miss the dialogue out. There is something to be said about perhaps slowing things down and soaking in the character voices, but that isn’t how I play and missing dialogue in a detective game is a big issue when little clues and titbits of information can easily be missed. There is also no way of replaying the missed dialogue as that option only replays the current piece. Similarly, dialogue can be missed in the simple way you interact with characters. As a point and click game, you hover the cursor over the character and then utilise a radial menu to choose what you want to do: look at them, talk to them, question them, or interrogate in the case of a suspect. Hovering too long on a particular option will automatically start the process and if you click select at the same time you end up missing the first line of dialogue. It has the effect of some events feeling disconnected from what your current understanding of things is.

Another issue I had was in the puzzle solving. An early puzzle has you searching a fireplace to find a hidden safe. The solution of which I already had in my possession, however in-game it was extremely difficult for me to make out the images required to solve it. The only way I could was to quit out of the game and then go into the “Extras” menu and look at the collectibles I had unlocked. It may well have been the case that I had missed some vital textual information from inadvertently skipping dialogue, but the fact the solution was only really easily visible outside of the game is a huge misstep, why these things couldn’t be contained within the codex or another section of my notebook I don’t know.

Chicken Police – Paint it Red! is a lot of fun though. It is dark and funny with an atmospheric and clever main plotline. The central mystery keeps pulling you through and the actions you take in-game feel for the most part streamlined and in keeping with the themes. There’s some weird tangential gameplay – a shoot-out during a car chase, and a mini-game that involves zipping up the dress of a high-class escort that mix things up a bit, but much of your time will be spent clicking around and absorbing the gorgeously rendered environments. It’s a clucking good time.

Chicken Police is a noire style point and click visual novel. It features a dark and compelling central mystery and a superbly voice-acted cast of bizarre characters. It is a clucking good time!