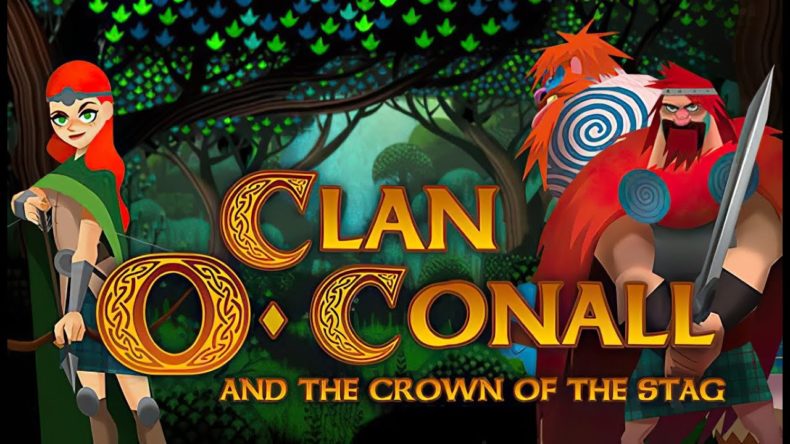 and There are no shortage of games with an anime art style, that’s for sure. But it’s much rarer to play something with an art style inspired by Saturday morning cartoons. Whether you were raised on a diet of Hey Arnold! or Dexter’s Laboratory, chances are a decent chunk of your childhood (or adulthood, no judgement) was spent watching Cartoon Network or Diggit. Clan O’Conall and the Crown of the Stag embraces this fantastic aesthetic, with a tale of family and Celtic folklore.

Chief Arden and the legendary Crown of the Stag have been stolen by The Mother of Demons. It has fallen upon the three inheritors of Clan O’Conall to save the day and prevent the land from descending into chaos. And so begins an epic journey through forests, crypts and ruins, with plenty of demon-killing and puzzle solving along the way.

Clan O’Conall and the Crown of the Stag: A colourful action-puzzler

Each of the three protagonists of Clan O’Conall have a unique set of skills. They can be instantly swapped between with the push of a shoulder button al a Trine. Kilcannon is a mighty swordmaster, Clakshot is nimble huntress with a bow, and Haggish the Brute lets his fists do the talking. Different enemies will be easier to deal with as different O’Conalls. You’ll need to use them all to overcome the platforming puzzles blocking your progress. 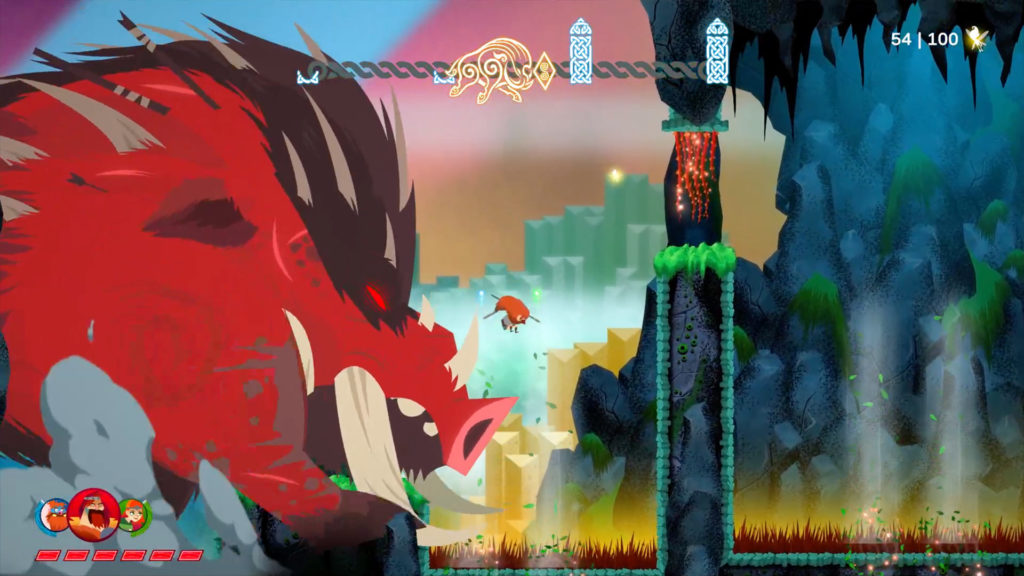 The basic abilities of our heroes are simple enough to grasp. Switching to Haggish to smash a floor or Kilcannon to cut through vines. Before you know it though, you’ll be firing arrows to activate fans, throwing objects onto switches, and gliding over obstacles with Kilcannon’s cape. It’s satisfying to use all your abilities and teammates to make it through a tricky puzzle room.

You’ll need to switch between characters just as much when the enemies come along too. Without Clakshot’s arrows aerial foes are a real pain, and you’ll struggle to damage a shielded enemy if you don’t use Haggish to smash its shield with his pure strength. Each character has their own health bar though. So if you’re really in a pinch you might want to use a less optimal character to slay a troll. If any one of your team dies it’s game over, but this means you’ll never get stuck without their skills. 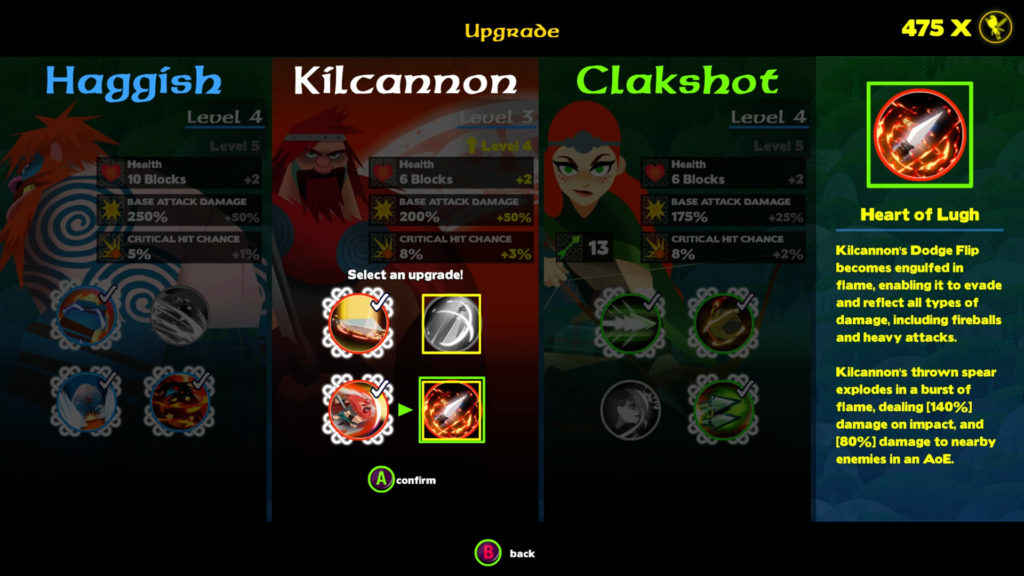 You level up your characters between levels by collecting Faeries. Whoever you choose to invest your faeries in will get extra health and attack power, as well as a new skill. I really appreciated getting to buff my favourite characters. Plus the skills you unlock are really impactful. For instance giving Clakshot’s arrows piercing or adding extra hits to Kilcannon’s attack combo.

You’ll need all the additional power you can get when faced with the huge bosses of Clan O’Conall. These mighty foes will test all your skills, with screen filling attacks you’ll need to learn to dodge to survive. Every one of these big baddies is an absolute joy to fight, and I loved using every last hit point to finally overcome them.

As you progress through your adventure, you’ll consistently have new obstacles thrown your way. There are magical chains that prevent you from switching characters. There’s chase sequences where you’ll die if you dawdle. And there’s even stealth sections, which thankfully only deal 1 damage if you’re spotted. I don’t think all these ideas hit perfectly, particularly the stealth, but there’s no chance you’ll get bored of the same old mechanics. 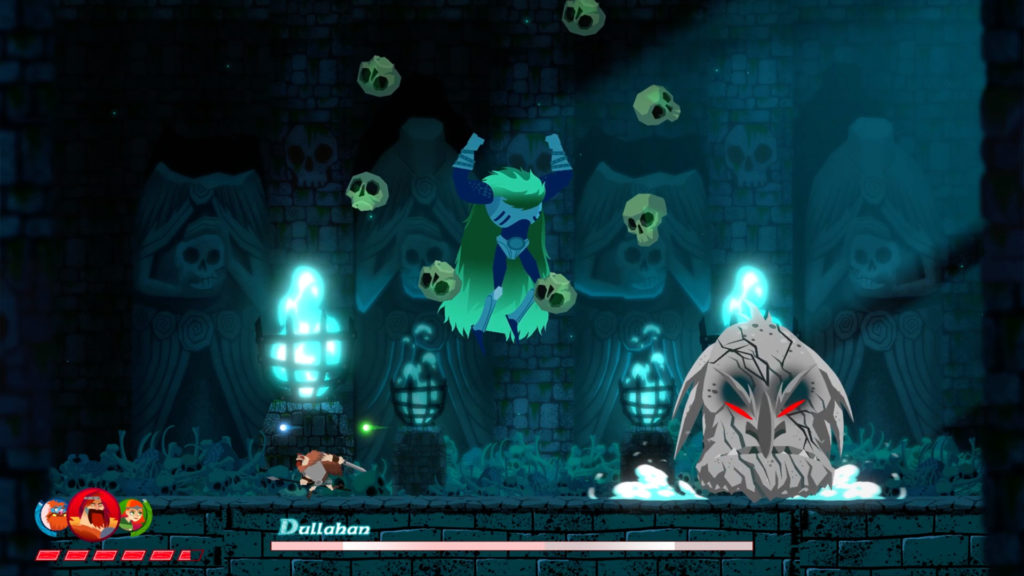 If you’re a completionist, each level keeps track of every collectible faerie, enemy killed, and creepy imp with a swag bag located. It’ll take some serious effort if you want to gather everything, and especially if you want to grab those well-hidden imps.

Clan O’Conall and the Crown of the Stag: A gorgeous adventure

I can’t understate how great Clan O’Conall looks. It’s such an underused aesthetic, and oddly suits the Celtic theme. The music is good too, with the catchy title theme permanently stuck in my head currently.

Clan O’Conall and the Crown of the Stag is a great action platformer. It has a perfect balance of combat and platforming puzzles. Switching between the 3 characters is a great gimmick, and it’s implemented beautifully. If you’re looking something to keep you busy on a Saturday morning, you could do much worse than this gorgeous adventure.

Not every new idea hits

Clan O'Conall is a gorgeous character switching adventure, with a perfect balance between puzzles and combat.