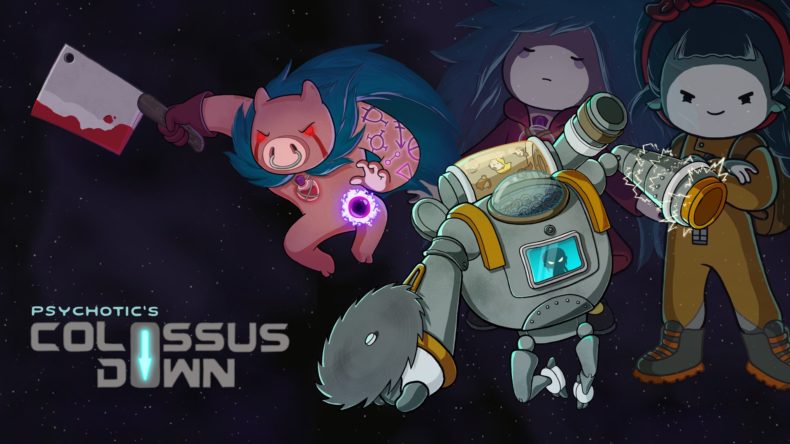 A couple of years ago I picked up a cute looking adventure game called Mechanika. I wanted something easy going to play, and thought a humorous little point and click would do the job. What followed was one of the most entertaining (and intensely dark) games I’d played for some time, about a 7-year old alcoholic who wants to destroy all the people who’ve wronged her by building a mech. Colosus Down is a direct sequel to Mechanika, but this time Mango Protocol have gone in a completely different direction for some Beat-em-up action.

The game begins where the previous one ended, with Nika finishing the construction of her homemade mech suit and getting ready to destroy everything uncool. Now finally armed with all the power needed to level her enemies, the tiny terror blasts off leaving her house and family in pieces as she goes on her murderous quest. 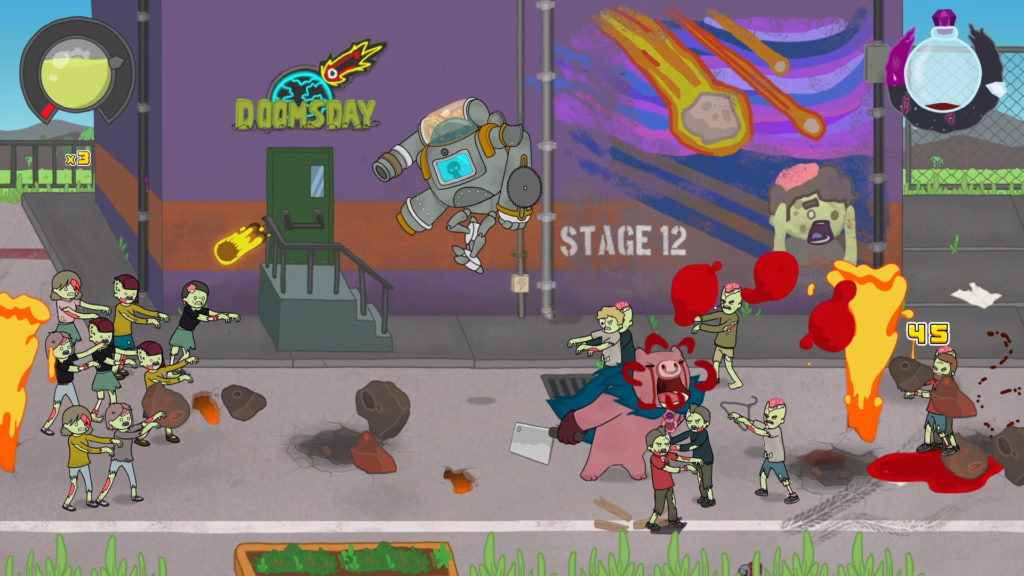 The absolute highlight of Colossus Down is the story, which is equal parts humorous and horrific. In the first stage alone you’ll turn your headmaster and classmates into red paste as part of your mission to destroy everything uncool, and although I felt slightly uneasy about this unprovoked murder, Nika had no such hesitation. I was surprised by how many call backs there were to the previous point-and-click game, and new fans would definitely miss out on a lot of references.

Unfortunately the beat-em-up gameplay just doesn’t hold up to the story. If you’ve played a Streets of Rage or Golden Axe game before, you know what to expect here. Enemies pour in from both sides of the stage, and it’s up to you to punch, shoot or zap them out of existence. Enemies further away are probably worth shooting flaming doll’s heads at (another reference), or if you want to stun a tougher foe you might want to send an arc of electricity its way.

The main issue with fighting enemies is the lack of feedback when pounding away at a foe. There’s no feeling of impact when you start wailing on a security guard, and how much damage it takes to finish off even a basic baddie doesn’t really help matters. 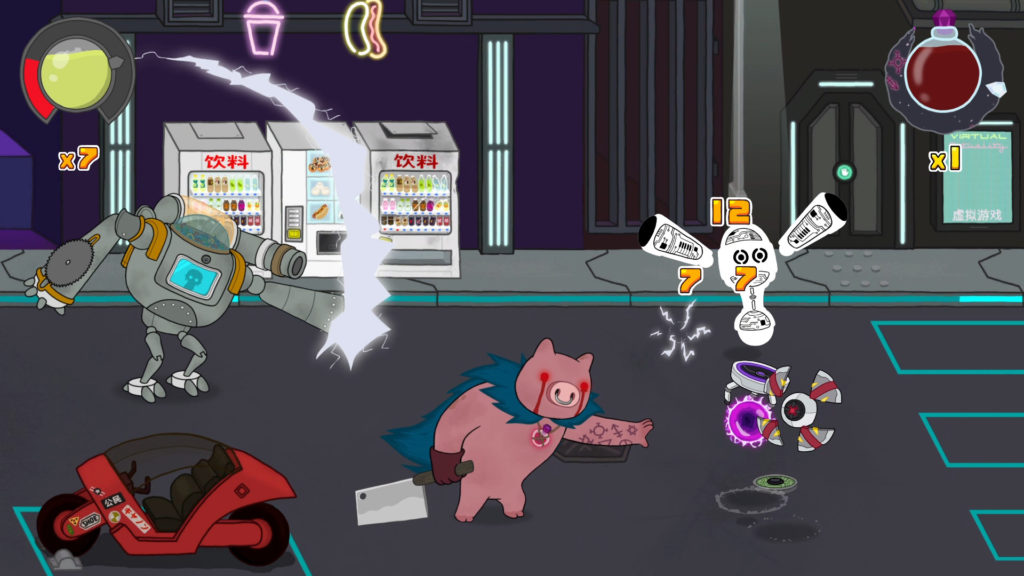 Compared to a lot of other games in the genre, Colossus Down has quite a few ways to conserve your health. You can guard to reduce damage from attacks, and even have the ability to dash through enemies to avoid incoming aggression altogether. If you do lose health, as long as you have enough soft drinks in the tank you can heal instantly at any time.

Although standard attacks can sometimes feel underwhelming, special attacks pack way more of a punch. You’ll receive your first skill point a few levels in, and can use it to unlock one of four powers. Each one is useful in a different situation. You might want a concentrated laser beam to deal with boss, or to summon fire from the sky to attack everyone on the screen. These abilities cost health to use, so you’d better be careful that the damage they deal is worth it.

To unlock more specials you’ll need to collect scrap metal. This crucial currency is obtained by destroying scenery in each stage, and breaking everything in sight soon becomes really tiresome. You’ll only be able to unlock 3 of the 4 most powerful abilities if you play the game normally, and to unlock the final one you have to turn on 1 life mode. Playing each level with 1 life was far too much for me, but otherwise you respawn any time you die and the gameplay feels somewhat trivial. 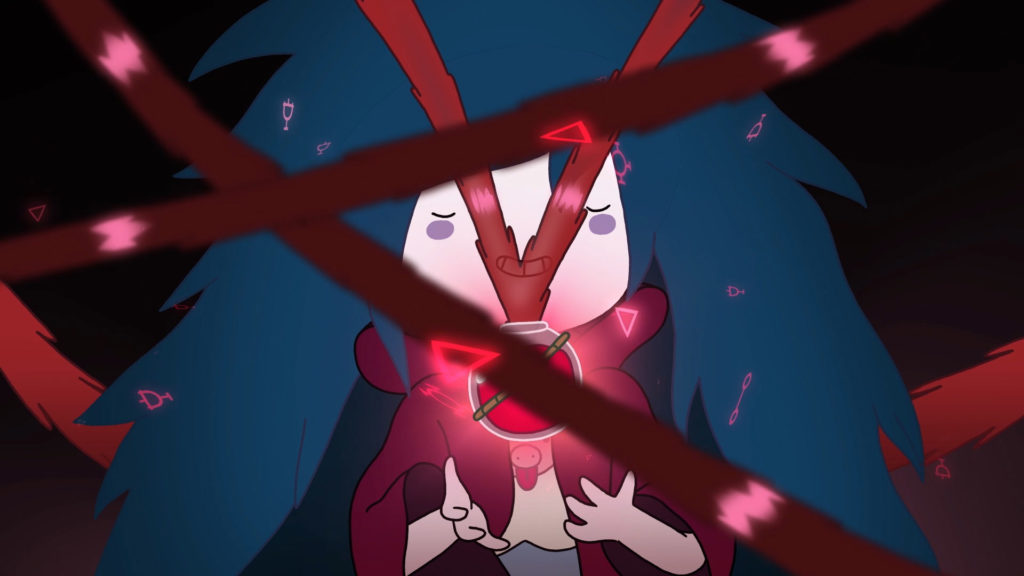 The best way to play Colossus Down is in local co-op mode. Although you can only play as Nika in single player, if you bring a buddy you can choose between the genius drunk and her occult friend Agatha Knife. Agatha was the protagonist of another Mango Protocol game, and is by far the most interesting character. Although they both pretty much play the same, Agatha inhabits a large bleeding pig god. This deity is the main figure behind Carnivism, a religion based around animals killing themselves by willingly going through a meat processor.

The world of Colossus Down is truly special in its own twisted way, but the beat-em-up gameplay lets the game down. If you’ve played the other games in this dark series you might find some fun here, but in a month where Scott Pilgrim was re-released it’s hard to recommend Colossus Down.

Colossus Down is genuinely funny, but it's gameplay just isn't good enough to compete with other Beat'em ups.