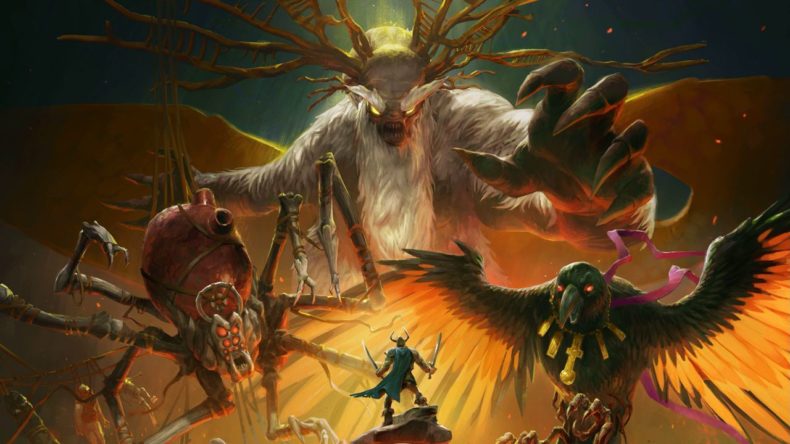 Loosely inspired by Celtic mythology, Gods Will Fall is set in a world where a warrior nation has had it up to the helmet horns with a pantheon of deities constantly enslaving and oppressing them. One day, after a particularly rough couple of ritual sacrifices, said nation assembles an army of elite hardnuts to invade the nearby island that the Gods have made their home. Unfortunately for them, the Gods aren’t about to take it lying down and promptly sink the entire fleet.

So each “run” begins with you assembling 8 randomised survivors on the beach, who you must then take through 10 caves to battle the Pantheon one by one. Randomisation is a big theme in Gods Will Fall, too. Your 8 would-be heroes will begin with different body types, strengths, weaknesses, weapons and relationships, so you never know what to expect. There are four body types, and a variety of weapons from swords and double hatchets to huge warhammers and spears, and there’s a rudimentary version of Darkest Dungeon’s mental health element that sees your heroes affected by things that happen to them or their compatriots. 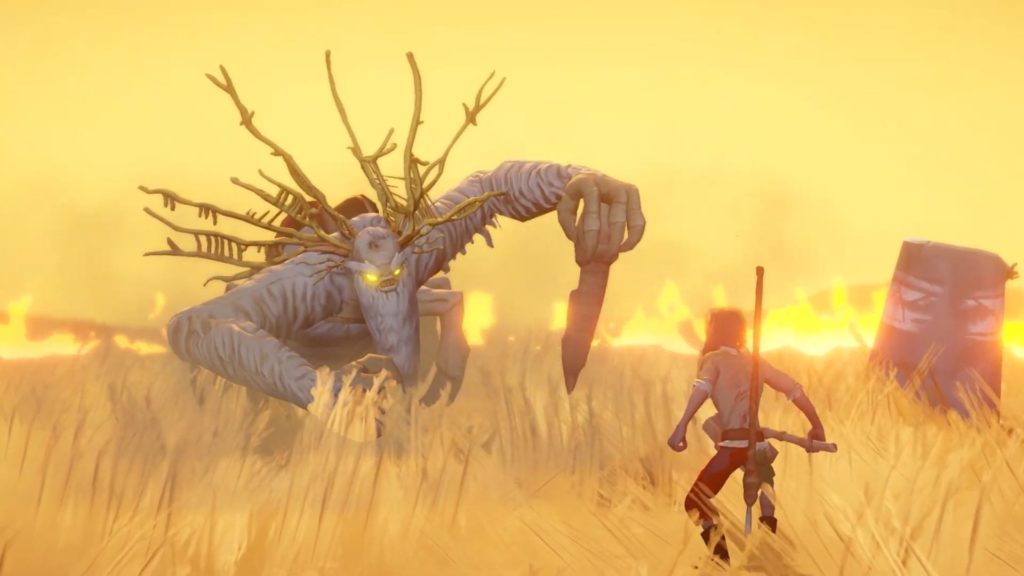 The hub is a large island with 10 caves, a burial mound and a well that will reward you with certain items in exchange for things you toss into it. At the mouth of every cave you’ll need to select a hero to brave the depths, which will consist of a battle through multiple minions to a final boss fight against the God in question. If you succeed you’ll emerge with some random loot and weaponry to distribute, but if you fail you’ll either remain imprisoned until another hero succeeds in killing the boss, or be slain completely if you’re killed by an enemy’s brutal attack.

Randomised rewards and outcomes is painfully double-edged though. Sometimes you’ll slog through a dungeon and barely survive to be rewarded with either nothing or, worse, weapons weaker than the ones you already have. Sometimes you’ll win and emerge quickened and strengthened, confidence boosted by your victory, whereas other times you’ll emerge battered and broken and will need to rest that particular hero for a few delves.

Having a hero get lost in a cave can also lead to his friends in the group being either demoralised or enraged. Some warriors will have personal history with one or more of the Gods, having lost family to sacrifice, for example. It’s an interesting system that means you can never predict exactly how a run is going to play out. Less fun is that the difficulty of each cave is also randomised every run, and once you enter a cave you can’t come out. 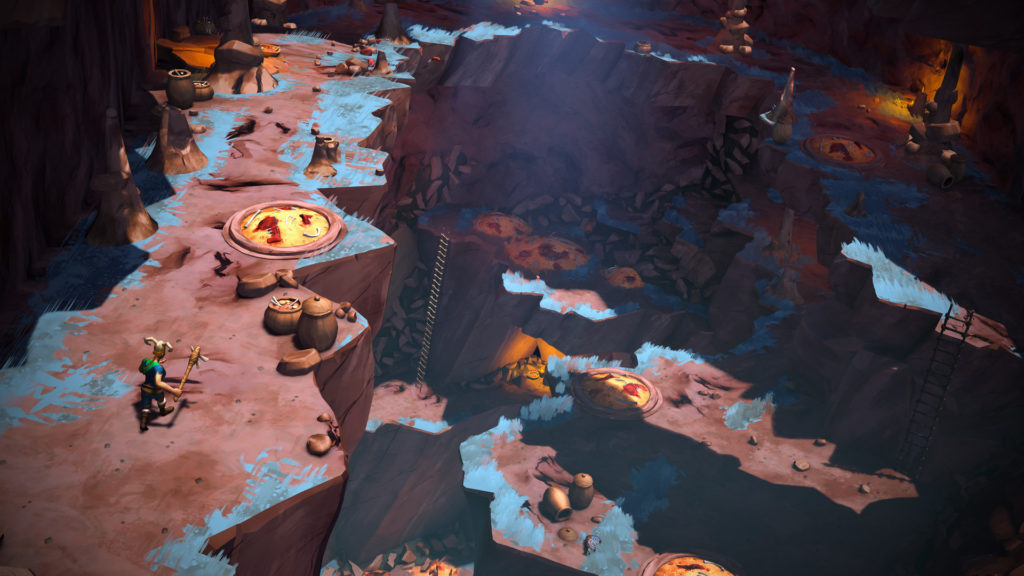 I spent my first few runs assaulting the cave of Water God Boadannu first as it was always a fairly easy victory once I understood his fight mechanics. However on about my third or fourth attempt, his cave was suddenly nails hard, filled with armoured enemies and mutated beasts far more powerful than what had come before. While this keeps you on your toes, it means that you may well attempt an almost impossible task that will almost certainly lead to you losing a hero right away through pure trial and error and it’s frustrating.

The health bar of every God (except one) is visible the moment you enter their domain, and slaying their minions will reduce it gradually as you make your towards the showdown. One in particular has landmarks within his domain that can be destroyed to weaken him instead, while another has forges scattered throughout that can improve or degrade your weaponry (again, this is random). It would have been cool had these elements also been randomised per dungeon, but they’re not.

Gods Will Fall is an enjoyable game to play if you have the patience for occasional trial & error insta-death and random difficulty. Usually, if you can get a few Gods under your belt and upgrade the stats and weapons of your warriors a little, you’ll stand a better chance, but I had many failed runs before I finally slew the 10th God with my last remaining warrior. A run can last anything from 2 or 3 hours to twice that depending on how it goes. 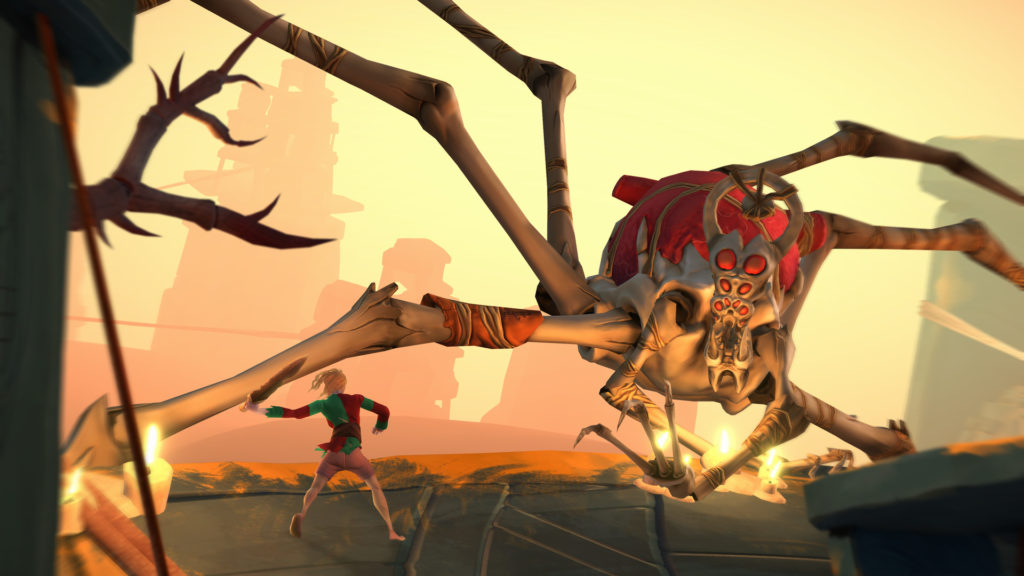 Combat is a mix of heavy and light attacks, and evasion, with the ability to parry by dashing towards an enemy when their weapon flashes. Obviously a pair of twin axes attacks faster but does less damage than a heavy mace, but your warrior’s stats are also a factor. Items like shields and bows, or meals for healing and various buffs, are found inside dungeons or awarded for victory (also totally randomly) but if a warrior falls while carrying them, the items are lost until you free that warrior. Beware that you can also die from mistimed jumps or clumsy falls (not helped by the camera, at times), which is always maddening.

Each warrior has a certain amount of Vigour, represented by a red segmented meter that depletes when you take damage. Dealing damage or parrying generates bloodlust, which fills up the meter with a glowing crimson mist, and hitting the left trigger will then cause the warrior to roar and refill their health. It’s a neat little system that keeps you on the offensive. You can also pick up most weapons dropped by an enemy to either wield or – and I recommend this – throw to either kill or stagger the God’s minions.

The Gods themselves are a varied bunch, some of whom are incredibly easy to kill. Carnoccus the Boar, for example, requires nothing but timing, as his attacks involve charging you or stamping the ground, and all you need do is dodge and counter attack until he falls. His cave is also the shortest, which makes him an ideal place to start. Krannus, too, is a straightforward fight, but differs greatly from the others because of its mechanics. 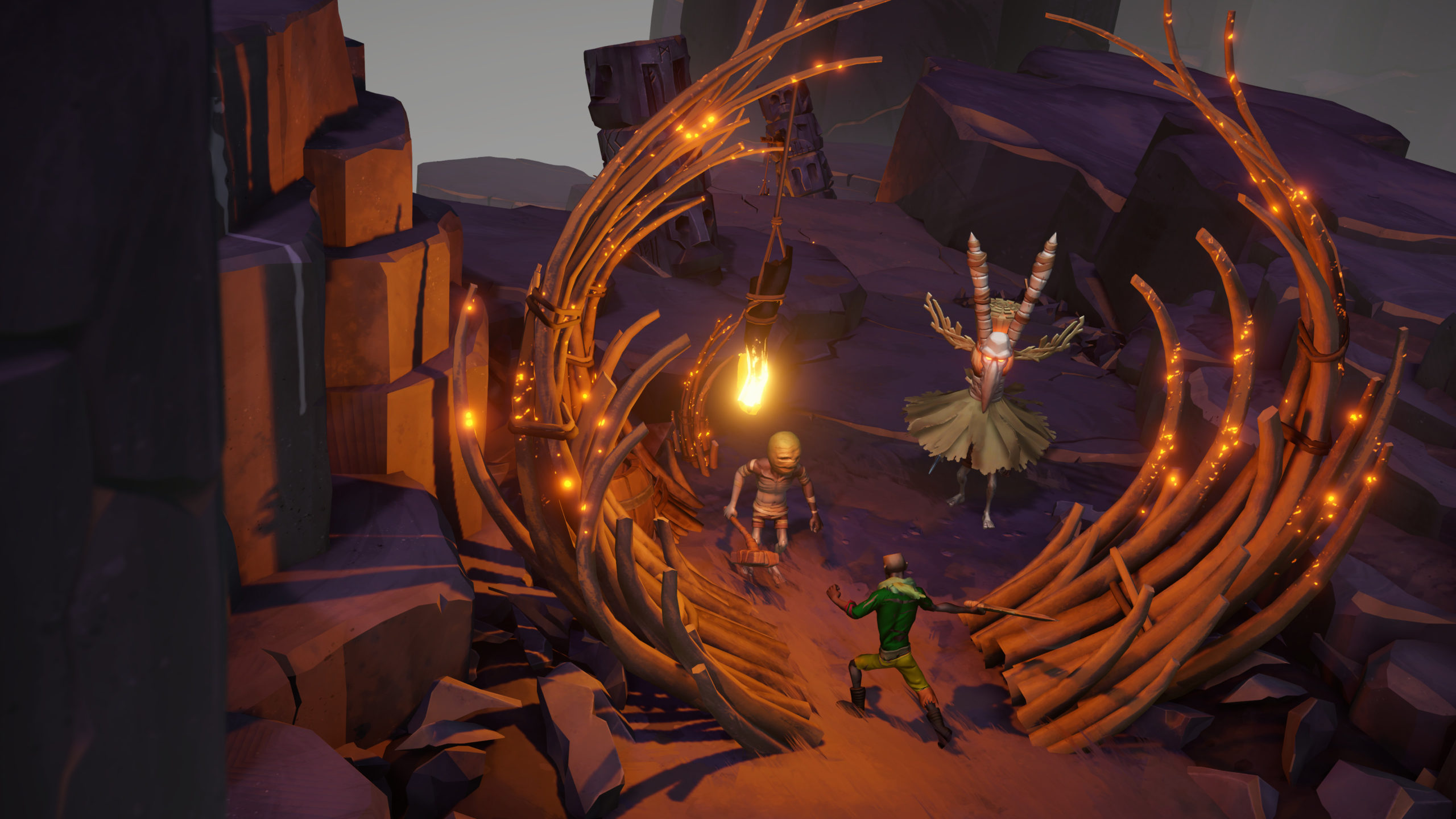 Others are not so easy, however. The lightning-fast, bow-wielding Methir-Shirraidh was a nightmare for me, claiming more of my warriors than any other God, and Osseus the Spider gets progressively harder the longer you take to kill him until eventually you simply can’t survive. Each fight is enjoyable though and, while none take very long or are particularly taxing in terms of the mechanics, they are a solid challenge when so much is at stake each run.

In terms of performance there are a few issues here and there with Gods Will Fall. It looks pretty enough on both Xbox Series S and Nintendo Switch, but it’s obviously noticeably crisper on the former. Also, while the frame rate mostly holds steady on Xbox (there are a few stutters in certain dungeons), it can tank fairly hard now and then on Switch, which when coupled with shaky cam effects and the ominous swaying of the camera can be at little unpleasant. I should also point out that while you can enlarge text on the Switch should you need to, the action can sometimes be very distant when the camera zooms out at specific moments.

Sadly, once you’ve slain all 10 Gods the game simply ends. There’s no New Game Plus or hidden difficulty mode, no way to continue or replay encounters. It’s a shame, because I was feeling invigorated when my final warrior Meredith, slew Methir-Shirraidh and freed the six other warriors who had fallen before her, wrapping up the game for me. I’d have happily took the same heroes for another run, progressively getting stronger by facing tougher versions of each God.

I had a lot of fun with Gods Will Fall, despite rage-quitting it more times than any other game in the last few months. Taking your time to learn the layout of each dungeon and the mechanics of each enemy and God is worth it, and you will certainly become attached to your strongest, bravest and best-equipped heroes, which hurts all the more when you make a mistake and lose them. The randomised nature of each run can work both for and against the game, though, and frustrates more often than not, and the odd platforming moment can ruin the fun when you misjudge a jump or clumsily roll off a ledge while trying to evade an enemy. Aside that though, it’s a solid hack and slash adventure that will satisfy your craving for challenge while it lasts – it’s just a shame it doesn’t last longer.

Gods Will Fall is a solid adventure with some cool ideas that will satisfy your craving for challenge while it lasts.