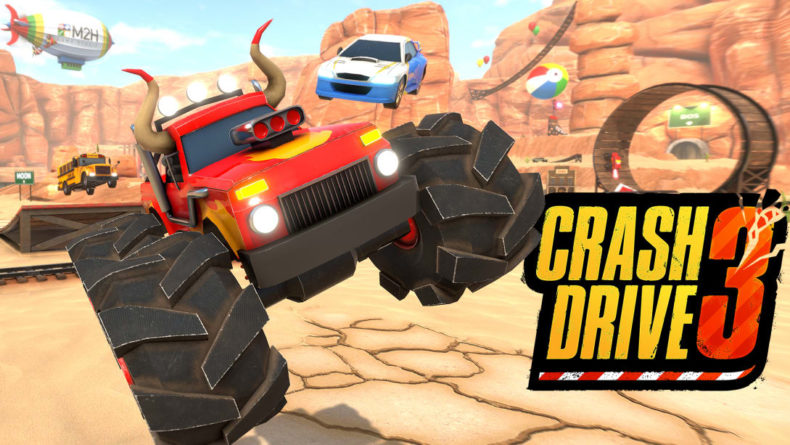 Serious driving games have never really been my jam. Carefully balancing when to brake at a corner or (god forbid) tuning up a car before a race will never appeal to me, but if you throw in some crashes and stunts then you’ve got my attention. Whether it’s the slow motion destruction of Burnout or the weapons of Twisted Metal, there’s plenty of fun to have on 4 wheels if F1 or Rally aren’t for you. Crash Drive 3 fully embraces the sillier side of driving, providing the perfect playground for those seeking a more arcadey experience.

Crash Drive 3 is made up of 5 huge worlds, all packed full of stunt ramps, glowing green rings and collectibles to find. After a few tutorials you’ll soon learn to boost your way through the air to reach every nook and cranny, all while performing gravity defying flips and earning a bit of precious cash for your trouble.

Crash Drive is more than just aimless exploring though, and every couple of minutes a new event will start for you to compete in. Some of these are fairly simple, like racing through checkpoints or getting a high stunt score. Although these are fun, the more outlandish games like bursting a beach ball with pure ramming speed or collecting coins that fall from the sky are a far more interesting way to earn some pocket money. 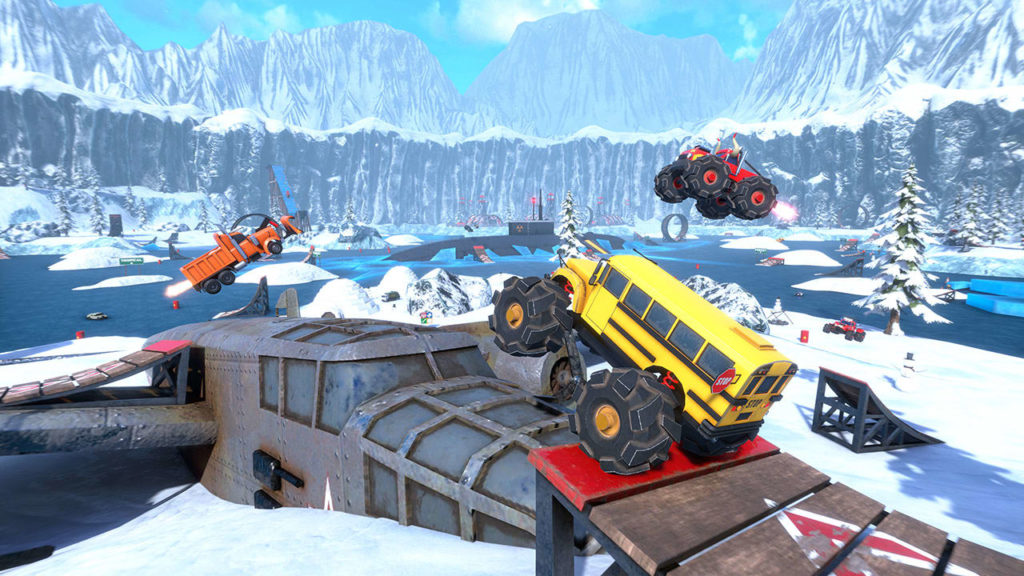 The most important thing you’ll be spending money on is access to new worlds. By earning enough cash and flying through 8/10 of the current area’s rings you’ll can unlock a new themed area to play in. There’s an Arctic tundra, a medieval forest, and even the Moon to backflip around on. So it’s well worth stocking up on a big ole pile of gold.

Once you’ve got enough places to play around in, you can use the rest of your cash to buy and upgrade cars. There’s a huge range of vehicles to unlock, from muscle cars, to a school bus and monster truck. All the vehicles I tested felt good to drive, even if they sound a bit bulky. Most of them are unlocked by buying and upgrading previous cars, but there are also some you’ll need to find lots of hidden collectables to obtain. 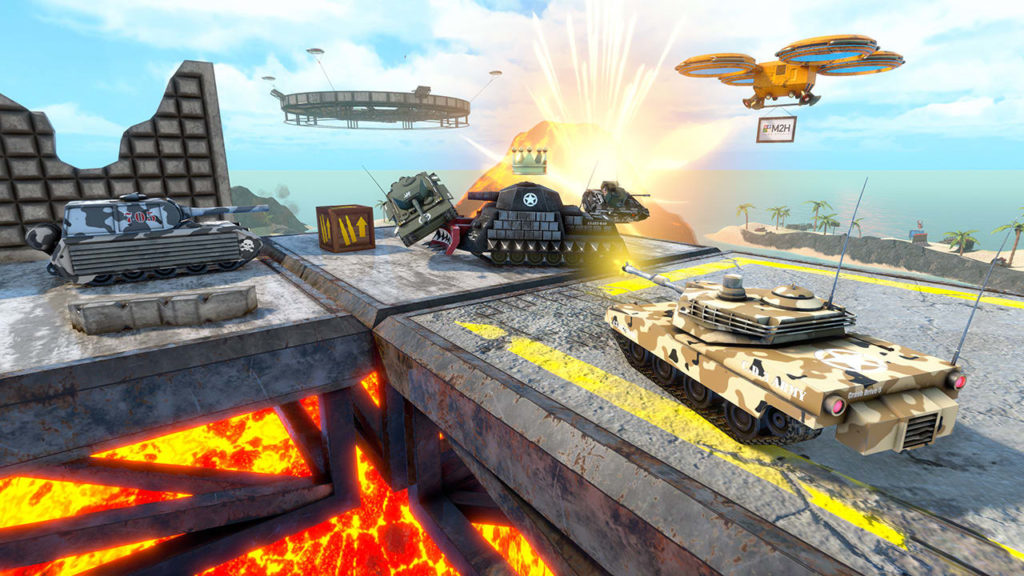 If driving and flipping isn’t enough for you, there’s also a world dedicated to huge tank battles on floating arenas. The aim of the game here is to blast the other tanks off the edge of the arena to score points. You get bonus points for kill streaks and multi kills. That said, it isn’t my favourite part of Crash Drive 3. But I did enjoy taking a break from sick tricks every once in a while for a bit of war time fun.

Lots of the challenges in Crash Drive can be played offline with a time limits to contend with. But the game is best when playing online (with cross platform play) against others. There are extra games modes that’ll activate when you’re online too. Such as the crown grabbing King of the Hill or Cops and Robbers. Playing with others is particularly chaotic, with plenty of the titular crashing guaranteed. 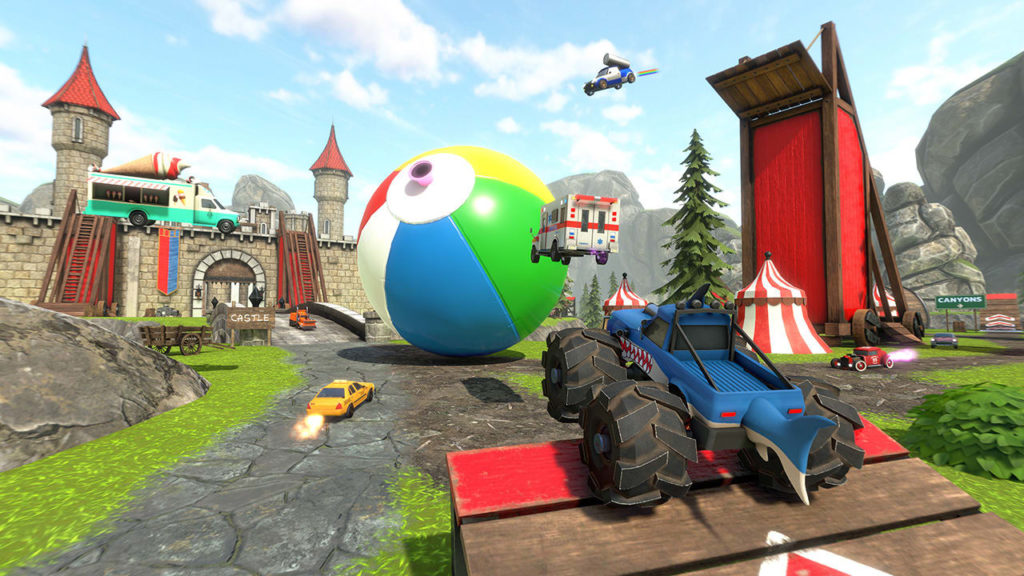 I had a lot of fun during my time with Crash Drive 3. But it’s worth mentioning that there are some noticeable technical issues with the Switch version of the game. The frame-rate just isn’t up to par. This means the whole game judders. The issue isn’t really due to frame drops, the framerate is just consistently low throughout. I was able to cope with it and enjoy the game regardless. But if your tolerance for these issues isn’t high this isn’t the version of Crash Drive for you.

Crash Drive 3 is a ridiculous stunt playground that revels in being packed full of dumb, brash content. The events are all entertaining, and exploring each of the themed worlds for secrets while flipping through the air is really satisfying. If you’re able to cope with the frame-rate on the Switch, you’ll have hours of fun racing around on your own or with others.

Framerate is disappointing
Tank battles can get old

Crash Drive 3 is pure daft entertainment alone or with others, but unfortunately the framerate on Switch is less than ideal.