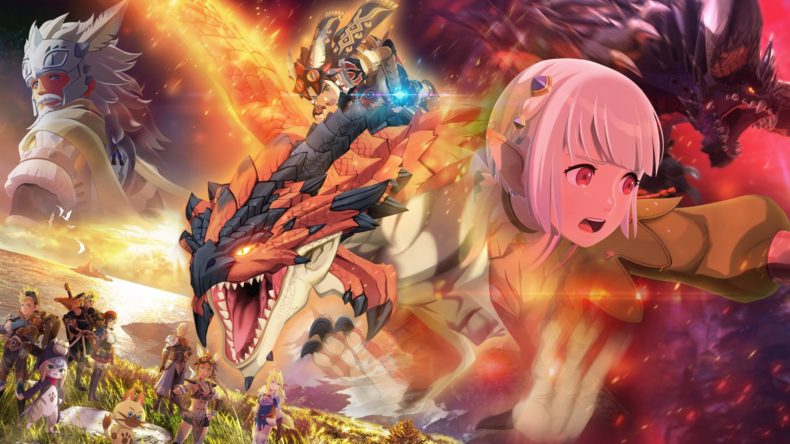 When given the choice, I have a tendency to gravitate towards the more violent games. I like explosions, and spectacle. I’m partial to colour palettes that are basically just 208 different shades of brown. Which makes it all the more surprising that a game like Monster Hunter Stories 2: Wings of Ruin has captivated me so thoroughly. It certainly has its share of spectacle, but it’s also bright and colourful and, well… it’s just wonderful.

If you played the original on Nintendo 3DS, you’ll already know what to expect from Wings of Ruin. There are some quality of life improvements and some new features, but the bare-bones mechanics are largely the same. Those coming into this spinoff franchise for the first time from World or Rise are in for some surprises. For one, don’t let the beautifully twee visuals confound you: it’s every inch as dense as any Monster Hunter title. It looks slightly kiddified, sure, but if you don’t know your lifesoot from your vital essence you’ll be on the end of something’s toothpick by mid-afternoon.

At face value, Monster Hunter Stories 2 is closer to a traditional JRPG than to the main Monster Hunter titles. It also riffs heavily off the 2016 anime, featuring some of the characters, places, and events. So if you never saw it you’ll have a hard time connecting as strongly with some of the characters. That said, they’re all pretty likeable and the story is easy to follow. It’s also exhilarating at times. The action-packed cutscenes more than make up for the surprising number of weird swamp-men, talking cats and Pikachu-alikes. 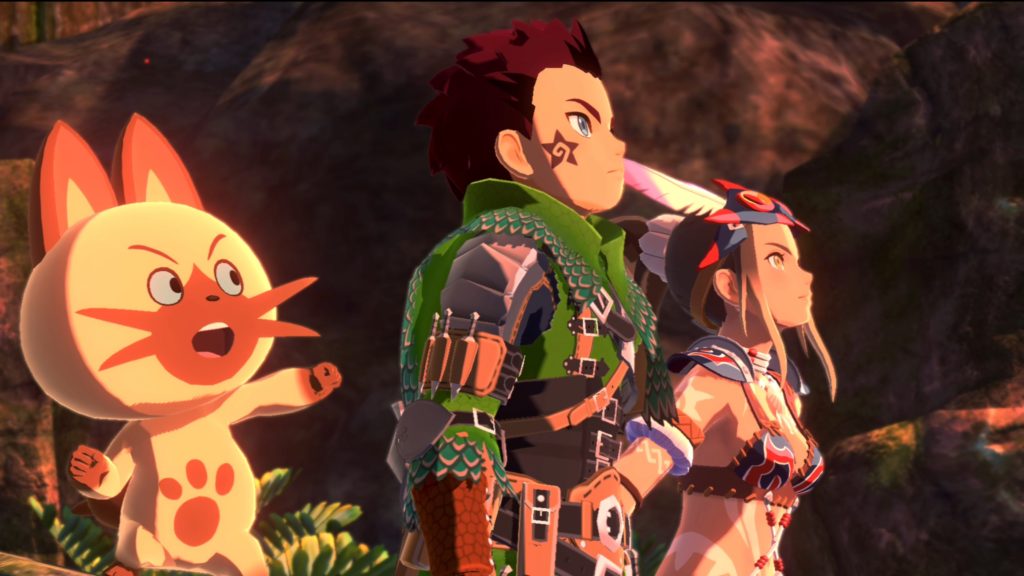 The Monster Hunter franchise has always been fairly non-committal with its setting and timeline. There’s usually a vague sense that they’re all set in the same world during different time periods. Wings of Ruin is fairly unique in that it continues the story of existing characters. You play the grandchild of Red, a legendary Rider who all the other characters hero-worship to an almost fetishistic extent. The events following his disappearance have caused a calamity to befall the land. The Rathalos have migrated, while all the other monsters are being driven insane by strange purple lights called Rage Rays. You’re aided by Navirou, a character from the anime and previous game. He’s a Felyne, which is not the same as a Palico or a Melynx (seriously, cats are a big deal in this universe). With him as your guide, you must help a line-up of other Riders and Hunters to determine if your newborn Rathalos is the catalyst for the next apocalypse, or the key to ending the Rage Rays.

As stories go it’s fairly straightforward, but the way it’s told here is fantastic. Some of the cutscenes, especially around the mid-point, are pure adrenalin. There’s conflict, double-crossing, heroic sacrifices, people jumping onto moving airships, and an awful lot of monsters roaring at the camera. Some of those conflicts may wrap up just a little too neatly, but it’s better than I was expecting.

It’s the combat and the exploration that make this game truly stand out, though. In many ways, the structure is as formulaic as any Monster Hunter game before it. Despite having a critical path to unlock new features, areas, and monsters, you’re free to explore any accessible areas. As you roam around the map you’ll come across monsters just going about their business. There’s over a hundred to find, including the small monsters, and many of them are just there to be fought. 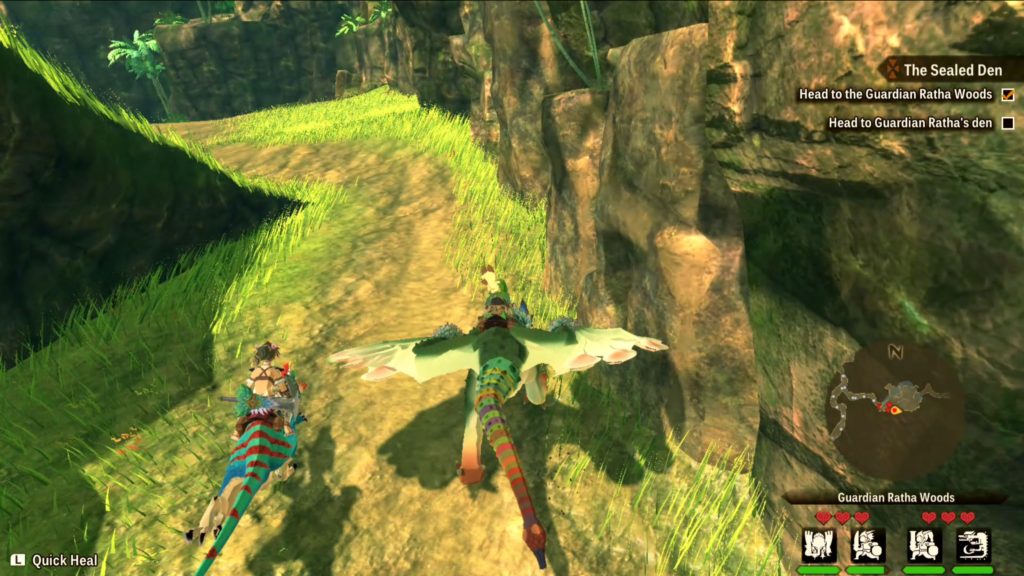 Defeating an enemy gives you materials with which to craft weapons, armour, and support items a la the franchise standard. Different gear possesses different intrinsic skills too. Some will be familiar, like Divine Blessing which can reduce damage taken. But there are new skills in Wings of Ruin, too, such as Critical Kinship. This allows the bond between you and your monster companions to grow faster in battle. As usual, choosing which gear to equip is more in-depth than simple attack and damage values.

While fighting monsters is exhilarating fun, it’s not the only way to engage with them. If you force a monster to run from you in battle, it’ll bolt for its nest. At this point you can follow it to the place where it sleeps and, in an act of admittedly equal cruelty, choose not to finish it off but to steal its offspring instead. Raiding monster nests gives you eggs, which you then hatch at a stable. The beasts that emerge are Monsties, a name I struggle to say without gritting my teeth. Whereas monsters must be subdued, Monsties are friendly and can be ridden.

You can use the Rite of Channelling at any stable to transfer specific genes from one Monstie to another. You could increase a given Monstie’s health points, or add skills to their repertoire that they other wise wouldn’t have. There are scores of genes, including rare types. It’s worth exploring every monster den on the map, especially rare ones, to find all the possible Monsties. 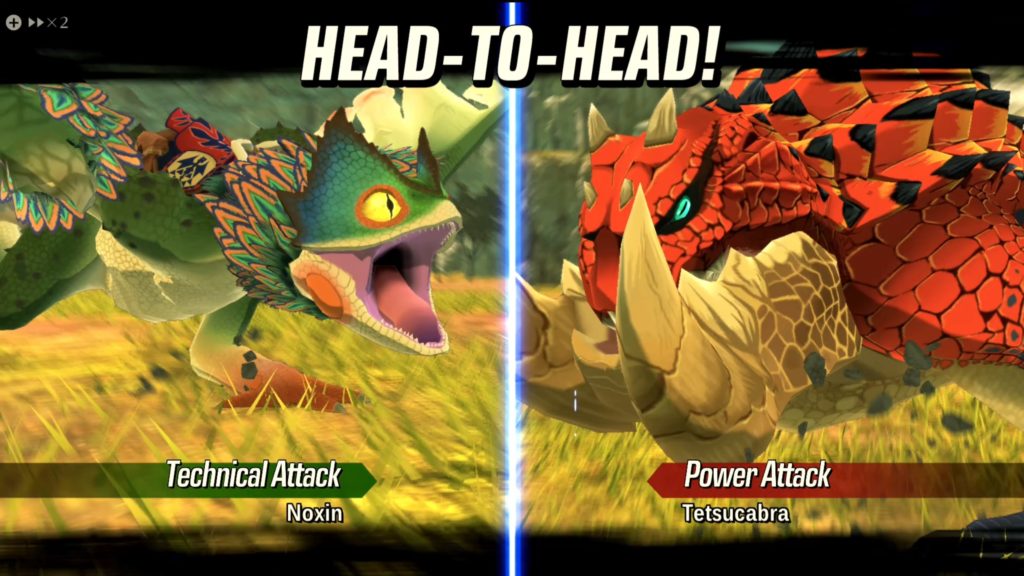 At any given time you can choose five different Monsties to accompany you into the world. The sixth slot is reserved for Ratha, your story companion who can’t be swapped out. Each has one or two abilities that aid in exploration. Some can swim, others can smash through rock walls. Some are able to jump, climb ivy, roar to subdue smaller monsters, or dive underground to retrieve treasure. Most of these abilities aid you in finding scattered chests full of items and gear. A few monsters can disappear, allowing you to traverse the map unmolested. Others can highlight specific gather points nearby.The primary function of a Monstie, though, is to fight beside you.

Combat in Monster Hunter Stories 2: Wings of Ruin is a complex but immensely satisfying exercise. Without confounding you, it’s a turn-based system that relies on a mesh of mechanics to work. The first of these mechanics involves your loadout. There are six weapon types available in Wings of Ruin: Greatsword and Sword & Shield; Hammer and Hunting Horn; Bow and Gunlance. These occupy three tiers: slash, blunt, and pierce, respectively. Different damage types affect different monster parts. For example, the hammer is good for breaking heads and armour. If you know the basics of Monster Hunter, you’ll pick this up quickly.

In addition, each weapon type has a variety of skills that can be learned and used in battle. The Hunting Horn, for instance, bestows buffs, while the Greatsword can inflict massive damage. Each skill uses Kinship Points, which you gain with every turn. At 100 points, you can choose to ride your Monstie and execute a powerful Kinship Strike. These are unique for each Monstie and feature some incredible animations. You can also opt to skip them and speed the battles up completely if you want to. 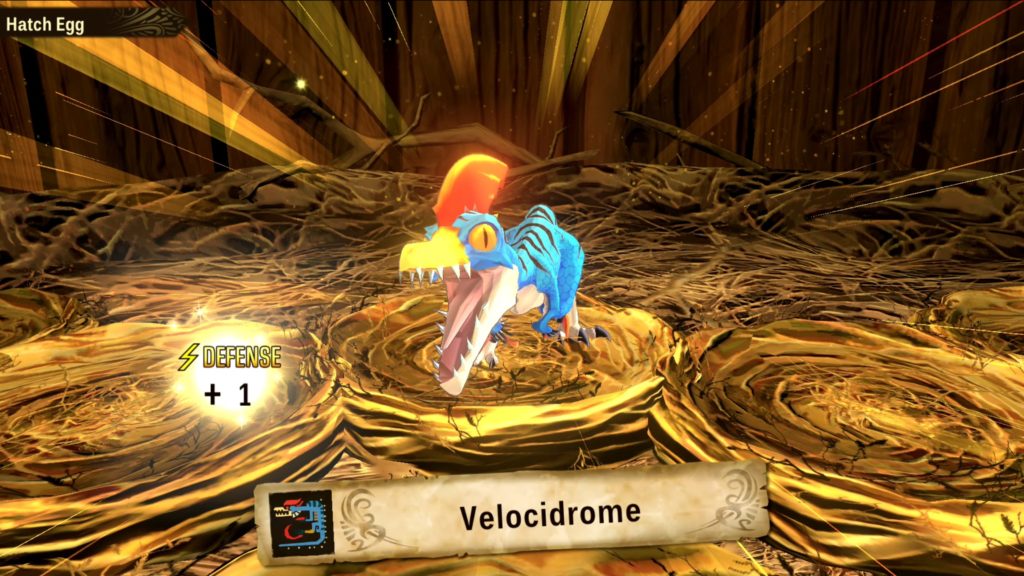 For most of the story, you’ll fight alongside other Riders or Hunters. These are AI-controlled, but fill in the roles dictated by their gear. So the Rider who fights with a Hunting Horn will buff and heal regularly. An archer will lay down as much piercing damage and status build-up as possible. They’ll occasionally use healing items (theirs, not yours), but most of the healing will be your responsibility. If you can unleash a Kinship Strike at the same time as them, the damage is insane.

If the combat was no more complex than that, it would be enough. However, there’s also a rock-paper-scissors mechanic to consider, too. All combatants have a primary focus: Strength, Speed, or Technical. Each cancels out one of the others, which leads to head-to-head clashes. If you win, you’ll inflict more damage and cancel your opponent’s attack. Learning how to read the enemy is essential – especially as the focus switches when they become enraged.

Add to this the elemental and status build-ups of the standard titles, plus a variety of button-mashing contests between the monsters, as well as traps, bombs, barrel-bombs, and various throwing knives and the combat becomes about as complex a system as I’ve ever played. And yet, when it all clicks, it’s gloriously addictive. Losing a fight will kick you back to the nearest town, but you don’t lose much besides your dignity. 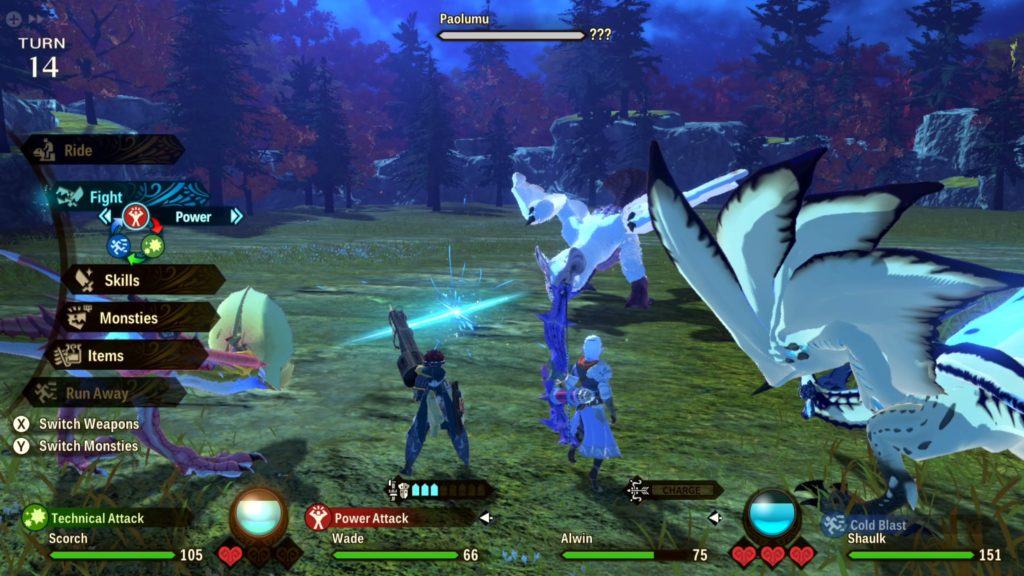 As you progress through the story you’ll unlock new features. Among other things, there’s a Tournament mode that will pit you against AI Riders or other players. These are incredibly challenging fights against opponents who can do everything you can, but could also out-think you in ways only other players can. There’s also a Trials mode where you must defeat monsters within a certain number of turns. And finally, there are co-op Expeditions, which allow you to explore the world with other players. We’ll be able to talk more about the multiplayer aspect after the game launches.

There is so much content in this game at launch that fans of the series or of JRPGs in general could easily put in fifty hours before the story is done. And after that, there’s still more to see and do in the endgame. My only real complaint is that, on Switch at least, there are occasional frame rate issues. It also does a weird thing where, after a fight, it turns you around on the map. I don’t know why it does this, but it’s annoying.

Graphically it’s more functional than stunning. Monster animations are in keeping with the main franchise, and the cutscenes are bright and colourful, but some of the environments come off as a little bland. There are few stand-out features, and most areas within a given biome look very similar. It’s not a major problem, but it becomes more noticeable when you spend long periods farming or grinding in a particular area.

A few performance issues on Switch

Monster Hunter Stories 2 is a fantastic adventure filled to the brim with challenge, heart, and - most importantly - monsters.