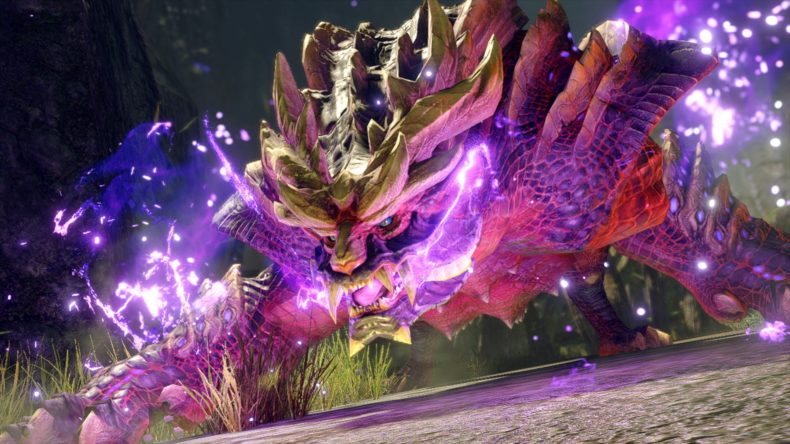 For many people, 2018’s Monster Hunter World was an entry into a franchise that had already been going for a dozen years across various systems. A series often whispered about by the hardcore gamers out there who could stand up to its stern challenge and rigid traditions. World broke it open for a lot of people, myself included, allowing us in with wide arms and presenting a massively feature-rich adventure to get stuck into.

After seeing it ported to PC with the release of the Iceborne expansion, World fans began to wonder if we might see it on the Switch one day, albeit with some serious technical concessions. But Capcom were already busy brewing the successor in Monster Hunter Rise, the second Monster Hunter game to grace the switch (after Monster Hunter Generations Ultimate), but the first made specifically to run on Nintendo’s hybrid console.

Doubters can rest easy, though: from what I’ve seen so far (aside the demo we haven’t been able to play online yet) the frame rate and performance holds steady, even when there are multiple monsters and NPCs on-screen at once. It’s not a graphical powerhouse (although it looks lovely in handheld mode), but it is a technical marvel. Even the loading times are short and snappy, meaning you’re in and out of the action that much quicker. 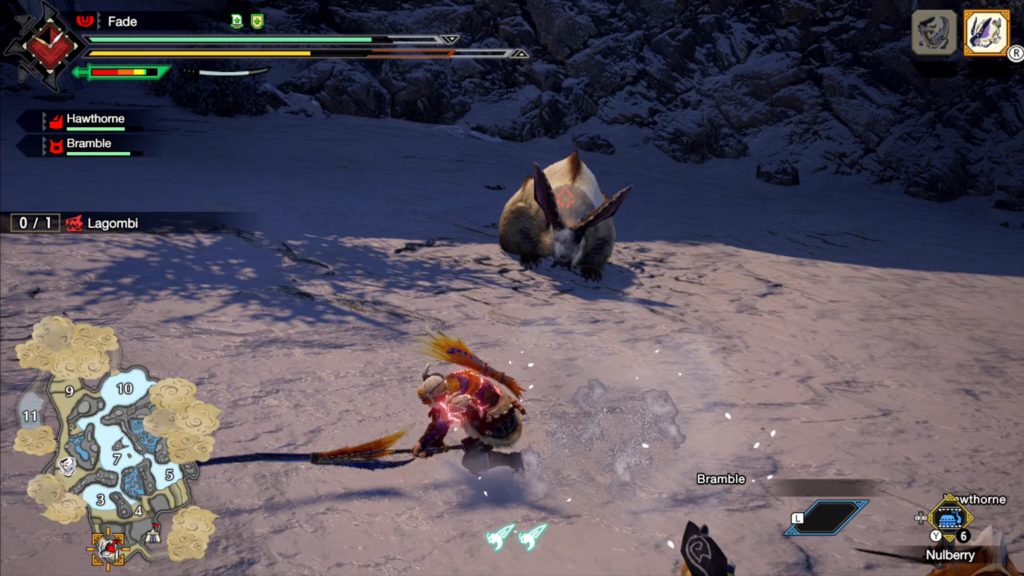 In fact, the pacing has been upped considerably throughout. Gathering materials in the wild is faster; smaller, more condensed maps get you to the action quicker, and there’s just less messing around in general. Even inexperienced players will rattle through the Low Rank content pretty quickly because it takes a while for Rise to start throwing walls at you. And by the time it does, you should have a fairly firm grasp of what you’re doing.

The story focuses on the village of Kamura, a quaint little spot in the middle of nowhere which, every fifty years, is threatened by the Rampage, a mysterious natural event that sees all the larger and more ferocious monsters converge on the village. Their only option is to fight back – which is where you come in. Whereas World sets you up as a green recruit who must be moulded into a badass, Rise forgets the set-up and immediately introducers you as a Hunter sent to aid Kamura. You’ve got growing to do, for sure, but Rise very much treats you like you’ve played the series before.

It still starts you off slowly, giving you a choice of running solo Village Quests or multiplayer-enabled Hub Quests, but it’s clear which is the intended path. Village Quests advance the story and are generally easier, so it’s best to start there, feeling your way through the initial few until you find your feet. Newcomers will find this early part super helpful, while veterans will be thankful it doesn’t outstay its welcome. 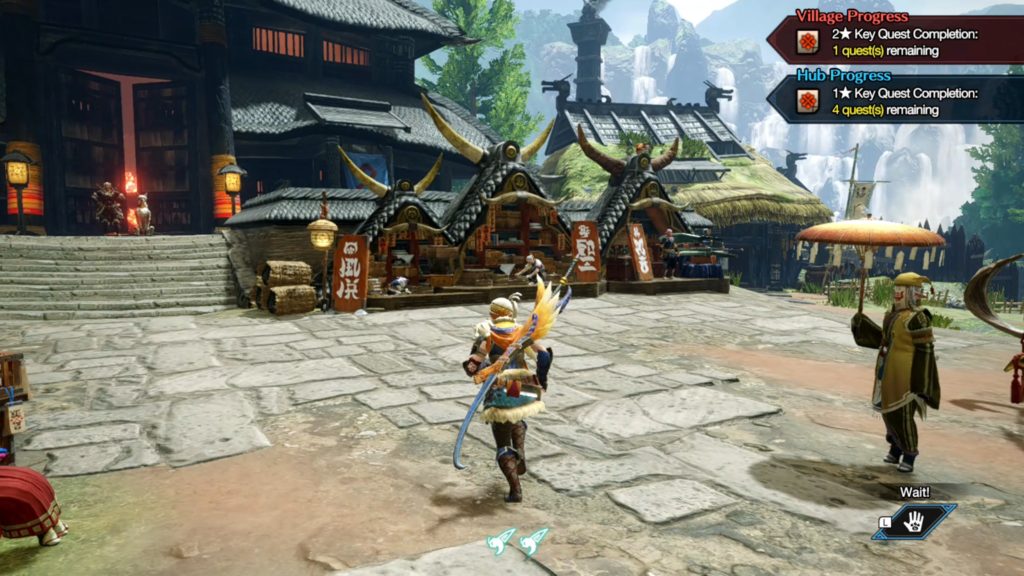 Before long though you’ll be tackling quests to hunt and kill or capture large monsters, and it’s during this stage that you’ll get to grips with the new village hub and its many, many NPC denizens. Capcom have done a lot of work with the Hub, too, attempting to make it as accessible as possible while still spreading it out like a proper settlement. You can find everything there, from smiths to upgrade and forge weapons and armour to quest-givers, the Canteen, various vendors and access to other areas such as the multiplayer Gathering Hub and the Buddy Plaza. It’s a big place, but it’s beautiful, inspired by Japanese culture (as indeed is the gorgeous music and many of the monsters and armour sets) and full of vibrancy.

Palicoes return from previous instalments to help you on your hunts, but now you’re also joined by a Palamute, a canine companion who will fight beside you as well as carry you from place to place. After you create your hunter, you’ll be able to create a Palico and Palamute to be your permanent companions through the game. Once you start youi can visit the Buddy Plaza and swap them around if you want to, taking two Palamutes or two Palicoes out on each quest. It’s easy to get attached to your buddies, so it’s a good thing you can craft armour and weapons for them, too.

Skill systems seen in Monster Hunter World have been tweaked rather than completely overhauled, and Capcom have incorporated elements from the earlier games. In World for example, you could craft charms for permanent buffs but had to grind for Decorations to enhance or imbue certain skills on your gear. It relied heavily on RNG and meant many people struggled to get the build they wanted because they could never get a particular rare Decoration to drop. In Rise this is swapped over, so that charms are found and Decorations can be crafted, meaning you have more chance of developing that build you saw your squad-mate using. 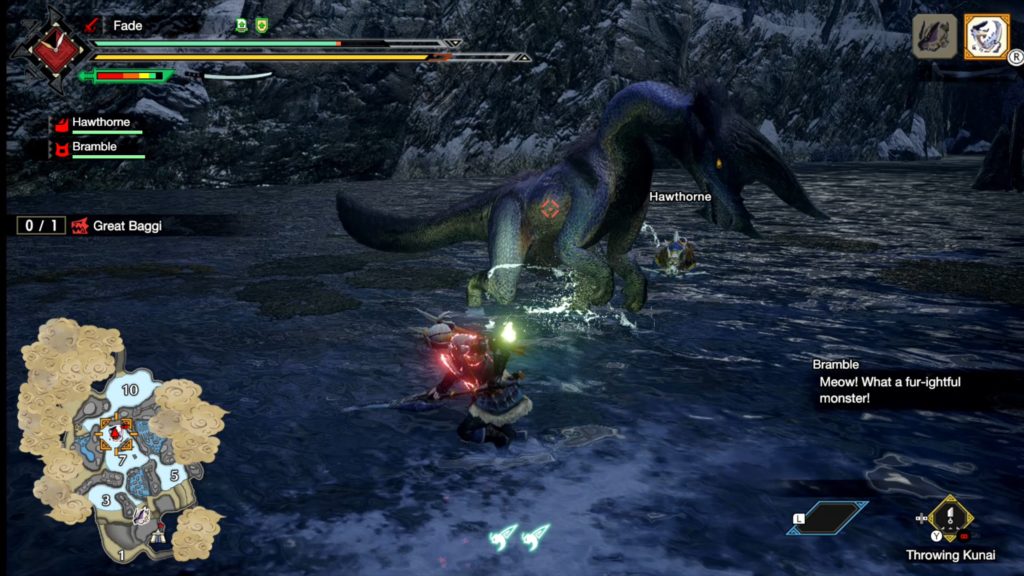 The controversial Clutch Claw is also gone – so no more softening monster hides over and over during a hunt. Instead you have the Wirebug, a tricky little insect that lets you swing across gaps, propel yourself into the air or, crucially, bind monsters to be temporarily ridden. Wyvern Riding is one of Rise’s biggest new additions, and it’s almost as satisfying as wall-banging monster heads was in World. Now, if you wear a monster down enough and hit them with a “Silkbind” move assigned to your weapon, you can truss them and ride them, attacking other monsters or just, well, wall-banging their heads until they fall over. It’s a fun new tactic, but I miss World’s mounting mechanic a little. The Wirebug also allows for much more verticality, and the tighter maps compensate for their smaller area by being much more vertical than ever before. You can now run up walls and climb to dizzying heights to seek out secrets and rare endemic life to aid you in your quests.

Perhaps the biggest addition to Rise is the Rampage itself. Rather than just a fancy word to give some context to hunting beautiful and intelligent creatures to near extinction, the Rampage is an event in which you can very much take part. Periodically (and later, optionally), you’ll be called upon to defend Kamura from hordes of rampaging Wyvern. In these moments you’ll need to lay down defences such as Ballistae, explosive traps and cannons to repel the hordes and keep them from destroying the village. You’ll get multiple waves of a variety of monsters, and will need to utilise the defences you’ve set as well as your skills as a Hunter to beat them back. You can even call on NPCs from the village to help you.

The Rampage Quests are great fun. They feel like the very best of World’s Siege events, only with fewer complications, and all the spectacle and noise you’d expect from fighting two or three large monsters at once. While we haven’t tried it with other players yet, it’s an almost guaranteed hoot trying to coordinate around multiple monsters and hunters until the Alpha comes, the big monster leading the horde, who must be dealt with to end the Rampage. 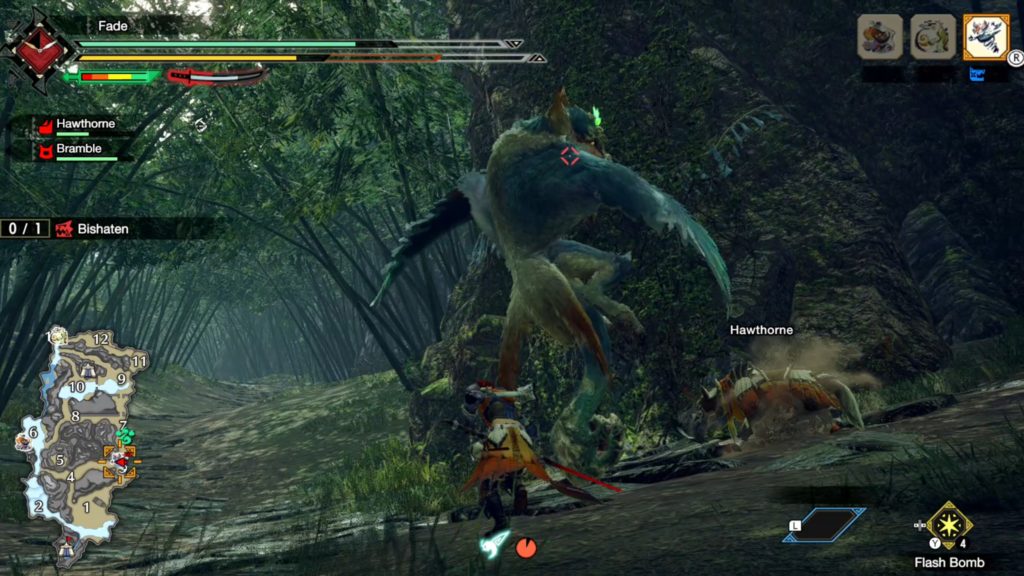 There are over 30 large monsters to hunt in Monster Hunter Rise, with more already promised, and it’s a diverse, colourful bunch. And the locales in which you’ll hunt them are well thought-out, cramming a lot of landmarks and areas into comparatively small maps. The Lava Caverns for example, have an upper area under the sky, with dark caves beneath fractured by rivers of molten stone. Where possible, the vistas are designed to astound you and, while the Switch lacks the graphical power of large consoles, it still manages to look pretty incredible at times.

There’s so much to talk about in Rise that I feel I could go on and on. New vendors and systems, new armour sets, weapons. There’s the Petalace, which determines the effects of the Spiribirds you’ll locate in the wild for buffs to health, stamina, damage and defence, or the Buddy Dojo where you can send your companions to train while you run Quests with substitutes for a bit. It feels like Capcom have thought of everything, and if I have any complaint at all it’s that the story doesn’t conclude in Rise – we have to wait for the free title update a month after release for that.

Which here doesn’t feel like a major blow. The update will be free, and there’s already tens or hundreds of hours of hunting and crafting and grinding and building to be done before you have to worry about that. Currently it’s missing a strong endgame like World’s Guiding Lands which, again, is likely to be addressed and hopefully soon.

But it feels churlish to complain about wanting more when I’ve still got armour sets to build, quests to finish, gear to craft and monsters to hunt. Monster Hunter Rise is a huge, rich game, filled with things to see and challenges to overcome, which manages to feel incredibly accessible to newcomers while still catering to the veterans. It’s a superb entry to the Switch’s bustling library, but more than that, it’s a stunning example of a game created by a dev team that know exactly what they’re doing.

Monster Hunter Rise brings enough quality of life improvements that it’s arguably better than World was at launch. A strong line-up of monsters, loads of stuff to grind through, and the series’ highest level of accessibility to date make Rise one of the Switch’s best games and an absolute must-have for series fans.