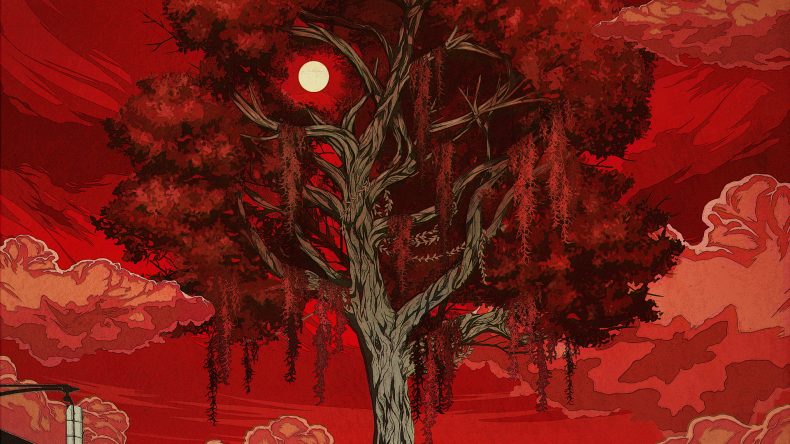 Explaining the appeal of Deadly Premonition to someone who didn’t play the first game (or worse, didn’t like it) is no small task. The outlandish horror game is one of my all time favourites, despite a list of “flaws” as long as my arm. SWERY and company managed to create what I’d call the first game that’s “so bad it’s good”. Inappropriate music would drown out the cutscenes, objects were wildly out of proportion, and hours of the game were spent orienteering around the map with nothing but movie facts to accompany you. Alongside these baffling design decisions was a story beyond absurd, yet incredibly captivating – packed full of murder, red trees and coffee. I wouldn’t change a thing about that glorious mess of a game, but the prospect of a sequel was concerning. What if the gameplay was improved too much, or the music didn’t play loudly over the voices? I’ve never been so worried about a game being good.

Deadly Premonition 2 is both a prequel and sequel to 2010 cult classic, and once again you’ll be playing as Special Agent Francis York Morgan solving murder mysteries in a small rural town. Set in the deep south this time around, the Twin Peaks aesthetic has been replaced by voodoo priests and Creole cooking. Upon arriving in Le Carre, York (and his split personality Zach) discover that the granddaughter to the wealthy Clarkson family has been murdered at a mysterious altar, and the game is afoot. Alongside working out this small town mystery you’ll also be playing as Special Agent Aaliyah Davis, questioning Zach about the unbelievable cases he’s solved over a decade in the future. With the help of your pizza-obsessed colleague Simon, you’ll be questioning the now dishevelled former agent about his shady past.

It wouldn’t be a Deadly Premonition game without an outlandish cast of characters, and A Blessing in Disguise doesn’t disappoint in that department. Of course York is as socially inappropriate and movie-obsessed as ever, thoroughly confusing everyone he meets. The supporting cast are just as ridiculous, from the woman who goes bowling 12 hours a day, to the sheriff who speaks like he’s narrating a movie trailer. Meeting a new character is always genuinely exciting, as you never know what Deadly Premonition 2 is going to throw at you next.

When you’re not conversing with the locals, your adventure will often lead you into the horrific otherworld. In these monster filled segments you’ll use you’re trusty tranquilizer gun “Mr Alligator” to shoot down all manner of voodoo horrors. These third person shooter segments are surprisingly serviceable, and the sheer amount of health and ammo drops mean you’ll never have to fret about failure. To finish off these missions you’ll face off with a huge boss relating to the investigation. Despite their intimidating appearance, they rarely survive long enough to launch more than a couple of attacks, which amused me greatly. Outside of solving mysterious and blasting clown monsters there’s plenty to do in Le Carre; when Mrs Carpenter isn’t hogging the lane you can go Bowling, you can take a boat ride through the bayou, or play a genuine stone skimming mini game. Each of these activities rewards you with items that you absolutely don’t need to progress, but who can resist going for a skimming high score?

Navigating Le Carre is made easy thanks to a very practical mode of transportation, the humble skateboard. Replacing the long car journey’s of the previous game, now you’ll be able to skate around the sights and listen to York’s movie musings as you go. Unfortunately the frame rate while in the open world is pretty dire, despite the less than spectacular graphical situation. I made sure to make liberal use of the fast travel system to compensate for this, in the form of Uber-like taxi business ‘Y-Vern’ .

It’s not just a case of simply traveling to the next mission for York though, as time management is once again a large part of the Deadly Premonition experience. Businesses will have specific opening hours and days, and you’ll sometimes spend whole days smoking and eating to pass the time. You have to manage your hunger, sleep and hygiene too, but none of these meters are particularly hard to keep topped up. It cannot be understated just how much I adored the story of Deadly Premonition 2. There are so many unexpected twists, hilarious facial expressions and memeable moments. And if ritual murder and hallucinogenic drugs aren’t enough to satiate your sick mind, there’s also a healthy dose of incest. Despite the heavy subject matter, it’s all handled surprisingly well in the goofy world of Francis York Morgan. Without spoiling any important moments, it’s worth mentioning that there are some connections to the original game for long time fans.

Another connection to the first game is in the music. While plenty of the greatest jazz hits of the original return for another blow of the sax, there’s also some great sleepy southern hits and an upbeat skating number that fit the mood perfectly. Sometimes the music eclipses the dialogue, sometimes the sound of skating eclipses everything; and while it’s not good enough, somehow I just wouldn’t have it any other way.

Deadly Premonition 2 is absolutely a worthy sequel/prequel, that still very much has the janky charm of its predecessor. The story is bonkers, the characters are outrageous, and the finale is just perfection. There are a lot of elements to the game that just shouldn’t work, but A Blessing in Disguise is the epitome of “greater than the sum of its parts”. Outside of the poor frame-rate, which is an unfortunate distraction, Deadly Premonition 2 delivers everything I could’ve wanted in the sequel to one of my favourite games of all time.

Incredible, off-the-wall story
Combat improved from the original
Retains the bizarre charm from the first game

A worthy sequel to the 2010 cult classic, Deadly Premonition 2 retains the series trademark charm with its oddball characters and outlandish story. The open world frame-rate isn't good enough, but if you can overlook that there's plenty of intrigue and laughs to be found in Le Carre.

You may also like
Deadly Premonition 2rising star games

Deadly Premonition 2 out on PC now