Dragon Quest VII: Fragments of the Forgotten Past Review 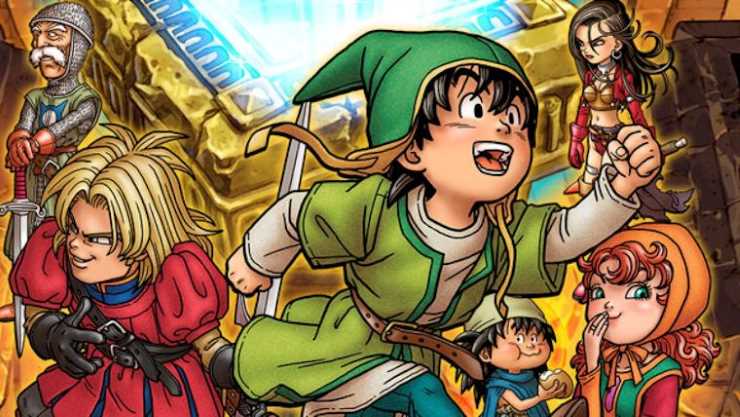 Released on Sony’s PlayStation back in 2000, Dragon Quest VII enjoyed critical and market success, selling over four million copies despite only being released in North America in the West (under the title Dragon Warrior VII). Us Europeans never got to play the game outside of importers. Then, in 2012, Square-Enix announced that they were remaking the game for the 3DS, and that this time it would be coming west. Japan got the game in 2013, and although it has been a long three years for some of us, it’s finally here.

Dragon Quest VII’s story takes place in a world where only one island exists, and while the people of that island admit it seems odd that they’re the only inhabitants of this world, they never want to question it; well, except the hero of the story and his friend Kiefer. Not being content to do what they’re told, our young yet stalwart heroes set out to find the truth behind their empty world and end up on a time-hopping adventure of epic proportions. I don’t use the that word lightly here, this game is literally epic in scale. We’re talking about an RPG where just doing the base story will take a hundred hours, but tack on sidequests and you’ll be around for considerably longer. It takes hours to take part in your first battle, and if you’ve managed to stick it out through this rather slow opening you’ll be gripped as you find new continents in the past where a grave misfortune has befallen them, and spend your time helping them out of the mess they’re in.

Finding each island’s story and solving what their problem is restores that island to the world map, giving you a much larger world to explore. Once you’ve solved the trouble in each place it’s fascinating to go back to the present day to see what has changed in the intervening years. These little sojourns are a requirement as you’ll find tablet fragments to open up new continents, but it never really grows dull, as you’ll regularly find new stories to be part of and new equipment allowing you to put up more of a fight against later enemies.

With this remake, random encounters have been dropped and instead enemies spawn into the world giving you the option to avoid them if you can prevent them from spotting you. Bizarrely, you don’t get any advantage for approaching them from behind, which seems like a glaring omission when you can control how you approach enemy fights. Also, in many dungeons the pathways are too narrow to be able to get past without instigating a battle. I know battling is an RPG’s bread and butter, but the sheer number of spawns in single areas can get rather irritating. Especially when they don’t really pose too much of a threat to you, but you can’t stop yourself from getting drawn in.

I say “not much of a threat” and I mean it; I skipped a lot of fights while wandering the overworld and still found myself not having too much trouble with bosses, let alone weaker world creatures. I may have been taken aback a bit by a couple of rather heavy attacks, but I was always able to heal my way around those efficiently.

The battle and levelling systems start off nice and simple, too, with basic commands for attacking, spells, abilities and using items, and as you level up you unlock new spells and abilities. This gets more complex by the 20th hour though, when you finally open up the job system, allowing you to bestow your party members with one of many roles to fulfil. These jobs level up separately to your characters as you beat strong foes, granting new spells and abilities to aid you in battle. Once a job has been maxed you can switch and start a new one, while retaining the abilities you already unlocked. Maxing out several of these then leads to secondary professions being unlocked, giving you even more stuff to bring the hurt to your enemies. If you’re a completionist, you’re going to be here for a really long time.

As I said in my I am Setsuna review, I like my RPGs old-skool and turn-based. I just prefer to be able to take my time with my decision-making when in battle, as well as have a mock roaming structure hiding a linear experience underneath, and Dragon Quest VII delivers that in spades. Where this gets let down though is in a rather clumsy inventory system that sees each character with their own separate allocations. There’s no shared pool, and constantly moving stuff between characters and the infinite allocation of the “Bag” slot can become frustrating as inventories tend to fill up quickly, and shopkeepers generally have to help you when you decide you want someone to have a new piece of equipment. That’s the thing with remakes: they should stay true to the original game, but you should always try and fix something that requires it – and this should have been changed for this release.

I’m also not a fan of the camera. In most dungeons it’s fixed isometrically above your group, but in the world you’re able to rotate it with the L and R buttons. There’s always an initial confusion when you move from location to location and this can sometimes result in you going back the way you came and having to wait for the transition again before you can return to what you were doing. It also feels a bit too close to the characters; I’d have liked it if it was further out, granting a wider field of vision. It just feels too claustrophobic.

Aside from that, Artepiazza has done a wonderful job remaking this. It looks great, the music is lovely and jaunty at pretty much all times, and the localisation work is great. The people of each continent have their own dialects and accents, which while initially confusing to read at times really accentuates how different each place feels compared to the last, giving each one considerable individuality considering the oft-repeated NPC models.

Dragon Quest VII is an excellent RPG only mildly let down by clinging on so vehemently to the original vision. A few changes just to improve those minor niggles would have been very welcome, but regardless of that this is brilliant work. It’s a game that’s truly epic in scale, with many mini stories that will compel you to find out what happened to every locale throughout the run time. It’s a wonderful journey through forgotten worlds, but be mindful of the sheer amount of time you’ll need to put in just to reach the end of the campaign.

Huge, sprawling adventure to get lost in
Well translated for the west
Nice old-style battle system

Accessible and incredibly deep, if you’re looking for a time-sink you won’t get much better than Dragon Quest VII.