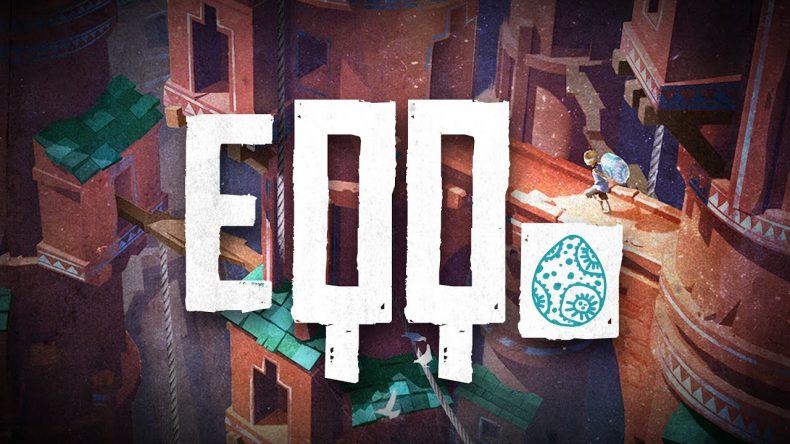 Blindness has been an element in video games for decades. Often limited to just a status effect, loss of vision is something easy to understand as a game mechanic. The idea of a blind main character, though, is very intriguing. The inability to see obviously comes with its own set of challenges, and a character unable to see the world they inhabit could make for some interesting and potentially poignant storytelling. Eqqo looks to do just that, whilst also telling the tale of the egg of a god.

You play as Eqqo’s mother, who serves as a narrator guiding Eqqo through the dream world of the game. As he is unable to see, Eqqo navigates the world by following the sound of you tapping the ground – essentially turning the game into a point and click adventure. On this journey you’ll soon meet the egg of a snake god that you call the Enkolal, and thus begins your quest to guide Eqqo and the egg safely through the world. Each stage of Eqqo is a large 3D area with different stars you can switch between to change your viewpoint. You can view an entire 360 degrees from your perspective, which is often important as it’s not easy to find the different mechanisms that can help Eqqo progress. You’ll spent the majority of the time cranking levers, telling Eqqo to put his hand in holes or throwing rocks at different objects. It’s rare that progressing in a level requires much more thought than locating a switch or two, and I rarely felt excited to tackle a new challenge in my path.

Sometimes there is a level of tension, as small creatures and towering shadow monsters all want a piece of the Enkolal’s tasty contents. Usually the way to keep the egg safe is to either rush back to it, or throw objects at the thieving creature in question. The design of the sinister main antagonist is very intimidating though. One of the problems with these tense time-critical moments is that controlling the game is unwieldy at best, using any of the control options. It becomes apparent quickly that Eqqo was designed with VR and mobile devices in mind. Touch and gyroscope controls are awkward, and using the Joy-Cons just feels too sluggish. Guiding Eqqo around is just more fiddly than it needs to be, and it definitely hurts at the game’s more critical moments.

I loved the idea of helping Eqqo past the obdtacles given the limitations his blindness places on him, but Eqqo’s sight is never really used as a game mechanic. Accidentally guide him into danger (such as a pit or enemy) and he will just stop as he approaches. It feels like the developers missed an opportunity to make Eqqo’s blindness an important part of the game, as it never feels any different to moving any character around in a point and click game.

Fortunately the storytelling uses Eqqo’s condition in much more interesting ways, and the pain in his mother’s voice as he faces his obstacles is palpaple. Eqqo faces some pretty major pitfalls on his quest, and his mother’s narration really brings out the emotion of the situations. When the story became more otherworldly, however, I found it generally less enjoyable. The world of Eqqo is really quite beautiful, with a delightful colour palette and gorgeous architecture. From ruined temples to deep blue caves, the environments you spend your time scouring are a joy to look at.

One of the few optional objectives in Eqqo involves you smashing barrels to collect the story scrolls inside. The scrolls contain two pictures that add a little extra detail to the lore of the game. Although finding the scrolls isn’t particularly important to your understanding of the game, the art is good enough that I found myself looking for the barrels and smashing them around the world.

Eqqo is a game that never really managed to grab my attention. The concept of a blind protagonist is interesting, but the uninspired puzzles and poor controls meant I never felt invested in his quest. It doesn’t matter how beautiful a world is, when spending your time there is monotonous at best.

Puzzles are very simple, and often recycled
Controls are awkward
The protagonist's is condition isn't reflected in the gameplay

A fairly uninspired puzzle game with awkward controls, the concept of Eqqo is never truly delivered. There are some emotional moments and beautiful environments, but it wasn't enough to keep me interested in the dull gameplay