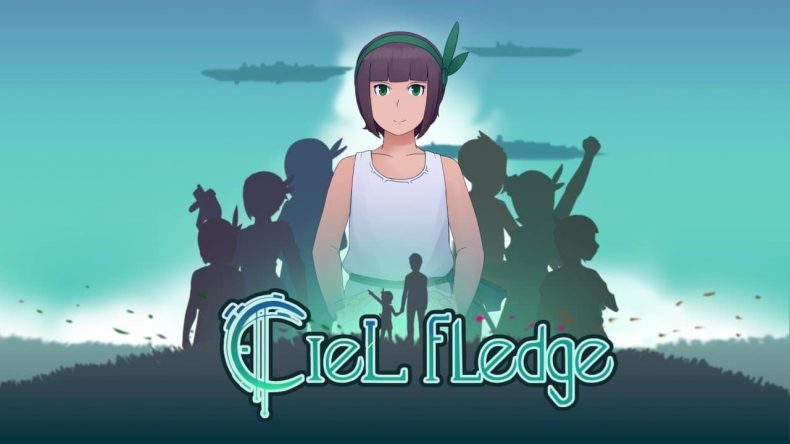 There are some activities you just don’t expect to be the focus of a game. Whether it’s guarding the borders of a dystopia in Papers Please?, or playing as a blood sucking bug in “Mr Moskeeto”, there’s no shortage of bizarre concepts in the world of video games. I’ve always been attracted to these little curios, and have spent countless hours introducing (sometimes reluctant) friends to my collection of oddities. Imagine my excitement when I heard about Ciel Fledge, a daughter-raising simulator set in the distant future.

You play as an adult living in the floating city of ARK-3 in the very specific year of 3716. The ARK’s governing body, “The Administration”, arrives at your door with a mysterious young girl found in the wreckage of the recently destroyed ARK-5, and instructs you to raise her as your own. Once you’ve named your new daughter, it’s up to you to ensure she becomes a stable adult over the course of the next 10 years. You essentially dictate every aspect of your daughter’s life. You get to set the size and cost of her meals, her pocket money, and most importantly her schedule. Each week you can decide what class, job or person she will spend each day of week investing in. This choice will decide which of her stats level up, from charisma and strength, to dance moves and language skills. If you make your daughter overdo it and she runs out of stamina however, she’ll get unwell and gain less stats from daily activities. The Administration immediately warn you about the potential punishment for raising your child incorrectly, so keeping her happy, healthy and social is key.

Balancing every aspect of your daughter’s wellbeing is pretty intense. Work her too hard and she’ll get ill, give her tasks she dislikes and she’ll get stressed, pamper her and she’ll get spoiled. Alongside this parental balancing act, you also have to manage your budget. Classes don’t come cheap, but if you spend too much time at work you and your daughter will drift apart. Life as an unexpected single parent is tough.

Once a schedule has been planned in Ciel Fledge, you’ll see a cute little chibi version of your daughter darting around the city and going to classes. As she completes her daily routine you can feed her snacks if any of her many meters start to drop low, and if you can afford them. Sometimes her daily tasks are accompanied by a little cutscenes introducing her to new friends or activities, and occasionally you’ll be expected to take part in an unexpected puzzle battle – although these engaging moments are far too uncommon for my liking. The combat in Ciel Fledge (if you want to call it that) plays like an extremely simple puzzle game. You need to match 3 of the same coloured tiles from a 3 by 3 grid, but they don’t need to be touching. This means that instead of having to think about what you’re doing, you just need to mindlessly mash colours. It costs colours to use your daughters abilities, which can do a variety of things to help you win. Each battle has its own objective, the goal of a pop quiz is to get a high score whereas appreciating art require you to get 5 matches of a certain colour. If the whole battle system was a little more fleshed out, it would be a fun distraction from the stat management.

One of the places that battle prowess is most important is on the surface world. All children must be sent down to the surface to experience its dangers there first-hand, in one of The Administration’s more barbaric initiatives. On the surface, you can bring 3 of your daughter’s friends to battle the monsters of the ruined world. If you have your daughter socialise more with her buddies, they’ll provide you with better support abilities. If your daughter is able to survive on the surface, she’ll be much stronger and might even bring some items back. Over the course of many years (in which you have to plan almost every single day’s activities) you’ll get to see the true impact of the way you’ve raised your daughter. Her height, weight, hobbies and eventual career are all directly affected by the choices you’ve made for her. The sheer scope of it all is pretty astounding, and no two daughters will ever be the same. If it wasn’t such a daunting task to spend so much time with Ciel Fledge’s fairly monotonous gameplay, your daughter’s growth would be well worth the investment.

My main issue with Ciel Fledge is how much less of the compelling aspects of the game there are compared to the dull scheduling. There’s an interesting story relating to alien conflict and the mysterious nature of your daughter’s appearance, but you’ll have to put several hours of time into the stat management to see any of it. Even the beautiful art and perfectly fitting Japanese City Pop-inspired pop aren’t enough to distract from the humdrum day to day life of a parent of the future.

Ciel Fledge is an ambitious game with a unique concept, which is dragged down by just how boring the core gameplay is. Seeing your daughter grow based on your decisions is very satisfying, but tedious scheduling and shallow combat overshadow the parental satisfaction.

An unusual concept for a game with a mixed execution. The monotony of scheduling your daughter's life unfortunately overshadows the interesting story and fantastic art direction