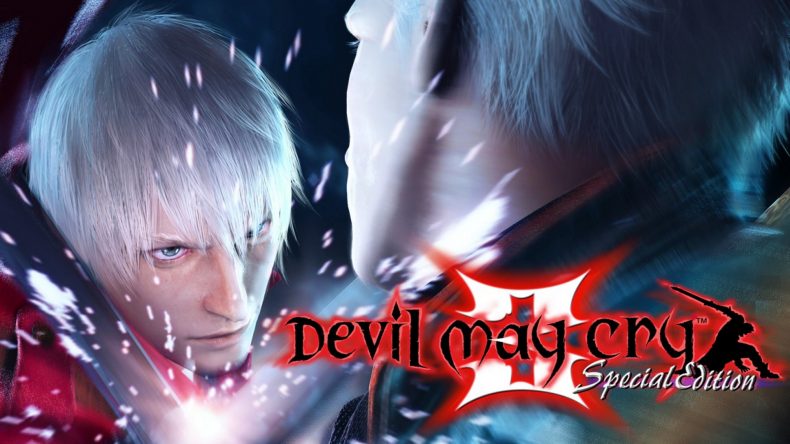 You know full well that a game has forever buried itself into your consciousness when you get a warm pang of familiarity at the blood and gore warning that precedes the action. The fact that anti-hero Dante puts his boot through the screen, leaving a pane of shattered glass certainly helps jog the memory. But straight away Devil May Cry 3: Special Edition puts you all the way back in 2005, Hideaki Itsuno’s utter classic first dropped for PlayStation 2.

Lovers of fast paced, highly technical hack and slash titles have been spoiled in the subsequent generations since Dante’s Awakening arrived, but revisiting it today shows what a vital touchstone it is for the genre, and that it still plays like an absolute dream. It speaks volumes that picking it up again evokes not only this warm nostalgia, but also the latter day works of PlatinumGames or Ninja Theory that were so obviously influenced by what occurs here. Serving as a storyline prequel to the first Devil May Cry, the plot tells the tale of the dysfunctional relationship between Dante and his brother Vergil as they seek to expel a new threat within the demonic world, all based inside an enormous, arcane, Lovecraftian tower that suddenly erupts from the bowels of hell. There is nothing too intellectually troubling about any of this, but it is steeped in gung-ho rock and roll charisma and helped immensely by Dante’s series of wise-ass quips, which come thick and fast from the very first, pizza-chomping cutscene.

Gameplay is broken down into a series of missions, with a scoring system based upon time taken, in-game collectible orbs snaffled, damage taken, but most importantly style. Combos and evasion are the two most important things in DMC3, as the meter that gauges your combinations is reset back to the start each time you sustain a hit. What this means is that whilst you can happily whiz through the game without worrying about your grades, the real pleasure comes from mastering each level, attaining an S-Rank, and reaping the rewards in both orbs and sweet, sweet gaming smug satisfaction. This of course means that the Switch is ideal for either a quick pick up and play bit of demon carnage on the toilet, or a longer spell docked to the TV. The visuals, whilst still obviously of their era, have been given a HD-spruce up, so it looks ace in either, evoking memories of the superb Resi 4 HD re-release from a few years back. With four distinct fighting styles available from the off, eventually expanding to six, a plethora of melee and ballistic weapons, state-altering Devil Trigger specials and a balletic catalog of moves, there is a huge amount to the white haired Trickster’s arsenal. Factor in a playable-from-the-off Vergil, who himself has completely different weaponry (but sadly no exclusive cutscenes) and the fact that the Switch version allows you to swap both weapons and fighting styles on the fly, you have a lot to learn and can have a lot of fun doing it.

If you wish, you can stick to the original rules of only being able to switch styles between missions or when you encounter an in-game statue, but why would you want this when you can be as flashy and string up to six together in one battle? The new combat mechanics bring the game more in-line with the modern DMC sequels, and have been implemented seamlessly. There are many missions, many bonkers demonic bosses to cut from neck to guts, and a nice difficulty curve that eases you in and then forces you to learn how to play the game properly. It is not an easy game; we knew this back in the day when the O.G. turned up in the West with the Japanese “Hard” mode as its baseline configuration. But the rewards are great, as progression just means your moveset and tools of the trade can be leveled up and in turn get even more powerful, insane, and fun. It’s a truly special, landmark title, that is just as thrilling and grin-inducingly great as you remembered.

Crucially, all of the new additions manage to improve upon latent brilliance. The survival Bloody Palace mode returns from old, but the Switch version now allows local co-op with any configuration of Joy-Con or Pro Controllers, and it is an absolute blast. If you haven’t played DMC3 before, there has never been a better time to bask in its majesty. If you are a past master, then this is a wonderful update that improves on one of Capcom’s finest ever outings. Its so good, that you will find yourself forgetting that it is fifteen years old, and first appeared on a console that didn’t even have an HDMI port.

One of the best HD remakes you will find, with worthy additions to an already great game.