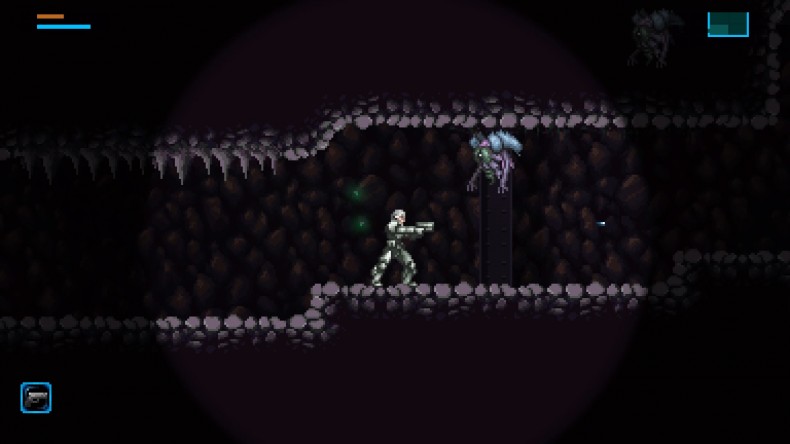 Over the last few years there have been hundreds of games released that claim to be retro or old school, but few of them actually have the content to back up that claim. Most will appear to be old school but come with many modern conveniences and few actually go all the way. Exile’s End from Magnetic Realms is a true old school sci-fi Metroidvania game – in both good and bad ways.

Exile’s End’s premise reminded me of VVVVVV in a lot of ways. You start out alone on a planet after everyone in the crew has been spread out on a mission, and everyone escapes the ship in pods when things take a turn for the worst. You have no power-ups or weapons and your suit power is low. This method of creating difficulty by restriction is something not many games get right. Most games released today don’t rely on you actually trying to move the camera down by holding and waiting a few seconds, and this is something I picked up on immediately. I’m used to doing this, but many modern gamers probably won’t be and this is will end in frustration. Exile’s End’s opening is too old school for its own good: you initially take a lot of fall damage and have to navigate through multiple screens of areas with just a few rocks until you actually get a power-up that disables fall damage. I feel like the addition of a proper weapon initially would have made the opening much more palatable.

The old school aesthetic extends to how cutscenes are shown off as well, and I couldn’t keep track of how many times I was reminded of the SNES era design and even early PC games in the 90s with Exile’s End. Power through the opening and you will get a proper old school Metroidvania game that is worth experiencing. The visual and audio design is really true to the era Exile’s End is going for. It isn’t as polished as, say, Axiom Verge, but I really like some of the things the developers added to take you back to a simpler time. There’s a CRT filter akin to what Retro City Rampage has with intensity options that I turned all the way up, of course. The sound effects really shine while the music is a tad disappointing. I can’t imagine myself listening to the music outside the game and I enjoy doing that with most games I play.

Exile’s End is absolutely worth playing if you’re looking for an old school game that pulls no punches. I wish the opening section was a little more forgiving because most people will probably drop it without powering through to reach the fun part. I hope the developers consider tweaking the opening area and even allowing for manual saving instead of the auto save system in a patch.

Exile’s End is a true old school Metroidvania experience in both good and bad ways that will ring your nostalgia bells while pulling no punches with the gameplay.