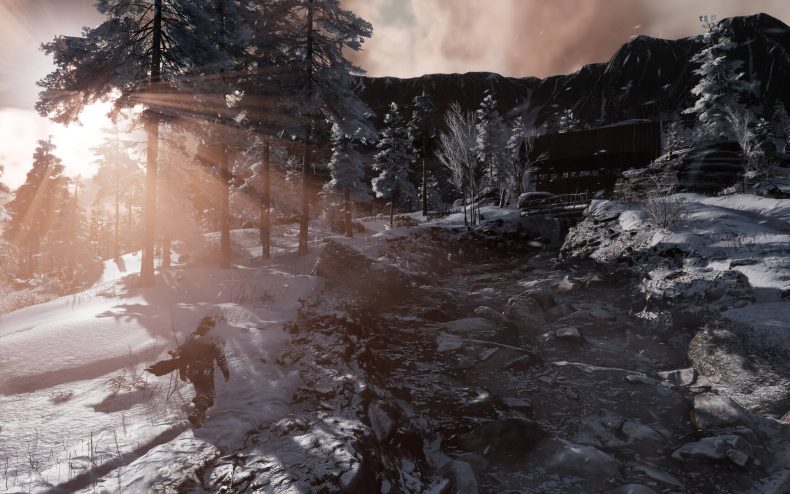 If you’re anything like me, you probably hadn’t heard of Fade to Silence until now. It’s a game that really has come in under the radar, and even watching a trailer won’t give away what this game actually is. In short, Fade to Silence is a survival adventure, with minor roguelike elements. The long version is a little more complicated.

The world appears to be have been lost, a mysterious corruption spreading throughout the land and a never-ending winter plagues the few remaining survivors. On top of that, the “Eclipse” hovers overhead, a huge reminder that you are not welcome in this new world as it rains down destruction whenever the mass of corruption floats by. Adding to all this, there’s a wraith following you around, the voice of the corruption that mocks and berates you at every turn. Indeed, the very first thing it says to you is, “dead again.”

Fade to Silence begins with you awakening in a dark cave, the disembodied voice of the corruption warning that death watches you. You grab a torch that burns in an adjoining room, before returning to the cave exit that is blocked by the frozen and twisted remains of eldritch creatures that reach out with icy claws. An extremely brief tutorial, too brief really, sees you smash your way out of the cave to find the corruption has destroyed and reclaimed what was once your home. All that remains is a few broken buildings and, more importantly, the lone figure of your daughter. Fighting your way through the corrupted creatures using a combat system not dissimilar to Lords of the Fallen, you’ll cleanse the area with some unexplained ability, leaving the beginnings of a new camp and the potential of a safe haven for other survivors. Funnily enough, survival and the unexplained are essentially the two things that sum up my time with Fade to Silence.

The survival genre has grown by quite some margin over the last few years, but the one constant appears to be a lack of explanation of mechanics. This is a problem, albeit by varying degrees depending on each game, but Fade to Silence’s opening hours are a bit overwhelming as a result of this lack of direction. You do have a survival guide in your menu, but it’s all a little bit counter-intuitive. Having to resort to a menu all the time just feels like a poor way to introduce your players to essential game mechanics.

There are also a few too many things that you need to consider as you make your way out into the snowy wilds of this world, to gather supplies and explore this intriguing setting. Firstly, you have to keep yourself warm by keeping your torch burning, which is a feat in itself due to how quickly it burns out and requires constant crafting of new ones. Your maximum health will take a hit over time, with frost creeping into the top end of your health bar, if you aren’t careful. Actually, even if you are careful, your maximum health will always take a temporary hit, which feels a little harsh in a game that’s already determined to kill you. You also need to keep yourself fed, usually through crafting a bow and hunting animals, as long as you have the inventory space left to carry their carved-up remains. You’ll only be able to create food at camp fires however, which need to be kept burning through gathering firewood, and this is where things get a little more complicated as time goes on. As well as your young daughter, who you have to leave behind whenever you venture out, you will find survivors out in the wilderness and have to make the decision to either part ways or invite them to stay in your camp. If they stay with you, you will need to make sure that food and supplies are available at your home too. However, if you have claimed a hunting zone by taking down an animal there, or if you have claimed a wooded area by chopping down a tree there, your followers will attempt to bring in supplies from those areas when they can. This means that people will remain fed and your camp’s fire will continue to burn. It’s a lot to think about when you’re trying to stay alive, but it does add an interesting layer of depth for those wanting more than just another survival game.

This really is more than just another survival game, too. Once your community grows, if you do manage to find survivors at least, you can construct additional buildings at your home camp and send your followers out to hunt, gather supplies or even to create new items for you and your companions. Again however, this is just another feature of the game that isn’t really explained and I found myself basically messing around with construction, not really knowing what I was doing. Despite all this, I’ve found Fade to Silence strangely compelling. Its decimated, frozen world filled with corruption, the moon-like Eclipse that floats overhead at all times, the little glimpses of the main character’s backstory that are teased during periods of rest. I wanted to know more about why I could remove corruption and how it must affect my character somehow. I found myself enjoying the combat, despite its awkwardness, and how it wasn’t always necessary. Indeed, it’s often the best strategy to steer clear of the eldritch creatures whenever you can, as everything in the world seems to be finite, including healing items and the ingredients needed to craft them.

Your life is also finite, which is where the roguelike elements begin to creep in. As you play, you’ll collect crystals that will all add up to offer boons in your next adventure, should you die. These should help you get started in that next life, but lives are at a premium and permadeath beckons, should you run out of those lives. To balance this out, Black Forest Games has also included an easier mode that reduces all the various effects and gives you infinite lives, albeit with the drawback of removing the boons and switching off Achievements/Trophies. Some may bemoan this, but it makes sense, much in the same way Minecraft blocks Achievements when played in Creative mode.

If you’re looking for an adventure with a bit of an extra challenge and you don’t mind putting in the work to figure out how to do everything, or perhaps just want a bit of a harsh survival game with a lot of depth and lore, then Fade to Silence will tick a lot of boxes. It comes with a few issues, like being unable to equip a torch for some reason, or story missions forcing you to stay outside when you really need to find shelter from a blizzard, but there’s just something quite playable about this one. Though many might find it a bit too overwhelming. I sure did.

Fade to Silence takes a lot to get into and it’s very rough around the edges, but there’s still something compelling about its world and fans of survival games will have plenty to do. Perhaps a bit too much.