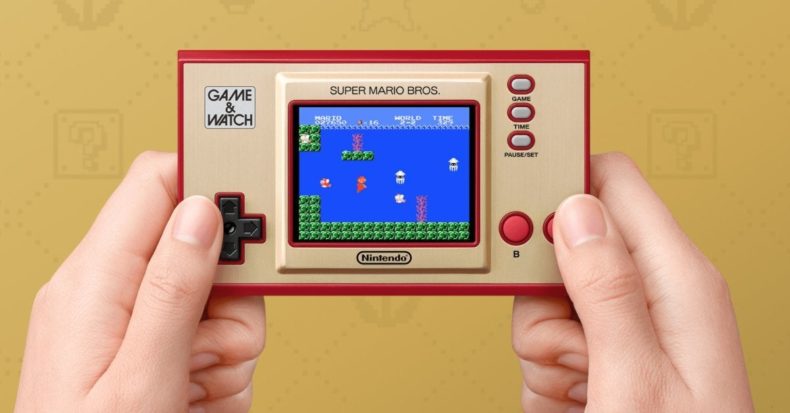 Nintendo is well-known for poking us with the nostalgia stick, time and again releasing old content in different ways. Even recently we’ve had Super Mario 3D All-Stars collection on Nintendo Switch and all been duking it out online on Super Mario Bros. 35. Another part of their celebration of 35 years of everyone’s favourite plumber is the physical release of the Game & Watch: Super Mario Bros. aimed once again at scratching that nostalgia itch.

The original Game and Watch, released back in 1980, has had a bit of an overhaul for this new version. Not least inclusion of a D-Pad to use alongside the infamous A and B buttons, a vibrant colour screen and everything finished in an alluring gold tinge. Now, bearing more than a passing resemblance to a Famicom controller, and with USB-C charging functionality, this certainly isn’t just a re-release of Nintendo’s first foray into the handheld market. 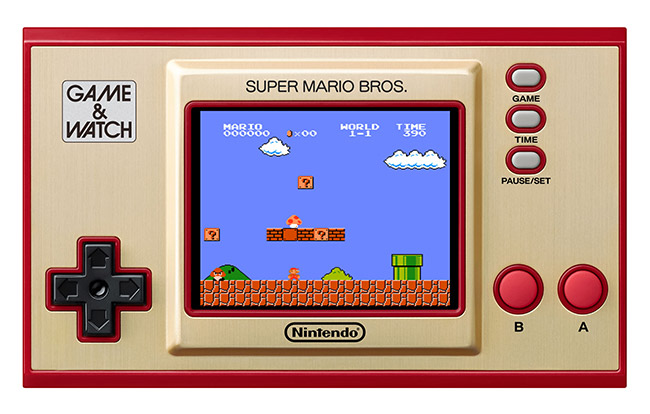 Now, there’s probably not a lot left to say regarding Mario’s first adventure rescuing Princess Peach from Bowser. You kind of know what you’re getting here. The colour-screen of the Game & Watch though comes into great effect looking bright and vibrant and still looking super sharp despite its compact size. The traditional D-Pad and two-button controls work as you’d expect and movement and jumping feels as smooth as it did 35 years ago. The only difference here is the compact size of the Game and Watch does make it feel a little less comfortable to hold, especially with my large hands. It’s not a huge problem and there’s still precise control here, but is notable compared to other controllers or the larger controls of say the Nintendo Switch.

The Lost Levels version will likely still be familiar to most, but is perhaps more likely to be new to more people. Especially if you’ve not downloaded Super Mario All-Stars on the Super NES as part of the Nintendo Switch Online service. The difficulty is definitely ramped up even from the opening levels, and provides a new level of challenge to those who find the original game a little on the easy side in 2020. The Ball game from the original Game & Watch is also an option to play and retains its black-and-white palette and simple charm. Now controlled simply with D-Pad it does get repetitive and certainly feels simplistic compared to the other game. Its place here is clearly for nostalgia purposes, and in short sharp bursts, it is still engaging to play. 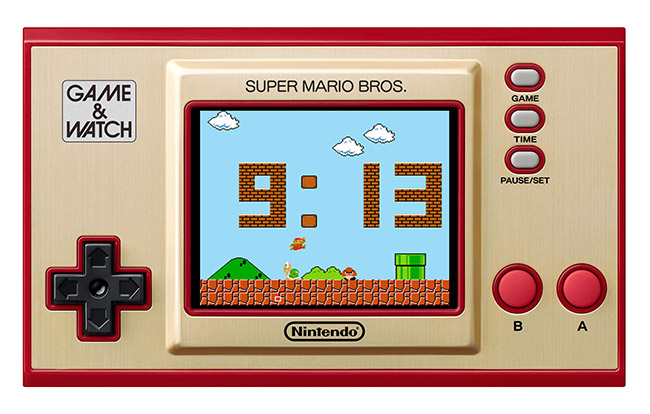 In terms of the “Watch” part of the package, the clock timer that you set at the start ticks over merrily. The difference with this version is the clock is set in a Mushroom Kingdom backdrop, and you can manipulate what appears in the background between three different themes with a press of the “Time” button. Over time, Mario will continuously move from left to right and encounter various enemies and challenges to overcome. Some real attention to detail has gone into this, such as Mario waiting under the 1 and 9 blocks at 19 minutes past the hour, and then bops them from underneath to destroy them, to allow a 2 and 0 to drop just on the turn of 20 past.

The battery life seems to hold up very well, with a simple USB-C to USB charge cable provided for whenever you need to top up the battery. It has a standard rest time of about 3 minutes, where it will shut off to conserve battery power, but a simple press of the Power button brings everything back instantly, meaning you can resume a game where you left off. You can also pause any game and go into another at will meaning you can have saves of all three on the go and chop and change as the mood takes you.

The Game & Watch: Super Mario Bros. is a decent piece of kit that oozes that classic Nintendo old-school charm. The games on it are well designed and controlled well, and the colour screen presents everything well. The portability and small size make it great for on the go too. At £45 it is a little on the pricey side, but it feels well-made and substantial enough to justify it. The older Nintendo fans will adore the content too, making it an ideal Christmas present for the Nintendo lover in your family. There are certainly worse ways to let the Xmas turkey settle before your next mince pie.