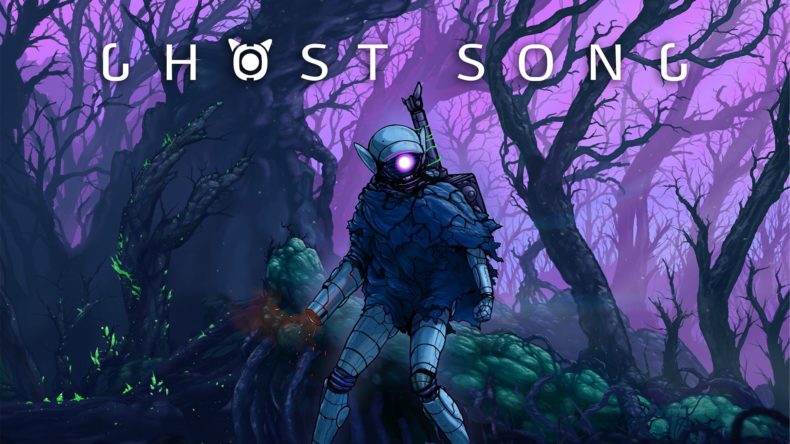 There aren’t a lot of video game genres I struggle to click with, but Souls-likes have eluded me for over a decade. The slower paced combat and poorly explained systems do nothing but frustrate me, and I really wish this wasn’t the case. I want to wax lyrical about Dark Souls and Elden Ring like my peers, but at the time of writing I struggle to see the appeal. One Humble game may be the first step toward me seeing the light, and that’s the MetroidVania with a sprinkling of Souls known as Ghost Song.

In a dark and foreboding alien planet, our protagonist Deadsuit wakes up with absolutely zero memories. With nothing to do but explore the moon known as Lorian, she sets off on a dangerous mission of self discovery and makes a few friends along the way.

The first thing you’ll notice when playing Ghost Song is just how lonely and intimidating the world is. I’m not sure a world has ever felt more alien to me than this one, and once you start to stumble across some of the nightmarish monster designs you’ll actually be nervous about what’s around the next corner. 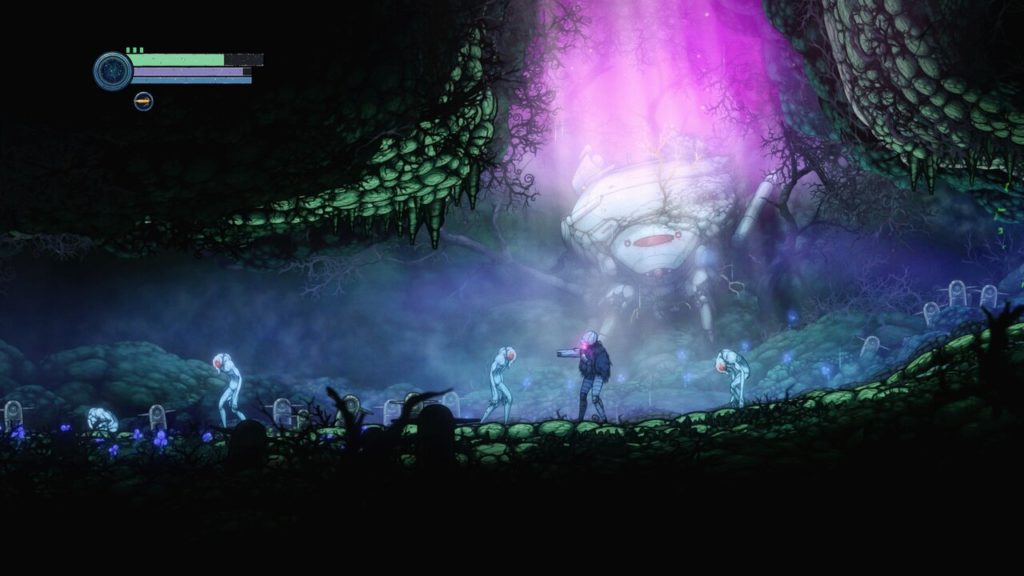 Deadsuit is armed with a few weapons to deal with the horrific creatures lurking on the moon though, with a blaster and a melee attack. Your firearm works similarly to Samus’ beam cannon, with the ability to hold down a shoulder button to target more directly when needed. What’s really cool about your weapons though is how they interact with each other. You see the blaster overheats after prolonged use, but when this happens the heat of it provides a damage boost to any melee attacks. This means you’re encouraged to switch between the two regularly to maximise damage, adding an interesting twist to the combat.

Of course I already mentioned that this is a MetroidVania, so your equipment will be changing drastically throughout Ghost Song. All the staples are here, from air dashes to double jumps, alongside powerful new weapons like a rocket launcher that breaks walls lined with red eggs. By the end of the game Deadsuit will barely resemble the struggling survivor you started as, and you’ll be taking on all manner of nasties with ease.

Okay that may be a bit of a stretch, because Ghost Song is a tough game. The bosses especially are absolutely brutal, requiring you to learn each one’s attack pattern and make the most of the small window of invincibility your dash brings. Every single one of these encounters is a delight though, and really got my heart pumping as I desperately tried to take them down. 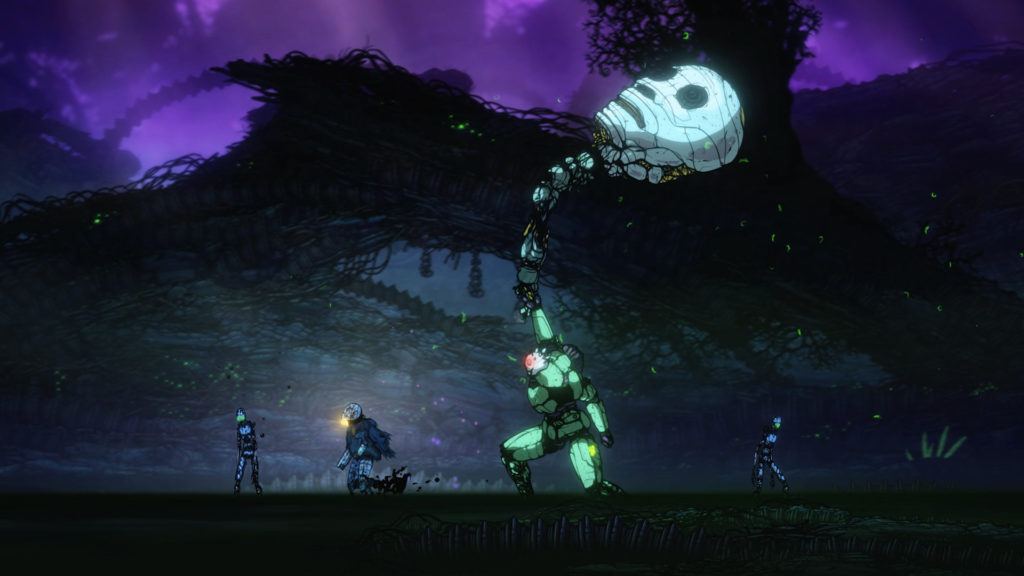 Incredible bosses are nowhere near the only similarity to the Souls games here. Everything from the deliberately slower movement of Deadsuit to collecting “souls” and levelling up is reminiscent of the FromSoftware megahits, and these elements add so much to the game. The one thing Ghost Song doesn’t take from the genre though is the confusion of upgrading your character. There are only three stats to put your upgrade points into, and they are all explained simply with a line of text. One option boosts your blaster damage, one your melee and the other increases the metre you use the special abilities. It’s a simple system, but one you’ll have to think carefully about before pumping your currency into it.

Alongside all the horrendous monsters you encounter on your adventure, you’ll also meet other wandering survivors. These colourful characters are more often than not behaving a bit oddly when you first meet them, struggling with their own fates and confused about who our hero is. After a while though you’ll learn to love these NPCs, and there were some I really emotionally resonated with. From the android who suddenly developed consciousness to the inventor girl with zero self confidence, all of the characters you meet have a backstory and a personality that always made me happy to bump into them in a dank cave.

Once you’ve explored a little you’ll discover a camp of NPCs trying to repair their ship to escape the moon, and agree to help them. This mission takes up a lot of Ghost Song, and sees you finding ship parts strewn across the map and bringing them back. What’s really cool about this though is what happens when you have a ship part in your inventory. The first time you make your way past a brutal boss and grab a ship part there’s a huge sense of relief that you’ve made it past the games’ toughest obstacles and progressed forward in your mission. But neither life nor Ghost Song are that easy, because when you’re carrying a ship part ancient machines come to life and will stop at nothing to take you down. The pure panic I had as I tried to cling on to my last sliver of health and make it to camp was something I haven’t felt while playing a video game in some time, and after catching my breath I couldn’t wait to do it all over again. 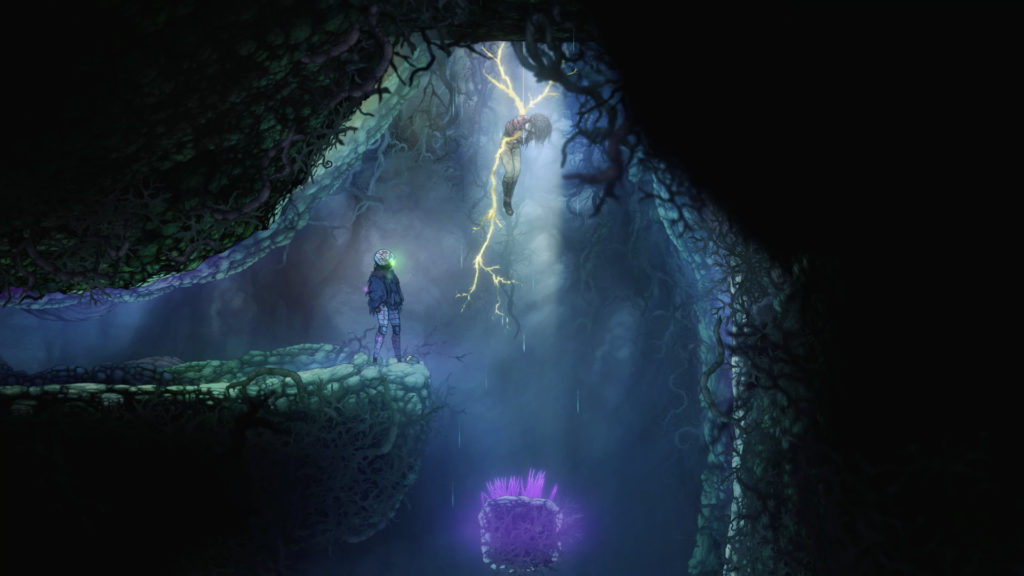 There are other aspects of Ghost Song I could talk about like the different smaller power ups you can equip and the specific beautifully haunting monsters you meet, but to reveal more about this magical game would do anyone who might play it a disservice. Part of the joy of this game is discovering what lurks in the sinister world yourself, and nobody should be denied that privilege.

Ghost Song is a masterfully crafted game, which combines all the best elements of Metroid and Souls games to create an experience that simply must be played. There are emotional moments with the characters that genuinely brought tears to my eyes, terrifying monsters that made me want to stop playing, and boss fights that pushed me to my limits. I loved every minute of my time with Ghost Song, and urge anyone reading to make time for it as soon as possible. You won’t regret it.

Will be too tough for some

Ghost Song is a fantastic game that blends Metroid and Dark Souls to create an experience that’s tense, touching and tough to put down.