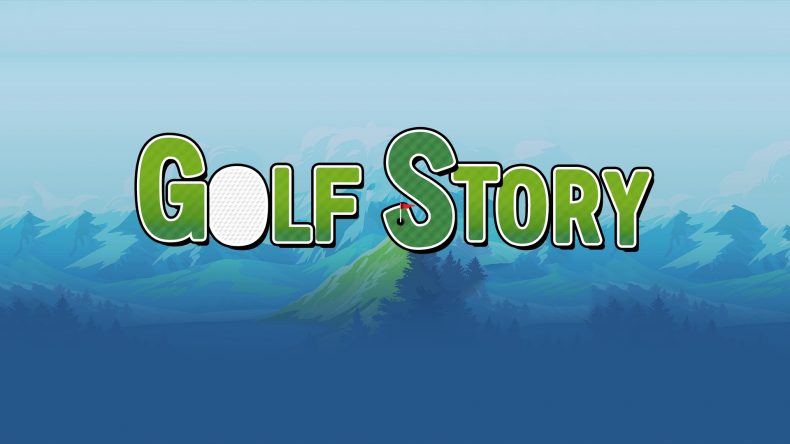 Most of us have played an RPG at some point in our lives, they take on a lot of different forms, but most of the time you’ll play some unruly upstart that through a series of misfortunes embarks on an epic quest where they eventually save the world. Golf Story follows a similar arc, just without the oh-so-lofty ambitions.

Here you play as a guy who has run away from all of his responsibilities to turn pro at golf and now he has to work his way up from the bottom goffering for decidedly dodgy individuals to schmoozing with some OAPs so he can attend their qualifying tournament. You’ll find yourself playing on a series of fantastical courses, featuring graveyards, dinosaur bones, mountains and snow covered peaks that’re nicely varied and all contain a series of secrets to find. This part of Golf Story is very nice, as you’ll find yourself running around fulfilling quests although at times what you need to do can be hard to decipher, especially considering the pixel art style can make it difficult to actually tell what certain items are, and what can and cannot be interacted with. Completing quests grants you experience points and cash, the latter of which will primarily be used to purchase new equipment not that there’s anything really wrong with the set you actually start with. Levelling up allows you to improve your stats incrementally meaning that new equipment isn’t really a requirement to get anywhere, but I did it anyway so I didn’t have to put up with ‘Wellworn Irons’ in my equipment bag. You’ll spend the majority of your time taking part in golf themed quests such as ‘hit the area’, or you’ll take part in impromptu rounds against someone or with a partner, the latter of which can be annoying as your partner handicaps you terribly, meaning you need to play out of your skin to stand a hope of winning, one particularly good quest will see you having to eradicate an army of undead skeletons, but it’s a shame that outside of the matchplay quests the ‘hit the area’ challenges are the ones you’ll be taking part in the most.

The reasoning for this is the game wants you to play golf while thinking outside the box, it doesn’t want you to play the safe and sensible way (despite one area practically insisting on it), the game goes out of its way to teach you about the pros and cons of all the different playing surfaces encouraging experimentation rather than routine. While this is very welcome it doesn’t really mask the inadequacy of the golf element of the game. I’m aware that this isn’t meant to be a simulation of the sport but things on the courses aren’t really communicated all that well. Your club distance is shown via a marker, and a number on the screen, but you’ll always hit it longer for some reason, when avoiding hazards I always found myself using precision mode to pull my shot short, but also then hitting A before the marker to pull it even shorter because of how much the balls can run for.

So, I’ve mentioned precision mode, which takes place in three different ways, you can hold L to bring your shot right in so you don’t hit it too far, R will bring it in but not as much as L does, the upshot of these is that when you start the swing mechanic (a standard three-click system beloved of many a golf game) the marker moves a lot slower, making it easier to hit the ideal points. You can also use Y to tailor your distance manually, although this doesn’t grant the slower marker. So for the most part the actual golf is simplified to the point where you’ll find it easy to get decent rounds in, but it’s all about experimentation to avoid the sneakier hazards like Cheekybeak birds and molerats. If reports are anything to go by, the game also has a smattering of bugs, but although I haven’t experienced any of these the game did crash on me on four occasions, normally when I was talking to someone. I’d be mid conversation, and then the speech bubbles would just stop, the characters would still be doing their little bob up and down animation, but everything else was locked, thankfully the game auto-saves frequently and load times are short, so quick restarts sorted it out.

Golf Story is fairly quaint, and a nice change for the RPG genre, and golf games in general. It’s not really a sterling performer in the golf stakes, but it’s easily better than the NEO-GEO game that was released at the Switch’s launch, and there is a mode for you to play a quick round should you wish. You’ll more than likely play for the story, and after that the occasional round with friends, but you won’t really go back and play it often like you would with a dedicated golf game.

Fun, quaint and a bit buggy, Golf Story is a lovely but flawed distraction.