Hell is Other Demons review 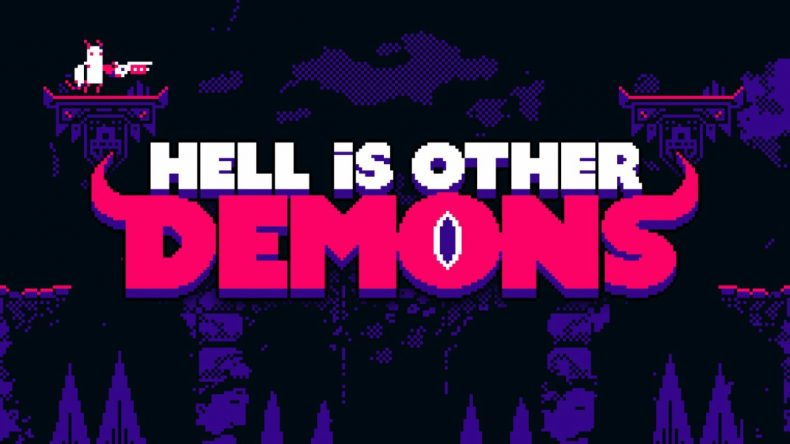 The proverb that best sums up Hell is Other Demons is “practice makes perfect”. A solid maxim for life in general really, but incredibly relevant to this particular arcade shooter from indie developer Cuddle Monster Games. True, most games could rightly make a similar claim as players improve and learn the mechanics over time, but unlike titles that have clearly inspired this game, Hell is Other Demons doesn’t adopt a rogue-like approach and instead sticks to pre-set waves of enemies whose sole purpose is to reduce your health bar as quickly as possible. And the result is a fun and addictive shooter where you’re constantly making progress, even through failure.

The premise will sound familiar: it’s a 2D adventure in which you’re tasked to fight off swarms of monsters that appear over time by either stomping on their heads enough times like an old-school plumber, or by hitting them with enough beams from your weapon that they disintegrate into nothingness. Well, not quite nothingness as destroyed enemies will drop gems which, as long as you are not shooting, will be drawn to you if you’re close enough. These act as currency to unlock and purchase extras along your journey. You have a couple of other tricks up your sleeve, with a double-jump and a float ability to maintain an aerial presence to keep your stomping options open, as well as a dash move which can double up as either a dodge move or a way of traversing the screen in a more horizontal fashion. The action takes place across two different game modes which are completely separate from each other and offer quite different experiences. The first is Campaign mode which breaks the play up into different levels, each of which is made up of pre-set waves of enemies. You complete each level by clearing all of the waves before your health is diminished, with success opening up the next level on the overworld map. In this mode accumulated gems are kept after each level – whether your die or are successful – and can be spent at various shops dotted across the overworld, most often locked behind other levels. At shops you can purchase new weapons, buffs and even different Ultimate abilities which are one-off attacks that normally cause significant damage to a wide area of the screen. Each weapon and buff has a cost to equip, meaning you have to be selective about your loadout, as you only have a set number of spaces. More of these can also be purchased, but their price increases exponentially so you can’t be too extravagant without significant time spent collecting gems.

The levels in the Campaign mode are a big plus to the game as they’re packed with much more variety than you might expect. While some of their differences are just in the arrangements of platforms and enemies, other levels will introduce different hazards, like poisonous slime which spurts from pipes creating additional obstacles, or levels that are set up without a floor, forcing you to bounce from one enemy to another to stay alive and survive the various enemy waves. They force you to think and fight differently each time to figure out the best approach both in terms of your loadout and how to overcome specific waves of enemies and their positions. The beauty of the levels being fixed and not random rewards repetition, planning and practice. You can learn what works and what doesn’t in certain situations, and use that to your advantage.

And the nature of acquiring gems after each level, even if you fail, means you always feel like the time was well spent. Accumulated gems could be used to unlock a new weapon that could make all the difference to a level giving you some trouble, or a buff or ability that could finally tip the scales in your favour and allow you to progress. As well as normal levels, there are also a few boss levels interspersed which offer new challenges as almost screen-filling behemoths are now after your life bar, as well as the usual frustrating minions on standby to ruin you in the mean time. The other mode available to you is Arcade mode, which acts as an endless run mode, seeing you pick a particular demon to play as, each with a different starting loadout, and see how many enemies you can destroy before you go the same way. You can acquire different weapons and buffs that allow you try out particular combinations on the fly before you’ve maybe unlocked them in Campaign mode. The problem is, with the fast-paced action on screen sometimes it isn’t clear what you’ve picked up, and there’s nothing worse than getting a completely new weapon that doesn’t suit the rhythm you’ve gotten into. As with Campaign mode the gems are maintained on death, but these are spent a bit like XP to automatically unlock new colour schemes to adopt or new starting characters to try out and see if their style suits you better.

Both modes are noticeably challenging, but never to a point that is frustrating or feels unfair. With weapons, a stomp and a dash, there’s always something you can do to overcome a particular enemy or obstacle. Sure, it may be wise to re-map some of the button commands to make their accessibility feel more comfortable in the heat of the moment, but this is simple enough to do from the Options menu. The difficulty therefore comes from building up the appropriate reactions quick enough to stay alive with the frantic action going on. And this coupled with the enjoyable, beat-driven soundtrack will see you pushing that Retry button more often than not, to enjoy another wave of merciless enemy hordes.

The game isn’t without its frustrations though, such as in Campaign mode having to beat certain levels to move on in the overworld can stunt your progress, and a particular early level with multiple wizard skeletons (which can officially do one, by the way!) right at the end of the final wave caused me no end of trouble. Similar random difficulty spikes also exist between levels, with some seeming simple and others then ramped up in difficulty. There’s also some noticeable performance issues on Switch, particularly when docked, that sometimes cause lag, meaning your character could dart around a bit, or making it difficult to dodge incoming enemies at times. It was only infrequently this happened, but it made it more frustrating when it did and I died as a result. But all in all, Hell is Other Demons is definitely worthy of your attention. It takes clear inspiration from games like Super Meat Boy and Downwell, and at times feels worthy of their company. Its level of difficulty presents a level of acceptable but accessible challenge, and the pre-set levels, and banking your gem currency always makes you feel a bit of a success even in failure. Every death is a step closer to a new weapon unlock, or learning enemy spawn patterns and movements. It’s not without its flaws, but there’s enough here to keep you hooked and smiling as you hit the Retry button again, practising that bit more, in your reach for perfection.

Hell is Other Demons is an addictive title that rewards the time you put into it. A decent amount of content and difficulty make it well worth considering.