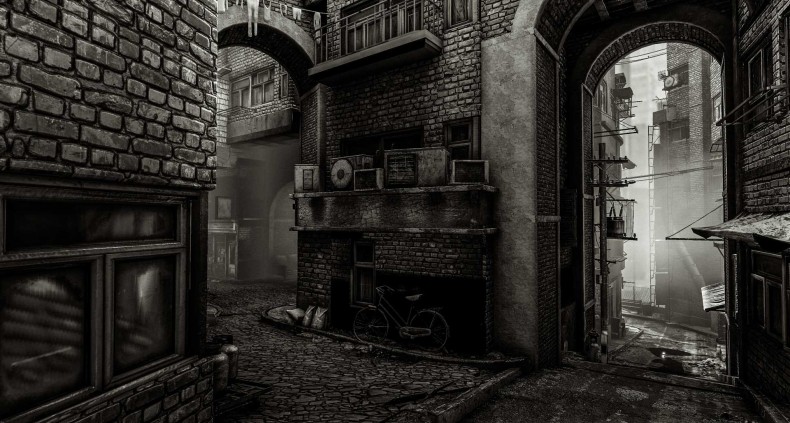 One of the problems with reviewing PSVR games in these first days after its release is that absolutely everything you play on it, at some point, makes you want to scream with joy. The technology is so exciting, the level of immersion so fresh and invigorating, that it’s hard not to get carried away, to rant and rave about games that, without the VR factor, might not really be very good at all.

And so it is with Here They Lie, a psychological horror game from Tangentlemen that starts off promisingly but ultimately never succeeds in being any more than a pretty unpolished tech demo.

The opening moments see you moving through the burning, warped carriages of a demented subway train which finally comes to stop at a wonderfully detailed, post-apocalyptic train station. Luggage and possessions have been discarded all around and a quick glance at an old newspaper informs us that some cataclysmic event has taken place. It’s an absorbing opening and as you wander out and up the steps into the city above ground you can’t help but be awed by the scale of this labyrinthine setting. Inside your VR helmet the nonsensical, nightmare landscape curves and snakes all around you, its blackened buildings tower above your head as you venture downwards, always downwards, towards whatever truth lies at the heart of this story. The problems with Here They Lie begin with its controls. Instead of allowing you to change direction smoothly by holding the right stick to move the camera, the game uses an odd shutter effect as you change direction, the screen going dark momentarily as it redirects you. This, I’m sure, is an attempt to diminish the effects of motion sickness, but it only serves to make movement feel disjointed. You can change direction by turning your head but this is slow and strains your neck unless you bump the camera sensitivity up full blast. Worse, you’ll still suffer headaches due to the blurred surfaces and pixelated edges that make up the mostly monochromatic environments you’ll spend your time in. In fact, each chapter of the game ends with instruction to take a break before playing on and it’s the only PSVR game I’ve played so far where a half hour at a time was enough to make me a little uncomfortable.

Having said all of this, Here They Lie is capable of some jaw-dropping moments and treats the player to a number of absorbing sequences over its three hour running time, one notable example being a psychedelic gondola ride late in the game which feels like your very own private space odyssey. However, the vast majority of your time here is spent navigating an increasingly complex maze of muddy surfaces populated by whining, animal-headed goons.

This brings us on to the game’s interactions, or lack thereof. Combat is non-existent as your character has access only to a torch, which wouldn’t be a bad thing if Tangentlemen made something of the mechanic, instead you’ll find yourself using it only to light your way in dark spots. You’ll also collect a frankly ludicrous amount of batteries for it. Beyond waving your torch around, you’ll find glowing boxes and drawers containing photographs which are accompanied by audio clips discussing such topics as the pointlessness of existence, the meaning and nature of consciousness and the importance of art. These little audio logs, alongside the odd phone call from a mystery friend, try to create a tense, hopeless, apocalyptic atmosphere, but the fact is they’re just not very interesting to listen to, lack depth, feel disjointed and don’t really mean anything in relation to what you’re seeing or experiencing moment to moment in the game.

The other main mechanic here is stealth. I say stealth but really all you’re doing here is walking or running past hostiles when they have their back to you, no matter how close they are they won’t notice if they can’t see you. Other enemies will only attack if you look at them, which does create a uniquely tense situation that could have been really interesting had it been explored in more depth, but it’s used briefly once or twice then forgotten about. As I’ve mentioned already, there are moments of beauty and colour towards the end of the game that really do impress, however they are somewhat offset by moments of desperate tackiness, including an extended jaunt through a red light district where animal-headed NPCs have sex with televisions and gyrate against each other whilst babbling and smearing themselves in blood. It’s not in the least bit unsettling, which, given how immersed in the world you are due to the tech, speaks volumes for how misjudged a lot of the “horror” is here.

Things pick up slightly towards the end with the introduction of some more colour to the palette, and choices you’ve made in one or two NPC encounters early on even seem to play into how things finish, which gives the game some replay value if you really want to sit through it for a second time.

As an early purchase for your brand new VR machine, Here They Lie will impress in places, and for £16 it’s not a bad demonstration of the worlds that await inside that new headset of yours. Get your mates round to have a go and they’ll doubtless be impressed with a few minutes walking around its nightmarish corridors. However, there isn’t really much to recommend beyond this. As a horror game it fails, lacks any real interaction and doesn’t end up saying anything remotely interesting for itself come the ending.

Some impressive sequences give a glimpse of the possibilities of PSVR

Horror elements are overcooked and, alongside seriously limited interactions, lead to a game that’s not half as frightening as it thinks it is.