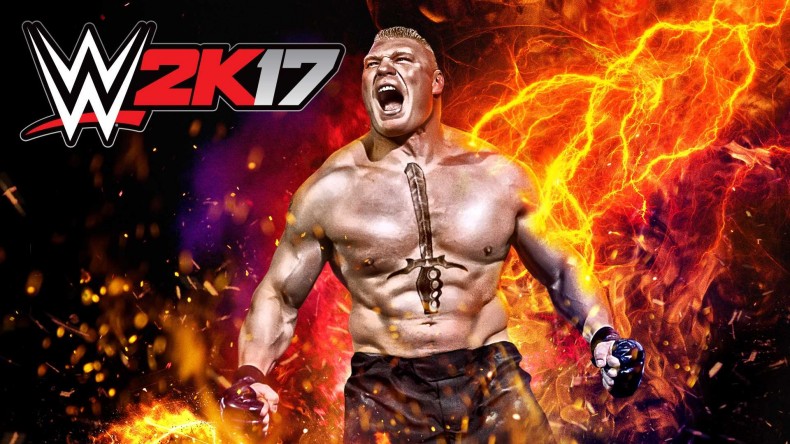 I’m quite worried that this review may transpire to be about 2,000 words, because there is just so much to say about WWE 2K17. Some good, a lot bad. WWE 2K17 feels like it’s at a crossroads, stuck between being an actual wrestling game and just remaining a mediocre fighting game. They’re heading in the right direction, but they’re stumbling with every single step.

We may as well start with the positives (though they often flow straight into negatives) with 2K17, the first of which being that it seems to be a vast improvement on recent entries in the series. The actual wrestling is the best it has been in years, with certain mechanics making sense and the moves themselves being incredibly well animated and having real impact. I’ve been playing in the presence of friends, and every time a head-adjusting closeline, skull-crushing piledriver or back-breaking knee drop landed my pals would wince. Which does go to show just how well replicated the moves are; it really does seem like they’ve motion captured each wrestler to get the moves spot on. Elsewhere I really like the different minigames that are used in certain situations. Getting the line in the red area for a kick out, the way you fight out of submissions by having to use the right stick feels like a thumb war and the different ways you can be eliminated or eliminate in Royal Rumble matches. All of them feel intuitive and help build the tension as if you were in the ring. Managing to get a last gasp kick out when the area is microscopic is a cause for mass hysteria, just like they are in real life. Unfortunately, these few mechanics are the only way that 2K17 succeeds in building a real sense of drama. The problem with in-the-ring battling is that the moves don’t really flow all that well together. In fact, the only time you can really ever get a good sequence of moves is if there is a streak of counters. Otherwise it just tends to feel rough and clunky, and that’s because 2K are still endeavouring to make WWE a fighting game rather than a wrestling game. As we all know, wrestling is scripted (* spoilers * the wrestlers aren’t actually fighting each other), so continuing to make a fighting game just makes little sense.

A prime example of how 2K is stuck at the crossroads is with the introduction of the match rating system, which I like a lot. It gives the match you’re having a star rating, and that rating will go up depending on aspects such as move variety, taunts, finishing moves and building the drama. I think that’s a great idea, but when it’s a fighting game which doesn’t allow you make the match go how you want it, it feels underutilised. I can’t do things like squash matches, heated tags, or undeserved victories, and the only way to claim victory is to batter the opponent more than they batter me.

Before I do dive head first into the murky waters of all that is bad with 2K17, I should give the dev props for just how big the roster is. It’s absolutely jam packed with pretty much everyone on Raw and Smackdown, and it has a healthy helping of NXT superstars too. That’s not to mention the countless legends and their different characters, the several managers… there are just so many characters to play about with. It’s also the best the wrestlers have looked (if you ignore long hair) on 2K in years. I couldn’t help smiling to myself as I watched the brilliantly renditioned entrances of The New Day and The Wyatt Family. However, with the reality of Wrestlemania being the cutoff point and with how rapidly things move in WWE, the game already feels very much out of date. There’s no brand split, no Smackdown belts, no Universal Championship, no Rhyno, no Club and a few other glaring admissions. This can be half rectified in Universe Mode and using the download creations, but it doesn’t feel the same. Especially since, even though you can download player creations of wrestlers which look a lot like their real life counterparts, the lack of theme music and dedicated movesets does render it rather irrelevant (also, when creating a wrestler the move sets are far too complex and it’s all very overwhelming). Having a match between Harambe and Donald Trump was a laugh, though.

So, *deep breaths*, while I have found a certain amount of enjoyment with 2K17 in moments, especially when I’ve been able to work a good match with friends, there is just so much going wrong with it as well. First of all, and easily 2K17’s most grievous sin, is that the commentary is diabolically bad. Just like the occasional voiced entrance, it’s painstakingly obvious that comms have been recorded in a studio, and why they aren’t just taken directly from shows I will never ever know. They completely fail in their job of heightening tension, as they meekly react to every move as if they’re watching a snail race. It seems that the only reason commentary is there at all is to tell you that you need to punch someone more before trying to pin them. And then we have Jerry “The King” Lawler, who is the most painful result of that aforementioned Wrestlemania cut-off point. Lawler no longer commentates on WWE and that’s because he is A, awful, and B, horribly sexist and perversive in everything he says. WWE is going through a “Women’s Revolution” at the moment, in which women are treated as A-list superstars and legitimate wrestlers rather than just playboy models. I don’t care if Lawler is meant to be a heel commentator and he should say horrible things, the suave Corey Graves manages perfectly well without stooping to such remarks like “I love when a diva experiments”. So, whether it’s 2K’s fault or not it matters little, the fact that this man’s voice, and the fact that Women are still called “Divas” which no longer happens, feels like a massive backwards step for a company that has been trying so hard to be progressive. It’s genuinely off-putting and makes me not want to play with the amazing female competitors because I just don’t want to hear gross comments.

Perhaps the biggest disappointment in WWE 2K17 is MyCareer Mode , which promised so much yet delivered so little, further showing that 2K have great vision, but shocking execution. The premise for MyCareer Mode is great: you start off training at the Performance Centre working with an actual WWE coach, then you move to NXT putting in the hard graft before making it to the main roster and eventually claiming gold. It sounds ace, it should have been ace, but it really isn’t. The whole point of wrestling, the reason why people watch it. is for the stories and characters. They can be incredibly basic and stereotypical, or unique and quirky, but if done well they’ll last in fans’ minds for a lifetime. Character. Story. The two most fundamental aspects of wrestling, and the MyCareer Mode fails miserably to capture either. It tries, though. It has introduced a promo system this year, with dialogue options to decide whether you’re a face or a heel. Sounds good, right? But there’s no fucking voice acting! Not even a generic dudebro voice that would at least give something to your created characters. Instead a voiceless Renee Young and a voiceless you will stand while text comes on the screen and the character takes far too long to say what he’s saying. All in deathly silence. It’s so jarring and may as well not have been there at all.

That was the feeble attempt to create character, and the stories fare even worse. The matches I compete in are so random and gunshot that no stories are even told. One moment I’m fighting Sami Zayn (who’s a much higher overall than me, so why?) then I’m in a tag-team with my absolute twat of a partner (who is literally introduced as “The Player” and also looks like the Silver Surfer during my entrance), who never tags me in and always loses because he’s shite. Then I’m getting attacked by Hideo Itami, then I’m fighting a regen, then whoops! Here’s Sami Zayn… again. There’s no rhyme or reason to it in the slightest. I’m trying to be a heel and doing evil things, which mercifully the fans are booing me for, but nothing ever happens after I beat someone up after a match. There’s no reaction, in a story sense, to my deeds. Nothing ever changes. When the story isn’t good in Wrestling or the performers aren’t at least exciting, people tend to lose interest, and I suppose in that sense WWE 2K17 is very realistic.

Elsewhere, wrestlers aside, the game does look very dated, especially with crowds, commentators, textures and other such things. 2K17 doesn’t explain itself very well at all, even the in-game manual didn’t tell me how to pick wrestlers up off the floor, how to drag them when they’re on their feet, how to lift them onto a turnbuckle and plenty more, and that makes a lot of spots hard to do. Thankfully a friend was able to give me that vital info. The menus were an obvious afterthought and, with such a long list of wrestlers, some segregation really would have been nice. Same old issues exist too, such as when a wrestler ends up kicking thin air, little wrestlers are somehow able to pick up giants (I saw Enzo and Big Cass do their finisher in reverse), and finishing moves don’t feel all that satisfying.

You know what? I think this review is one of the hardest I’ve ever written. There’s so much in WWE 2K17 which is great and you can see what they’re trying to do in other areas too, but a lot of the execution is so awful that it overshadows the good. I’m genuinely conflicted because I’ve had a lot of fun with it, but also shaken my head and sighed on umpteen occasions. 2K are, very slowly, moving in the right direction and there is a lot of enjoyment to be had here, especially with some tension-building mechanics and truly well animated moves, but that aside it just doesn’t really seem to “get” wrestling. It doesn’t get the soul.

Some of WWE 2K17 is brilliant, especially with the well animated moves, some new mechanics and a huge roster. Sadly, however, all the good is undermined by awful presentation.