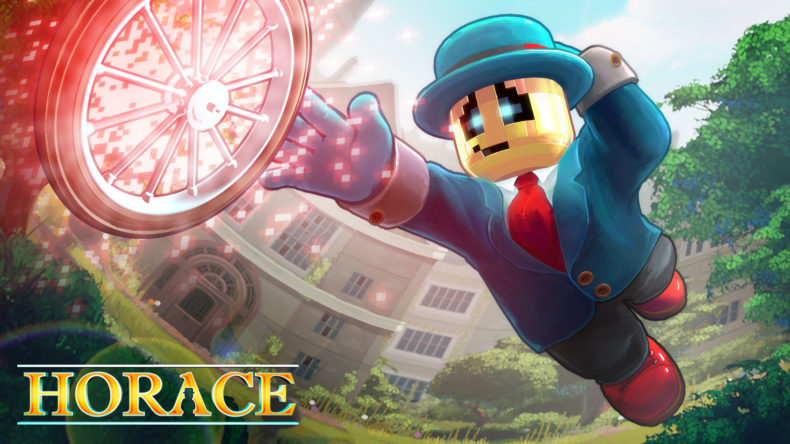 Pop culture references have been hidden among our favourite video games for generations. Finding an Easter Egg from the developer’s favourite movie is a surefire way to delight a film buff, be it Indiana Jones’ refrigerated remains in Fallout 4 or a single red balloon in the sewers of Far Cry 5. It’s not uncommon to see a sneaky reference or two hidden in even the biggest budget titles, but some take it a step further. The adult adventures of a foul mouthed squirrel on the Nintendo 64 for example, was made up of one pop culture lampoon after another. It was this love of referential humour that immediately drew my attention in Horace.

In Horace you play as the titular robot butler, as he narrates his extraordinary life. Activated and raised by a kind and wealthy gentleman referred to only as The Old Man, Horace is taught all about humanity as he discovers his place in the world. Alongside his master, Horace also begins his metallic life with a host of other family members and staff on the grounds of the mansion. It’s a heartwarming introduction to the world of Horace as you meet all manner of interesting characters, from a hoarding old lady to the odd job man with a criminal past. 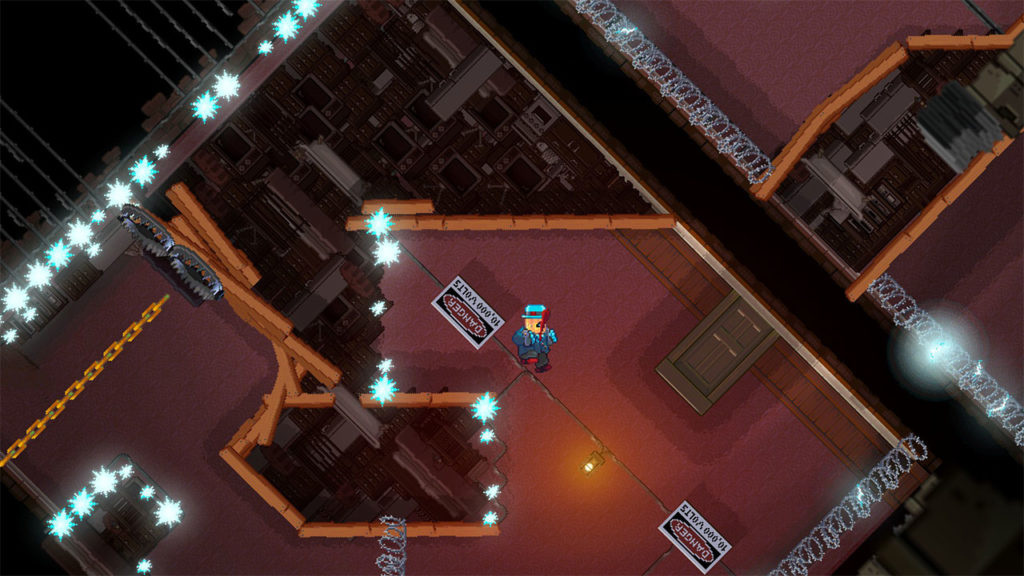 These opening hours are slow paced, broken up only with occasional tutorials to get you accustomed the platform gameplay. These brief glimpses into the 2d obstacle courses yet to come are enjoyable enough, but it’s the story of our autonomous hero that will keep you going through the early game. It doesn’t take long for disaster to strike down Horace’s idyllic life, and after unfortunate circumstances lead to him being deactivated, he awakens in the ruins of his old home.

The world has changed a lot since Horace was last active, his family is gone and robots are mistreated by much of society. In this bleaker land, Horace decides that alongside cleaning up junk that he must find his former friends and find out what happened in his absence. Although this sounds like a pretty serious story the comedy, references, and Horace’s cheery attitude more than make up for the misery.

Almost immediately when you start playing Horace, you’ll be bombarded by British references. From characters named after presenting duo Ant & Dec, to former Coronation Street extras, if you have any experience with the popular telly of the BBC and ITV, you’ll be constantly spotting something you recognise. This isn’t to say that US pop culture is ignored, but the developers’ televisual heritage is certainly the focus. 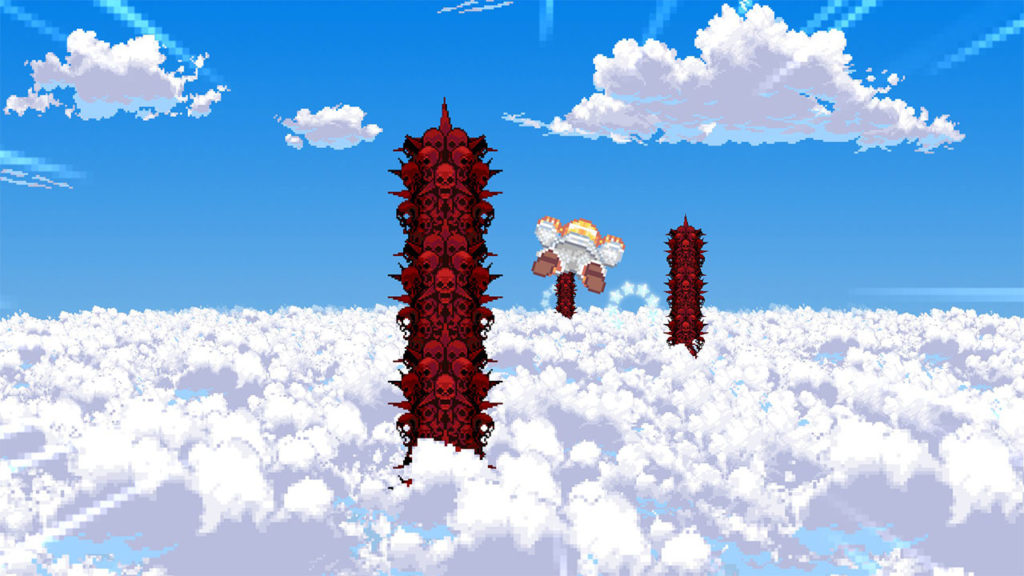 Pop culture isn’t relegated to the narrative sections of Horace. Environments, mini games and background NPCs constantly pay homage to other forms of media. There’s a level set in a psychedelic Alice in Wonderland, a Ferris Bueller themed Daytona spoof called Dayoff, and a town with the entire cast of Friends sauntering in the background. I actually screamed in excitement when selling some of my scrap, when I was asked to put it inside Bertha from the 80’s stop motion children’s show of the same name.

Outside of the narrative, Horace is at it’s core a platform game. Running and jumping your way through the environments as the butler begins with the simplest of mechanics, but soon the focus shifts to using gravity boots to walk on walls and ceilings (which unfortunately made me feel motion sick early on). In its 12+ hour run time, you’ll gain access to all sorts of game changing upgrades and powers. There are the Atlas gloves that enable you to pick up and throw objects, upgradable shields that can be turned on and off depending on if a section looks tricky, among a host of other platforming powers. You can even purchase more improvements at shops, to make collecting junk quicker or to improve your ability to spot items.

Although you’ll do a lot of avoiding pits and bounding over enemies, calling Horace platform game doesn’t feel right. Through the entirety of the game, stages entirely shift the genre in interesting and outlandish ways. There’s a level where you have to drive a car and shoot cops as you rescue a man from prison, there are lengthy stealth segments; even psuedo open world areas where you’ll need to earn money to buy train tickets by doing odd jobs. The sheer amount of variety in Horace rivals anything I’ve seen in even AAA games, let alone from a 2 man team. 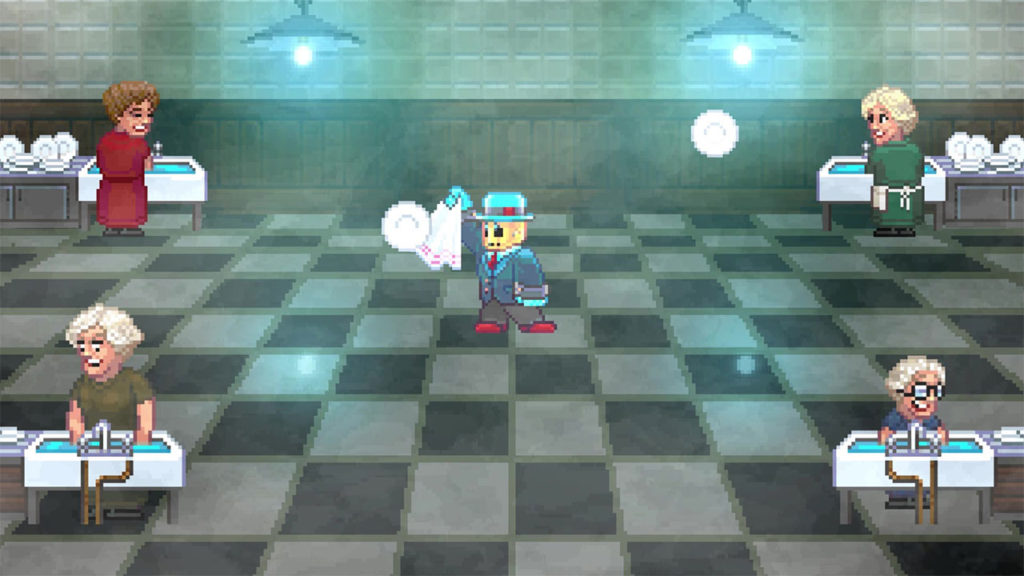 In some of its best moments, Horace feels like a string of mini games held together in a platforming framework. You’ll never go far without stumbling across an arcade (complete with a Street Fighter character mashing on the buttons in the background) packed full of ridiculous takes on coin guzzling classics. There are also mini games that you need to beat to progress, be it a match of Tennis for 2 with the old man or Rock Band style rhythm game with a delinquent. Not all of these short gameplay shifts are particularly fun to play, but they are all packed with charm and usually a chuckle or two.

The one slight issue I have with Horace is a graphical one. The pixel art looks lovely from a distance, but in cutscenes there’s a tendency for the camera to zoom in so close to the characters that it’s hard to tell what you’re looking at. It’s not a huge problem, but it was always slightly jarring when the narration says that one of your friends is smiling when I didn’t realise I was looking at his face.

Horace is a game unlike anything else I’ve ever played. Stuffed to bursting with references, mini games and genre shifts, even in its relatively long runtime I never once felt bored. A few graphical and motion sickness issues aside, Horace’s heartwarming story and unbelievable charm shine through and make this genre defying adventure a must play.

A genre shifting game packed full of charm and references, Horace is a robotic adventure that must be experienced to be believed.