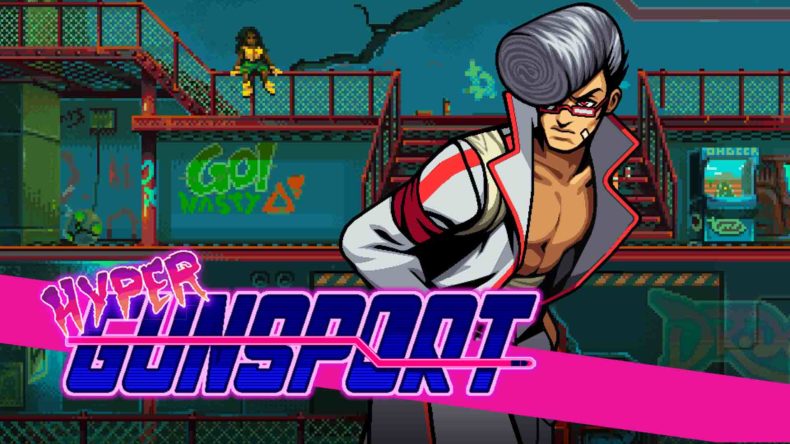 The wonderfully idiosyncratic Necrosoft originally conceived Gunsport as an exclusive for the short-lived Stadia service. As that platform bit the dust, they managed to preserve their work by sneakily lumping it in with the Steam release of its sequel-cum-revision, Hyper Gunsport. We don’t get the original on this here Switch version, but what we do get is their boosted SFII Turbo presentation of their super cool future-sport actioner. It reverentially doffs its cap to genre classic Windjammers, adding guns, volleyball tropes and a surprisingly captivating bit of world-building and characterisation to make it their own.

You are transported into a dystopian future with a unique twist. Instead of the usual post-apocalyptic scenario full of mutant zombies and harrowing violence, here is a planet where conflicts and political machinations are settled not by going to war or terse diplomatic discourse but by participating in the deceptively pacifist sport of the title. The guns are not used as weapons, but to propel and alter the trajectory of a ball across the net, and score points by hitting one of the three goals that are positioned behind your opponents. 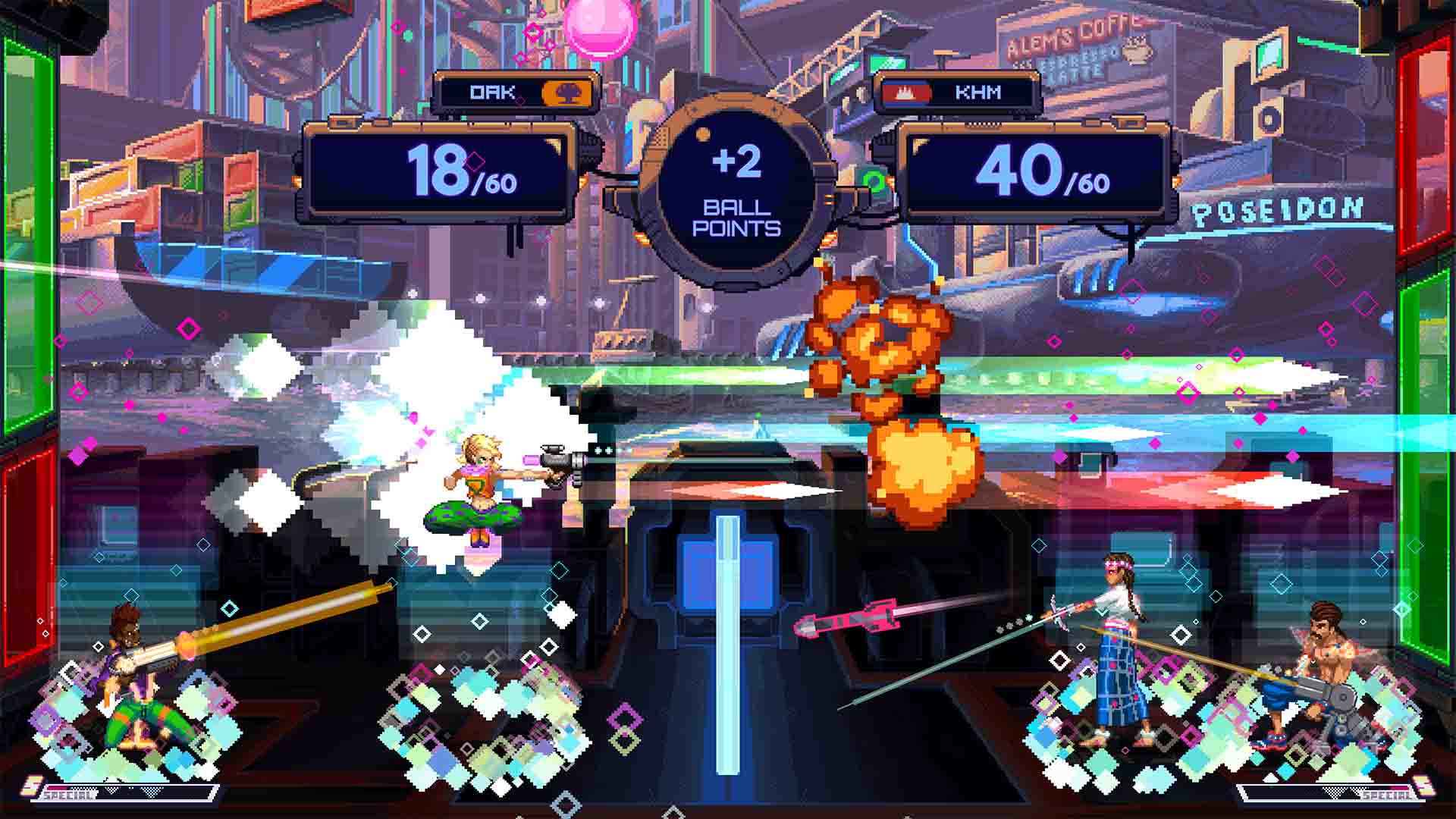 Each team has a keeper and a striker. The goalie is positioned at the back of the court and cannot move, but has a shorter reload period between gunshots. The striker can move horizontally and jump as well as being able to shoot. If both the keeper and the striker aim a well-placed shot at the ball in tandem, it creates a “focus” shot – a super powered effort that has more of a chance of penetrating your opponents’ defences. The teams all each have a special which can be employed once a gauge is filled. These vary from duo to duo and add an extra strategic consideration of when to use them for best effect, much like the trick shots available in Windjammers.

The teams are super diverse and draw from nations not usually seen in videogames, such as DR Congo and the fictitious independent state of Bay Area locale Oakland. All of the characters are beautifully designed and could have walked straight off a Neo Geo game from 1994. The cutscenes and pre-post-match banter is superbly written and tells a bit of a story connected to each team. The music and voiceover work is similarly excellent. 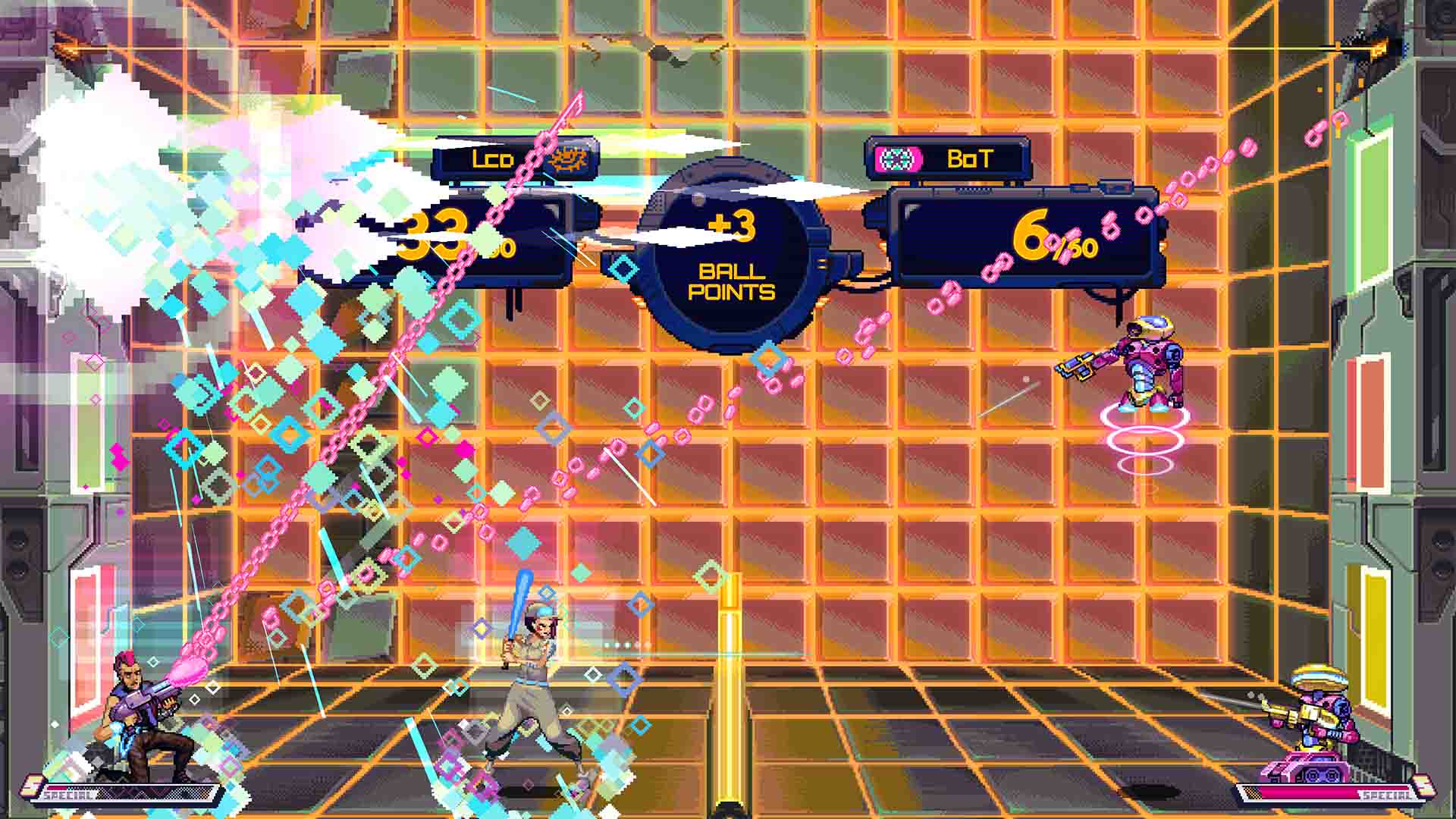 Matches are first to 60 points, with modifiers to keep things interesting. Each time the ball crosses the central net the potential score multiplies. The three goals each have different points values – the top and easiest one to hit has a base score of one, the middle three, and the tricky to nail lower net giving a cool five points. Throw a decent rally into the mix and it is possible to rack up a double figure tally with one well aimed shot, lending the game a terrific sense of unpredictability.

The single player campaign is short but challenging, and features a number of different environmental modifiers along the way to freshen matches up, such as goals that open and close, and different ball types with associated gravitational effects. Aside from a few unlockable characters and colour scheme skins, there isn’t much in the way of unlockable rewards for completing the solo mode, but it is great fun while it lasts. The longevity to Hyper Gunsport will come from couch co-op and versus modes, where the fast paced and extremely fun action takes you back to the golden age of 16-bit gaming. It seems a huge oversight to omit any kind of online mode however, which is a big disappointment.

Hyper Gunsport is great in couch co-op and versus modes, where the fast paced and fun action takes you back to the golden age of gaming.