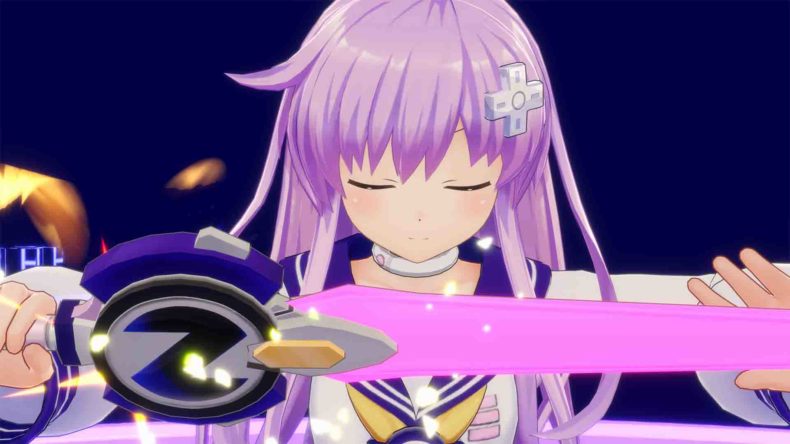 Neptunia games are (similarly to life) like a box of chocolates, you never know what you’re going to get. This long running series has been through many transformations, with games featuring third person shooting, character action, and a whole lot of RPG elements. The quality is always a roll of the dice too, with some of the titles getting by on fan service alone. Fortunately for me and the rest of the depraved fans, Neptunia: Sisters Vs Sisters is easily one of the better games in the series.

With the main Neptunia game console goddesses investigating some enemies over on the PC Continent, it falls to their younger sisters to deal with other issues plaguing Gamindustri. It doesn’t take long for these four gals to get in trouble though, and after being trapped in a mysterious pod they enter a two year stasis. Two years on the world is a very different place, with the biggest difference being the disappearance of self proclaimed main character Neptune. This means responsibility of her godly duties falls to Nepgear. 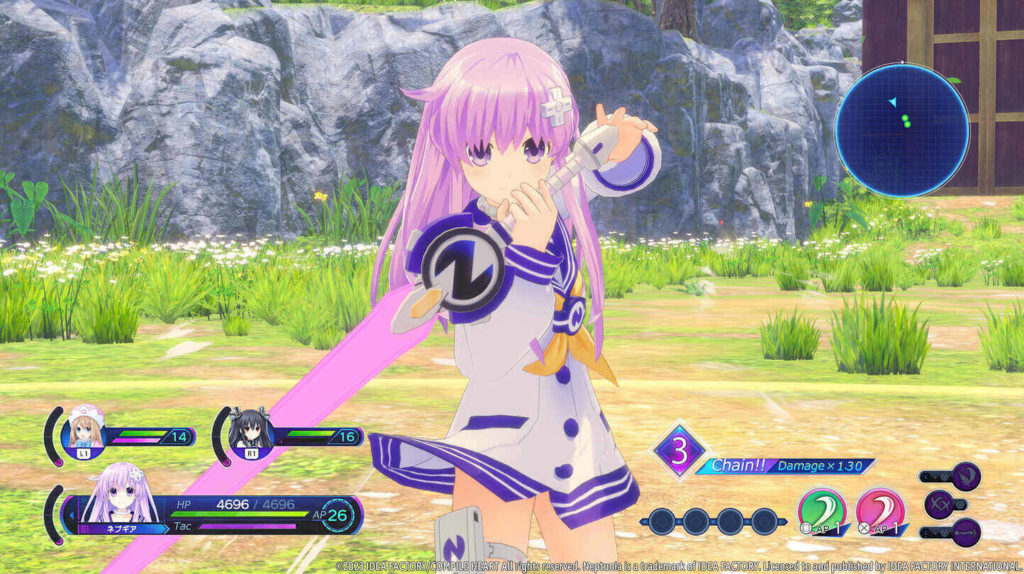 If you aren’t familiar with the Neptunia games, you should probably be aware that it’s all themed around gaming. All of the playable characters are based around game companies and consoles, hence the younger Sega sister Nepgear. It’s a bit ridiculous, but fairly ignorable in the grand scheme of things. The absolute best part of the narrative side of Neptunia: Sisters Vs Sisters though are the personal relationships. The younger sisters are all devoted to their siblings and adorable in their own right, and new characters you meet along the adventure all have their own motivations and charm.

You’ll need to band together with everyone you meet too, because the world of Gamindustri isn’t in great shape. The goddesses are getting worshiped less and less due to people being absorbed by a mysterious new brand of smartphone, and monsters called (I kid you not) Trendfluencers are spawning constantly. It’s up to your merry band of magical girls to deal with these baddies and save the day again, so get ready to do some rumbling.

Neptunia: Sisters Vs Sisters is an action RPG, with battles taking place in real time and you controlling a single character. Attacking enemies with your basic attacks costs AP (which fills up gradually) so when you run out of it with the girl you’re playing as, you need to switch to one of the other two party members and continue a combo that takes down the enemy. There’s also a dash that gets you out of harm’s way, as well as a special ability meter that fills slowly and can be unleashed for massive damage, healing or even buffs if the fight is looking like it could take a while. 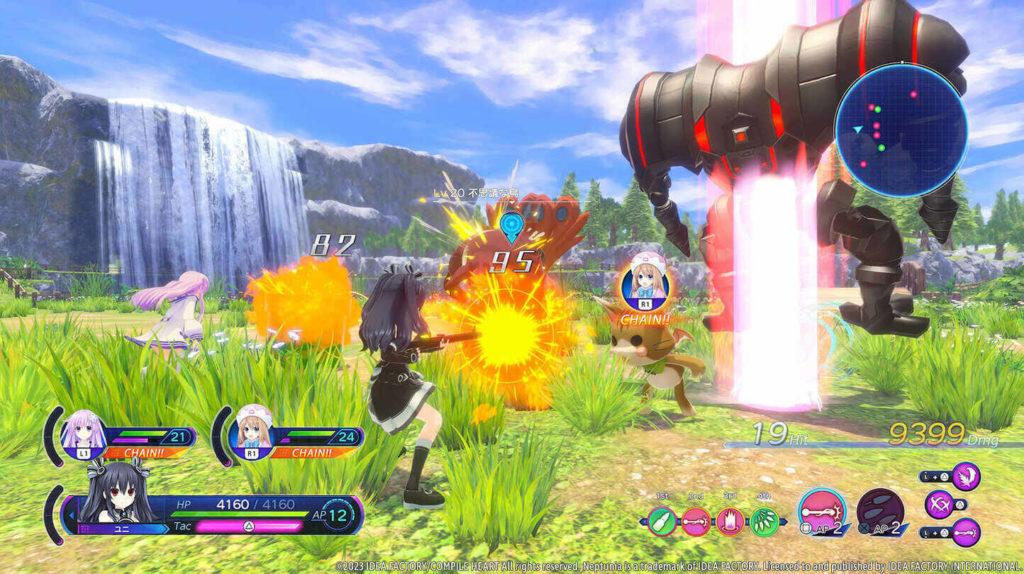 The combat isn’t necessarily unique, but it’s undeniably fun to wail on enemies with your swords, guns and staves until they fade into the ether. As the game progresses you’ll unlock a separate attack tree for each character so you can choose which move you use on the fly, as well as the usual Neptunia super powered (and less clothed) form that can be activated in a pinch to power up a whole bunch.

The main issue with Neptunia: Sisters Vs Sisters is just how easy the game is. There are a whole bunch of advanced systems in the game that honestly you barely need to touch. The individual moves of the combos your characters do can be changed for new attacks you unlock, and there’s so much depth to the system. Each move has a whole host of stats to think about involving how much they power up meters or stagger the enemy, and I barely bothered changing anything throughout the whole game. Initially I was just intimidated, but I also grew comfortable with the moves I had equipped and when I realised I was winning every battle pretty easily I just rolled with it.

The Disc system has a similar issue, although admittedly is still important to play around with. Discs are items that each of your girls can equip, which provide them with huge buffs in combat like extending your dash or making your meters fill up much quicker. You need to craft these yourself, by picking an NPC ally to make them, assigning an item as the base and seeing what pops out the other end. By completing side quests you’ll meet more and more NPCs and can make different discs for the party. It was within the first five hours that I discovered the combination of item and NPC that gave me a disc that boosted the EXP earned in battle, and I proceeded to make one for every character and didn’t open that menu ever again. 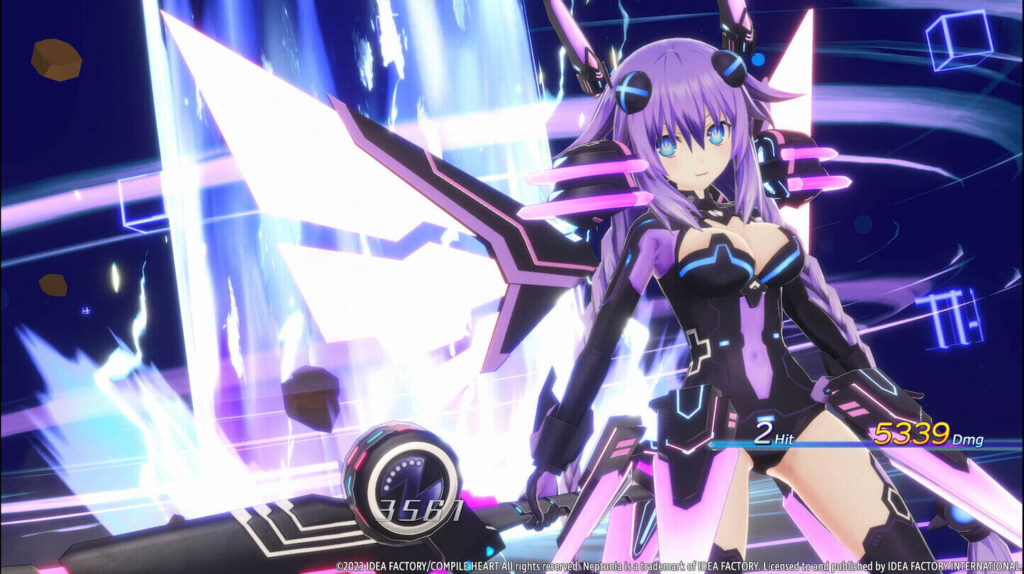 It might feel like I’m being a little harsh on Neptunia: Sisters Vs Sisters here, but even with systems you don’t need to touch it is fun to play. There are little elements that raise the game too, like the haptics on PS5. Every footstep you take makes your controller rumble in a really noticeable way, and the amount of time and effort that was put into changing this in different environments is very impressive. In a forest area I initally thought the haptics hadn’t been programmed correctly until I realised I was walking through long grass, and the moment I moved into a clearing the steps were back. It’s such a nice touch, and one that so few developers bother with.

There are some other issues outside of the balance of the game too, mainly regarding the dungeons you explore. Most of them are fairly straightforward (and slightly dull) combinations of corridors and passages with treasure and enemies to find and batter, but some are just awful. There’s a particular city level for example that is just a real pain to navigate because of these barricades you need to find a way around by going through buildings. At the end of it you’re treated to a towerful of simple box pushing puzzles that would’ve felt tedious and outdated twenty years ago.

Neptunia: Sisters Vs Sisters is a fun action RPG with entertaining combat, but a lack of difficulty prevents it from truly being a must play. There are systems that you just don’t ever need to touch to win, and alongside some dodgy dungeons and a slightly incomprehensible story the whole game suffers. If you are desperate for an RPG with compelling combat though you could do much worse, it’s just hard to recommend when there are so many lengthy alternatives to sink your time into.

Neptunia: Sisters Vs Sisters has wonderful combat and endearing characters, but a lack of difficulty and dodgy dungeons prevent it from being truly great.