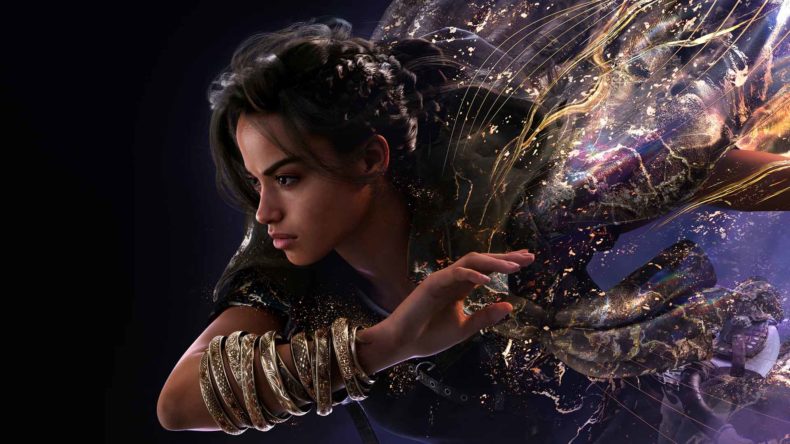 It might seem a bit cliché to say it, but Forspoken really does feel like two different games stitched together with wonky seams. One of those games is an open world action RPG with flashy, satisfying (albeit scrappy) combat and some wonderful traversal options, and the other game is one of the most banal, joy-sapping experiences I’ve ever pushed myself through.

You play Frey Holland, the kind of gobshite teenager popular in 90s suburban adventure movies. She’s a homeless girl from New York City (which she will remind the player and every nearby NPC roughly every eight seconds for the entire runtime), who was abandoned at birth and found in Holland Tunnel. One night after pissing off the local gang by ditching a stolen car, Frey narrowly escapes an attempt on her life and comes into contact with a sentient vambrace, which transports her to the fantasy world of Athia.

Once there, Frey soon learns that the land is in the grip of a terrible corruption called the Break, created by the Tantas, four powerful mages who once defended the world until they fell into madness. This is all explained by the vambrace, which Frey names Cuff (despite it clearly being a bracelet or, of course, a vambrace). Cuff is voiced by character actor Jonathan Cake, who brings a dry British humour to proceedings that is sorely needed – even if he and Frey do repeat the same four dialogue exchanges to the point of apoplexy. 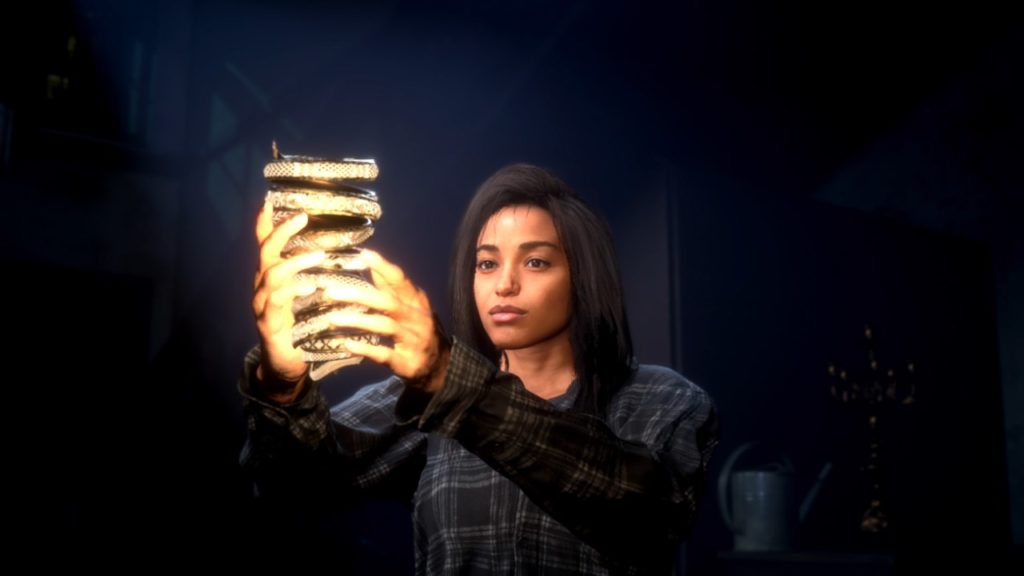 The story itself isn’t the issue. Forspoken’s plot is fine, as fantasy plots go. Frey has unexplained magical gifts that rival the Tantas’ own, and becomes the default protector of the city of Cipal by being in the wrong place at the right time. Her actions inadvertently lead to the rescue of one of the city’s beloved elders, while also bringing the wrath of the Tantas down upon the people. The issue here is that no matter what’s happening to her or because of her, Frey is an insufferable brat. You could switch her backstory with that of a selfish rich girl and it wouldn’t make any difference.

All she talks about for the entire game is going home, despite the fact that when she left Earth she brought with her literally everything she owns – the clothes on her back and a mobile phone, which inexplicably keeps its power for the entire game so she can take landscape pictures. Seriously. There are moments where she almost becomes likable, and she certainly has a few choice lines delivered with confidence and style by the voice actor, but most of the time I just really wanted her to shut up. And she also swears to the point of parody, which never stops feeling out of place. 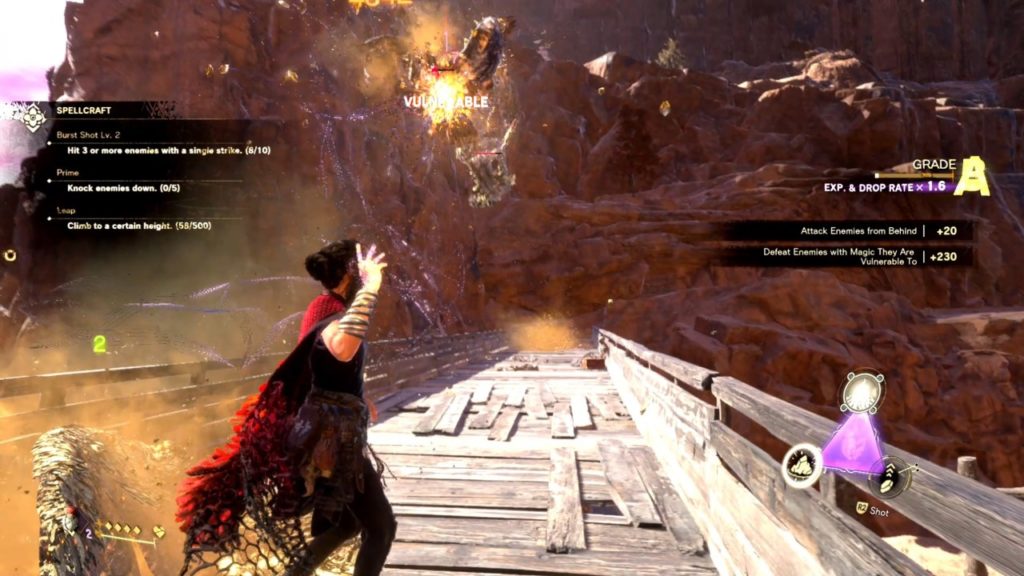 To call Forspoken confused is a bit of an understatement. Its tone is all over the place, while the pacing is shocking. Most of the first five to eight hours are spent walking slowly around Cipal, with few interesting moments. There are side quests called “detours”, which may honestly be the most boring example of the element I’ve seen. An early example is a tour, where you follow an NPC around the city to look at nothing of interest, while Frey talks about the central crisis of the story like something she ought to get back to when she can be bothered.

Cipal is a lifeless, beige, sinkhole of a city with a few shops, a scattering of NPCs who can be contextual-button-prompted to utter something vaguely praising or damning, and cats you can follow to collect Poppets, little gnomes you can then trade for rare items at one of the aforementioned merchants. When you’re in the city you can’t employ Frey’s magical parkour, and there are moments throughout where you must stop and talk to Cuff. Literally stop, because the game won’t let you move until you’ve either exhausted the options or given up and accepted that you’ll just never know whatever exposition he was about to mansplain at you. 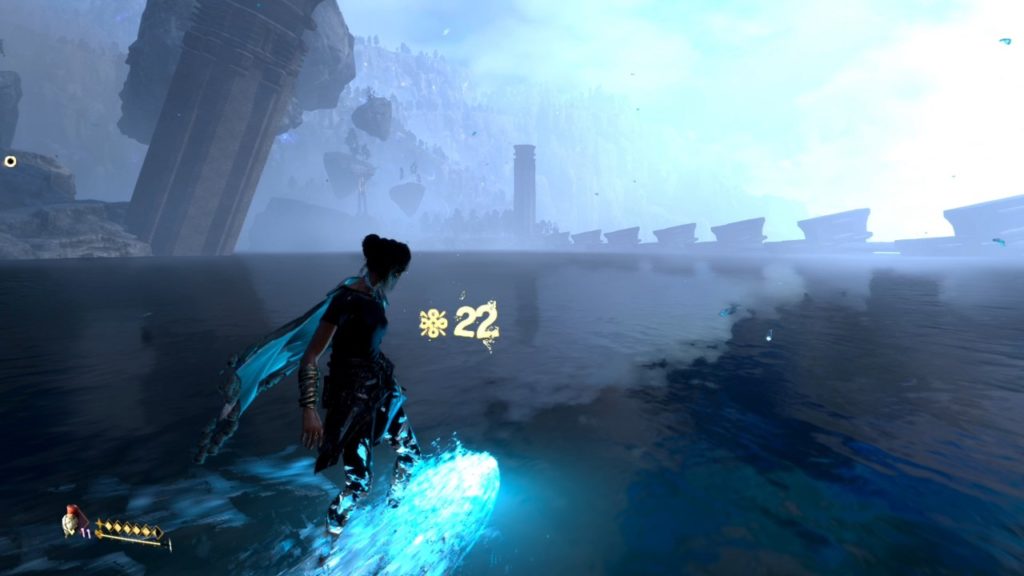 One section in the city requires you to talk to six or seven random NPCs so that they can each deliver precisely one line of dialogue apiece, another requires you to find and feed several specific sheep in a field full of sheep. It’s maddening, and slightly mind-boggling. As soon as the game lets you free of the grind and drag of Cipal, the world comes alive with speed and colour and genuinely exciting combat with a host of magical beasts and villains. If you can get through the first five to eight hours (and a few more sections a little later), Forspoken becomes an entirely different game.

The magic of Forspoken is its saving grace. Frey has the ability to not only weave her own purple magic, but also to absorb the elemental magic of the Tantas she finds herself in conflict with. There are tons of spells across several trees, all of which can be upgraded with Mana, or enhanced by completing challenges specific to each. You have combat spells and support spells. The former deal damage and debuff enemies, while the latter also buff or heal Frey, or can summon things like magical turrets.

Cooldowns are spell-specific, so you can cycle through your abilities or even switch trees and utterly exhaust all your support options while juggling your various combat spells. Holding down the right trigger will boost the chosen combat spell up to the highest unlocked level, and each level offers a different effect. 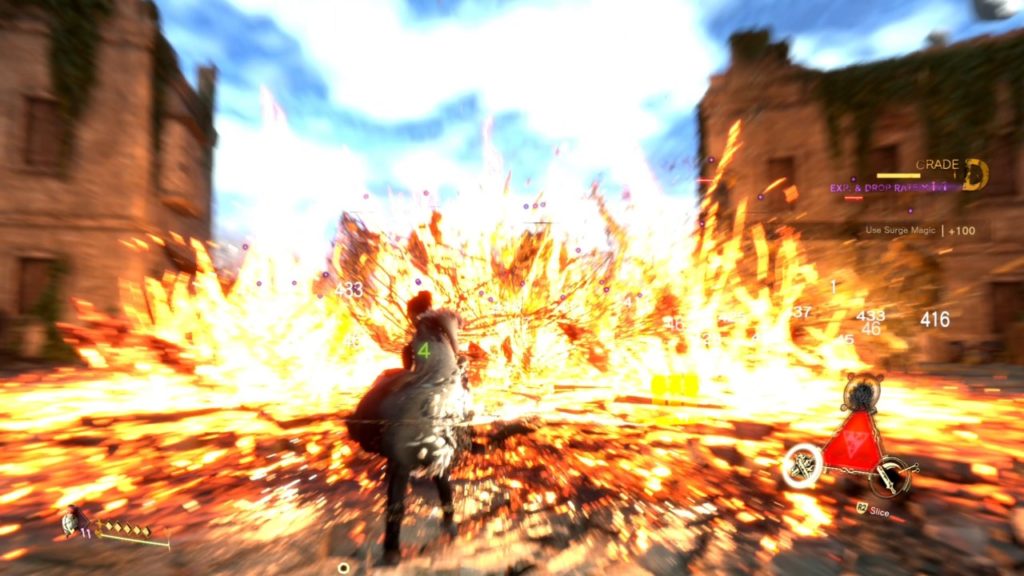 Alongside these are traversal spells, which allow Frey to employ her magical parkour to tear across the landscape like a streak of buttered sunlight. There’s a hook shot, a bounce jump, even a magical surfboard for speeding across the surface of a lake. Each one enhances the open world gameplay, making it easier to reach the scores of icons scattered across the map. These represent labyrinths, towns that need liberating, boss fights with mutated animals, belfries that give you a look at the surrounding landscape, or Pilgrim’s Refuges, where Frey can rest and craft, or pet magic kittens with wings and horns.

There’s so much colour and variety and excitement to be had out in the world of Forspoken that it almost balances out the deathly dull atmosphere of the hub city. Frey remarks on what she sees and Cuff educates her, and as she makes her way towards boss fights with these powerful beings, her character does slowly begin to shift – though the writers never seem sure how to handle character growth or development. Every time she seems to be evolving, she just starts swearing and whining again. 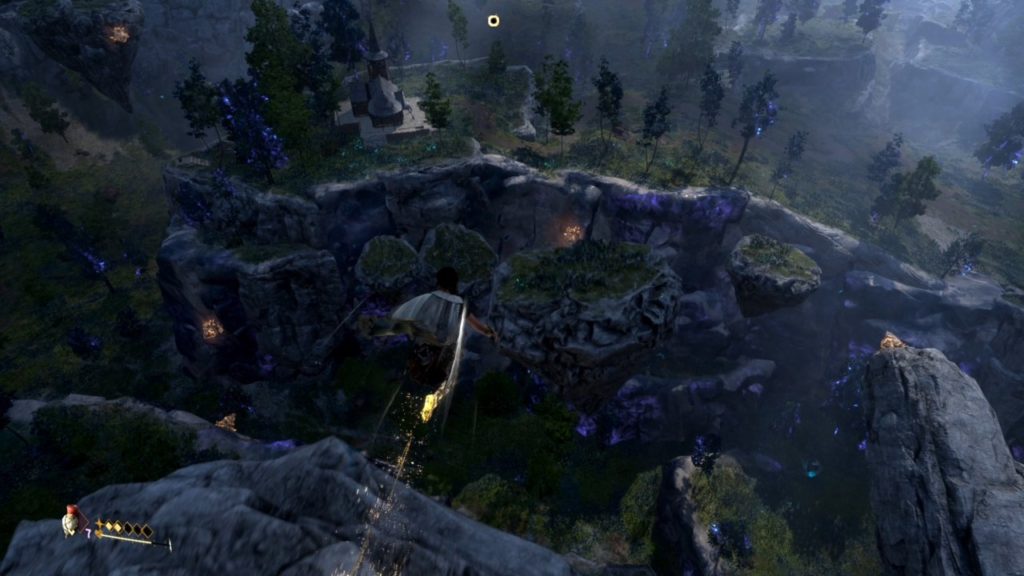 Thankfully, the world is beautiful. It’s huge, varied, gorgeous in places. The lakes of Avaloet are particularly striking, and when you find yourself inside a Break Storm, barely able to see, beset on all sides by foes, it’s stunning. Frey’s magic is not only satisfying and empowering to use, but it looks great every time.

The world is perhaps too big, though. There are tons of things to find like cloaks and necklaces that enhance Frey’s powers, or nail designs that impart powerful buffs to her survivability. Athia is filled with danger in the form of corrupted animals and the Tantas’ minions, some of whom are annoyingly damage-spongey. There’s an issue with difficulty for sure, because even on the default setting it was incredibly easy until the final third, when the difficulty suddenly sky-rocketed.

Also, Forspoken has a habit of telling you how you should be feeling, or how hard you should be finding things, instead of making you feel those things for yourself. When you fall a good distance, for example, all you lose is stamina, but Cuff screams like he just dropped his keys down a drain. Then you get up and dust yourself off and carry on and it just feels awkward.

This is a game that almost seems terrified to let you explore its world alone. It seems to want to hold your hand through the entire adventure, and so in those moments where it finally takes the training wheels off the first thing you do is fling yourself down the nearest steep hill headfirst. These moments are messy and chaotic, but also cathartic and compelling. Despite my reservations about the storytelling and the characters, I kept coming back for the combat and exploration. The sense of scale is immense, and I became hooked on finding all the cloaks, necklaces, nail designs, and hidden spells. It won’t wow anybody used to open world busy-lists, but it’s enjoyable and pretty to look at.

It’s difficult to recommend Forspoken as a complete experience. Every positive comes with caveats that can’t be ignored. The world is nice to explore, but soon becomes a little repetitive. Combat is exciting until the game drops a damage sponge on you and you spend ten minutes banging your head against it. The story is intriguing but the writing seems hell-bent on forcing emotional responses instead of earning them. There’s something here to get stuck into for fans of open world adventures, and Forspoken isn’t without its charms, but like Frey herself, it’s often its own worst enemy.

There's something here to get stuck into for fans of open world adventures, and Forspoken isn't without its charms, but like Frey herself, it's often its own worst enemy.